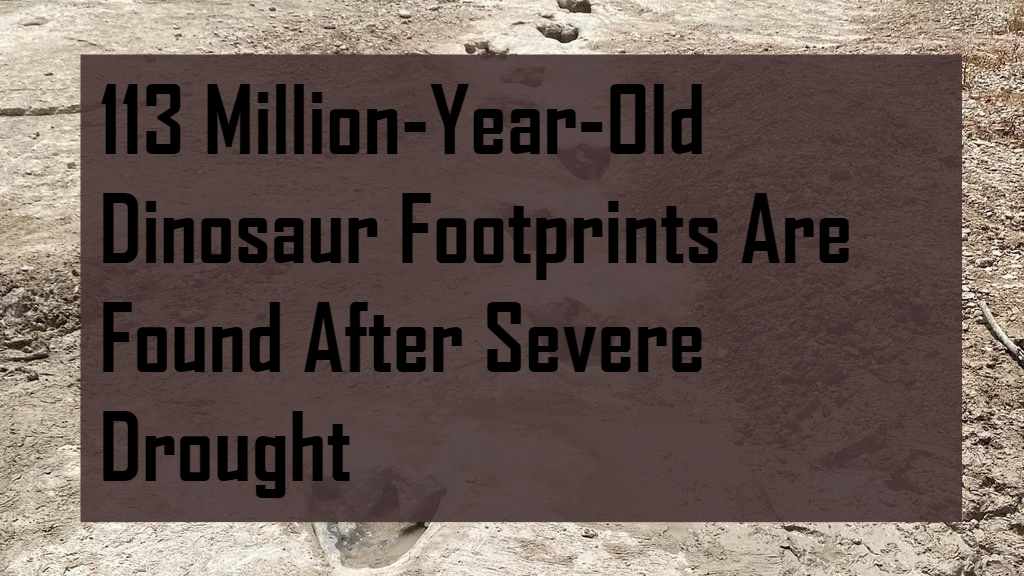 The 113 million-year-old dinosaur footprints are found after severe drought in a dried-up river bed in a park in Texas.

You might have just heard something about these dinosaur footprints.

But, here is a detailed look.

In a statement on Monday (August 22, 2022), Dinosaur Valley State Park in Texas said that 113 million-year-old dinosaur footprints are found after severe drought. 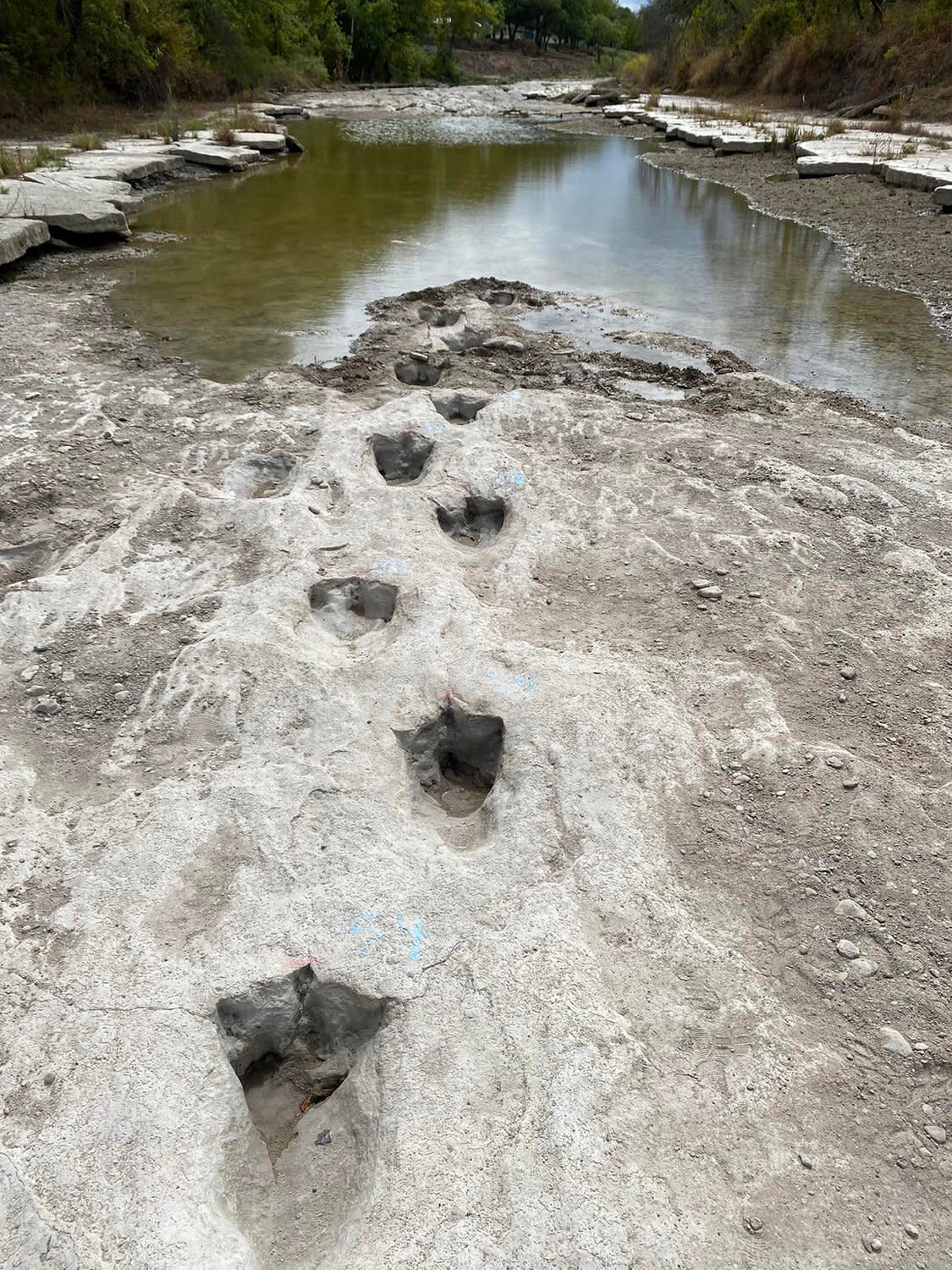 Because of the severe drought conditions, the riverbed of the Paluxy River was all dried up and it led to the discovery of these millions of year old footprints.

The single acrocanthosaurus's tracks had not been observed in more than 20 years.

Due to extremely dry weather, evidence of a long-dead Texan was discovered in the west of Dallas.

Sweep a little bit of the dust and dirt away, this is what you'll find: dinosaur tracks,

Three large toes that spread out from the heel may be seen in footage of the tracks, evoking images of Jurassic Park.

Actually, Acrocanthosaurus lived in the Early Cretaceous, a little bit after the Jurassic.

According to the state park's website, tracks there were originally spotted in 1909.

By the 1930s, palaeontologists had determined that the tracks in the park belonged to theropods, including T. rex and Acrocanthosaurus, and sauropods, including the well-known Brontosaurus.

Dinosaur Valley State Park is located around 70 miles outside of Dallas in the year 2022.

However, according to the park's website, during the Early Cretaceous, this region was on the edge of an ocean and covered in mud that attracted dinosaur footprints.

The drought monitor run by the US government says that the area of Texas near Dinosaur Valley State Park is in a "severe" to "exceptional" drought.

This dry spell is a component of the continuing "megadrought" that has affected the southwestern US for more than 20 years.

This is the region's driest time in at least 1,200 years, according to new research.

The drought in the southwest has also unearthed other long-forgotten truths that weren't quite as old.

This summer, authorities in Lake Mead discovered five sets of human remains, including one that is thought to be the victim of a crime from the late 1970s or early 1980s.

The current megadrought is being caused by a climate problem, and as the earth continues to warm, scientists predict that droughts will become worse and more common. 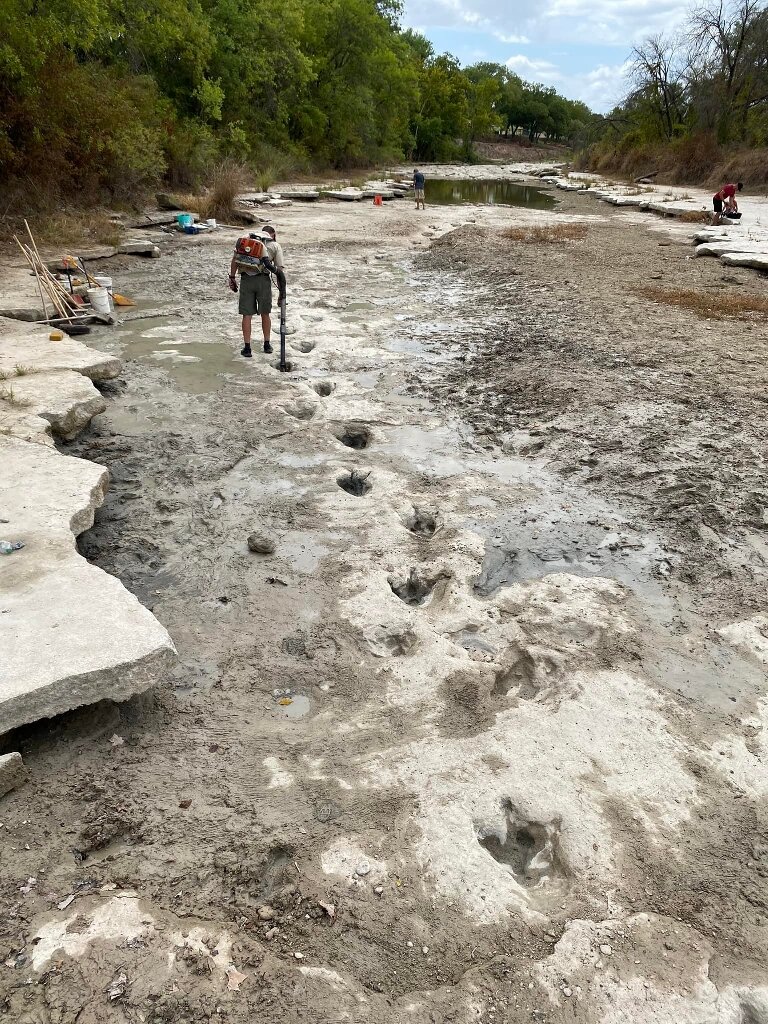 A man investigating the dinosaur footprints found in a dried river

In addition to the drought, Texas has had many heatwaves this summer, with temperatures often going above 100 degrees Fahrenheit (38 degrees Celsius).

This week, strong storms in Dallas flooded a lot of roads and killed at least one person.

The dinosaur footprints that were found are a matter of confusion for some people.

This is what professionals have to say about this.

Acrocanthosaurus leaves most of the tracks that have lately been revealed and found along the river in the park. This dinosaur weighed around seven tons and stood about 15 feet tall in its adult form.

According to Garcia, Sauroposeidon, another species that left footprints at the Glen Rose, Texas, park, would have stood around 60 feet tall and weighed 44 tons as an adult.

The recently discovered footprints are visible as deep grooves in the murky riverbed that are several hands wide in a video that the park released on social media.

Most of the time, normal weather conditions cover dinosaur tracks with sediment and water, making them harder to see.

Due to the extreme drought this summer, most of the river in the park has dried up completely.

This is the latest long-kept secret to become public as water bodies around the world have dried up because of the drought.

According to the US Drought Monitor, Texas experienced drought last week in two of the most severe categories in more than 60% of the state.

Recent heat waves in the state also caused temperatures to soar into the triple digits, putting millions of people under extreme heat alerts.

The human-caused climate crisis has also made it more likely that there will be more dramatic changes between drought and heavy rain, like the flash flooding in the Dallas area this week.

Garcia says that most of the time, the sand and water in the riverbed cover the dinosaur footprints, making them harder to see.

Garcia said that the process helps protect the rails from erosion and other natural wear and tear.

Since rain is expected, the tracks are expected to be buried once more.

Dinosaur Valley State Park will continue to protect the 113-million-year-old trails for people living now and in the future.

The traces are only the most recent findings made by declining water levels brought on by drought both domestically and abroad. 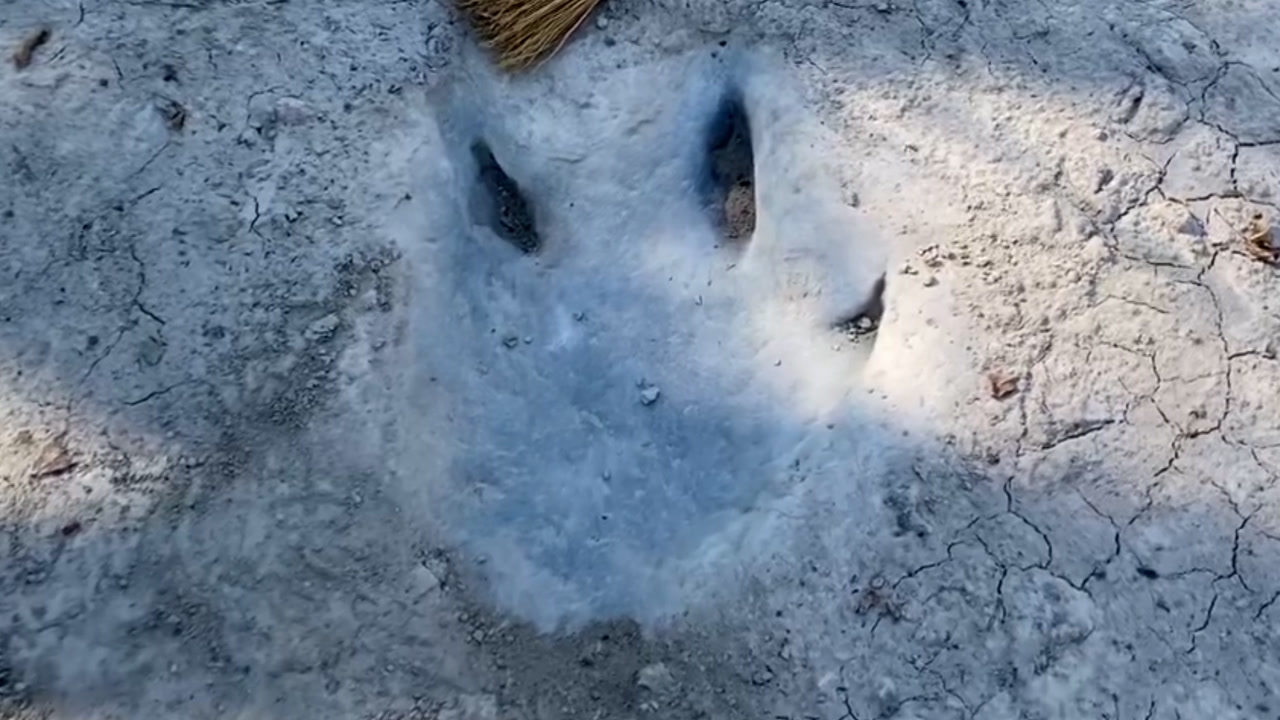 As the reservoir has decreased to around 27% of its maximum capacity in recent months, numerous sets of human remains have been found at Lake Mead in Utah.

On the dry Danube River in Eastern Serbia, many German warships still carrying explosives were found.

A prehistoric stone circle called the Spanish Stonehenge was found in the Valdecanas reservoir in the countryside of Spain.

Buddhist statues that are thought to be 600 years old were also discovered in the Yangtze River.

There are many dinosaur tracks at Dinosaur Valley State Park, largely from extinct sauropods and theropods, but this is the first time these specific footprints have been discovered.

Dinosaur Valley State Park's website says that many of the theropod footprints in the park don't have the typical three-toed pattern.

This is because the footprints were made in soft, deep mud, which buried the toe impressions.

Both species were among the last dinosaurs to perish 66 million years ago when a massive asteroid impacted Earth.

A prehistoric cousin of the T-rex was Acrocanthosaurus atokensis.

A Reddit user shared information about the place where these footprints are found,

"This is close to where I live at Dinosaur Valley State Park. It is a popular place to go if you want to see fossilized dino footprints.

These are just a new set of prints that were exposed due to the drought."

A Reddit user RemoveTheBlinders shared how these footprints were preserved so perfectly,

"About 120 million years ago, soft, muddy lime sediment was deposited in bays and lagoons on the west shore of a shallow sea.

Groups of dinosaurs walked here across the soft mud while it was still wet.

If you try walking in soft mud, you can make the mud squish out from under your feet and between your toes just like it did for the dinosaurs (see photo).

Fine clayey and silt sediments washed in from land areas to the north and west and quickly buried the tracks.

Erosion of the Paluxy River has exposed these sediments, easily stripping off the shale but leaving limestones in ledges to form the hard floor of the river"

Are The Dinosaur Tracks In Texas Real?

Yes, the 113 million-year-old dinosaur tracks of Acrocanthosaurus that are found in a Texas park are said to be real.

How Old Are The Dinosaur Tracks In Glen Rose?

The dinosaur tracks that are found in Glen Rose are almost 113 million years old.

What Kind Of Dinosaurs Were In Glen Rose Texas?

The state park is one of Glen Rose's top tourist destinations. At the entrance, there are two huge fiberglass dinosaurs that look like Acrocanthosaurus and Paluxysaurus, but they are actually T. rex and Brontosaurus. The Brontosaurus has since been removed for research purposes.

Usually, these are covered in mud and water and that is why they are preserved as said by professionals.

The Dallas region of Texas was on the coast of a sea when the tracks in the park are considered to have been made.