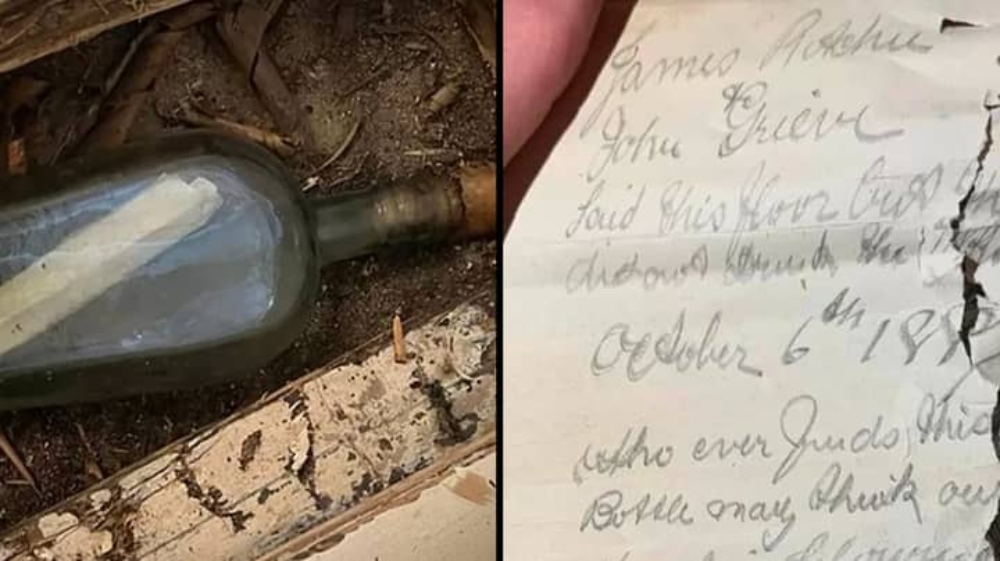 When 50-year-old Peter Allan opened the floor exactly where the whisky bottle had been left, he found the Victorian time capsule.

He hurried downstairs to inform the owner of the property about the 135-year-old message in a bottle.

Eilidh Stimpson had to break open the bottle in order to read the note. Mr. Allan told BBC Scotland that cutting through the floor precisely above the bottle was pure serendipity.

The room is 10ft by 15ft and I have cut exactly around the bottle without knowing it was there. I can't quite believe it. I was moving a radiator and cut a random hole to find pipework and there it was, I don't know what happened. I took it to the woman downstairs and said 'Look what I've found under your floor'.

It was located beneath what would have been a maid's room when the house was first built, according to Mr. Allan, proprietor of WF Wightman Plumbing. Eilidh Stimpson is a family doctor in Edinburgh, where she lives with her husband and two children.

She made the choice to postpone their effort to remove the note from the bottle until her eight-and ten-year-old children arrived home from school.

When they returned home, they frantically tried to remove the note using pliers and tweezers, but it began to tear a little. So, she broke the bottle with a hammer.

James Ritchie and John Grieve laid this floor, but they did not drink the whisky. October 6th, 1887.

Who ever finds this bottle may think our dust is blowing along the road.

I feel absolutely terrible breaking a 135-year-old bottle but it was the only way to reach the note. I've kept all the pieces in a Tupperware tub.

Who Found A 135-year-old Message In Edinburgh?

Peter Allan, a fifty-year-old plumber, was digging beneath the floor of Eilidh Stimpson when he discovered a Victorian time bottle and a 135-year-old message in it.

Who Was The Owner Of The Property Where The 135-year-old Message Found?

Eilidh Stimpson was the owner of the property where the 135-year-old message in a Victorian whisky bottle was found.

What Was The Date Written On The 135-year-old Message?

You don't anticipate a tradesperson you call to mend a broken pipe or inspect your boiler to unearth a long-forgotten artifact from more than a century ago, do you?

But one mother found out the hard way when a plumber she hired to assist her in moving a radiator unintentionally cut through her floorboards at the precise location where a 135-year-old message in a bottle from 1887 found in Edinburgh.