Meet Just 20 Of The World's Most Beautiful Types Of Pigeons

What animals have the capacity to make their way back home, even when released hundreds of miles away in unfamiliar territory? You might think of an eagle, a sparrow, or any of the flying animals. What's more, did you know that pigeons who are less familiar with their surroundings have this incredible ability? Yes, the pigeon is as loyal and affectionate as any other pet.

This article will take you on a tour of the world's most beautiful pigeons, and the author guarantees that you will fall in love with and be amazed by this particular aerial animal.

What Is Special About Pigeons

Because of their homing abilities as well as their speed, pigeons have played an extremely vital part in saving an endless number of lives throughout history. During World War II, pigeons were reputed to be faster than telegraph signals in terms of delivery time. French, Iraqi, and Chinese forces continue to rely on pigeons for reconnaissance.

What Is The Lifespan Of A Pigeon

They live on average for three to five years in the wild. As long as they're kept as pets, pigeons can live for up to 15 years. There are many things that affect the pigeon's lifespan, like natural predators and humans. Birds like the peregrine falcon and the sparrowhawk often eat pigeons, but sometimes they also eat other birds.

How Many Pigeons Are In The World 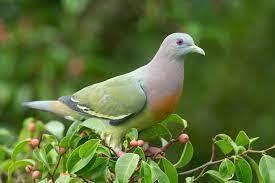 The pink-necked green pigeon has a grey head, a pinkish neck and upper breast, and an orange breast.

The International Union for Conservation of Nature (IUCN) has classified the pink-necked green pigeon (Treron vernans) as Least Concern. These subtropical birds can be found throughout Southeast Asia, particularly in Myanmar and Vietnam, as well as the Indonesian and Philippine islands. 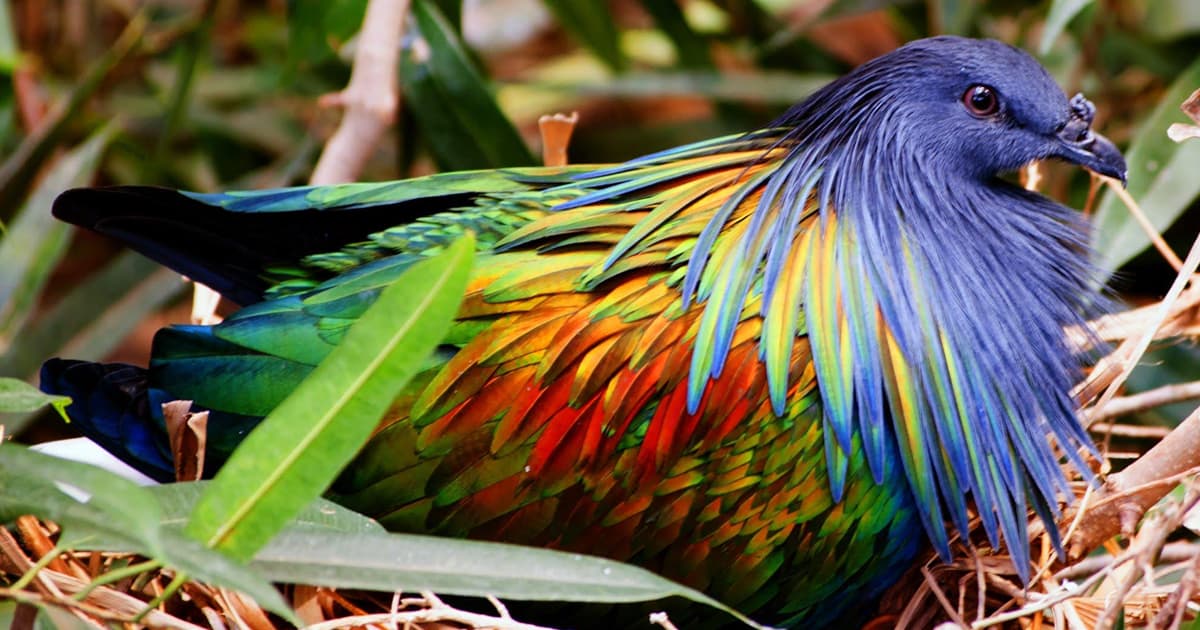 A colorful pigeon in the nest with its head and upper neck feathers is violet, with mixed green and yellow hackles.

The Nicobar pigeon is found on small islands and coastal regions from India's Andaman and the Nicobar Islands to the Solomons and Palau. The International Union for Conservation of Nature (IUCN) lists the Nicobar pigeon as Near Threatened because of habitat loss, hunting, the pet trade, and non-native animals like cats and rats introduced to their nesting islands. 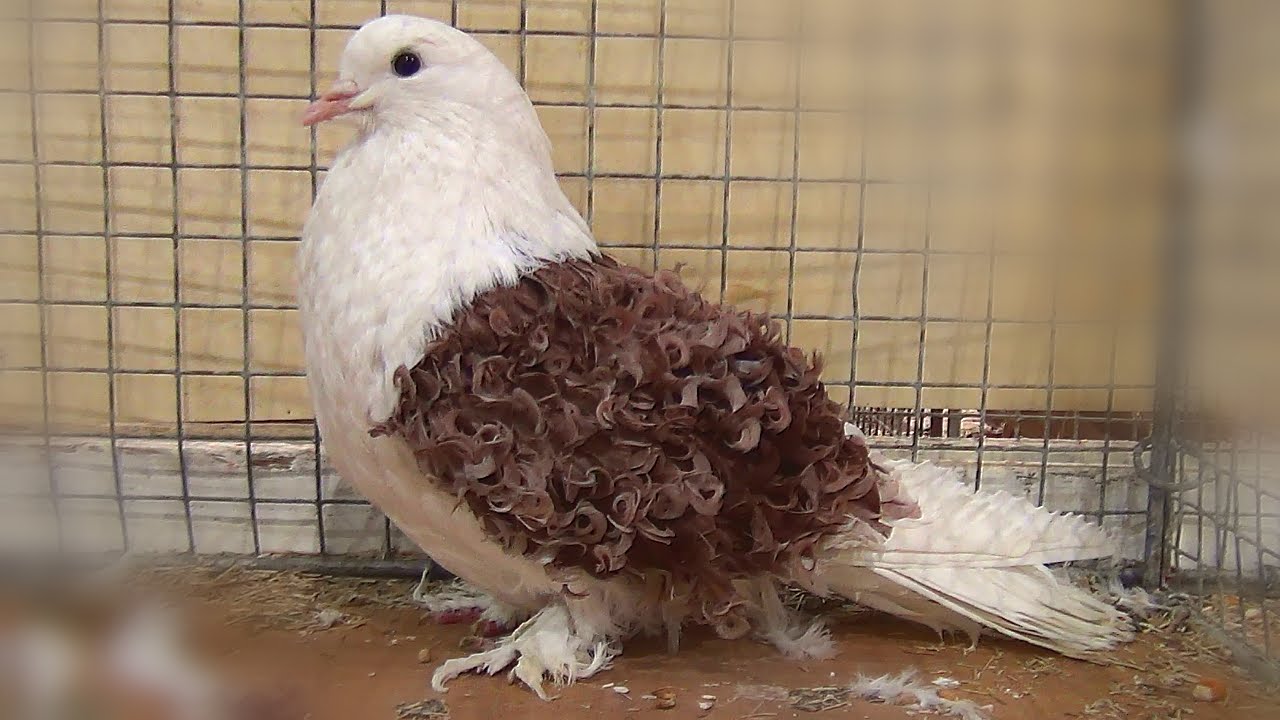 The Frillback is a long-established breed of fancy pigeon. All domesticated pigeons derive from the rock pigeon, including frillbacks. The wing shield feathers have a frill or curl to them. It is thought to have originated in Asia Minor. 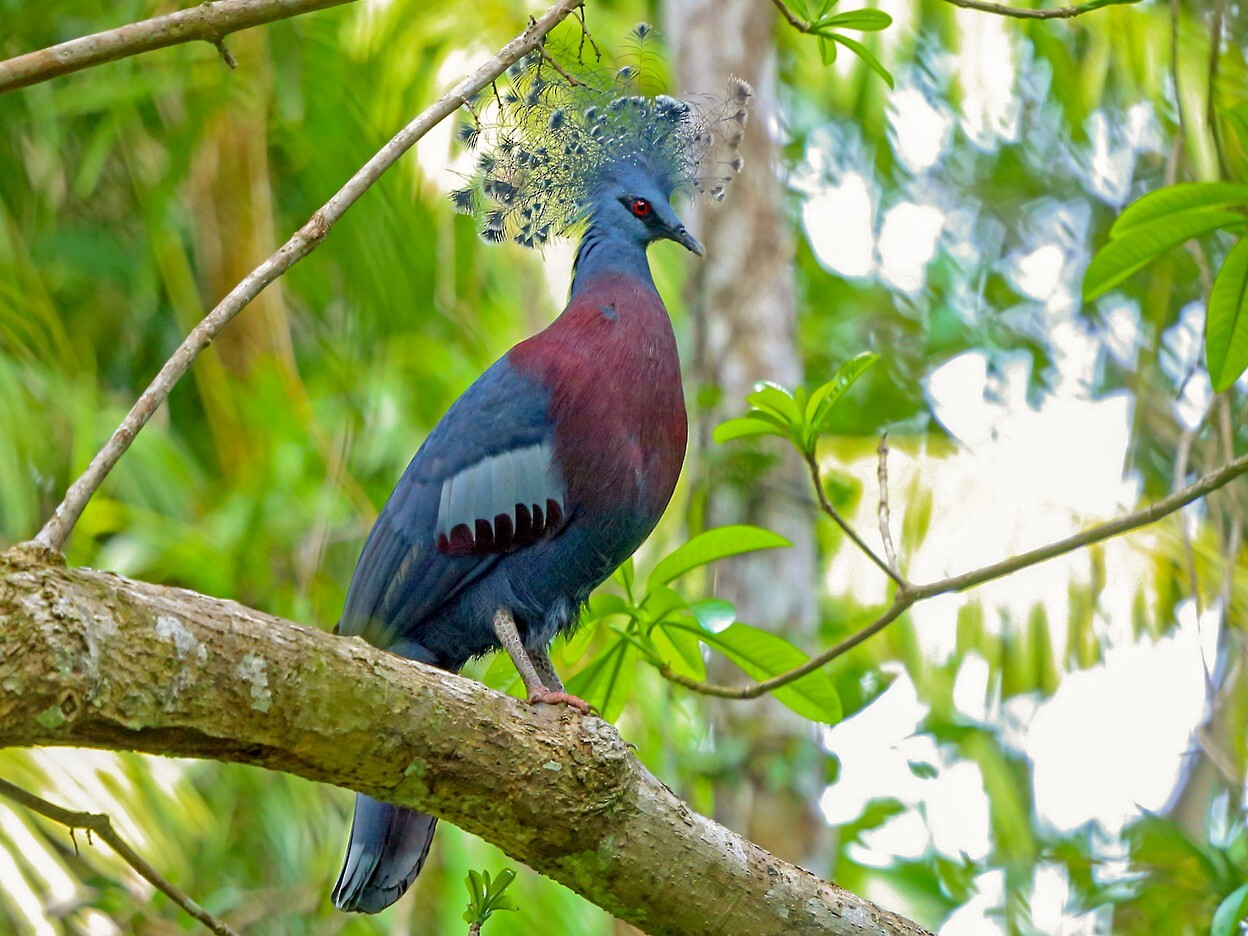 The Victoria crowned pigeon has a powder blue body, a maroon breast, and red eyes perching at the branch of a tree 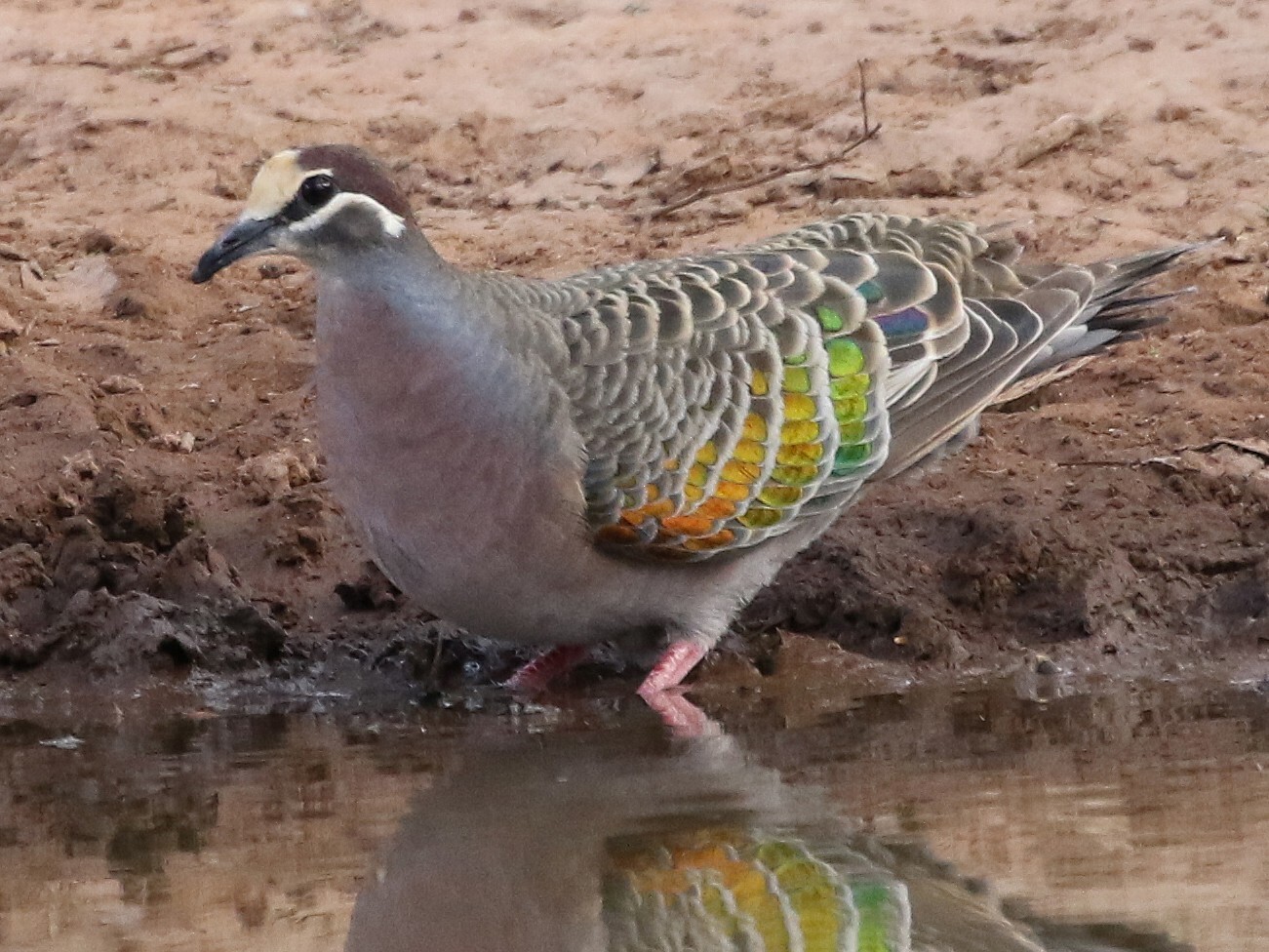 When the sun is shining, the bronzewing birds have iridescent wings that look bronze or green-brown when the light is dim. As the bird moves, the colors change as the bird moves.

Can You Eat Bronzewing Pigeon

When cooked in this style, wonga, bronzewing, and other wild pigeons become considerably softer, but they require a long time to simmer and must be cooked gently. 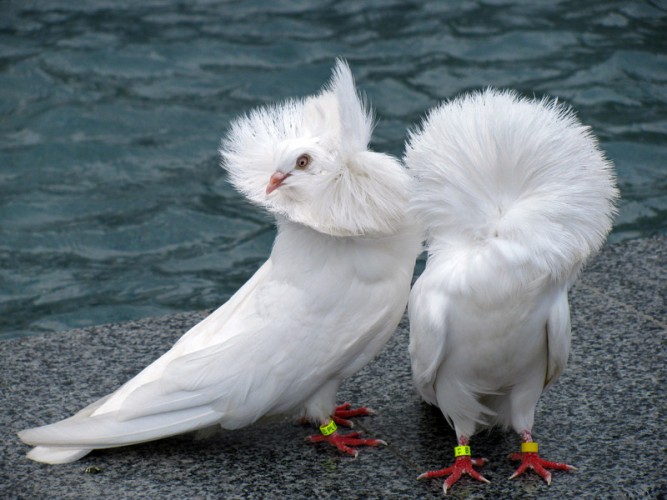 The Jacobin is a long-breeding fancy pigeon that originated in Asia. Jacobins, like other domesticated pigeons, are descended from the rock-pigeon. Group of Asian feather and voice pigeons. 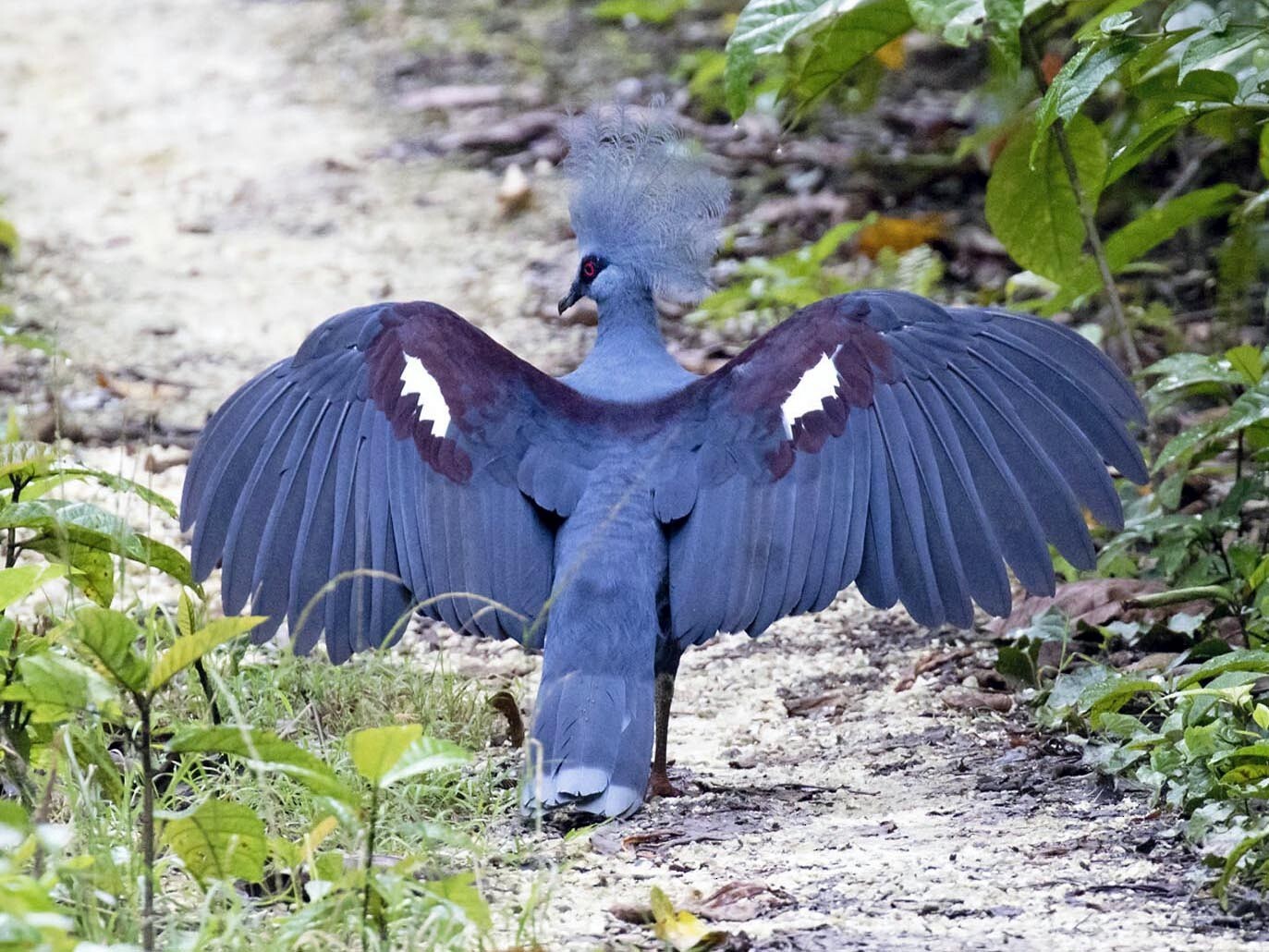 There are fewer Blue Crowned Pigeon in the wild because they are so beautiful that people keep them in cages the most. Males are usually bigger than females, but this isn't always the case. In general, it is 70 cm long and weighs 2.1 kg. 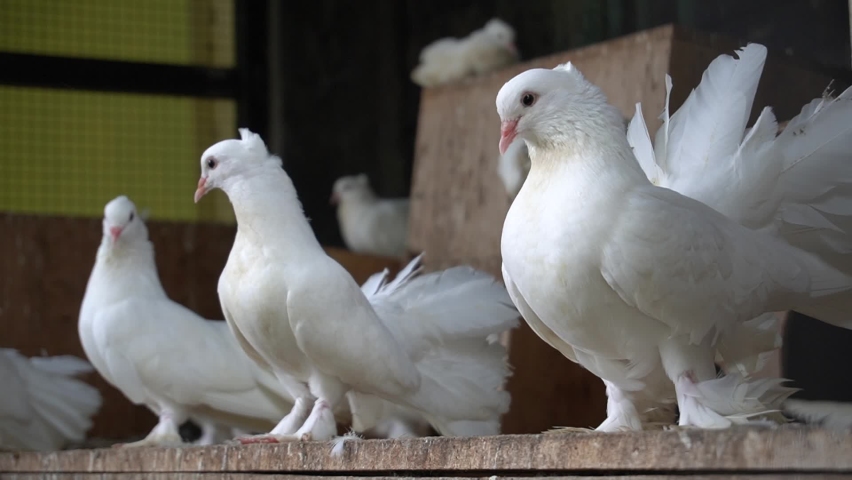 The Indian Fantail is a type of fancy pigeon that has been carefully bred over many years. This means that Indian Fantails, as well as other types of domesticated pigeons, all come from the rock dove. The Indian Fantail pigeon is a bird that lives a long time. Its average life span is about 10 to 20 years. 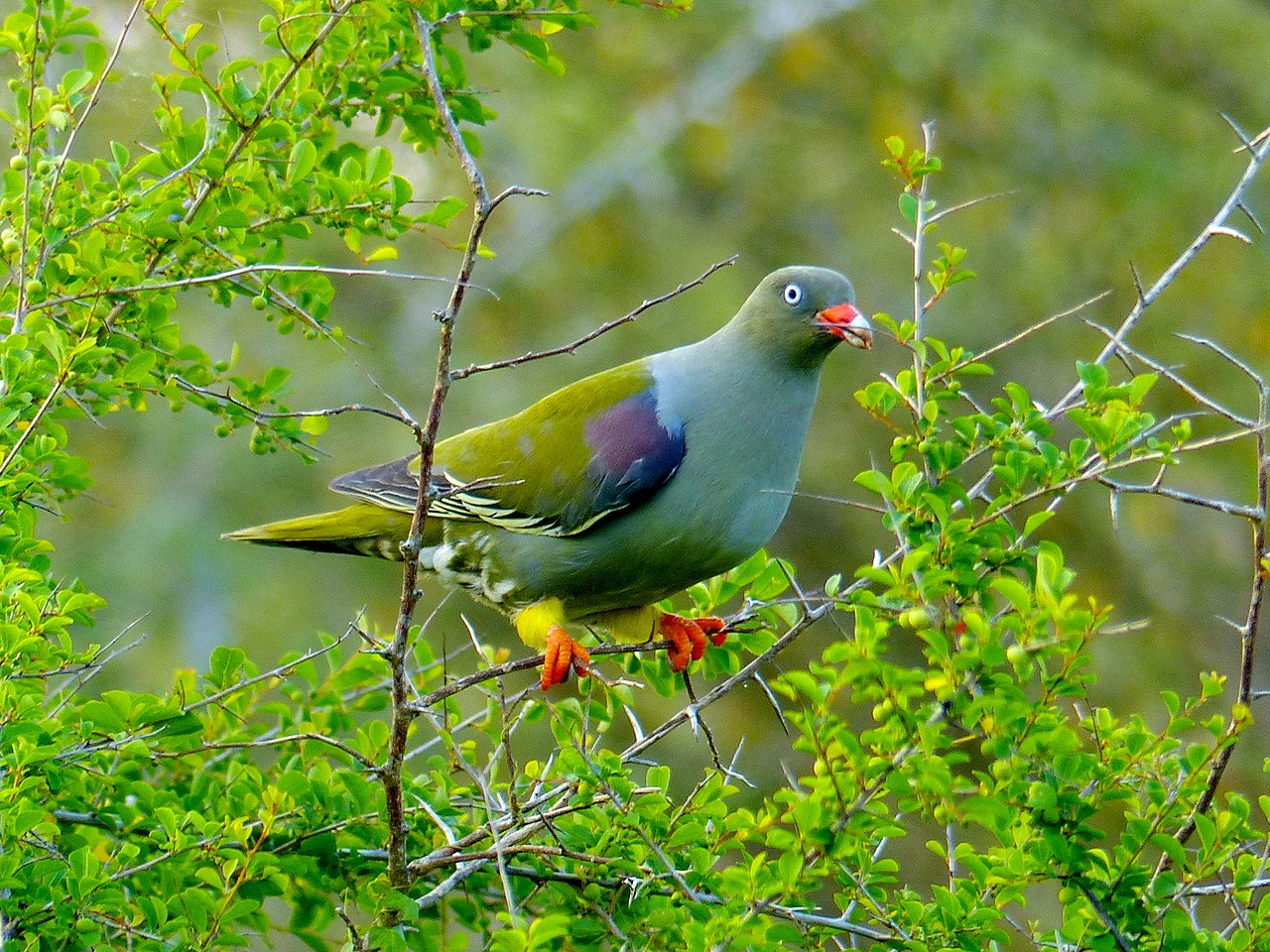 The African green pigeon is one of five green pigeon species found in the Afrotropics. The species has 17 recognized races in Sub-Saharan Africa. They eat mostly fruit, especially figs. In the wild, the typical life span of these subtropical birds is four to five years, depending on the species. 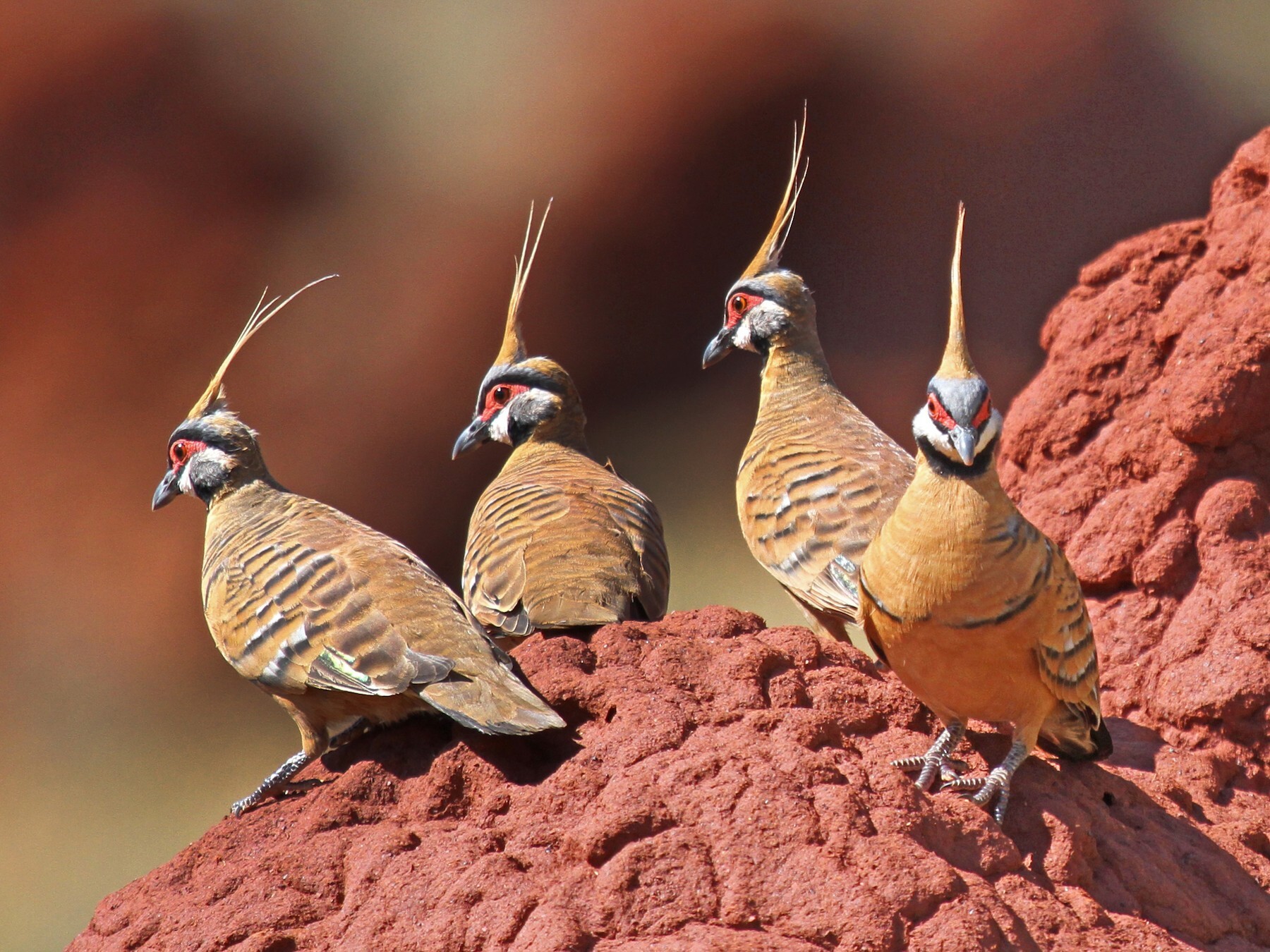 Four Spinifex Pigeon perching at the red colored stone with tiny black bars on their wings and back while its bill is black and its head has spikey feathers.

The spinifex pigeon is one of four endemic Australian birds. They find foods such as seeds, plants, and insects on the ground, mostly in bare areas between grass clumps, but also in dry rocky watercourses and dry wetlands borders. Their beauty and intelligence make them popular pets. The pied imperial pigeon is a huge pied pigeon. Plantations and scrub cover it throughout Southeast Asia from Myanmar and Thailand to the Philippines and the Bird's Head Peninsula in New Guinea. This is a fruit-feeding arboreal dove. It can eat huge seeds, which are then regurgitated or expelled entirely, depending on their size. 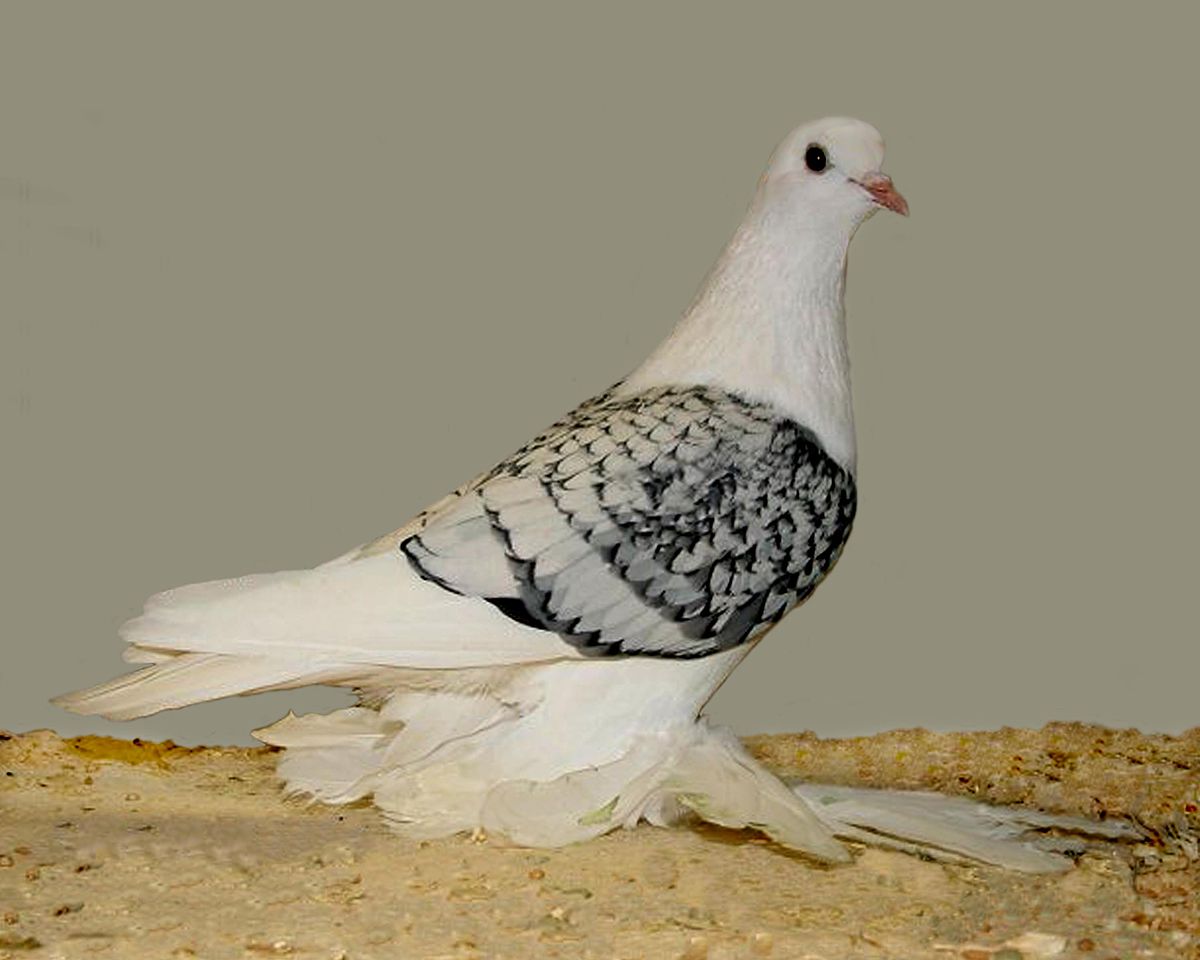 A dark-eyed white-colored ice pigeon has a unique black end lining feathers on its wings and heavily feathered feet and legs.

The Ice pigeon is a long-bred fancy pigeon. They are descended from the rock pigeon, as are other domesticated pigeon species. Early breeding took place in Saxony and Silesia, but it was developed throughout eastern Germany and western Poland. 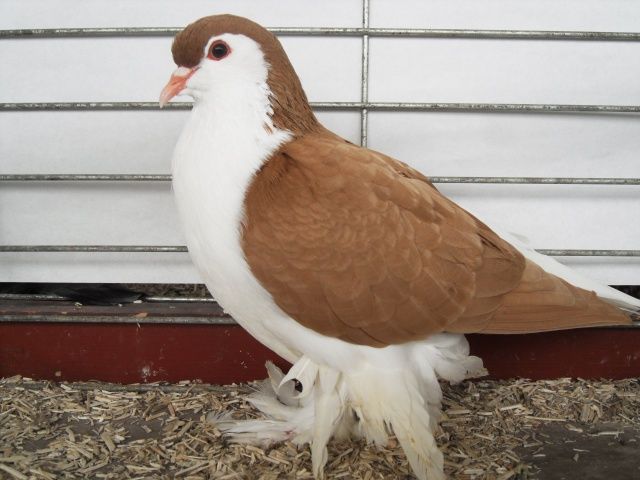 Lahore is a large and gentle breed of beautiful pigeon. Lahore breeders and other pigeon breeders are all related to the rock pigeon. This bird was from Lahore, Pakistan. It was also bred in what is now Iran. It was introduced to Germany around 1880 and became popular among pigeon keepers in the early 1960s. They are among the most colorful pigeons seen there. 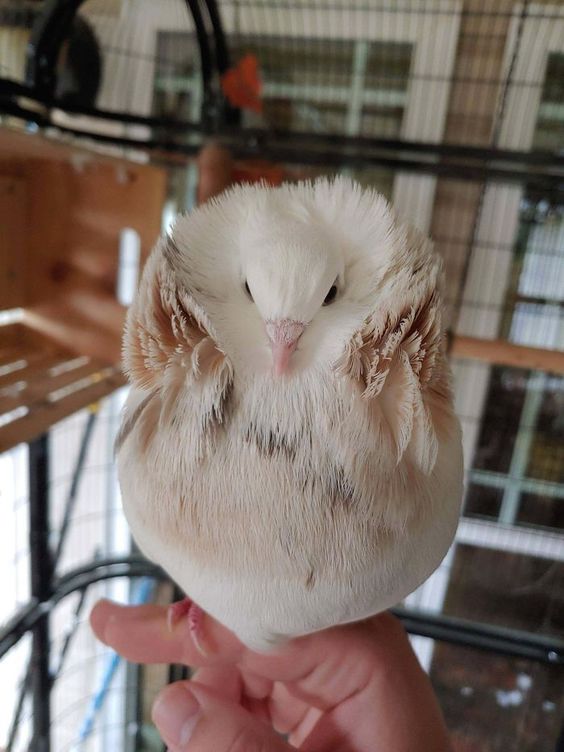 Fancy pigeons like the Capuchine have a hood and a crest on their heads. It's retained as a showpiece. It's a good pet. This pigeon is widely available. Almost anywhere in the world can keep this bird. Popular in the Netherlands, Germany, Malaysia, and Singapore.

Red White Roller Pigeon is one of the roller pigeons that can tumble or roll in the air. This is a type of pigeon that has been kept as a pet. It takes them about 30 minutes to fly around their home loft (coop) and do their acrobatic show, which is very tiring for them. Some people train them to fly from a portable coop that they put in a meadow or a park. 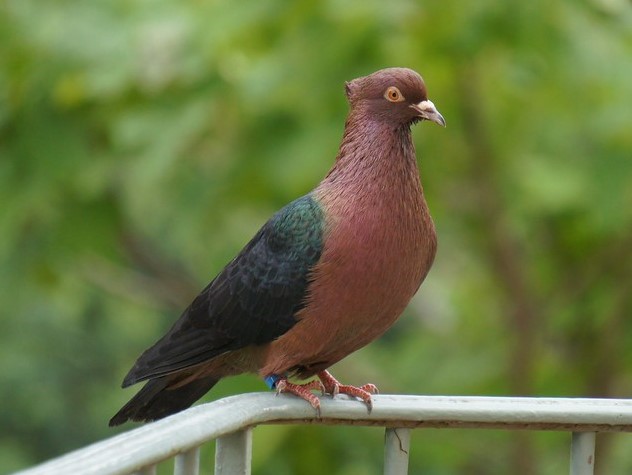 The Archangel is a kind of fancy pigeon that has feathers that look like they are made of metal. Other types of pigeons that are kept as pets are all related to the rock pigeon. It is kept as an ornamental or fancy breed because of its unique look. About 12 oz is how much an archangel weighs.

The Barb is a fancy pigeon breed that has been evolved over many years of careful breeding and development. Barbara pigeons, as well as other domesticated pigeon species, are all descended from the rock pigeon. Shakespeare made reference to this particular breed.

The Brunner Pouter is a fancy pigeon breed that has been produced over many years of careful breeding and development. They are all descended from the rock-pigeon, as are other species of domesticated pigeons, like the Brunner Pouter. The breed is one of the most widely bred blower breeds in the world. 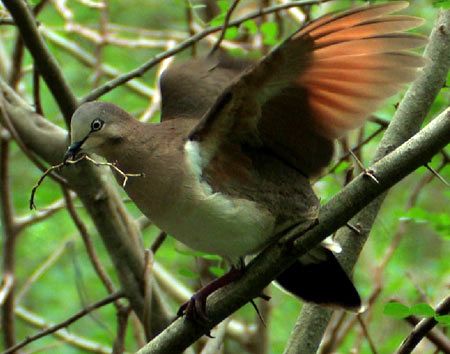 Perching in a thorny stem, Grenada dove with open wings has a twig on its beak

The Grenada dove is a medium-sized dove that lives in the New World. In the Caribbean, it is unique to the island of Grenada. One of Grenada's most famous birds was once called a pea dove or a Well's dove. It is thought to be one of the most endangered doves in the world. In fact, according to the International Union for Conservation of Nature (IUCN), grenada dove is now in the category under Critically Endangered.

The author came up with 20 of the world's most gorgeous pigeons. Humans are endangering most of these beautiful pigeons. They are also on the endangered species list due to habitat loss and forced migration. Diverse actions can be taken to save birds. It's vital to preserve bird populations and their habitats. Many people could assist us to save endangered species.