A 95-year-old woman in Italy has become the oldest person to be cured of Coronavirus, as she has been allowed to return home.

The Coronavirus pandemic is a very odd thing. There’s not many people alive who have lived through something like this, and the thought that we may soon be made to stay indoors by law isn’t one any of us feel particularly comfortable with.

This is bigger than us though, and our comfort isn’t necessarily the most imperative factor at the present. It’s not all doom and gloom though, as one 95-year-old woman was cured of the virus in Italy, against all of the odds.

Back on the 5th of March, Alma Clara Corsini, from Modena, was admitted to a hospital in Pavullo, as she contracted the dreaded virus that has left the world at a standstill.

Despite this, and without the help of antiviral therapy, Corsini’s body showed a “great reaction”, and less than twenty days later she was cured. 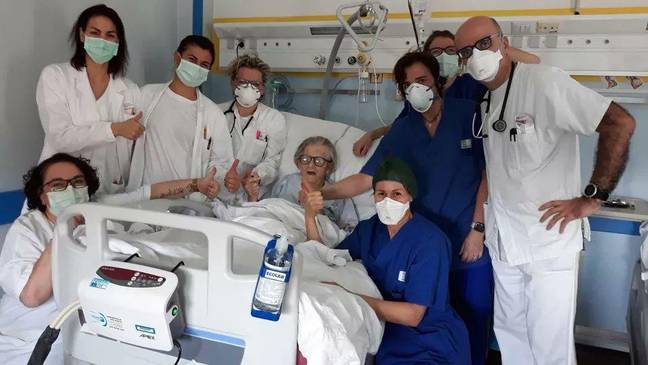 “Yes, yes, I’m fine. They were good people who looked after me well, and now they’ll send me home in a little while.”

She has since been discharged from the hospital as she became the “pride of the staff” working there.

While the toll taken by Coronavirus is largest in Italy, one small town managed the reduce new cases of the virus to zero, as the country went into full lockdown.

After the first death in Italy from COVID-19 was was recorded in Vo’ Euganeo, in the province of Padua, Veneto, the town shut itself off from the rest of the country.

The governor of the region then made sure that every inhabitant was tested twice – once before the lockdown and once two weeks later – and following that, the 3% of people who tested positive were put into quarantine.

Over in the UK, things look like they’re still building up to a peak, with many suggesting that we’re only two weeks behind the chaos and death taking place in Italy.

The prime minister is urging people to heed the advice of social distancing and not leaving the house for unnecessary reasons, but with many electing to ignore this, it seems likely that stricter rules will be enforced.

Let’s hope it doesn’t come to that.