A dad went viral after he ordered what he thought was a small-ish dinosaur statue for his son, before learning that it was actually the biggest thing in the world.

Look we’ve all done it; we’ve all ordered something and when it turned up, learned that it was way off what we were expecting – Usually when you get something from Wish or Zaful – but never to this degree.

A 20 foot dinosaur statue? That’s a pretty big cock-up, isn’t it? I mean it’s an even bigger statue but clearly this man just didn’t read the small print… or any of the print at all.

Little Theo Bisson is a big fan of the prehistoric, and his father Andre wanted to gift him with a dinosaur as big as his love for his son. Theo asked for the “largest carnosaur he’d ever seen,” and Andre was more than willing to oblige, and began to search the internet from his home in Guernsey to find one. That’s when his wife noticed that an amusement park on the neighbouring isle of Jersey had recently shut down and was selling off their dinosaur statues from displays. You can’t write that kind of coincidence. 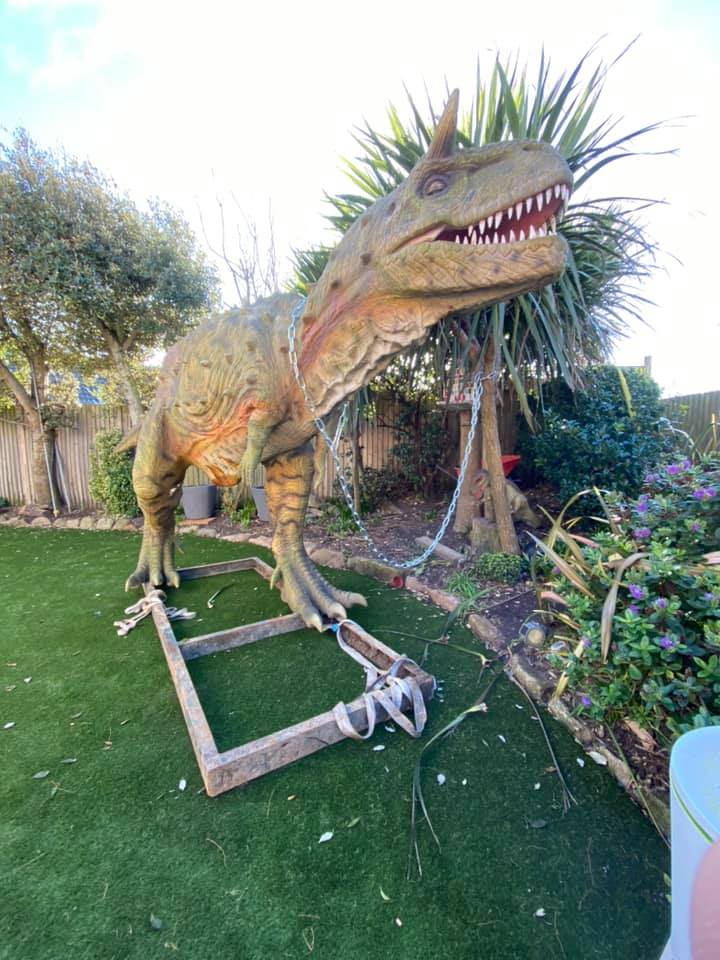 As if by total chance, they had a carnosaur in stock and though it would set Andre back a cool one grand, he thought Theo was worth it. £1,000?! I’ve met four-year-olds and their interests change with the wind. Sure, Theo likes dinosaurs now, but in a month he’ll like F1 cars and a month after that he’ll only wear clothes with a camouflage pattern. ONE THOUSAND POUNDS?!

Anyway, Andre couldn’t find out the size of the dinosaur somehow, and went ahead with the purchase. One day the delivery firm got a hold of him and broke the news that the dinosaur didn’t fit in their truck, but this still didn’t persuade Andre to cancel the order.

Eventually the carnosaur showed up on the back of a lorry and had to be lifted – by a crane, no less – into their garden. All 20 feet of the thing.

Speaking about the arduous 40-minute process of getting the dino into his garden, Andre said:

“Thankfully he was well strapped in, although when he was being lowered in a gust of wind started him spinning in the air. His tail missed my dormer window by less than an inch“.

Despite the ridiculous nature of the massive dinosaur, Andre plans to keep it and insists that Theo is totally mad for him, naming him Chaz.

“Theo didn’t want to go to school as he didn’t want to leave him, he thought he’d be home alone—he wanted to take him on the yellow crane. Theo and Chaz are best buds—he’s got a pet dinosaur“.

Chaz is a great name, to be fair.