A Hammerhead Shark Was Seen Chasing Stingrays Near Alabama Beach 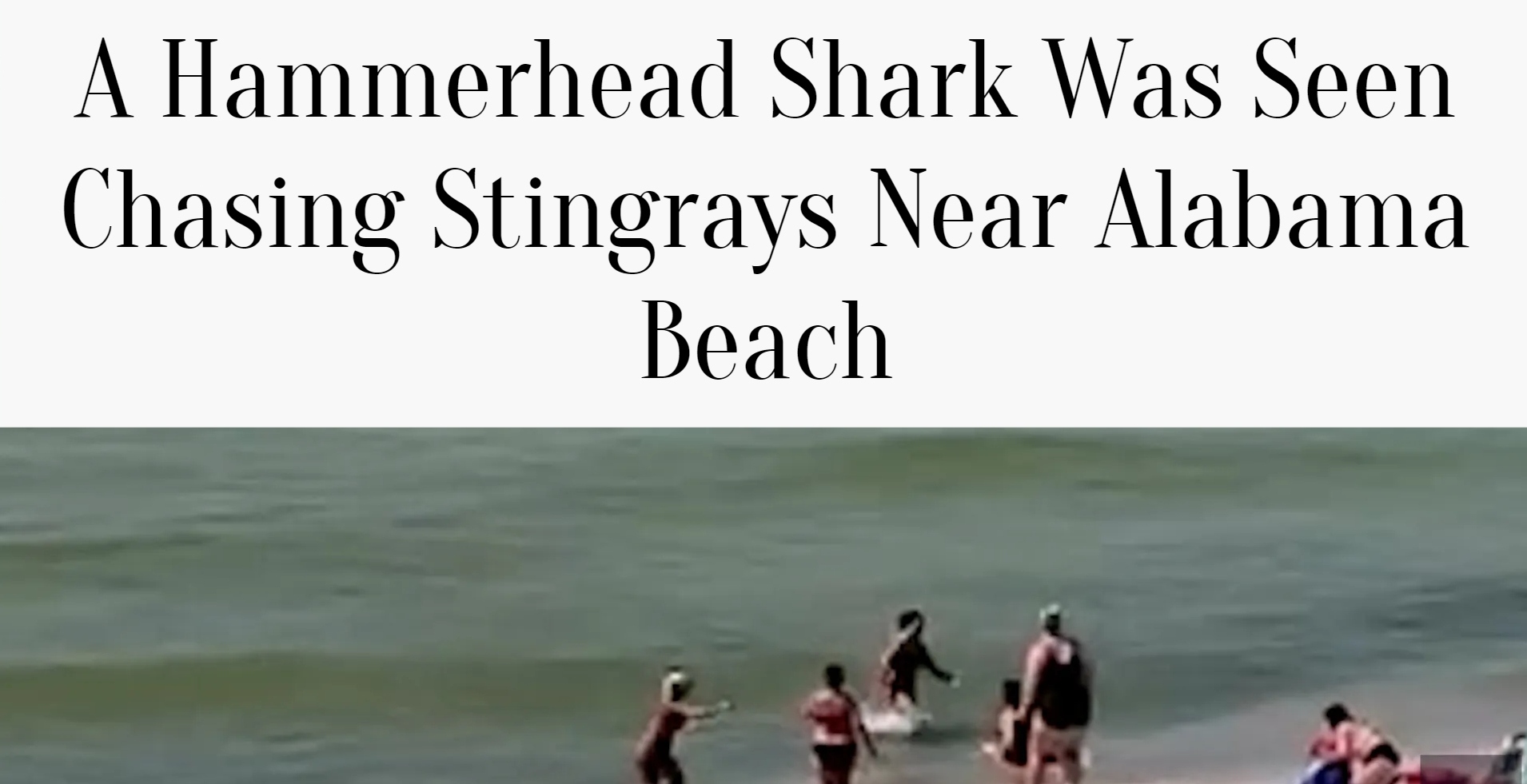 This week, a Texas woman's (Catarena Peek) video of a shark thrashing in the surf off Orange Beach has gained attention from media outlets.

The opening scene of Catarena Peek's 85-second Facebook video shows a shark swimming around in waters 20 to 30 yards away from a group of beachgoers.

As the action moves closer to the shoreline, these quickly leave the water.

Someone can be heard estimating that the shark is a hammerhead about 10 feet long in the video, which was apparently taken from a nearby balcony.

Even though it's difficult to gauge the shark's size and species, it's clear after a few seconds that it's pursuing something other than humans.

Observers claim that it is pursuing a stingray.

Indeed, as the shark moved to deeper water toward the end of the video, a ray was seen shooting toward the shallows.

It's unclear if this ray was the intended victim or if the shark actually caught the one it was pursuing.

Someone else cries out, "Aww, poor little stingray."

A Hammerhead shark was seen chasing Stingrays near Alabama beach at a high speed in the Gulf of Mexico, according to a video posted on Facebook by Catarena Peek.

The shark can be seen thrashing close to the shore as it pursues stingrays in a video taken by Texas resident Catarena Peek.

Peek told Storyful that although she had seen 15 sharks on Monday morning, the hammerhead was the biggest one.

A few stragglers are seen scrambling out of the shark-infested water as the action moves closer to the shoreline as a group of beachgoers watches at the water's edge.

“There was some man down there screaming that there was a shark and I guess they finally saw the dorsal fin and they realized how close he started getting so they started jumping out of the water as fast as they could.”

During the chase, the hammerhead shark demonstrated its speed and agility, providing beachgoers with a breathtaking up-close view of nature in action.

As you can see from Peek's video on Facebook, Peek and Deshotel's view from the 10th floor was also pretty unique.

Every year, Catarena Peek and her boyfriend Alec Deshotel visit Orange Beach, but this will be a special trip for the Texans, according to Catarena.

Deshotel told FOX 10 that "This is the first time we have ever seen anything like this for sure."

"I look out the window…and there it is.

We don’t know how big it was, but it was massive."

The couple was staying at the Regency Isle condos with Deshotel's family on a balcony on the 10th floor.

Peek claimed that she began using her iPhone to record the video at around 10 a.m.

In the shallow area of the Gulf, the enormous shark chased stingrays to demonstrate its speed.

The few individuals in the water can be seen scurrying to exit in the video.

Peek claimed that she began recording because it was the second shark they had seen at only 10 am from their tenth-floor balcony. 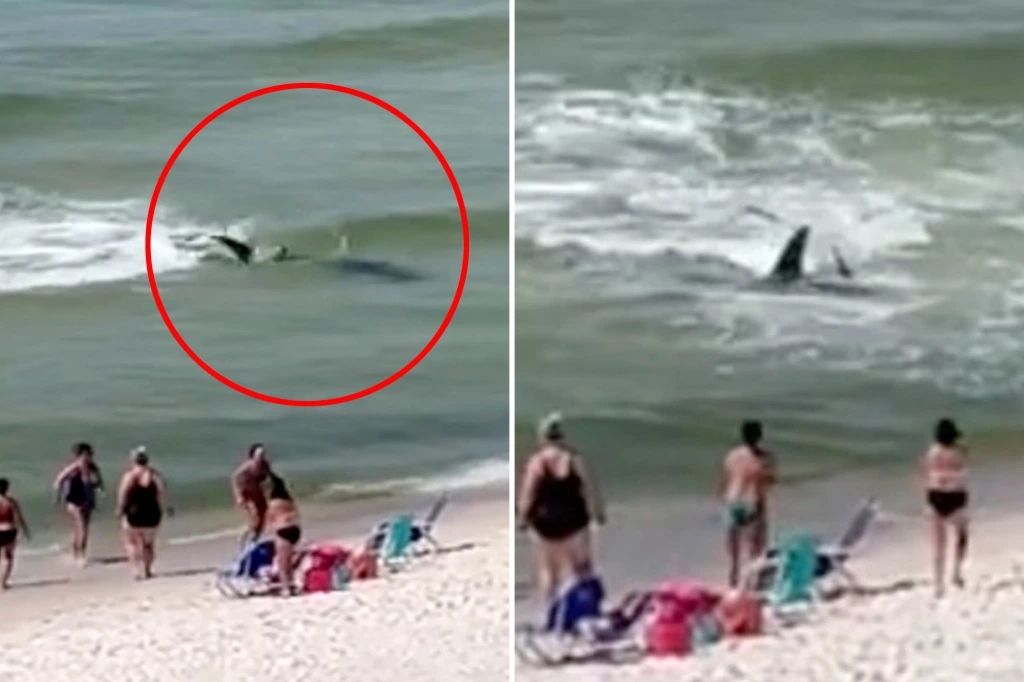 "I just ended up recording it because I thought it was really cool, and I just posted it to Facebook thinking a few hundred of my friends would find it kind of cool, and then all of a sudden, I looked down at my phone and it was over 100,000 views, and I was like, Oh, that's pretty cool."

The sighting, according to Peek and Deshotel, did not deter them from entering the water.

Peek, a certified diver, claimed to have spent her entire life swimming with sharks.

Deshotel claimed that while deep sea fishing, he encounters sharks.

Still, for both of them, this was a first.

“Once in a lifetime kind of experience for sure.

It was just really cool to watch,” The two said.

"We saw about 15 sharks in total that morning, the hammerhead was the largest we had seen.

They were chasing stingrays, but they were not messing with any of the people in the water."

She continued, “It is not uncommon to see sharks up close, but the locals said it is very rare to see a shark that size so close to shore.”

Helicopters circled the area every hour for the following two days in an effort to spot more.

Alabama's most southwesterly point is on the Gulf of Mexico, a shark-filled area.

Several sizable shark species can be found in Alabama, but encounters with people are uncommon.

Many of the sharks swimming in the coastal waters of Alabama are currently classified as endangered and may go extinct.

Both attacks on people and large sharks being caught by fishermen are uncommon on Alabama beaches.

Because of this, people pay attention when a large shark is caught off the coast of Alabama.

Here, you'll discover exactly what kinds of sharks beachgoers might encounter as well as the significance of sharks to both the marine ecosystem and the health of the planet.

Sharks have existed in the waters off Alabama for a very, very long time.

Therefore, it is not surprising that some of the largest sharks occasionally travel to coastal Alabama. 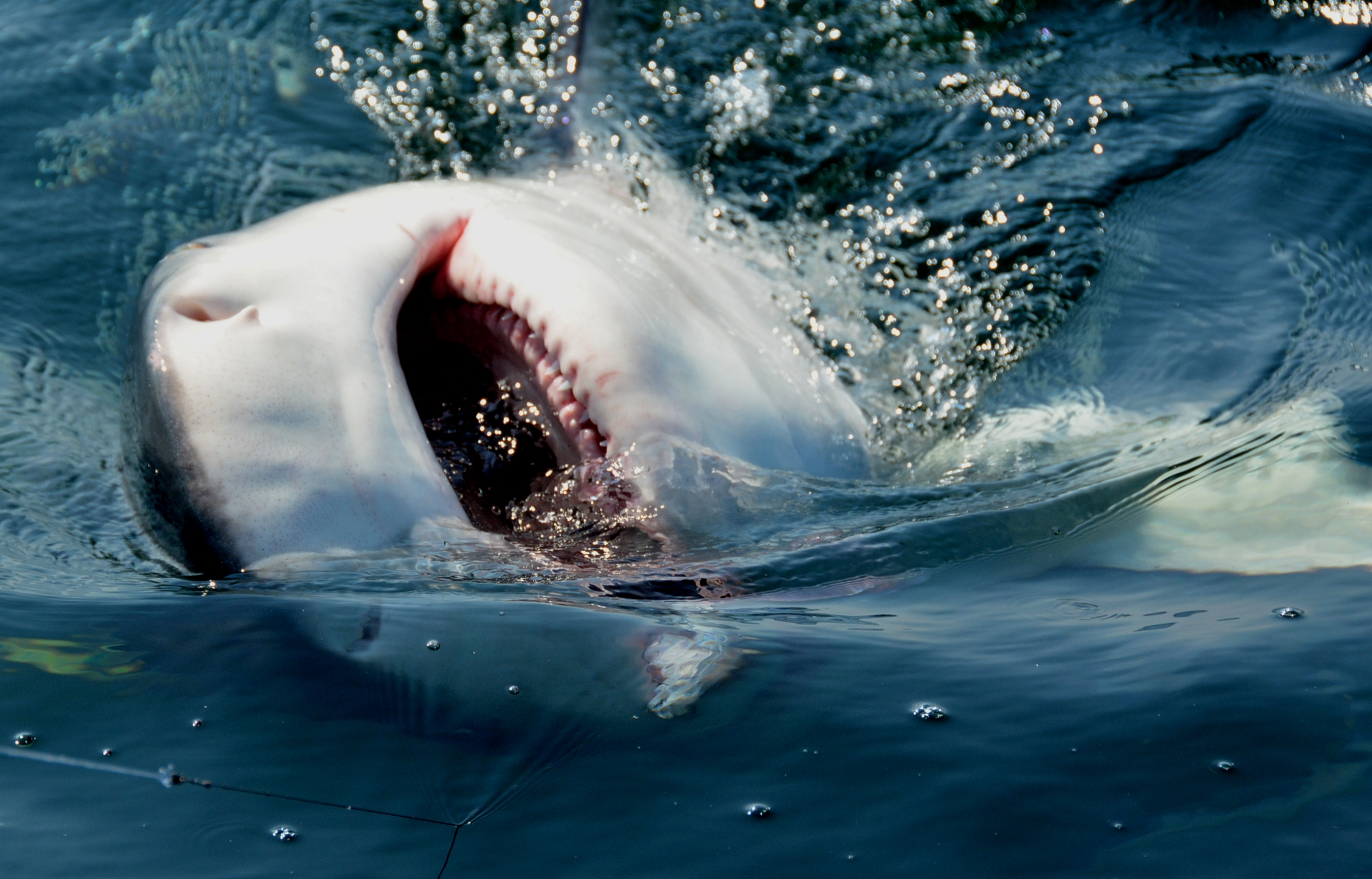 A shark attacking something in the sea

The scalloped hammerhead shark, one of the biggest sharks in Alabama waters, is now rare.

Due to overfishing, their population has drastically decreased.

These sharks, which can reach lengths of 14 feet, usually inhabit shallow coastal waters.

Their curved, scallop-shaped hammer's front gave them their name.

A fisherman from Birmingham killed it in 2015 close to Gulf Shore.

The shark seized the bait over a coral reef while the fisherman was pursuing red snapper.

More than 8 feet long and weighing 595 pounds, the largest tiger shark ever caught off Alabama.

In the Gulf of Mexico, during the yearly Alabama Deep Sea Fishing Rodeo, a tiger shark was killed in 2022.

Fishermen also brought in two additional tiger sharks, weighing 466 and 438 pounds each, in addition to the nearly 600-pound specimen. 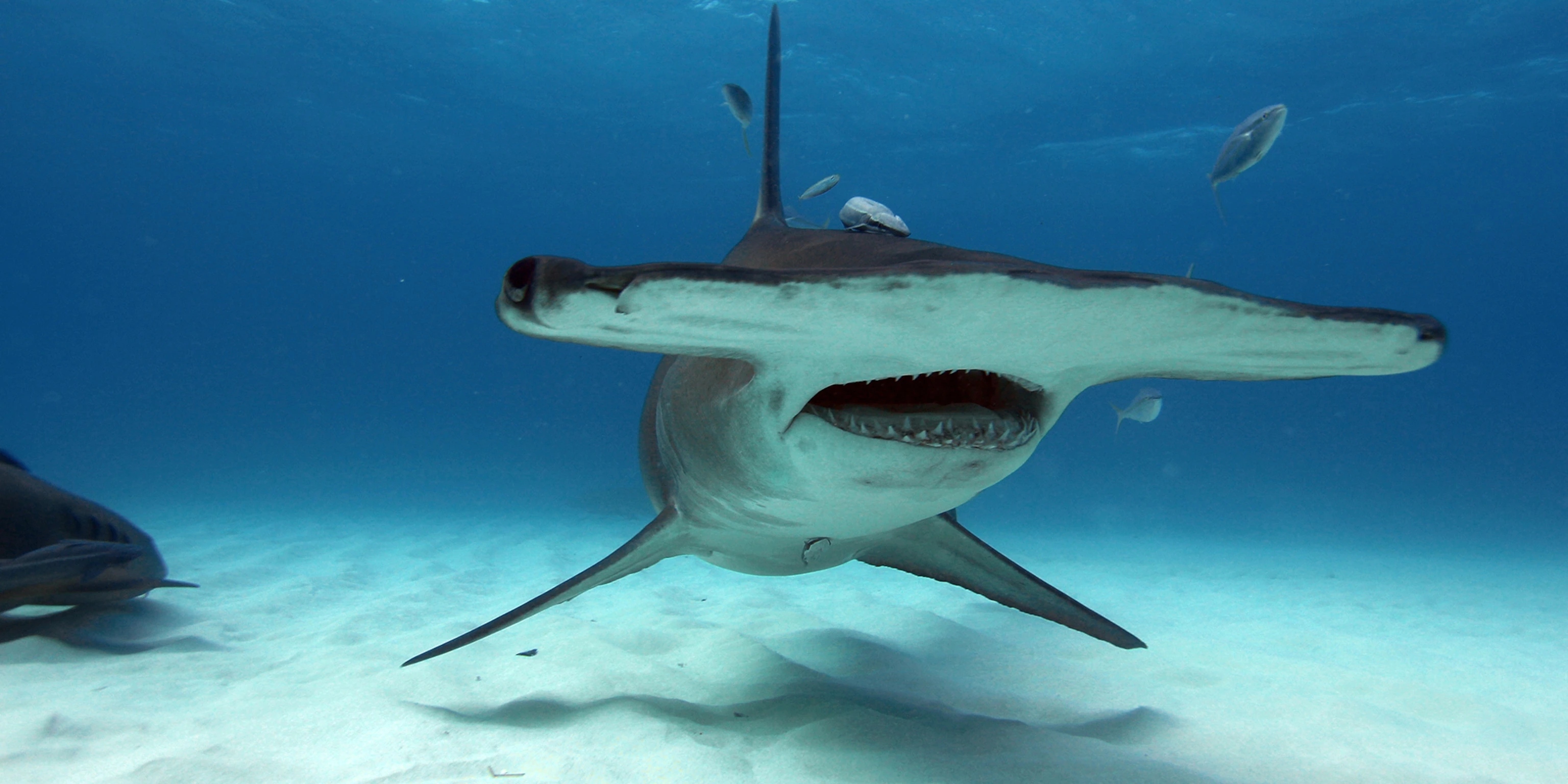 A Hammerhead shark in the sea

Has Anyone Been Killed By A Hammerhead?

Since AD 1580, hammerhead sharks of the genus Sphyrna have attacked humans 17 times have been documented by the International Shark Attack File. No recorded human deaths have occurred.

Can A Hammerhead Shark Hurt You?

The great hammerhead should be avoided because of its potential to seriously harm humans due to its size and sharp teeth. This species has a reputation for being the most aggressive and dangerous of the hammerhead sharks, which may be undeserved.

Where Are Hammerhead Sharks Found Most?

Hammerheads are found worldwide in both tepid and tropical waters. They can be found along the continental shelf and close to the shore (shallow waters). In the summer, they have been observed migrating in large groups to cooler waters.

By Wednesday afternoon (17 August 2022), the Facebook video by Catarena Peek in which a Hammerhead shark was seen chasing Stingrays near Alabama beach had received over 75K shares.