A Local Artist Who Taxidermies Rats And Mice - Ankixa Risk 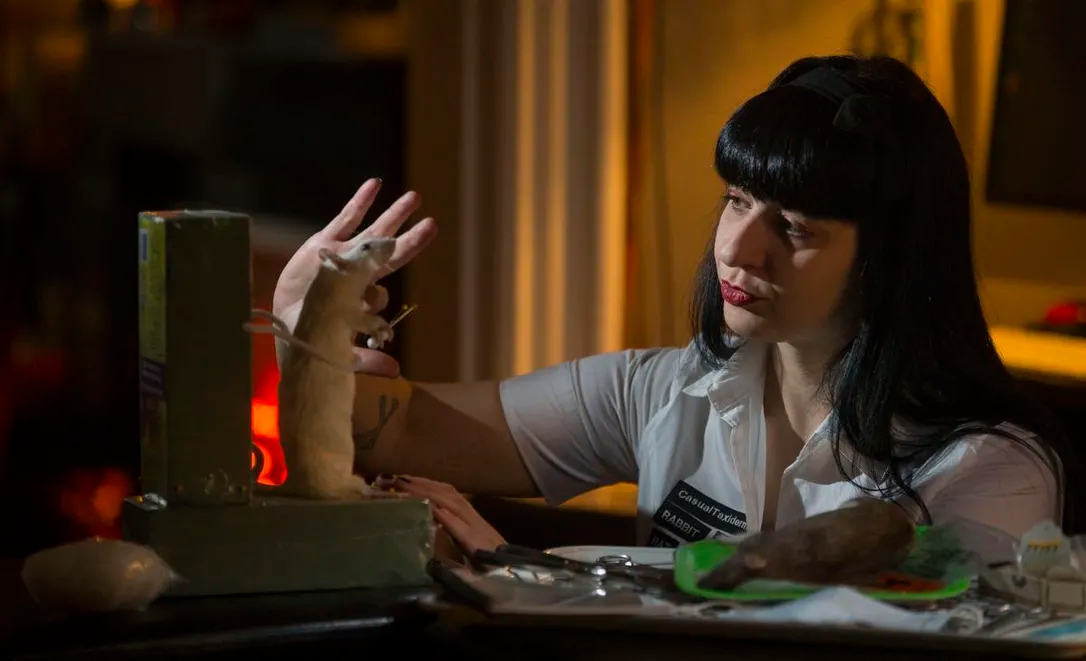 Ankixa Risk is a friendly and passionate company owner from Hamilton who also happens to like to skin rats. She is a local artist who taxidermies rats and mice.

For the love of art, you know. She moved to Hamilton from Toronto around ten years ago and now works as a taxidermist. 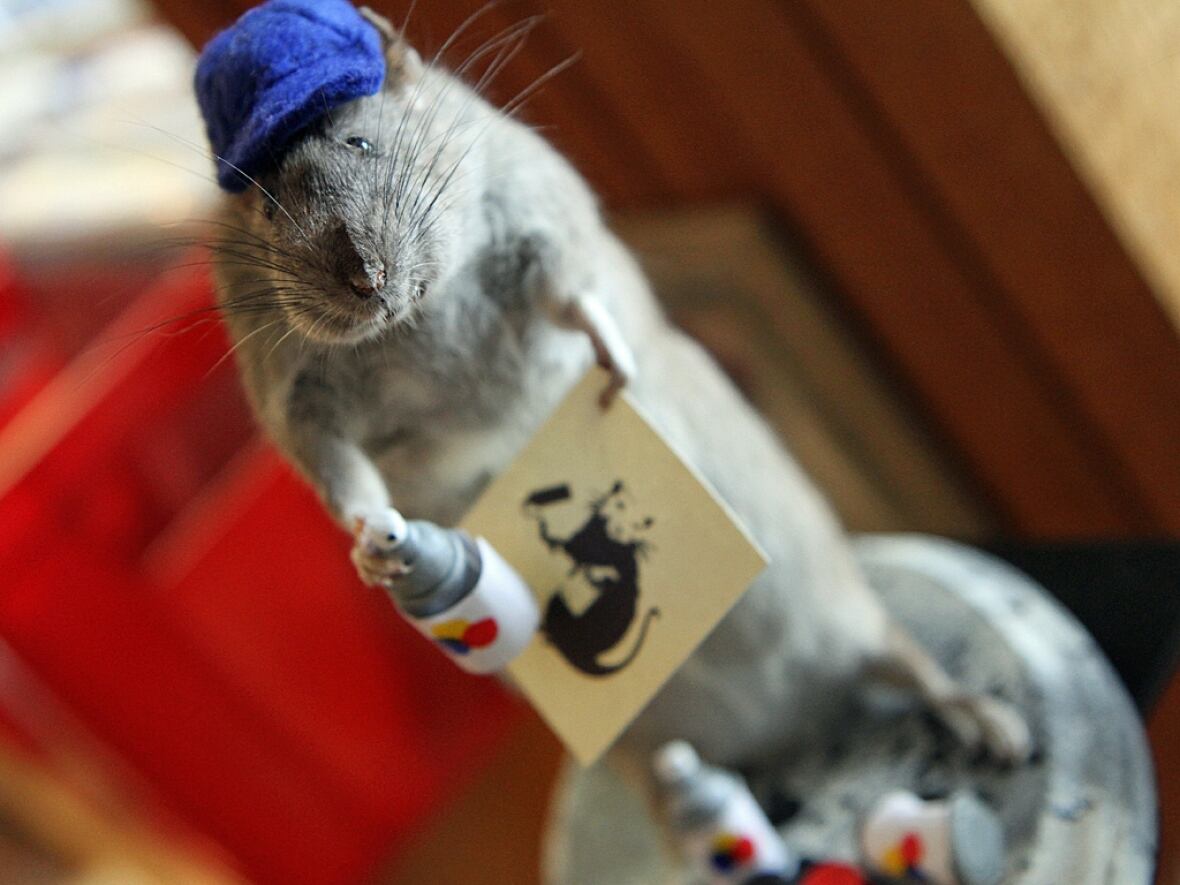 If you don't know what taxidermy is, here is the answer.

A method of preparing, stuffing, and/or mounting an animal for display or study is called taxidermy.

In order to make an animal appear alive, the real skin of the animal is typically arranged over a false body.

It is a method of keeping the body intact so that researchers or visitors to a museum can examine what the animal looked like when it was alive.

The majority of the animals at the museum are kept behind closed doors in the collections; not every animal there is stuffed to appear alive.

Some are used as study skins, while others are stored in ethanol as skeletons.

A study skin is a streamlined kind of taxidermy in which the animal is skinned, filled, and given time to air dry.

Study skins are meant to assist researchers and are not intended to seem alive.

Now, let's go back to Ankixa Risk, a local artist who taxidermies rats and mice.

Ankixa Risk frequently receives the same reaction when she discloses her preference for skinning animals, stuffing their corpses with wire and cotton, and leaving them in amusing configurations.

This is what most people say to Ankixa, "Well, I’ve never heard that before."

Risk chuckles as she says,

I have to just tell them I’m (feeding) my own desire to stuff dead things.

Risk spoke to CBC Hamilton from her display at Compilation on Wilson Street, close to James Street North,

I’m making cute forever friends, I love the presentation of the afterlife.

One of those "forever pals" is a rat riding a bike, among several variations in that presentation.

The other has a rat graffiti artist clutching a spray bottle. The mythological Jackalope, a jackrabbit with antelope horns, is mounted just next to it.

With the exception of jackalopes, she claims that most of her work is done on rats in an effort to maintain ethics and sustainability. 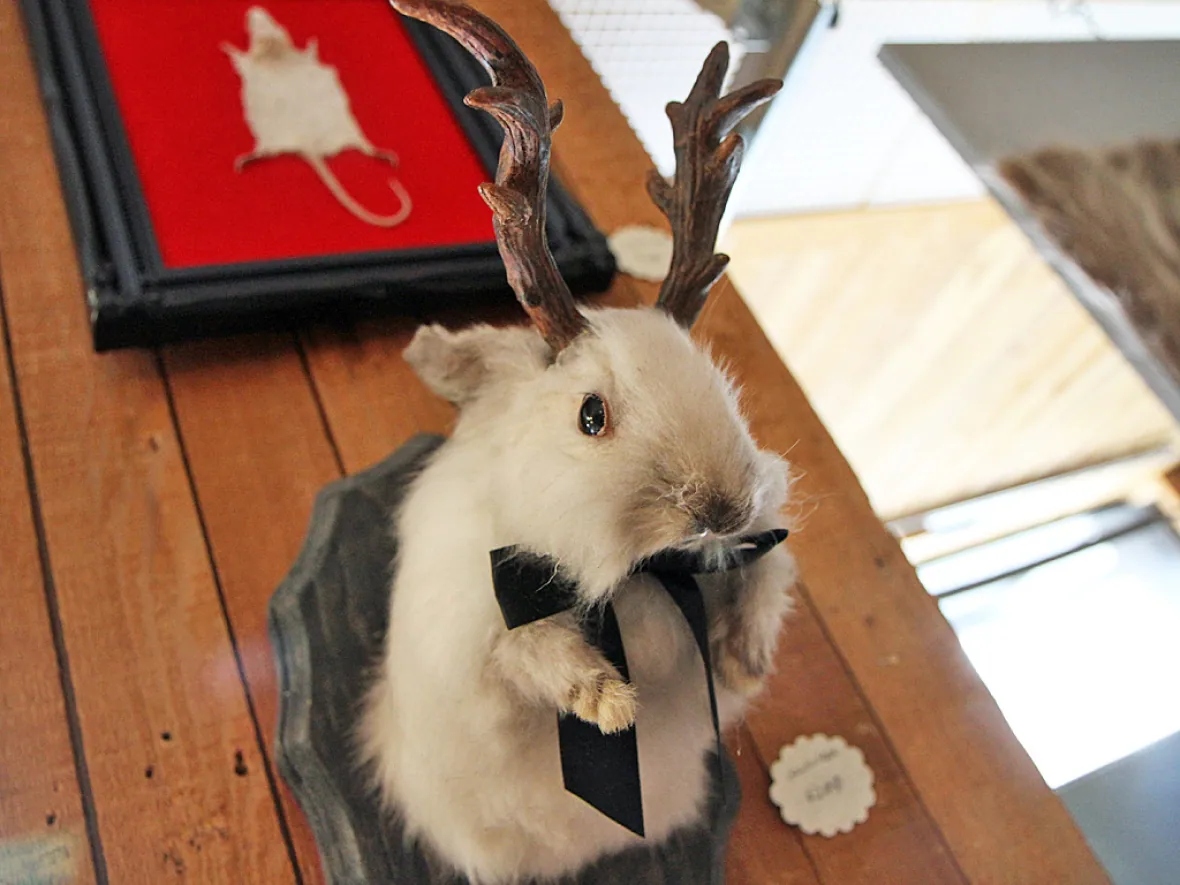 A white mouse and deer antlers taxidermised into a new creature

The animals are purchased from reptile supply stores after she or a student skins them, and the meat is shipped to reptile zoos to be fed as meals.

However, occasionally she receives a carcass in another way. Sometimes the object of preservation is a person's beloved pet.

She doesn't do that for dogs or cats since she thinks it can be traumatic for humans in the long run; just rats and some other small creatures like hedgehogs.

Risk has no problem taking an animal out of the woods or from the side of the road to utilize it for her artwork.

However, all of the rats in her classes are ethically acquired and frozen.

The artist, who is 41, conducts weekend classes in "home taxidermy."

She is also teaching "casual taxidermy" in one-day classes so that anyone can learn how to dress up a rat and transform it into artwork.

For $200, she will walk you through the intricate process of stuffing, posing, and skinning rats using "student kits" that include a scalpel, cotton balls, stitches, and beads for the eyes.

Students study Victorian-era taxidermy methods, such as how to skin a rat and stuff it with cotton, fiber, and pipe cleaners, over the course of an eight-hour lesson.

The rat must next be outfitted with the appropriate accessories in order to be considered a genuine work of art.

Strangely, the majority of doll accessories usually fit them. She chuckled, "They’re almost Barbie-sized – just with a more realistic waist."

Though her classes are small, they frequently fill up. Nevertheless, certain individuals always find this to be inherently unsettling.

According to her, her mother was unable to look at a piece for a very long time.

Interview With The Star

In an interview with The Star, she answered some of the important questions that are provided below.

Question: You do this with rats. Where do you get the rats?

We use medical scalpels and everyone has rubber gloves with surgeon’s aprons on. The process is very clean — no fear of disease and stuff.

Question: Are they dead when you get them?

Answer: Yes, they’re dead. Most reptile supply shops or even just pet stores that cater to reptile owners, they sell everything from tiny baby mice up to large jumbo rats.

Question: OK. And can you tell me about these courses you’ve organized?

Answer: The techniques are techniques that have been used since the Victorian Age. The class is eight hours long. For the first period, everyone receives a frozen rat on a plate with a scalpel and all the equipment required to skin it. We then spend the morning learning a little bit about anatomy, ethically sourcing, laws about using animals, collecting carcasses that you find on the street (which is not legal) and just sort of talk about what’s involved if you want to do this more than this one time.

Question: Let’s go through that. The first step, skinning. You know the expression, there’s a million ways to skin a cat? Does the same apply for rats?

Answer: There are definitely several ways to skin a rat. I tend to use the same methods. I go in through the back. I like to keep it so that, when the rat is skinned, it’s not really a mess. You’re not puncturing the stomach and there are no guts flying everywhere. What you end up with is kind of just like a naked piece of meat. … It’s really just like if its clothing had been taken off.

Question: So the muscles and skeleton and the guts are all intact as a hunk of meat on the side?

Question: Then, step two is stuffing, right? What does that entail?

Answer: Basically the rat is stuffed with a little bit of cotton balls, a little bit of Poly-Fil (fibre), and there are some pipe cleaners in there that help you to articulate it once it’s stuffed.

Question: OK, and after that I guess you sew it up.

Answer: Yep, then you stitch up. There’s only one clean incision, all the way down the back. And then posing: It’s really a matter of personal preference. Some people prefer to just have a natural mount, where there’s just a rat standing on a wooden base. Some people like to get a little bit more whimsical with it and create entire scenes.

A really good reference for one of the Victorian-age taxidermists is Walter Potter. He used to do really elaborate dioramas of whole classrooms. He used bunnies and mice and he also did some work with rats.

Question: For you and for this class, why rats? Why not another animal?

Answer: Really, if you know how to skin a rat you can do a mouse up to a small rabbit. … Rats were just logical. And people won’t be too freaked that it’s not a cute little bunny.

Question: How did you get into home taxidermy?

Answer: As far as being interested in taxidermy, it’s sort of been a decade-old dream. … I have quite an extensive collection of older pieces that I’ve been collecting for the past 20 years and have done repair work on them. Finally I just decided — you know what? Let me just start with some small animals and see. I wasn’t sure if I’d be able to stomach it, so I just really started from scratch this year.

Question: And why have you started giving these sessions?

Answer: Taxidermy has become a little bit trendy. I think it’s also a good lesson for people to know how to skin an animal. If there’s an apocalypse or something, they’ll know how to skin things to eat. I don’t know. It just seems like the timing, the timing just felt right, really.

Question: For you personally, what is it about this that you’re into, that speaks to you?

Answer: I’ve always been an artist, a morbidly curious artist, I suppose … I’m an animal lover. Taxidermy in my art just seemed to be a natural progression.

This is what Reddit users have to say about the below picture. 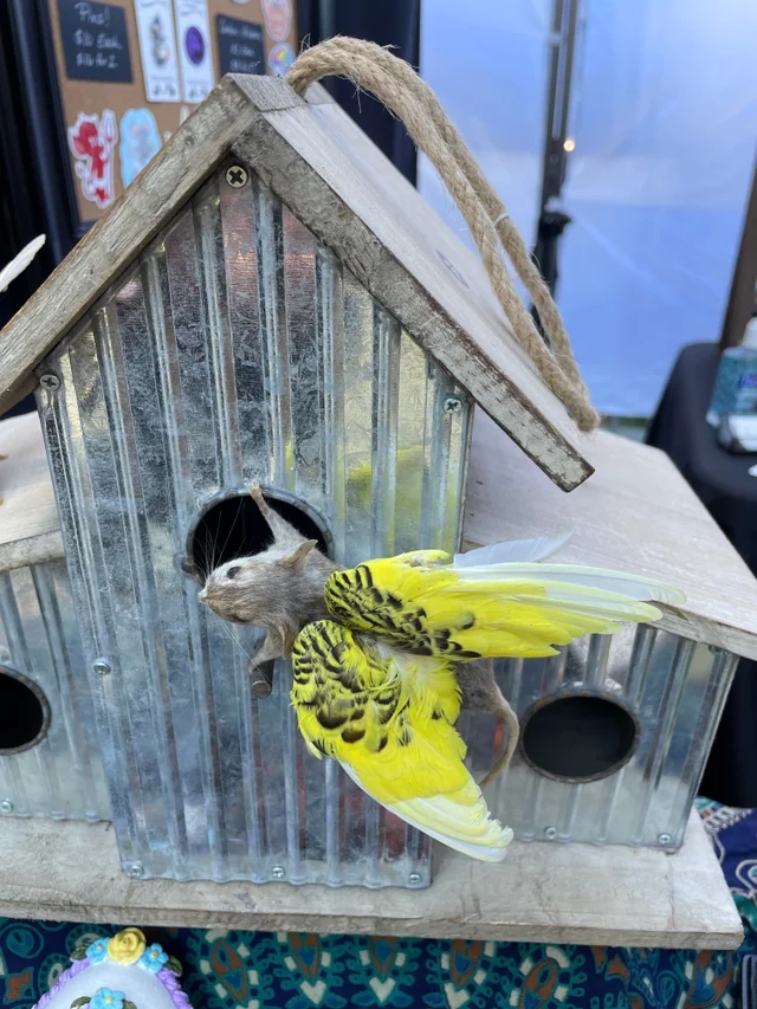 Upwherewebelong shared his opinion about Ankixa Risk, work, "Mice and rats she catches? Then murders them and stitches them together with other animals? I hope this person is on some kind of “red flag” list."

Grekkoplef also showed his anger, "This is really fucked up actually. Based on the colour of those budgie wings, there is no way it was caught in the wild; which means she went to her local petshop, got the budgie whereafter she slaughtered it to make this abomination. Disgusting."

Juniper Rainz explained that from where she got the wings, "the budgie wings could've been donated from a pet owner or pet shop after they lived out their lifespan, I know of another shop that does the same thing."

What Is Ankixa Risk Business?

Ankixa Risk and Jessica Lee, her business partner at Casual Taxidermy, are a part of the taxidermy revival movement, which is being spearheaded by women. They provide rat-stuffing workshops for everyone, from corporate team-building exercises to couples out on dates.

Where Does She Get The Rats For Her Work?

The rats are obtained from a reptile zoo; after being used for their pelts, the rats are returned to the zoo as food. She also accepts specimens from hunters as well as roadkill or leftovers from moral farms, provided they use every portion of the animal or give her the meat.

What Risk Has To Say About Her Work?

"We're working with animals that were part of the food chain that maybe never got to see life past that food chain," says Risk.

Ankixa Risk, a local artist who taxidermies rats and mice, acknowledges that not everyone enjoys this, but claims that most people are receptive to her ideas.

In some communities, taxidermy is even gaining ground and becoming something of a trend.

Have you heard about how mirrors are made?