A Mysterious And Gigantic White Blob Was Found On UK Beach 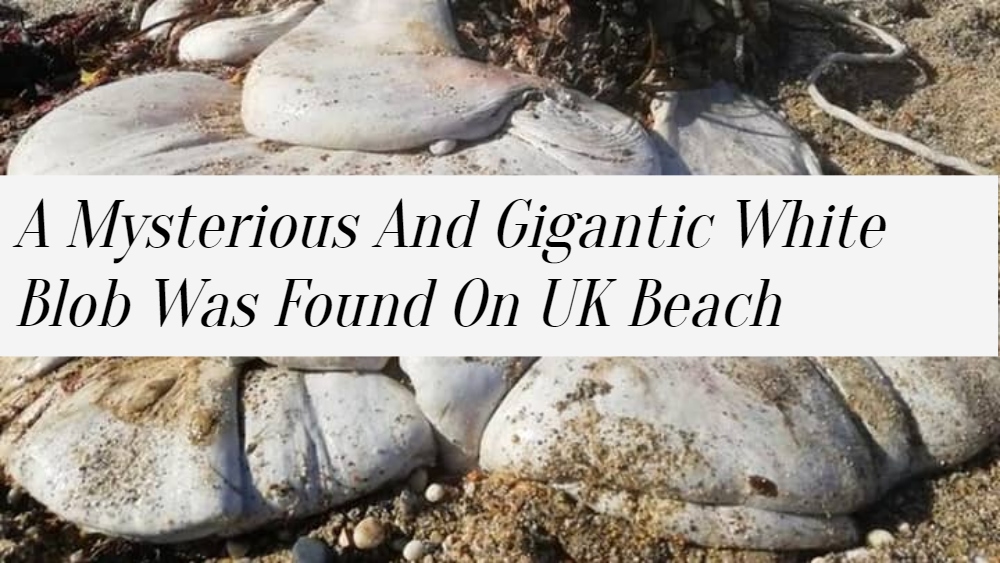 A mysterious and gigantic white blob was found on UK beach. When did this happen? This happened in November 2022.

A mysterious and gigantic white blob was found on UK beach by Helen Marlow. Helen Marlow was walking her dog on Marazion Beach near Penzance, Cornwall, when she came across the mysterious white mass topped with a clump of seaweed.

Observing a massive, faceless white blob on a British beach is nothing out of the ordinary; yet, this blob was unique.

I discovered it on the beach at Marazion at around midday as the tide had gone out. I had no idea what it was; it just looked like a huge mass of something organic. My dog went wild; it seemed quite fresh, with no distinctive tears or damage, and had no nasty smell. I really had no idea.

The blob was approximately 1.5 meters wide and 30 to 40 centimeters thick. It was odorless and showed no evident indications of damage.

Helen, seeking answers, took her husband's advice and uploaded her photographs to a marine research group on Facebook.

After sharing photographs on the British Marine Life Study Society's Facebook page to see if the general public could spot any identifying characteristics, Helen got the answer. And it turned out they did have answers: a variety of them.

One visitor said, "It looks like a weather balloon that's filled with sand." Another said: "Wow, what a magnificent find. It looks like a placenta to me. It will be interesting to see what the inside looks like." While a third added: "Go back and cut it open!"

It's understandable that Helen Marlow didn't go back and cut it up, but scientists later found out that it was the whale's stomach.

Local marine biologists thought it could have been whale placenta, which would have been a very exciting discovery if it meant that a whale was born off the coast of Cornwall.

However, scientists from the UK Cetacean Strandings Investigation Programme (CSIP) determined that it was most likely a whale's gut or stomach.

"We often get marine mammals such as dolphins, whales, and porpoises, collectively known as cetaceans, washing up dead on our beaches at various stages of decomposition. So, this unfortunately wasn't an entirely unusual discovery, but it is a reminder that these animals live along our coastline and can become stranded."

A mysterious and gigantic white blob was found on UK beach. People were concerned about what was it. Some claimed it was a whale placenta, while others said it was a stomach or intestines, while yet others claimed it was a weather balloon. But, it was actually a whale's stomach as said by scientists.