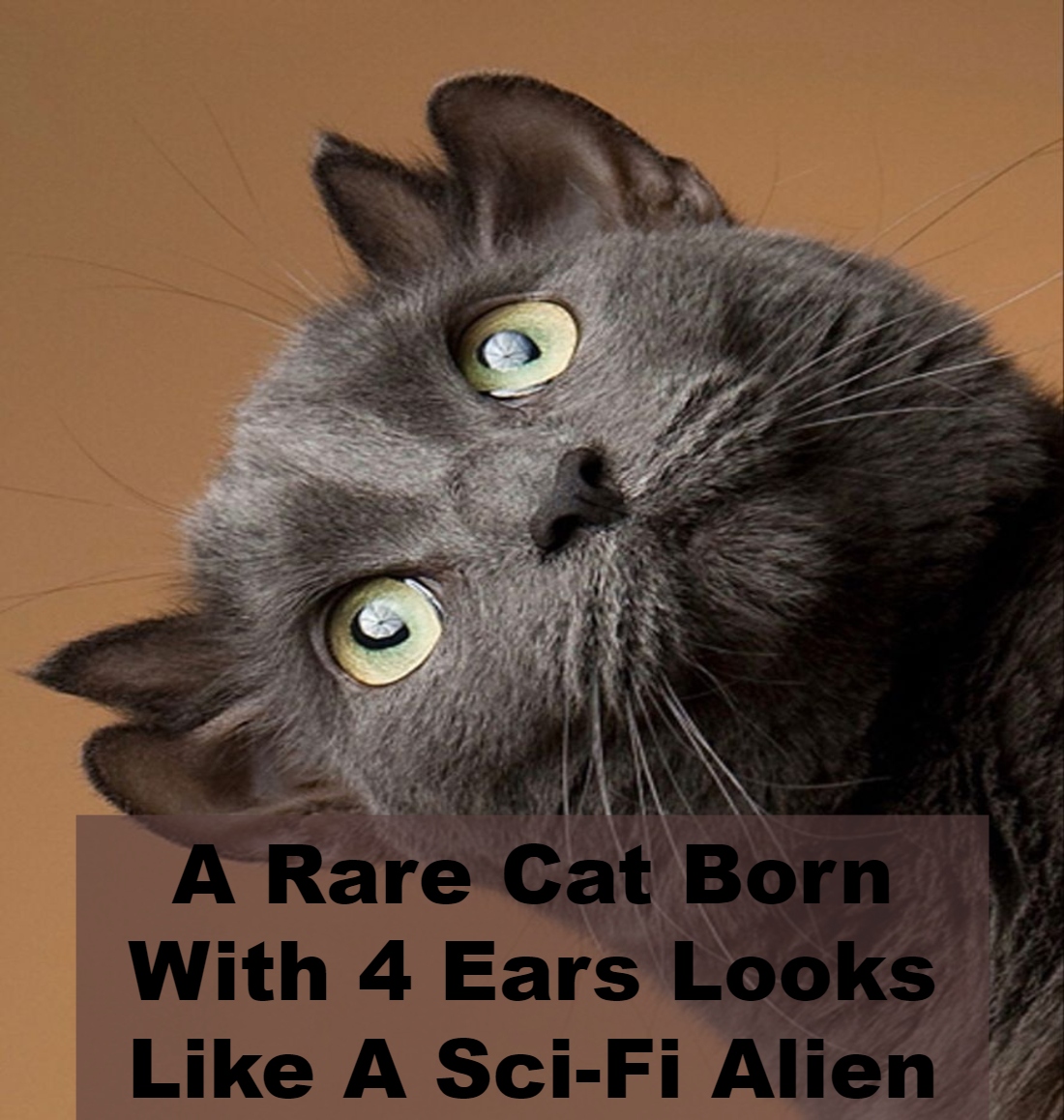 A rare cat born with 4 ears, named Midas from Turkey, is taking the internet by storm.

The Russian Blue cat is affected by a genetic abnormality that has led to the development of an additional set of ears on her head.

It has been said that the malformation can be traced back to a recessive gene mutation.

The fact that Midas has four ears isn't the only thing that makes her physique special.

The cat also has a charming heart-shaped mark in white that is located on its belly.

Midas, a rare cat born with 4 ears, whose name comes from the mythological king of Phrygia who was saddled with donkey ears but could turn everything he touched into gold, achieved internet fame with social media posts about her everyday life with Suzi and Zeyno, her friend dogs.

According to Resat Nuri Aslan, Midas's veterinarian, despite the fact that she may have a peculiar appearance, her ailment does not harm her health or her hearing in any way.

The fact that each of Midas's four earflaps has a direct connection to the ear canal is what distinguishes her from other cats.

The genetic mutation that caused Midas to be born with two sets of ears and a deformity in his jaw at birth has not prevented the four-month-old Turkish cat from becoming an internet phenomenon, as evidenced by the fact that he has a lot of followers across various social media platforms.

Canis Dosemeci and her family eventually took in the tiny kitten, Midas, who had been one of six kittens that had been born in a backyard in Ankara at the same time.

They claimed that they fell in love with Midas at first sight and wanted to take her in out of fear that her unique condition would make it more difficult for her to find a home.

“We have never thought of buying a cat, we just wanted to rescue a cat from the street, and we wanted to adopt her,”

Remarked Dosemeci, who also has two other Golden Retrievers at home named Zeyno and Suzi to keep him company.

Dosemeci expressed the hope that the popularity of Midas could encourage people to adopt animals as pets rather than purchase them from a store.

“People are so surprised, they can’t believe it,” Dosemeci said. “Everyone wants to come to see her, or they want photos.

Some people also find her scary, but generally people think her sympathetic.

The Russian Blue cat Midas enjoys playing with her toys and dozing down on her own bed, and she has adjusted quite well to her new environment since moving into her new home.

Canis's shoulder or chest is one of her go-to resting places when she needs to get some sleep.

According to Ms. Dosemeci, the kitten's four ears do not interfere with its ability to hear.

"She is a very playful cat. But very friendly as well," she said. "She sleeps all day and is awake all night."

There are some gorgeous four-eared cats (Yoda) out there too, and it's not unheard of for them to exist.

Cat With Four Ears And One Eye - Frankenkitten

In the year 2018, a cat with four ears and one eye that went by the name Frankenkitten became the spokesperson for an adoption drive for rescued animals in Australia.

People just can't seem to get enough of lavishing their love and attention on these itty-bitty cats, which may be because the existence of four ears is a benign mutation that doesn't appear to have a negative impact on the cats' lives.

Because of this, it should not come as a surprise that Dosemeci's decision one month ago to create an Instagram account for Midas resulted in the kitten becoming an overnight phenomenon.

She has about 325,000 followers on Instagram, many of whom are enamored with the small cat's big, wide eyes, extra pair of ears, and a heart-shaped patch of fur on her chest.

A Reddit user Accomplished_Idea957 said, "I think that the extra "fold" that cats have are developed into full , are fullon ears for this one."

Another Reddit user asked a very important question, "Are they all functional?"

To which Reddit user, jessybean answered, "The smaller ears would most likely have very underdeveloped inner parts, if any at all.

Can Cats Be Born With 4 Ears?

Yes, they can have four ears due to undeveloped genes.

Yes, they are real. A peculiar genetic abnormality caused the cat to be born with four ears instead of the usual two. The end result is two little ears that are situated in front of the standard pair of ears that are normally found on a cat.

What Is Midas Cat?

Midas is a kitten who is four months old and has four ears. Canis Dosemeci is the owner of the kitten, which was born with a rare genetic mutation that gave it a deformed jaw and an extra little ear in front of each of its larger regular ears.

Do you follow Midas, a cat born with 4 ears on Instagram? She is super cute. What are your thoughts?

Have you heard about cyclops?