Heartwarming news as Jeff Bezos is set to become the first ever trillionaire.

It’s hard to feel happy during the lockdown and life-threatening pandemic that’s consisting to sweep the globe, but every now and then you hear news that makes you realise there is some good out there.

Everyone’s favourite guy, Jeff Bezos, has managed to defy the odds and make some more coin, which has edged him ever closer to becoming the world’s first trillionaire.

According to Comparisun, the Amazon founder is on track to to be the world’s first trillionaire by 2026, which is very lovely for the little slaphead gargoyle. 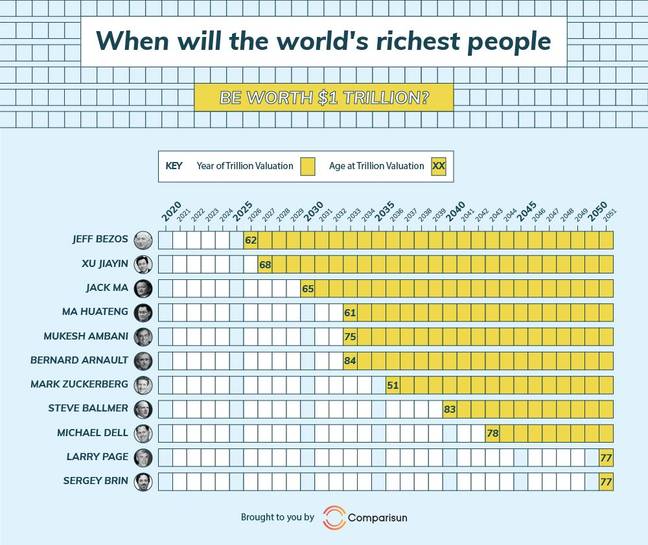 Will Jeff Bezos be the world’s first trillionaire?

Comparisun collated data from the last five years of the Forbes Rich List and calculated the growth of Bezos’ wealth. Currently, he’s estimated to be worth $140bn (£112bn) and could see himself as the world’s first trillionaire in 2026.

If that all goes through for Jeff, he’ll be 62.

Similarly, Facebook owner and global weird guy Mark Zuckerberg is set to become the world’s youngest trillionaire in 2036, when he will be 51-years-old.

How nice for both of them.

The projection has sparked anger on Twitter, with many noting how there are countless people financially struggling during the coronavirus pandemic as Bezos rakes in billions of dollars.

If Jeff Bezos paid his fair share of taxes and paid his workers a starting salary of 80k a year, gave them awesome healthcare, 6 weeks vacation, maternity leave, and sick pay, I might be slightly less disgusted by his trillionaire status.

Jeff Bezos is set to become the world’s first trillionaire and y’all out here STILL defending capitalism as if you’re billionaires and this exploitative system is actually working for you. 🤦‍♂️ #RIPCapitalism

Jeff Bezos is about to become the world’s first trillionaire while we’re about to enter a depression pic.twitter.com/901vsfmD5p

Previously, the Amazon-owner made a donation of $100 million to Chicago-based non-profit organisation Feeding America, who run 200 food banks across the country.

“Even in ordinary times, food insecurity in American households is an important problem, and unfortunately Covid-19 is amplifying that stress significantly.

“Non-profit food banks and food pantries rely in large part on surplus food from a range of food businesses. For example, many restaurants donate excess food. But during this time of social distancing, restaurants are closed, and many other normal channels of excess food have also shut down. To make matters worse, as supply is dwindling, demand for food bank services is going up.⁣

“Today, I want to support those on the front lines at our nation’s food banks and those who are relying on them for food with a $100 million gift to @FeedingAmerica. Feeding America will quickly distribute the funds to their national network of food banks and food pantries, getting food to those countless families who need it.⁣
⁣
“Feeding America is the largest non-profit focused on food security. Millions of Americans are turning to food banks during this time. If you want to help, the link to Feeding America is in my bio. They’d be excited and grateful for donations of any size“.