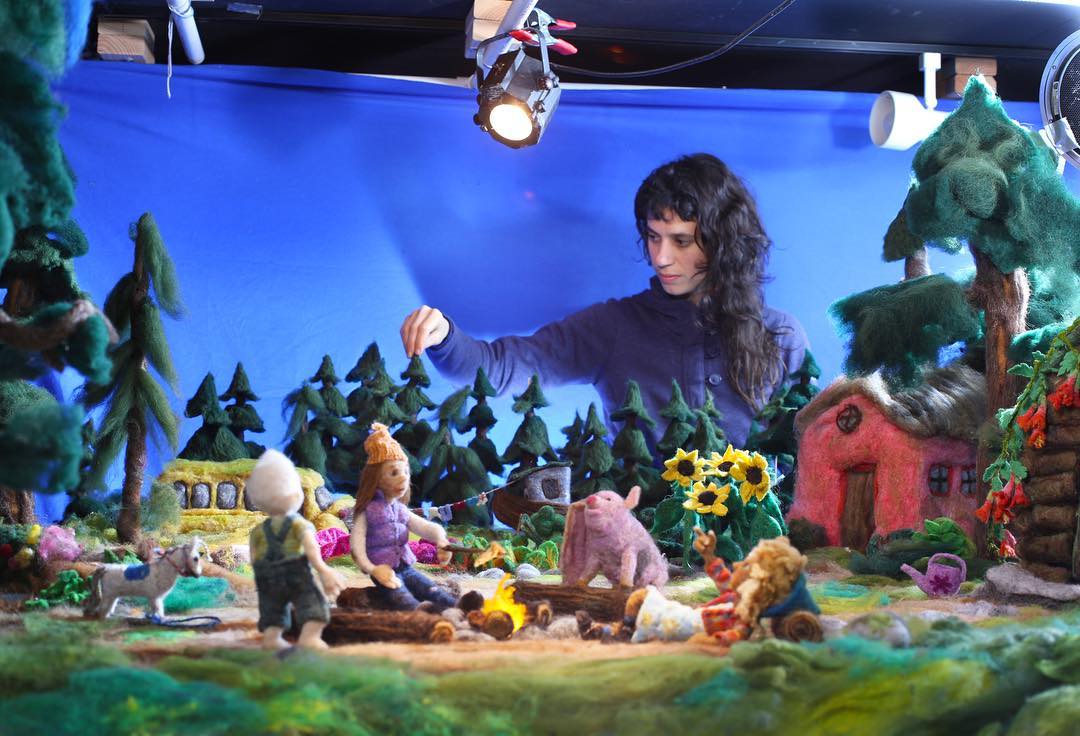 We have come across many creative artists that include felt materials into their work, but Andrea Love's Andrea Animates approach is truly one-of-a-kind. In her spare time, she creates common objects out of wool, which she then utilizes to create stunning animations. 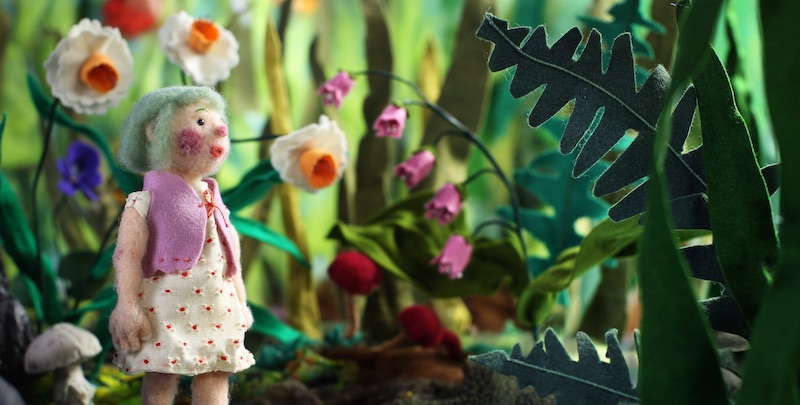 A fiber animated old lady in a forest

Andrea Love, who identifies herself as a stop motion animator, filmmaker, and fiber artist, recently put all of her skills on display by making a movie in which she makes a whole breakfast using only wool equipment and wool food, among other things.

After turning on the burner and heating the plate to red hot, she then places a frying pan on top of it.

After that, she makes a sizzling sound as she melts some butter and fried a few eggs.

And, to top it all off, Love prepares a steaming cup of tea to enjoy with her dinner.

She doesn't limit herself to food-related works, having previously created videos in which she painted with wool colors or adopted a chipmunk who had wandered into her studio uninvited.

Why Do Animators Use Stop Motion?

Stop motion animation (also known as stop-frame animation) is a type of animation in which each frame of the animation is taken one at a time, including actual objects that move between frames. When you playback a succession of photographs quickly, it gives the impression that the sequence is moving. 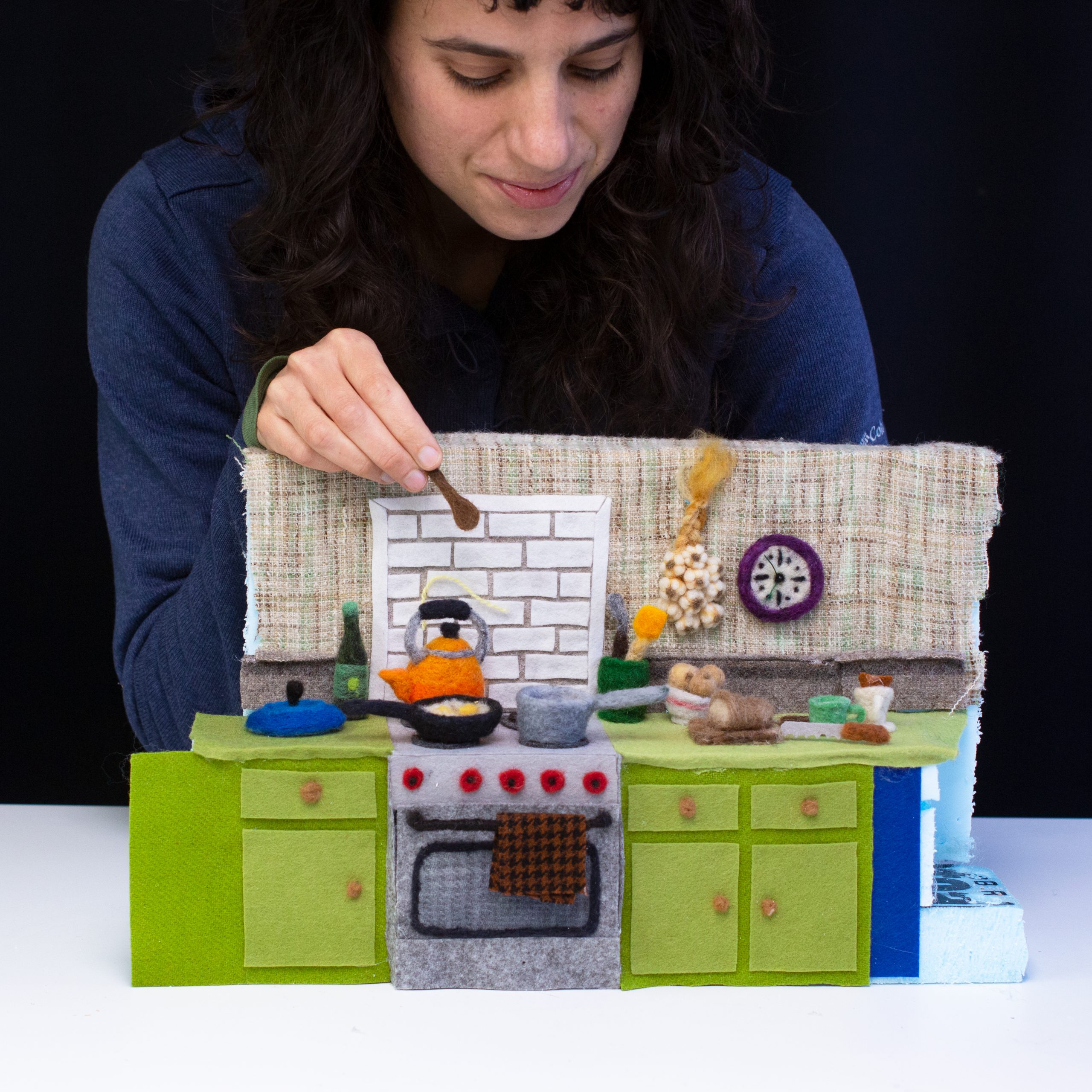 In addition to the cool treats, the animator and fiber artist has an extensive history of felted cuisine, which you can view on YouTube and Instagram handle 'Andrea Animates'.

How did you get into your creative field? Did you always love animation?

I loved movies as a kid but was not very interested in animation. I was in high school, working as a video store clerk when I discovered the surreal stop motion of Jan Svankmajer. I'm pretty sure his films inspired a lot of people to try it.

I dabbled in animation through college, doing independent projects in my dorm room, but didn't intend to pursue it as a career. I slowly eased into freelancing amid other odd jobs after graduating from college. And it eventually took over my life. I am a visual person, I love working with my hands, and I have a high tolerance for tedious activities. It's an ideal combination for someone working in stop motion.

It's about getting into "flow" isn't it? That delightful state where you're just focused and nothing else matters?

Yes, it is so important to find a flow state, or else it might drive you mad. I go through waves, where some days it is easier for me to focus, and others can be a little more painful. Music and podcasts can help unless the shot I am working on has dialogue.

It's best to make peace with the silence if possible. I have my hand in all aspects of production, from fabrication through animation, so my tasks vary quite a bit from one day to the next. I enjoy the variety, even if it feels a little chaotic.

Mental health is becoming a louder conversation. Are you happy it's being talked about?

Mental health is such an important conversation, and I hope it continues to be openly addressed. Animation can be a great vehicle to talk about mental health, both for its ability to put visuals to abstract ideas, and because it can create a vulnerability buffer between the person sharing their personal experiences and the audience.

I think animation can be at its most powerful when it is tackling challenging and complex issues. My work is often on the lighter side, but I've heard from many people that it brings them joy and laughter, which is also so important.

You tackled the subject of fear with your animated documentary with Dawn Dreyer a few years back. How did this come about?

I got connected with Dawn Dreyer through a mutual friend. She was beginning the process of making an animated documentary feature film, composed of interviews with people living with mental illness. I animated one story/section about a Chinese American man coping with memories of the Cultural Revolution. It was a powerful and intense film to work on.

Which fears did you resonate with the most?

In my own life, I have dealt with a fair amount of anxiety, especially in school. I am a very visual learner, which was often at odds with the type of education I was getting. I struggled in college, dropped out for a year, and then forced myself to get through it. I resulted in high levels of anxiety, depression and a big hit to my self-esteem.

I had just begun to animate by the time I graduated, but couldn't bring myself to pursue any more education. So I moved out to the Northwest and started working on a farm. It was a great way to reset and get in touch with myself again.

It's great to hear you found your own path. Is it true you work from your basement? What's that like? It must be a magical Wonderland down there.

Yes, I moved into my basement studio in 2016, and it's been such a blessing. I have two rooms – one for animation and one for fabrication. They are very different. The animation room is painted black, has no natural light, and is filled with tech equipment. The fabrication room has lots of natural light and is filled to the brim with colourful wool, art supplies and puppets. It felt like a lot of space when I moved in, but now I am quite cramped as everything seems to be multiplying around me. But I love it, and it's hard to beat the short commute.

There's great empathy towards people in your work. Is that why you chose wool as a medium?

Even before I focused on wool, I was trying to portray the more human side of people through my work. It's so common to exaggerate characteristics and movements in animation to create a cartoonish caricature, but I've never been drawn to that approach.

Since a lot of my early work was in the animated documentary realm, I was always trying to capture the essence of normal people, as if they were being interviewed for a normal documentary. Seeing that play out through stop motion can be so endearing.

Do you become attached to your characters? Are there any that stand out?

The characters that stand out the most to me are the ones that come from my own life. I did a lot of work for local businesses, and these are people I know personally, some of whom are my neighbours. So they are much more than just characters in my movies, and it's so fun to try and convey their personalities onscreen.

I've had to branch out from telling just Port Townsend stories, but some of those early characters, like woodworker Jim Tolpin and farmer Zach, have become classics in my community.

Do you enjoy using things like Instagram to put your work out there? A few of your movies have gone viral.

Instagram has been a hugely important tool for me. I resisted social media for a long time but knew that if I wanted to build a career – particularly as a self-taught artist living in a small town – I was going to have to start sharing online.

Pretty much as soon as I began posting about my work, I felt extra motivation from the support I was getting. I don't have the bandwidth to use too many platforms, so I have really just focused on Instagram rather than casting a wide net. I just started posting some of my videos on YouTube, which might be my next platform goal.

What were your biggest lessons last year?

Perseverance pays off. And 10% of what you do will get you 90% of the results. I have worked for months on end on projects that barely move the needle, and then I can whip out a little video in 3 days that changes everything. It's such a weird reality. Up until last year, I hadn't experienced big jumps in my reach and goals.

It has felt like a very long road, and sometimes I questioned whether it was worth it and if it was going anywhere. Now I have less doubt about the future, but I know there are still big obstacles and challenges ahead.

What will you be doing differently in 2020 if anything?

I hope to expand my team, to get more support and collaborate with other talented artists. 3D stop motion should not be a one-person job, and I know it's not sustainable to keep going at this pace on my own.

Finally, is there anything you’re not created and animated yet that you’ve wanted to? What is your current itch to scratch?

I have a huge project on my plate right now called Tulip. It's an eight-minute adaptation of Thumbelina, which I am making with children's book author and illustrator Phoebe Wahl. We have been working on it since August, and my number one priority is to finish it this year.

There are over 15 sets and 20 puppets involved in this production, so it has the potential to be pretty epic. All of my previous long-form animations have been for clients, but I have always wanted to produce my own film. So I am taking the leap with Tulip.

We have just launched a Kickstarter to raise the rest of the funds to complete the film. We have until March 12th to make our initial goal of 45K. The more money we raise through this campaign, the more help I will be able to hire. We are so excited about this project, and can't wait to see where it goes.

Stop-Motion Animations Made Entirely of Wool by Andrea Love

'Andrea animates' is the Instagram handle of Andrea Love, a stop motion and fiber artist. Her one video got viral in which she makes a waffle and a fried egg in a pan with her own unique style of fiber art stop motion. All the things used in that video are self made from wool in her own studio.

People just took it in the funniest way possible:

"I think there is a hair in my food."

"I think there's food in my hair."

Andrea specializes in stop motion animation and runs a full-service animation studio 'Andrea Animates' out of her basement in her house, where she does commercial work as well as short narrative and documentary films for clients across the world. In addition, she has been screened at film festivals such as Tribeca and the LA Shorts Film Festival.