Aperol Spritz Tinnies Are Being Sold At M&S

Marks and Spencer are now flogging Aperol Spritz in a can and I imagine that’s good news for a lot of you; especially Diane Abbott, who is 100% reading this.

I understand that this is a really wanky way to open an article, but some years ago I was skiing in Northern Italy and this wonderful Austrian bar I kept visiting, called Kronestube, sold this weird orange drink that looked like Tizer, but was getting people pissed.

A couple of years later and this drink called Aperol Spritz became popular in England and I’ve got to say, it’s not for me. It tastes like the white bit of an orange, doesn’t it? If that’s your bag then fine – I’m not going to tell you what to drink – but I’ll stick to beer, wine, gin, whisky, rum, a drink a friend and I invented called Muddy Water and… mead. Why not?

Anyway, if Aperol is your thing, but having to buy three separate drinks to make it isn’t, then worry not as M&S are now selling cans of the stuff. That’s right, Marks and Sparks are adding to their already extensive array of canned cocktails, with an entry that’s sure to make a cameo in your summer.

“Decidedly delicious; slightly bitter with a sweet hint of orange and a light herbal flavour; this flavourful new cocktail is made using a crisp sparkling wine and fragrant orange bitters. Open the can, close your eyes, take a sip and you are in Italy“.

That would be cool, wouldn’t it? What would you have to drink to get back to England? Presumably something like a can of gin and tonic, but I’m going to say a refreshing can of pre-warmed beef Bovril. Yum! 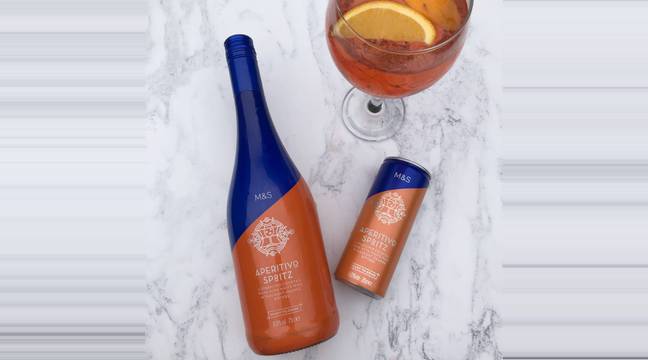 Naturally, as everything in M&S is own-brand, the drink is called Aperitivo Spritz, rather than Aperol Spritz. The description continues:

“Our Aperitivo Spritz is crafted to outstanding quality boasting completely natural colours and flavourings whilst packing a punch with an impressive 8% abv – we use only the finest quality crisp sparkling wine and bitter orange extract to give it that true Aperitivo taste“.

I can’t say I’ve tried an awful lot of Marks and Spencer’s canned cocktails, but it’s worth remembering that their gin and tonic is one of the worst to grace the earth, however their “Belgian Lager” is really nice, so I’m at somewhat of an impasse here.

To be perfectly honest, the only chance of me buying one of these is if I’m in need of booze and this is all they have left at the M&S in Waterloo Station.

Only time will tell, I suppose.