Atta's Mysterious Case Of Cutting His Penis While Dreaming 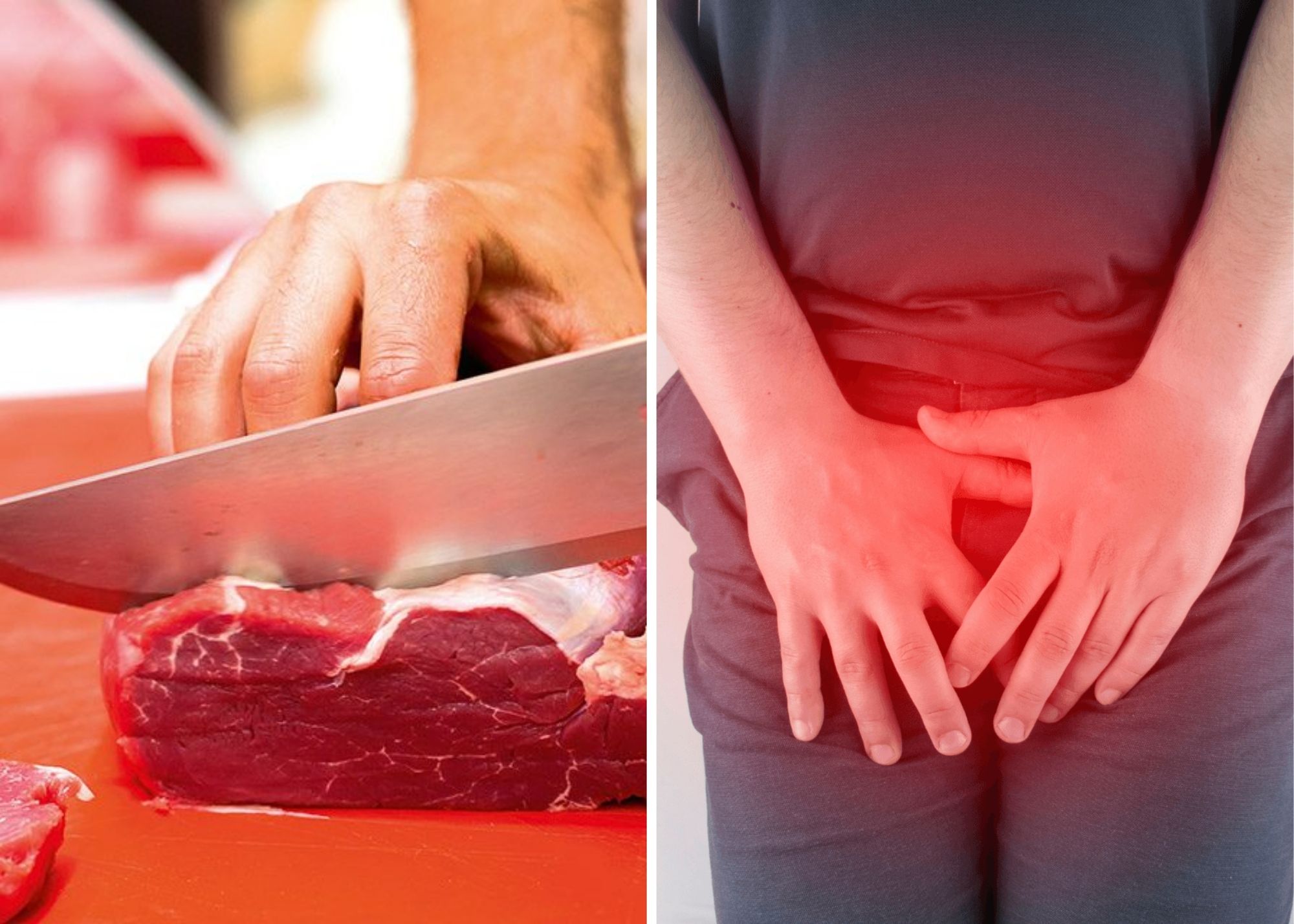 Of all parts of the body needed to cut off in a surgery, you wouldn't choose your penis to cleaved and cut, right?

However, there is a shocking story going around the Internet about Atta's mysterious case of cutting his penis while dreaming of chopping meat.

Kofi Atta was his name, and he was a Ghanaian farmer who hailed from the town of Assin Fosum in the southern region of Ghana.

The incident that took place on August 12 caused him to sustain life-threatening injuries.

The man shared that he was dreaming of slaughtering a goat, then later chopping the meat while helping his wife prepare an evening meal.

"I was sitting in my chair when I dozed off. In my sleep, I dreamt that I was cutting some meat in front of me."

But the 47-year-old farmer woke up because he felt sharp pains and heavy discomfort coming from his penis and scrotum.

Yes, you've read it right! He was cutting his genitals while dreaming of chopping goat meat.

Right now I dey hospital for here, all dem dey give me be fluids den some injections but I dey need surgery. I no get money to fuel ambulance wey go carry me go Komfo Anokye Teaching Hospital (KATH) for surgery. I no remember how I carry de knife, even me I dey confused.

Atta's wife brought "diapers to support her husband from losing his manhood" before taking him to a nearby clinic.

However, doctors have recommended that he get surgery, so he is currently trying to raise money for it.

He was later moved to the Komfo Anokye Teaching Hospital in Kumasi for additional care, but it's been reported that he's worried he can't afford it.

Adwoa Konadu, Atta's wife, was away on a trip when the accident occurred, and she learned about it from a neighbor who reached out to her to inform her of the shocking news.

When she got home, her husband was holding his penis while he was bleeding.

It was a horrifying sight.

The man who cut off his scrotum by accident while he was dreaming is getting medical care in a Central Region hospital right now.

The GHOneNews news video, "Man Mysteriously Chops Off His Manhood While Dreaming," has gone viral on the internet platform.

A reporter from the same media company posted online a news segment that had pictures of the man, who was said to be getting better. 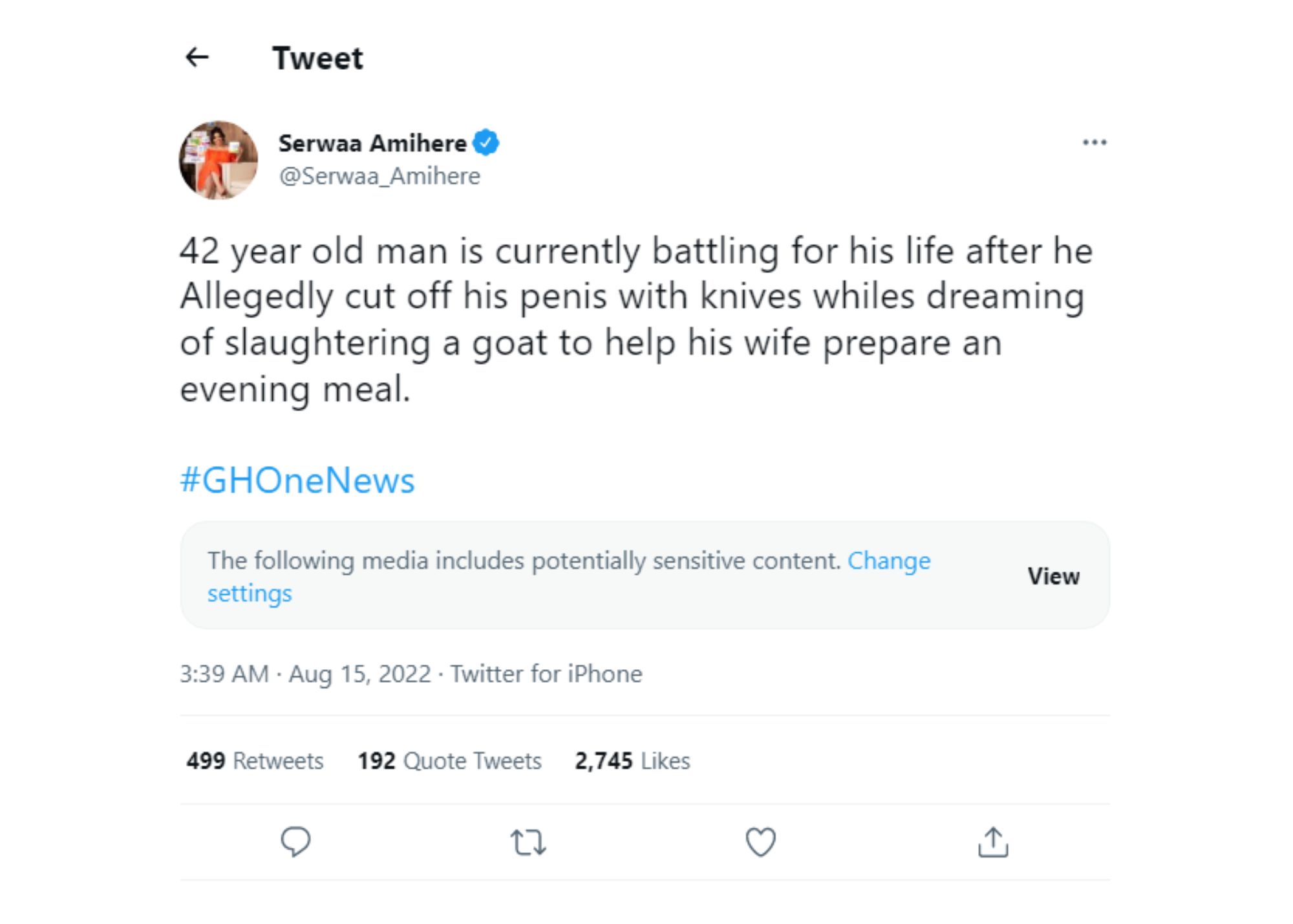 If you go to Serwaa Amihere's Twitter post, you'll notice that most of the comments are confused about Atta's mysterious case of cutting his penis while dreaming of chopping goat's meat.

Serwaa Amihere is a Ghanaian newscaster and broadcast journalist who works for GHOne TV.

Here are some of the Twitter comments you'll find expressing sadness and sympathy for the man who cuts off his own penis while dreaming of chopping meat:

Aww Africa Ghana my country. Only fooling or degrading dreams manifest in reality, if he had dreamt of money in his hands, it would have never come to reality

Someone said that even if the man dreamed of money, he would still be broke when he woke up.

Bossu, e no happen to you so you're free to say whatever you want to say. There are those who were shot in their dream and wake up to find gun wounds on their body. That one too what will you say.

This story is weird. He went to bed with knives or what.? It's sad but it dey funny me.

On the other hand, Kwame Segla Selorm posted his theory about the mysterious case of Kofi Atta of South Ghana:

This could easily be caused by somnambulism (sleepwalking). In this case he can do anything without even realizing it. Some people can even be sleeping while playing football or dancing.

Wife is away, Neigbour calls wife and wife returns to see this scene? Come on who even sleeps with a knife under his pillow. Police should investigate further.

On the other hand, the following comments you've read below are casting doubts and confusions:

Achimota Sarkodie asks: "How can you tell me this story?...The story is not clear."

"Unbelievable! Who sleeps with a knife?" Jeff Tony exclaimed.

That is a lie. What kind of confabulation is that? He is most likely protecting the person that did this to him. Such crimes of passion are almost always committed by the spouse, in this case, his wife.

Something is not right. Who sleeps with a knife in the hands. Ok, let's say he is a blacksmith and has a knife under his pillow for protection. But how can you not cut your hand but your genitals. There is a conspiracy in play. The wife should produce evidence she was away.

I Dey ask myself was the knife on his bed or he managed to sleep walk to kitchen or wherever the knife was to even identify it and took it back to the bed and cut himself lol. if his wife is not a witch, then he himself is wizard.

I think there's more to the story. So someone saw this scenery but couldn't take this man to the hospital, instead picked up a phone and call the wife who had travelled to come back from wherever she was and attend to the husband. Why, is the wife some sort of magician?

This is strange. During REM sleep, the brain releases neurotransmitters (GABA) that paralyzes specialized cells to make muscles inactive so the body can hardly act out of sleep.

Is Atta's Case Is Caused By A Demonic Possesion? 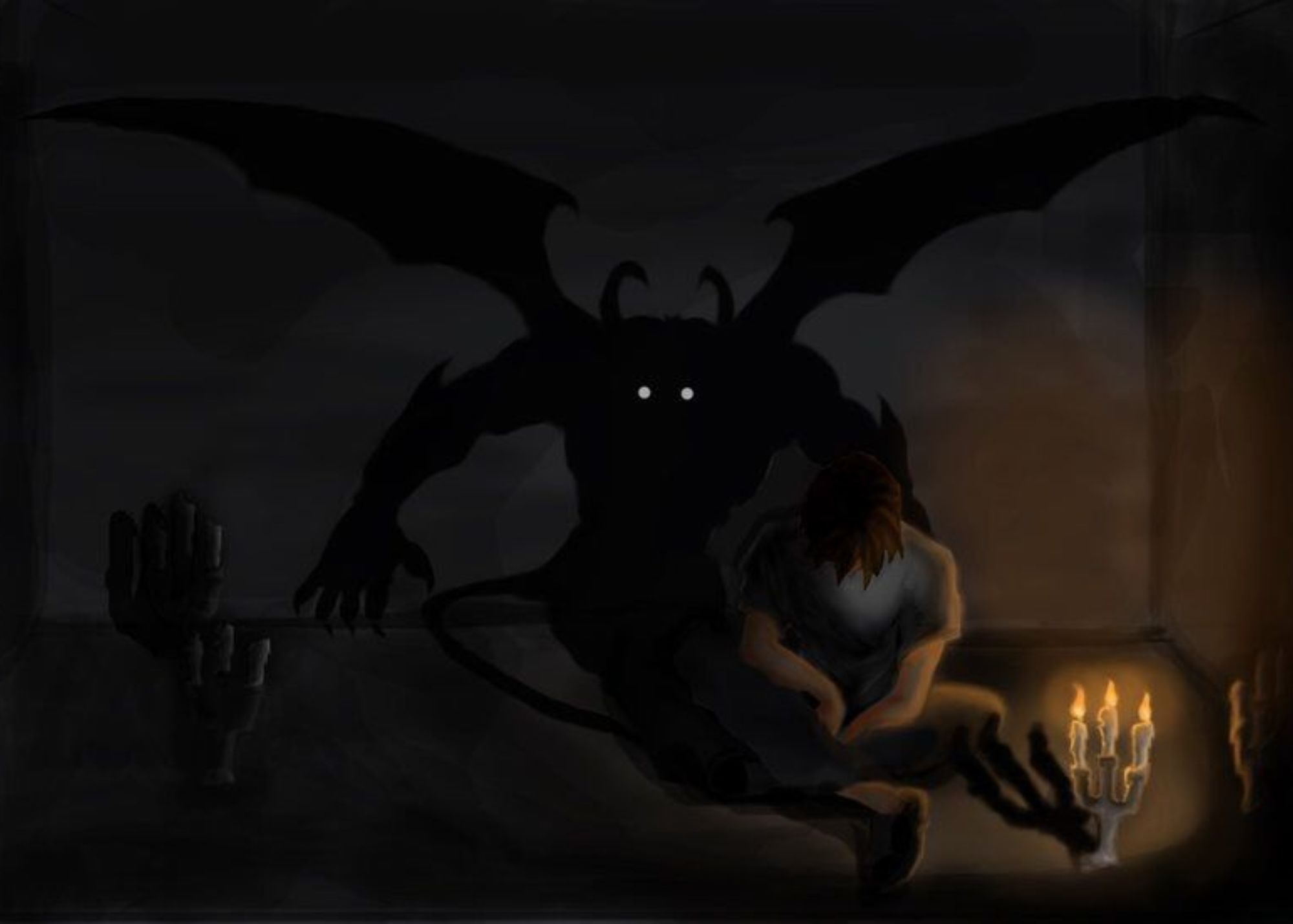 An illustration of a man sitting in front of a candle, his shadows forming a demon with wings and horns

In the Twitter comments, a user posted some of his reasonable theory, where he said that the man [Koffi Atta] was probably possessed by the demonic spirit.

This sounds interesting. Why? It is because Ghana is one of the countries that popularly practices spiritism or demonism.

Imagine a man wakes up from bed, go to the kitchen, strips down, takes a knife and chops his own dick off, whilst dreaming!! like how! to me it's either demonic possession or some one did it and he doesn't want to say! simple.

Research Directorate, Immigration and Refugee Board of Canada, Ottawa, cited a source titled An Article from The Ghanaian Chronicle, which reveals that the majority of Ghanaians have a strong belief in juju (also known as fetish), ghosts, dark magic, and evil spirits.

Because of this, a lot of Ghanaians go to fetish priests or other spiritual experts in their area for help.

The author found an article in the news about a man who cut off his penis after being possessed by a demon.

Word has spread from Akulivik about an exorcism that went horribly wrong, despite the small Hudson Bay town's reluctance to talk about an event that left one person emotionally devastated and another horribly traumatized.

Sources in the town confirmed that not long after two Southern evangelists came to town, a committee from the local Anglican church said that a local woman was "possessed."

One of the people who took part in the Akulivik exorcism, the woman's future brother-in-law, is said to have told a few others to "turn from their sins."

The man later tried to cut off his penis, which was a horrible turn of events.

He hurt himself and is now making a good recovery in Montreal.

The man is said to have given several different reasons why he wanted to have his penis cut off.

The farmer has not specified whether he suffers from any sleep-related conditions.

However, it has been theorized that he maybe affected by a sleep disorder known as parasomnia.

The behavior can happen at any stage of sleep, including when a person is falling asleep or waking up.

If you remember, a Twitter user named Kwame Segla Selorm wrote that Kofi Atta of South Ghana might have a sleep disorder when he wrote about the strange case of Kofi Atta.

If you have parasomnia, you might talk, move around, or do other strange things while you're sleeping.

Even though other people might think you're awake, you're actually asleep.

Most of the time, you don't remember what happened.

Also, some parasomnias can be dangerous because you don't know what's going on around you.

They can also have effects on your health, like making you feel stressed out.

Parasomnias can be treated, just like other kinds of sleep problems.

Some parasomnias happen during the first half of the night, when the eyes aren't moving quickly.

Others happen during REM sleep later in the night.

REM stands for rapid eye movement. where your eyes move quickly in many different directions but don't send your brain any visual information.

Sleepwalking, also known as somnambulism, is the act of walking around while sleeping.

It's a fairly common parasomnia, and it could also include sleeping, talking, or doing normal housework.

Sleepwalking frequently occurs early in the night. It can happen even during daytime naps.

Driving while sleeping is rare, but it is possible.

This is a type of sleepwalking that can be very dangerous.

What Happens To Kofi Atta Of South Ghana? 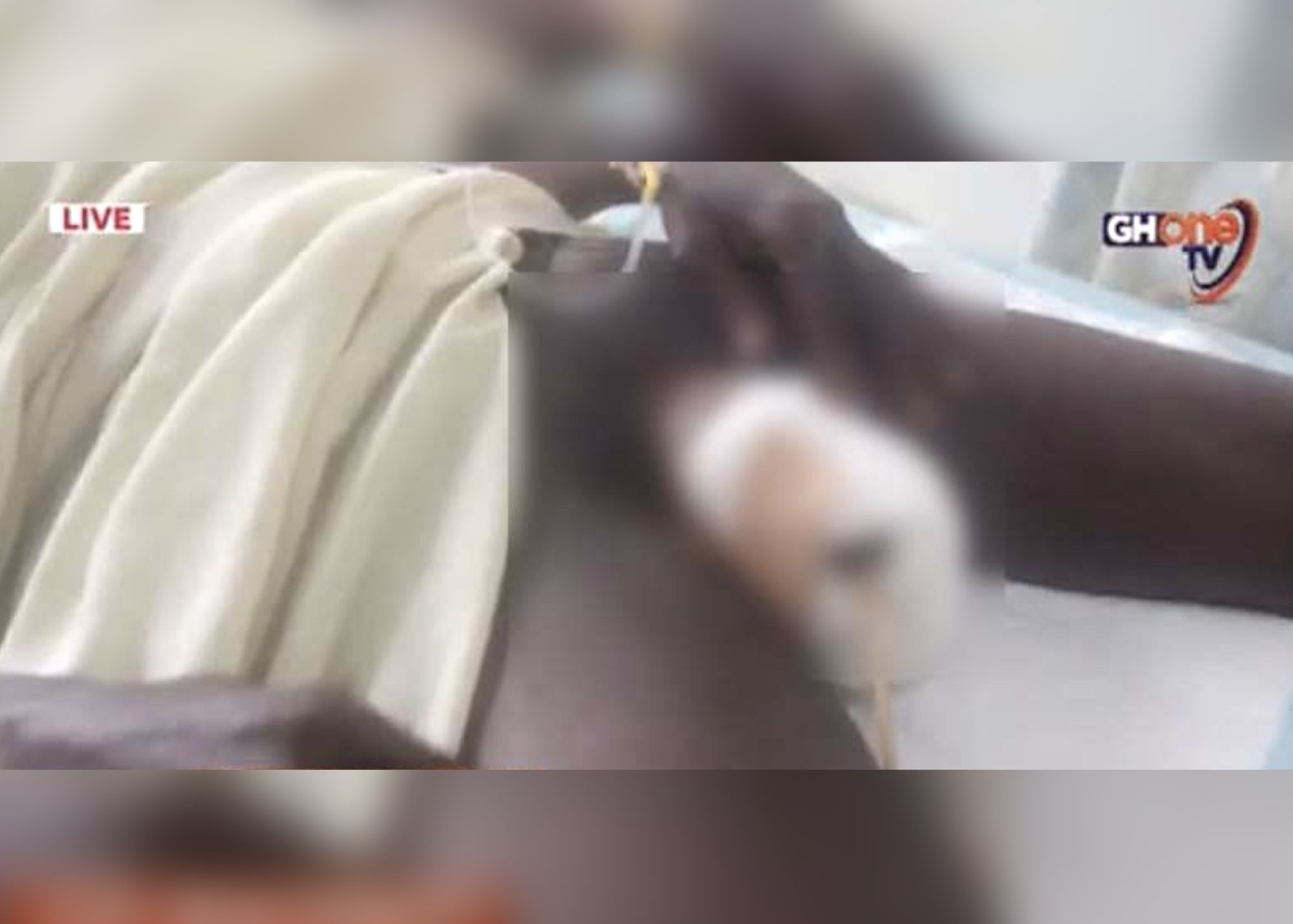 Kofi Atta, a farmer from the southern African country's town of Assin Fosum, was cut critically by a knife while he was only half asleep.

He claims that while having a dream about butchering a goat, he awoke to discover that his penis had been "cut off."

The answer is no. Even though his injuries are pretty bad, they are not thought to be life-threatening.

However, the surgery will have to be done at Komfo Anokye Teaching Hospital, and Atta will need to raise money to get care there.

When Kofi Atta Cuts Off His Own Penis, Where Is His Wife?

Adwoa Konadu, his wife, was away at the time and returned home to discover her husband bleeding and clutching his penis.

To stop the bleeding, she hurriedly ran to get him a diaper.

We have reason to believe that Atta's mysterious case of cutting his penis while dreaming of chopping goat's meat does not threaten its life.

Atta says that at the time of the accident, he was helping his wife make dinner while also cutting up the meat of a goat.

His screams drew the attention of his neighbors, who found him bleeding and sitting in his chair.

However, after more than six weeks had passed, various news outlets reported that the man had successfully undergone penis-attachment surgery.

Surprisingly, he was even able to get an erection as a result of the successful procedure.

He said he had no idea how he had been able to use a knife after falling asleep.