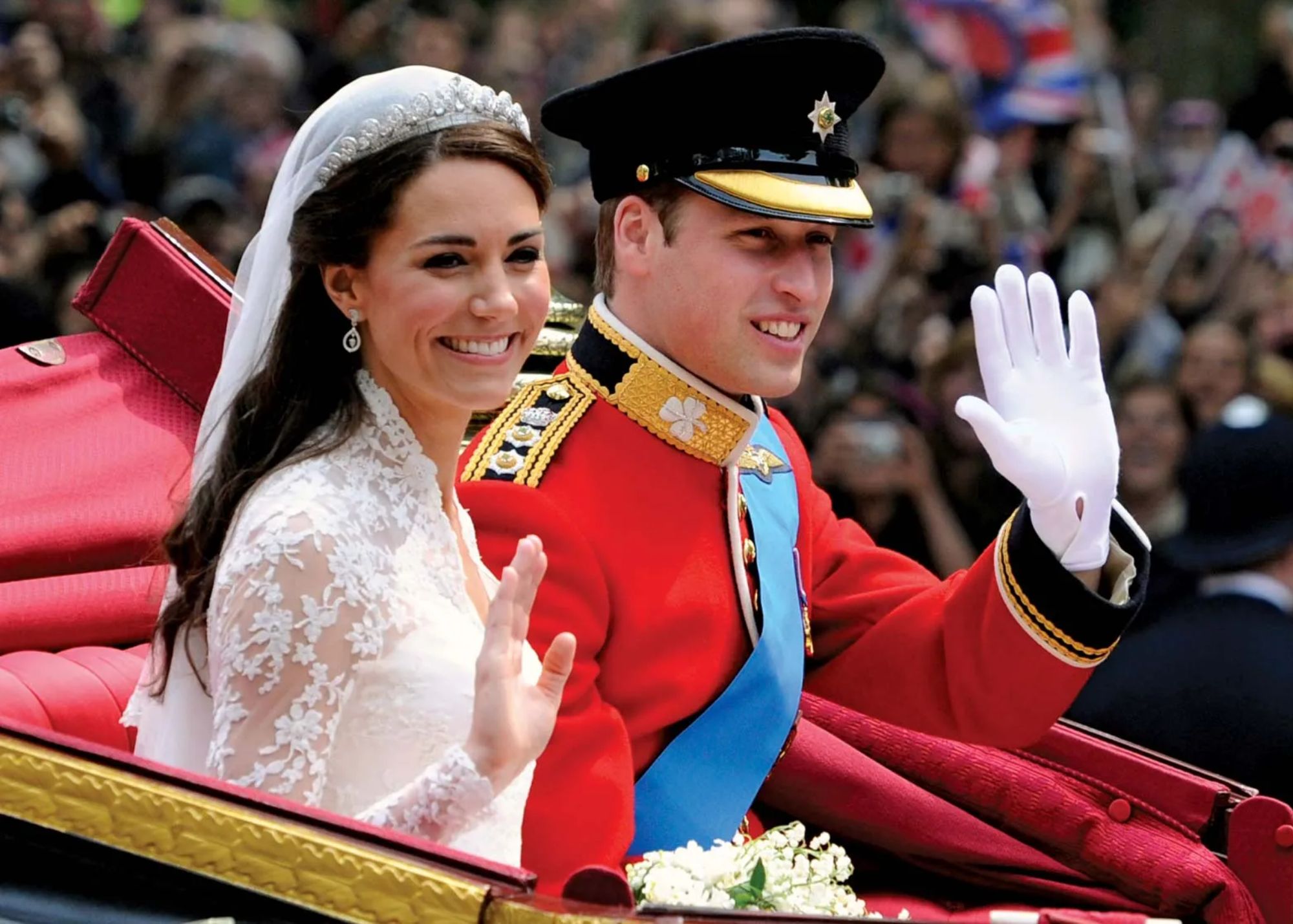 The royal wedding has been used to commemorate political ties, unite the kingdom, and celebrate the love of two soon-to-be husband and wife.

That is why many people all around the country are fascinated by royal weddings and obsess over them.

Despite the elegance and grandeur of this type of wedding, there are certain awkward royal wedding moments that make the general public feel uncomfortable.

We really understand why this happens because a royal wedding is a bit stressful, including the pressure of having the entire world watch as well as the diplomatic pressure.

The wedding of Princess Diana and Prince Charles is still the most-watched royal wedding in history, according to the Guinness World Records.

Over 750 million people watched the wedding.

That is more people watching than both the Olympic Games and the Super Bowl put together.

This topic is so interesting because many people typically think that a royal wedding is a close-to-perfection wedding ceremony, but it's not always true.

A royal wedding is a marriage ceremony in which members of the royal family participate.

Weddings of important royal family members are often treated as state events and get a lot of attention from people all over the world.

They have been a way to honor beloved people and welcome new people into both the country and the Royal Family.

They have also been a way to celebrate political alliances and bring the country together.

The most lavish marriages in history, from Queen Victoria's time to the present day, are detailed here. 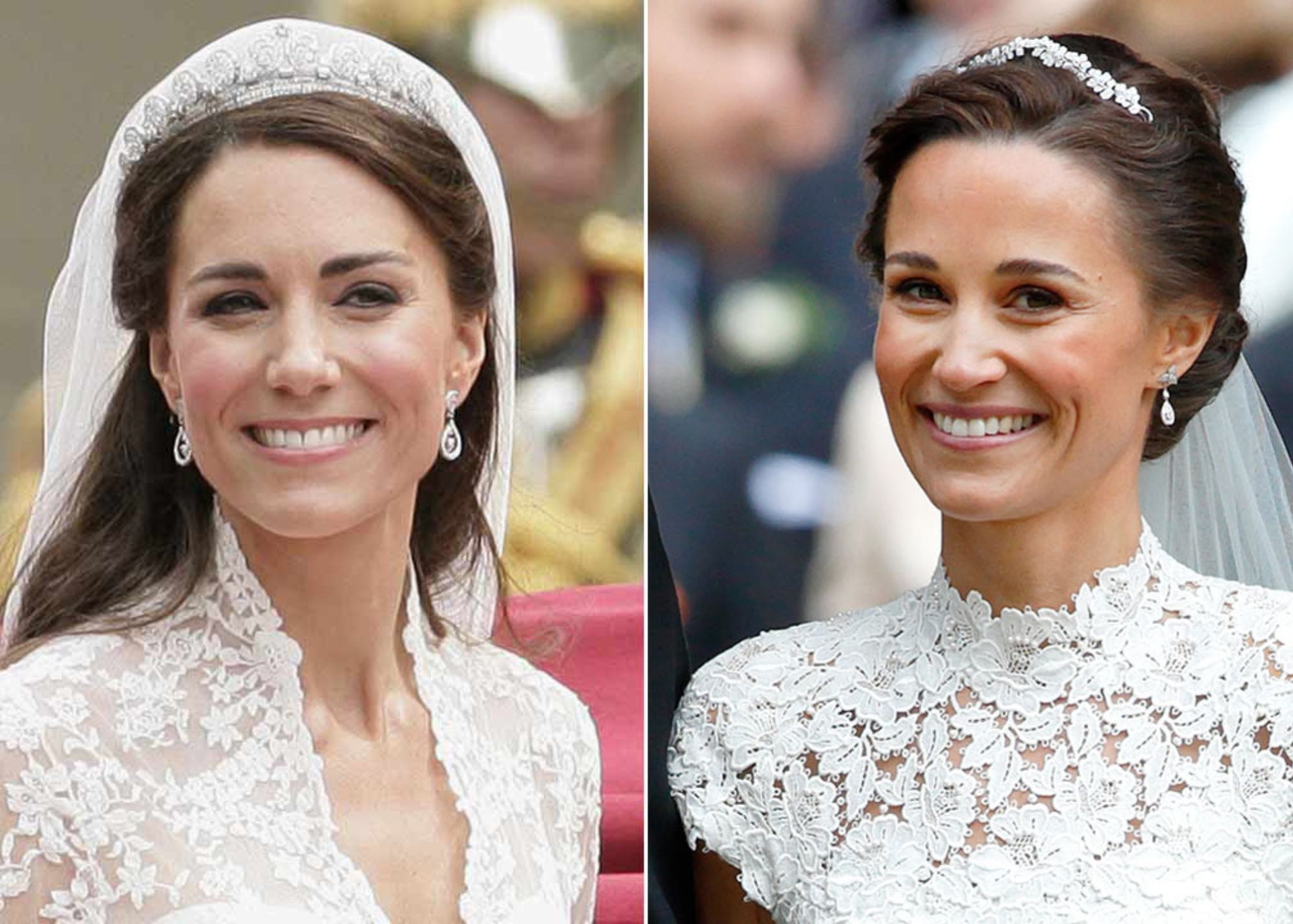 Kate Middleton's wedding to Prince William on April 29, 2011, was not only the most spectacular event in the royal family's history, but it was also a fashion show.

Kate wore a stunning Alexandra McQueen gown with a handcrafted lace bodice and a nine-foot-long train.

The design of the dress, which was kept under wraps until the big presentation in front of Westminster Abbey, was a collaboration between Sarah Burton and Alexander McQueen.

Sarah Jane Burton, OBE, is an English fashion designer who is currently the creative director of the fashion brand Alexander McQueen.

However, the most distinctive feature of Kate's look is not the dress but rather the way her hair is styled.

Kate's decision to wear her hair down defied a 350-year-old monarchical custom.

Ashley Pearson, a royal expert and commentator, said that people talked a lot about Kate's hair in the days before the event.

Ashley said that royal staff told Kate to put her hair up, but the Duchess did not follow their advice.

An updo is a hairstyle for women in which the hair is pulled up and fastened so that it stays out of the face and neck.

In the 2017 documentary William and Kate: The Journey, Ashley said:

Royal sources tell me that the royals indicated very strongly to Kate that they would prefer her to wear her hair up for this very special occasion. However, Kate had her heart set on wearing her hair down with long flowing curls, which is her favourite way to wear it, and actually William's favourite as well. They ended up compromising on her look.

The half-up, half-down hairstyle was the compromise, but Kate seemed to get her way during the second half of her wedding day.

Kate changed her hairstyle for the wedding reception by letting it all hang loosely over her shoulders in curls.

Royal tradition says that women in the Royal Family with long hair should wear their hair up on their wedding day, but those with short hair can let their hair down. 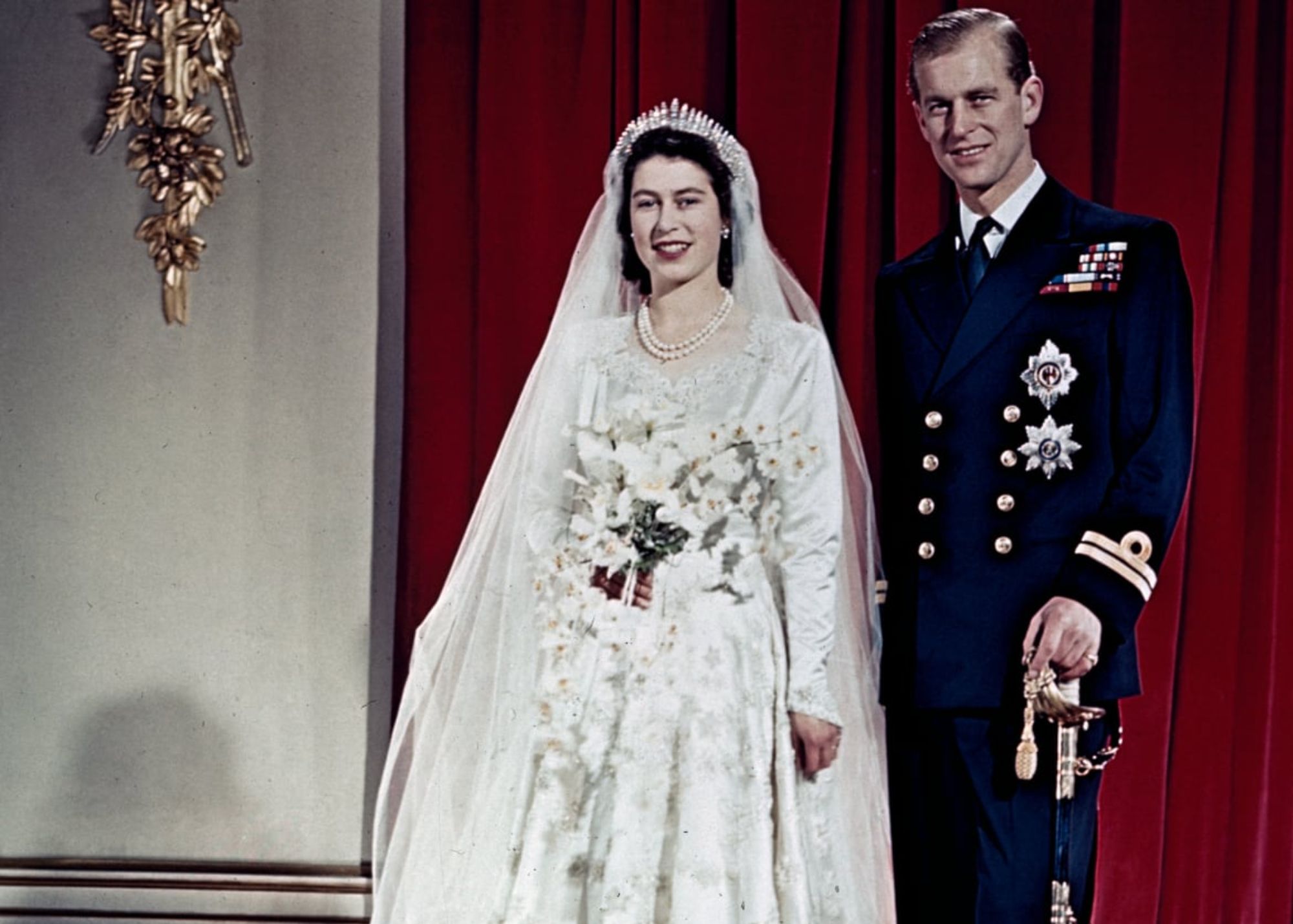 Elizabeth was getting ready for her wedding to Prince Philip when her hairdresser was trying to fix the Russian fringe tiara that her grandmother, Queen Mary, had given her.

The tiara broke just hours before the wedding.

Even more stress came from the fact that clips of their wedding were going to be shown on TV that day.

Because royal weddings are so carefully planned, there was no need for a backup tiara or glue, and the ceremony would not have to be moved.

With help from the police, the royal jewelers quickly took the broken piece and put it back together.

Photos from the day show that there is a small gap between the highest point of the tiara and the second point. 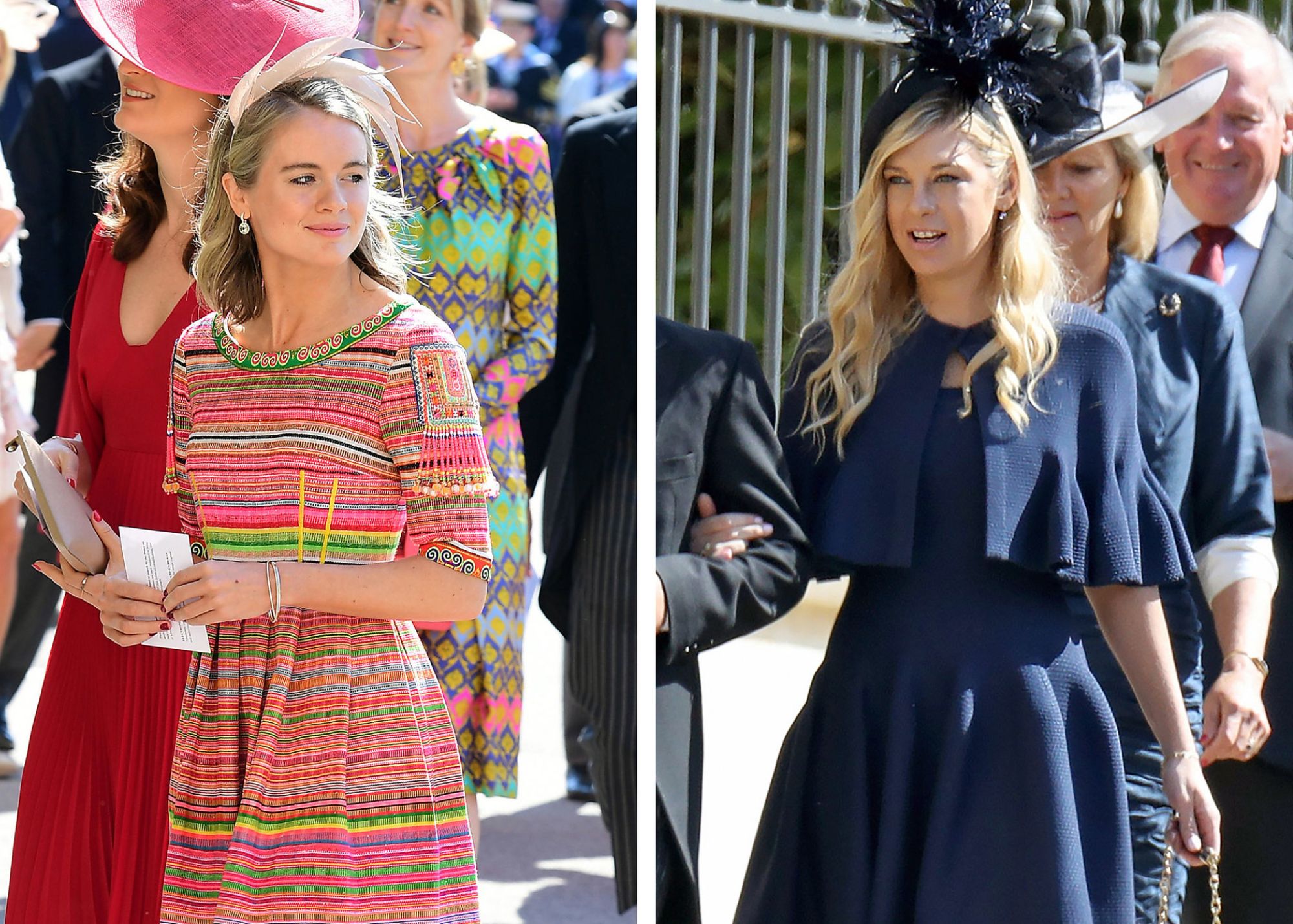 Cressida Bonas, in pink, and Chelsy Davy, in blue, are two of Prince Harry's exes

His ex-wives may have been the most unexpected visitors at Prince Harry and Meghan Markle's wedding.

Chelsy Davy showed up for Harry and Meghan's wedding, fascinators and all.

Chelsy Davy, who is from Zimbabwe and whose father is the wealthy Charles Davy, was Harry's girlfriend from 2004 until 2010.

The media frenzy that surrounded their relationship caused their connection to be sporadic, and both of them had to deal with continual invasions of their privacy as a result of the frenzy.

In the end, Davy didn't like the idea of being a princess, and she couldn't deal with the constant attention and pressure.

And of course, his next most serious ex-girlfriend, Cressida Bonas, a fan of scrunchies, was also present.

Before Meghan Markle entered the picture, Bonas was actually his most recent publicized ex-girlfriend before her relationship with Prince Harry, which lasted from 2012 to 2014.

According to reports, the relationship between the two ended in part because Bonas did not enjoy living the royal lifestyle.

Both of these women had significant relationships with Harry. 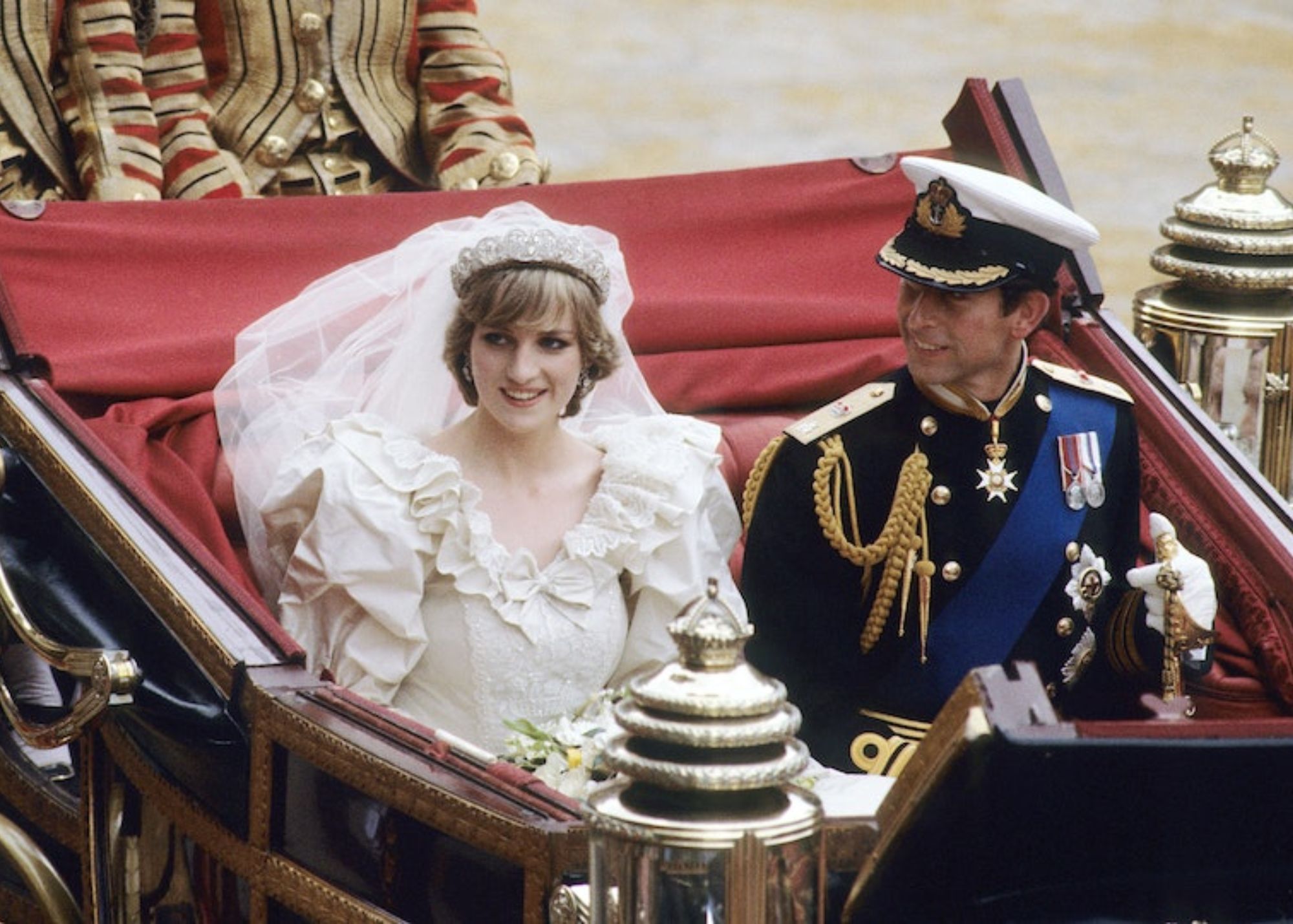 It's reasonable that Prince Charles and Lady Diana Spencer were nervous before their wedding, because a massive audience was eyeing their special day.

This royal wedding was held in front of 3,500 people at St. Paul's Cathedral and was seen by an estimated 750 million people around the world on TV.

Moreover, about 600,000 people also gathered in the streets near the cathedral.

There were reportedly several mistakes at the altar because of these nerves. For example, Diana is said to have used the wrong name when she said her vows.

Diana spelled the Prince's name incorrectly, referring to him as Philip Charles Arthur George rather than Charles Philip.

With the number of middle names used by each member of the royal family, it's not unexpected that the soon-to-be Princess of Wales made a mistake.

At another point in the vows, Prince Charles also made a blunder, referring to 'thy goods' rather than'my worldly goods.'

Clearly, a few misspelled words were the least of their concerns.

Even back then, Prince Charles was madly in love with Camilla Parker Bowles.

Let's not forget that Diana was just 19 at the time, and having the world's attention on her would have been quite stressful.

William Struggled To Fit The Ring On Kate

During the ceremony of Prince William and Kate Middleton's wedding, there was a comical small pause when William attempted to put Kate's wedding band on her finger, but he was unsuccessful.

Given the meticulous planning that goes into royal weddings, it begs the question: why on earth doesn't Kate's ring fit properly?

It has come to light that Kate selected the wrong size wedding dress since she underwent weight loss prior to the wedding and made a special request to the jeweler.

Moments At The Royal Wedding You Didn't See

The Royal Wedding Moments You Didn’t See on TV

The wedding of Prince Harry and Meghan Markle may look like a dream come true, but not all royal weddings have been as well-known or beautiful.

However, not all royal weddings turn into a dream come true, but the worst nightmare.

Here are some of the worst royal weddings recorded in history:

A French princess married the king of Navarre on August 18, 1572.

One of the worst massacres in French history happened because of the royal wedding.

The wedding happened during the French Wars of Religion, and because the bride and groom came from various faiths, it immediately sparked conflict in Paris.

King Henry of Navarre, her groom, was a Protestant, sometimes known as a Huguenot.

Because many affluent Huguenots traveled to Paris for the wedding, the royal Catholics saw it as a chance.

Only a few days after the couple were married in public, Catholics sent by the queen rose up and massacred at least 3,000 Huguenots in what became known as the "St. Bartholomew's Day Massacre."

The Drunk And Sobbing King George IV Weeps At The Altar

George, Prince of Wales (the future George IV), married his cousin, Princess Caroline of Brunswick, in 1795.

Like many royal weddings of the day, this one wasn't founded on romantic passion.

As George took his first look at his new bride, he cried and said that he was feeling unwell.

From then on, things started to worsen. George was so drunk on his wedding day that he needed two dukes to help him stand at the altar.

Even during the formal proceedings, he couldn't help but cry.

The Royal Wedding: The Bride walks down the aisle

What Was The Biggest Royal Wedding?

Prince Charles and Lady Diana Spencer were married in St Paul's Cathedral in 1981, in one of the most famous royal wedding ceremonies. It was the most expensive British royal wedding of all time, costing an estimated 70-100 million dollars.

Which Was The Best Royal Wedding?

Royals rarely married commoners in the past because it was tradition for Royals, especially high-ranking ones, to only marry other people who were also considered to be royalty. Royals who married far below their rank, called morganatic marriage, were sometimes punished.

You've reached the end of this article. Thank you for taking the time to read about the awkward moment at the royal wedding.

What can we learn from the things that went wrong on their big and important day?

This goes to demonstrate that mishaps can take any everywhere, even at a wedding for a royal family member.