Awkward Yeti Trauma Tickles The Readers' Humor Through This Comic 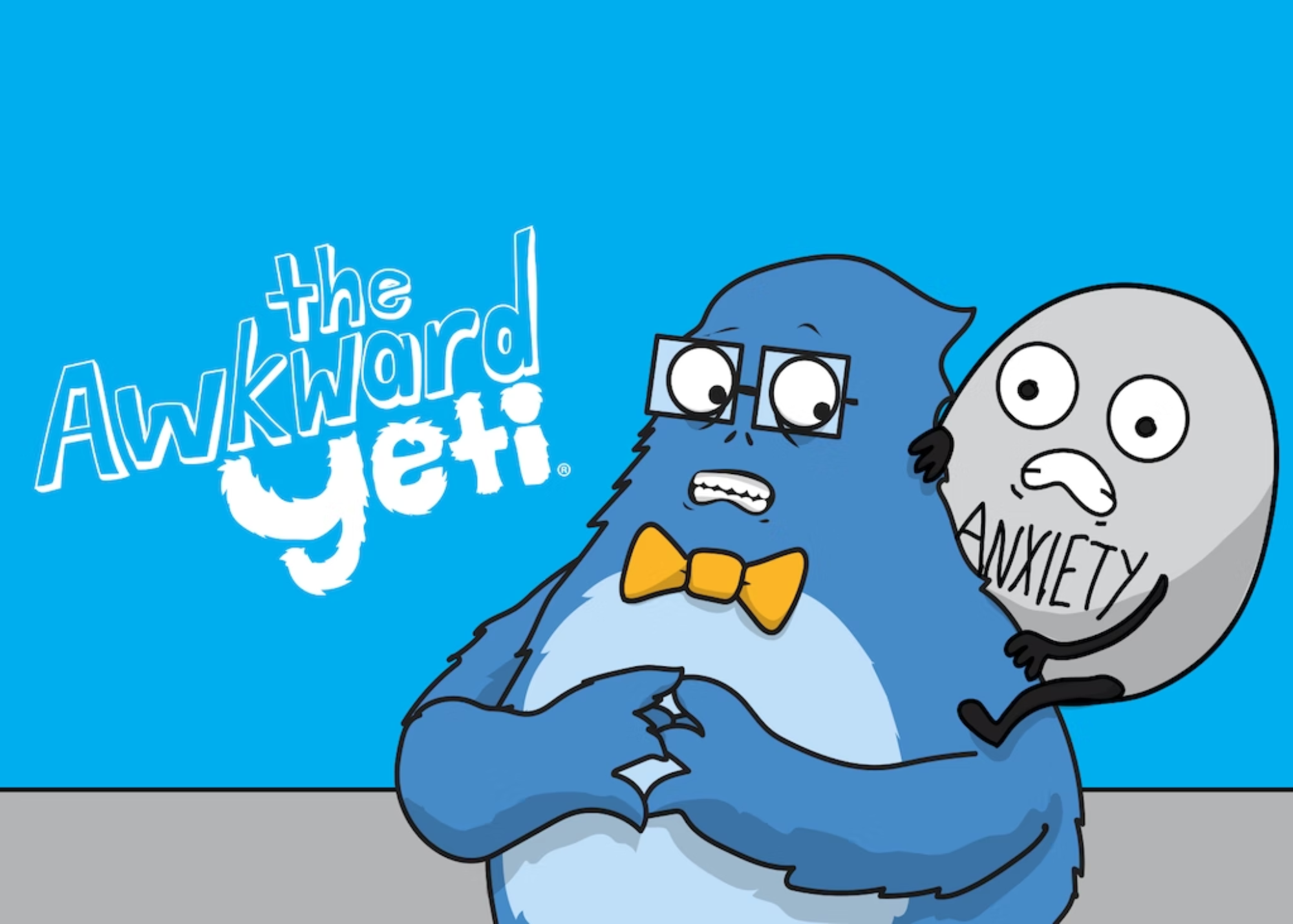 Nick Seluk, the cartoonist behind the Awkward Yeti trauma is responsible for both the writing and the artwork. The Awkward Yeti has become popular on social media, and huge kudos to his New York Times best-selling series Heart and Brain.

He now has to deal with the pressure of trying to entertain millions of fans online.

The picture below is an example of a hilarious meme comic related to our daily stress that is uploaded on Facebook, a social media networking site that allows users to connect with friends, family, co-workers, and others. The red-colored animated heart organ in the picture is carrying heavy loads such as past trauma, bad news, a pandemic, and stress.

Meanwhile, the second organ approaches the heart organ and says, "I think you're overreacting." As a result, the heart, which is carrying a heavy load, cries out loudly. 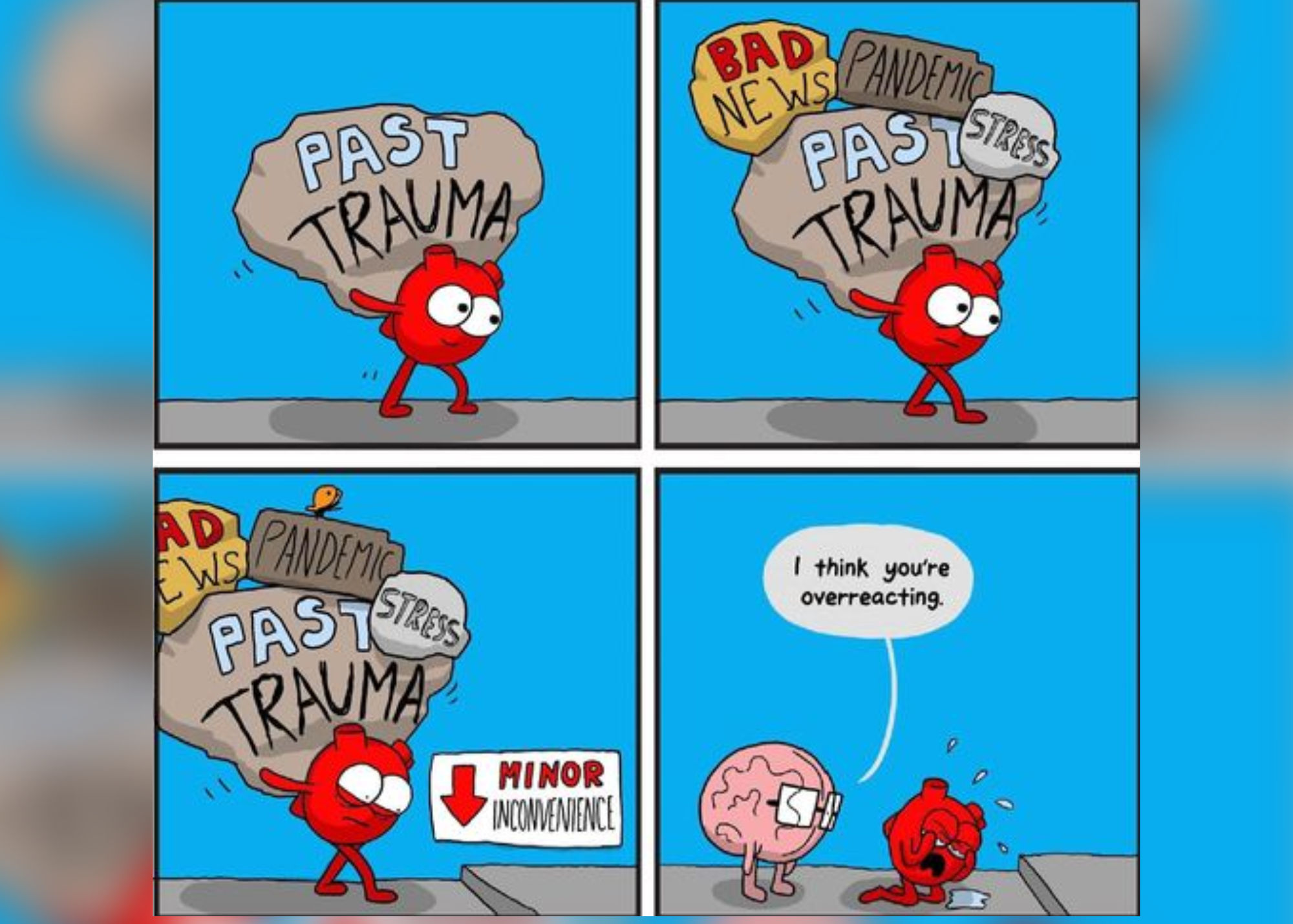 The animated heart carrying heavy loads such as bad news, pandemic and many more

Nick Seluck's posts garnered many hilarious comments from the users, such as Justina, who wrote a comment that reads:

This is actually how it works. If you see someone completely lose it due to a tiny issue/problem, that means they've been carrying way too much on their shoulders recently.

Violet Rhiannon commented: "This is super valid though! It's a known psychological phenomenon, that when we've been dealing with too much, we can't handle more until we have a chance to recover. Life hasn't been giving very many people that chance to recover lately, so everyone's bandwidth is much lower than usual."

Clara Tettey said that the comic strip represents her last year as he faces different challenges in life. She said in a comment: "This was me in December 2020. Burned out pretty hard. Off work for two months. Much better now. But this is literally how it went."

Anne-Kari Friedner shared: "This is absolutely me right now, just swap out 'minor inconvenience' with 'upset stomach & nerves about starting new job'. And yes 'new job' is a wonderful thing (for which I am grateful) but still stressful."

Eric Theisen mentioned: "I am pretty sure this is an excellent depiction as to why people should work to carry less of that stuff. Heart looks like an episode of Hoarders, just on an emotional level."

Lastly, Sian Hill, a user, expressed her thanks to this awkward yeti trauma and said in a comment:

"Thank you for creating and sharing this! It's so spot on! What a beautiful way of demonstrating the cumulative effects of stress and trauma carried, and being held in the body, and how our head brains (and others) look at and judge what we (and they) see on the surface." 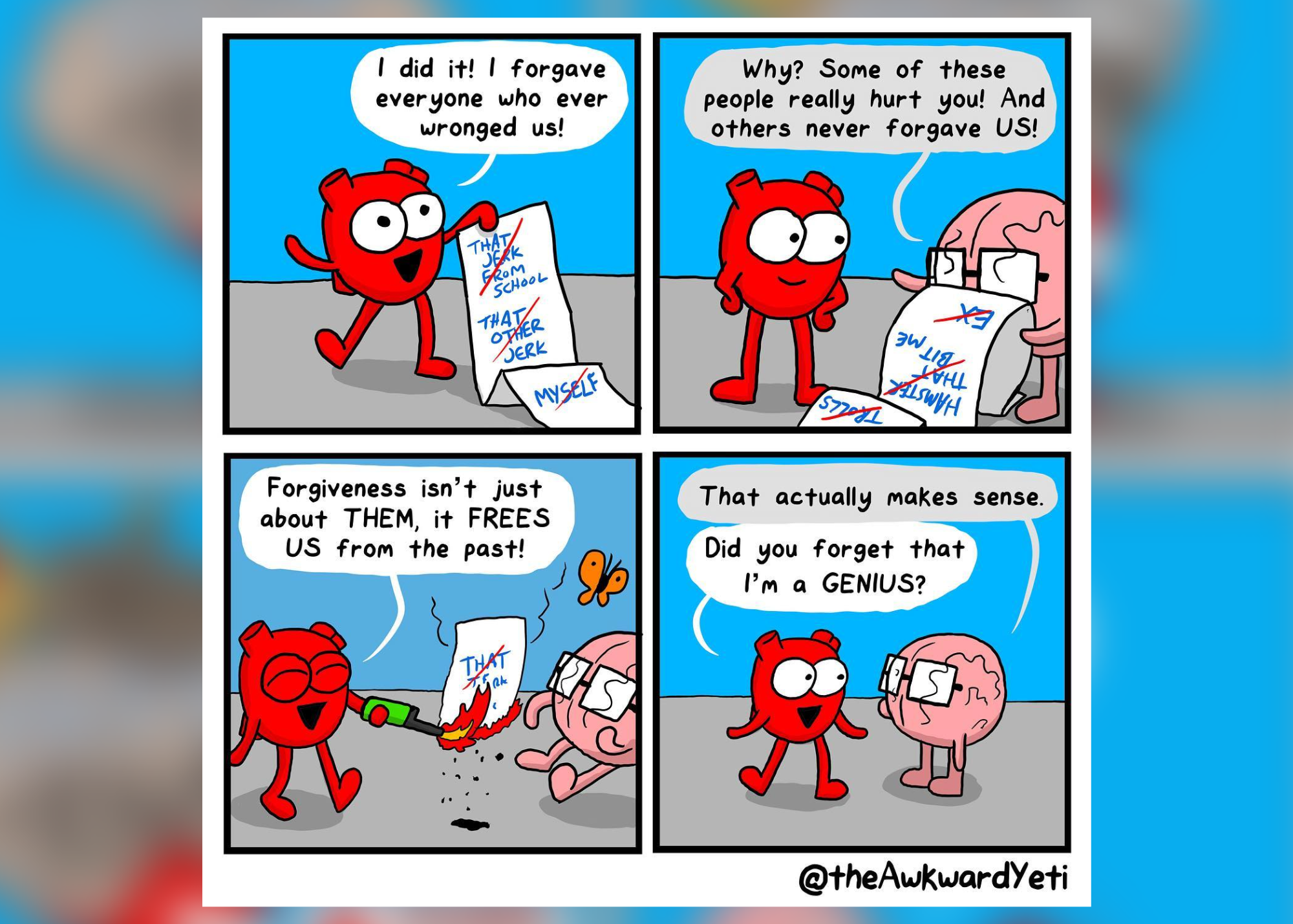 The heart is holding a long piece of paper with the things he forgives on it, which he later burns

This is the conversation of the two famous organs in the awkward yeti.

Heart: "I did it! I forgave everyone who ever wronged us!"

Brain: "Why? Some of these people really hurt you! And others never forgave us!"

Heart: "Forgiveness isn't just about them, it frees us from the past!"

Heart: Did you forget that I'm a genius?"

This conversation sparks an interesting comment among the Facebook users. One of the users who posted a comment was Pamela Dean-Dunlap, who commented: "Forgiving does not mandate future interactions. Heart is right! Free yourself, but the brain can step in to keep the distance for future self-preservation!"

Tina Brown shared her thoughts and said: "I think it was the dalai lama who said holding a grudge is like swallowing poison and expecting the other person to die. That thought has given me so much peace."

Laura Parsons said: "So spot on. It's sad that forgiveness is so widely misunderstood."

Another user commented: "You can’t tell yourself (or someone else) to forgive though. Even with a proper apology, the victim might not be feeling it yet or cannot accept it as receiving justice. Forgiveness must come on its own time, or not at all, and that is also fine."

A book that sold the best in New York! The struggle between the heart and the brain is something that everyone can relate to, from getting up for work and paying taxes to start a band and dancing with kittens. Heart and Brain is a book in the Awkward Yeti Collection that shows how the emotionally driven heart and its opposite, the brain, are connected.

Since its launch in 2012, its website has become a webcomic staple, with more than a million page views per month. The book costs 19.98 USD.

"Hilarious, adorable, and consistently funny, Awkward Yeti is one of my favorite comics on the web right now," said Matthew Inman, The Oatmeal.

"I have something to tell you as an award-winning, thirty-year veteran of cartooning who is very hard to impress; The Awkward Yeti is worth your time. If you don't agree, we probably wouldn't be friends," mentioned Dan Piraro, Bizarro Comics.

"The book is effing hilarious!" said Jon Cryer, Two and a Half Men, Pretty in Pink.

Ricky Gellissen posted: "One of my patients bought me this at the end of her course of treatment. She had seen a couple of the cartoons on my wall in clinic. this was way better than chocolates or alcohol as a thank you got. Had me in stitches...she knows me too well."

Laura Rowe said: "I LOVE this strip and book so much! Nick has defined the main conflict of our times, heart or brain, which do we follow. It is not often that I find my thoughts in popular culture books, strips or comedy. Heart and Brain are so refreshing. On topic, on target and like a page out of my life. Keep drawing Nick!"

Who Is The Man Behind Awkward Yeti Trauma?

Nick Seluk's "The Awkward Yeti" is a daily gag webcomic. The comic began in 2012 and follows the daily life of the blue yeti, Lars. Nick Seluk graduated from Northville High School and attended Central Michigan University, where he majored in psychology. Seluk worked as a senior graphic designer until 2014, when he left to pursue webcomics full-time. He and his three children live in Novi, Michigan.

What Is The First Book Authored By Nick Seluk?

His first children's book, "The Sun is Kind of a Big Deal," the first in a trilogy, was released by Scholastic in 2018. It is offered at scholastic fairs held at schools and in book stores.

Where Can I Get Nick Seluk's Books And Other Products?

Heart and Brain books can be found on most Amazon sites; BN.com; bookdepository.com (for those outside the United States), and in bookstores across the United States and Canada (check indiebound.com for local indie bookstores). My products are only available through theAwkwardStore.com.

Thank you for reading this article! On their website, you can read numerous "Heart and Brain Comics," "Lars Comics," and books. On the other hand, he is not attending events right now for some reason.