Baby Stoats Spotted Having A Good Time Jumping On A Trampoline 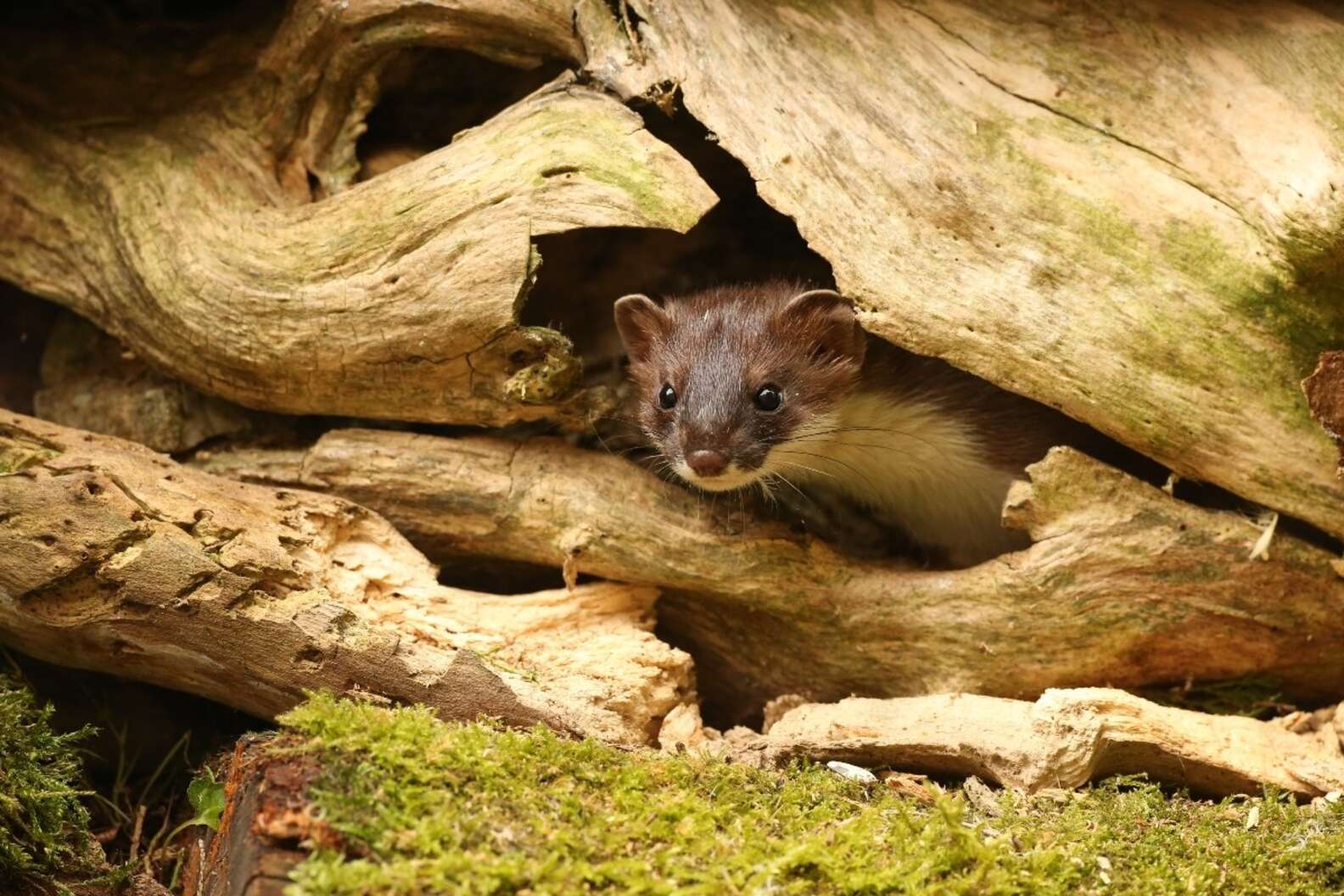 Baby Stoats - Who says that people are the only ones who can enjoy jumping on a trampoline? A wildlife artist based in Thixendale, North Yorkshire, named Robert Fuller spotted a family of stoats enjoying jumping on a blue trampoline.

Stoats, also known as short-tailed weasels, are native to Eurasia and northern North America, and they are classified as Least Concern on the IUCN Red List.

He says that when he put a trampoline in his yard, he never imagined that his wild neighbors would use it as a playground.

Fuller followed the activities of these elusive animals by installing a network of more than 80 remote cameras in his yard.

Eventually, he was able to capture a closer look at the stoats enjoying his trampoline from the footage collected by these cameras.

The video footage below shows stoats having fun on a trampoline when no one is looking.

The Stoat Goes Crazy On The Trampoline Footage

Fuller Shares His Experience In His Wild Stoats

Fuller has been curious about stoats' secret lives for a long time. He is always amazed by how playful they are every time he sees them.

This trampoline is next to the climbing frame he built for his kids to play on, but now, animals have taken it over. The young and very cute stoats often use it to jump on.

When I developed my camera set-up a few years later, the trampoline was a prime contender for a camera and I soon had exciting clips of stoats bouncing and having fun. The stoat kits seem to meet at the trampoline to play and have fun! They seem to like the texture of the material and use it for particularly bouncy playfights and stretching.

They also seem to like how the fabric feels, as they often rub their bellies on it.

He wants people to watch how this elusive tiny creature plays and enjoys things in an open space.

Here's a photo captured by Fuller's installed cameras in his yard. 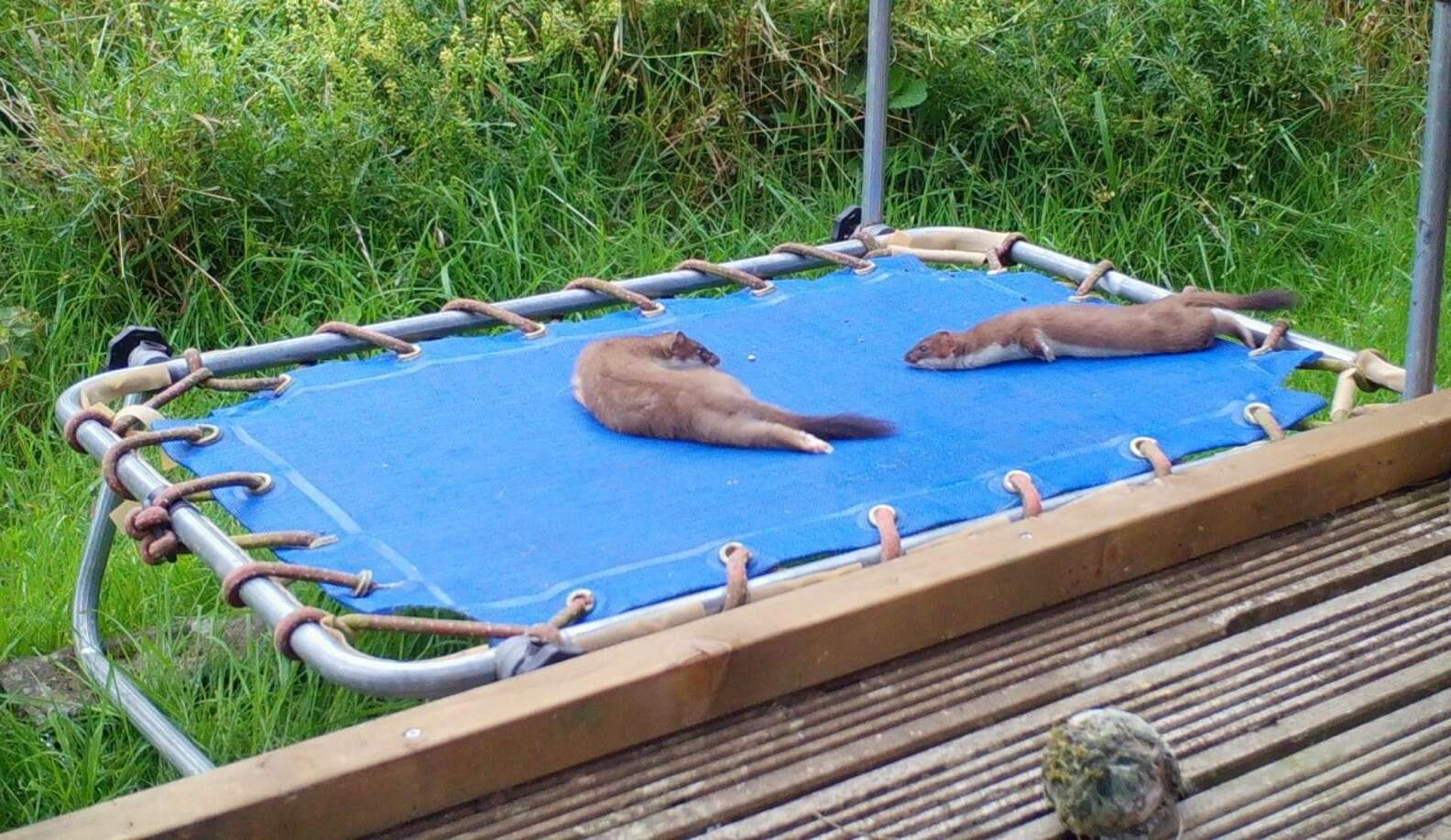 Two little stoats is rubbing their bellies in a blue trampoline

Watch as this stoat kit goes wild on my children's trampoline! This baby stoat is one of seven raised in my garden this year. Their mother Bandita is well known to me, and to many in the world after she was featured in a BBC Natural World documentary, Weasels: Feisty and Fearless.

The kits have found that the entire children's climbing frame is an ideal place for them to hone their hunting abilities and even engage in a stoat-themed version of the game hide-and-seek.

Fuller has no problem with the wild animals using his space, and he is very happy that he unintentionally designed the ideal habitat for his wild neighbors.

What do you think are the reactions of the viewers online who watch the video footage? Here are some of the gathered comments online.

Gary Cunningham says: "Stoat kits are simply hilarious. We had a family at the bottom of the garden. Watching them play from our kitchen window was absolutely side-splitting. Nature at its funniest."

While viewing the footage, Georgia Ann admits that she really loves wild animals like weasels, ferrets, otters, and many other animals like them.

She added: "Every part of their body plays. I've had a couple of ferrets and there is no way to not smile when they are playing."

Gary Glacken commented: "The knowledge that animals can have "fun" makes you look at them in a different light."

She wants to watch it again and again because it is still so funny. She is very thankful that Fuller shared his video about his baby stoats playing on a trampoline.

From what people said above, it's clear that they were very happy with what they saw on a trampoline.

Stoats aren't legal everywhere, but since they have a big following on social media and are often in cute videos, they've become more and more popular as pets for many. But before you decide to adopt a stoat, there are a few things you should know about them.

Stoats are very territorial by nature. They will think of where they live as their home and territory.

When threatened, like when a cat or dog comes into their territory, they will attack the animal.

They will fight fiercely to protect their territory, which can sometimes lead them to attack their owners.

They have killed animals that were twice as big as them. In the wild, they kill rabbits and eagles all the time. Please watch this video below as it shows how these little stoats can kill animals bigger than their body size.

They Have An Unpleasant Odor

Like skunks, stoats can spray a liquid with a bad smell when they feel threatened or when they are hunting.

This liquid will often be thrown at you. They could decide to spray everything that comes into your territory, which could be your whole house.

If you're not careful, a stoat can make your whole house smell like a skunk.

What Do Stoats Eat

Even though they can grow to be five times the size of a stoat, rabbits are a favorite target. They will also eat birds and their eggs, as well as rodents such as voles, mice, and rats. Stoats are active hunters who will chase mice and voles into their underground burrows or climb trees to rob bird nests.

Animals Jumping In A Trampoline

Can Stoats Hurt You?

Even though stoats aren't very big, they can do a lot of damage. When they feel in danger, they will bite. Of course, different animals act aggressively in different ways. But because this species hasn't been tamed, there will be attacks at some point.

What Is The Difference Between A Weasel And A Stoat?

The tail is the best and easiest way to tell the difference between a stoat (Mustela erminea) and a weasel (Mustela nivalis). The black tip of a stoat's tail is bushy and about half the length of its body. In contrast, a weasel's tail is short and thick, and it is only brown in color.

How Long Do Stoats Live For?

Most stoat babies are able to live on their own by the time they are 12 weeks old, and females are usually sexually mature by this time. Stoats in the wild live for about 4 to 5 years, but some have lived up to 10 years when they were kept as pets.

Are There Stoats In The UK?

Stoats are little mustelids that are related to weasels and otters. It features an orange body with a black tail and a unique bounding movement. It can be found in grassland, heaths, and forests all over the UK.

Can A Stoat Be A Pet?

Stoats are not suitable for keeping as pets, and in most parts of the United States, doing so is actually against the law. This is due to the fact that they are difficult to care for and are not bred in captivity; therefore, any stoats that you may see for sale were most likely captured in the wild.

How Do You Get Rid Of Stoats UK?

Stoats always choose to hide when they can. Set up a trap with a spring at the end of the pipe. Put this in a place where it can't be moved, and the stoat should set it off when he reaches the end of the tube. A standard metal cage rat trap is the second way to catch a Stoat.

Thank you for taking the time to read this story about baby stoats jumping on a trampoline. The author hopes that learning about these adorable animals brightens your day. If you want to adopt stoats, take the advice in this article into consideration.