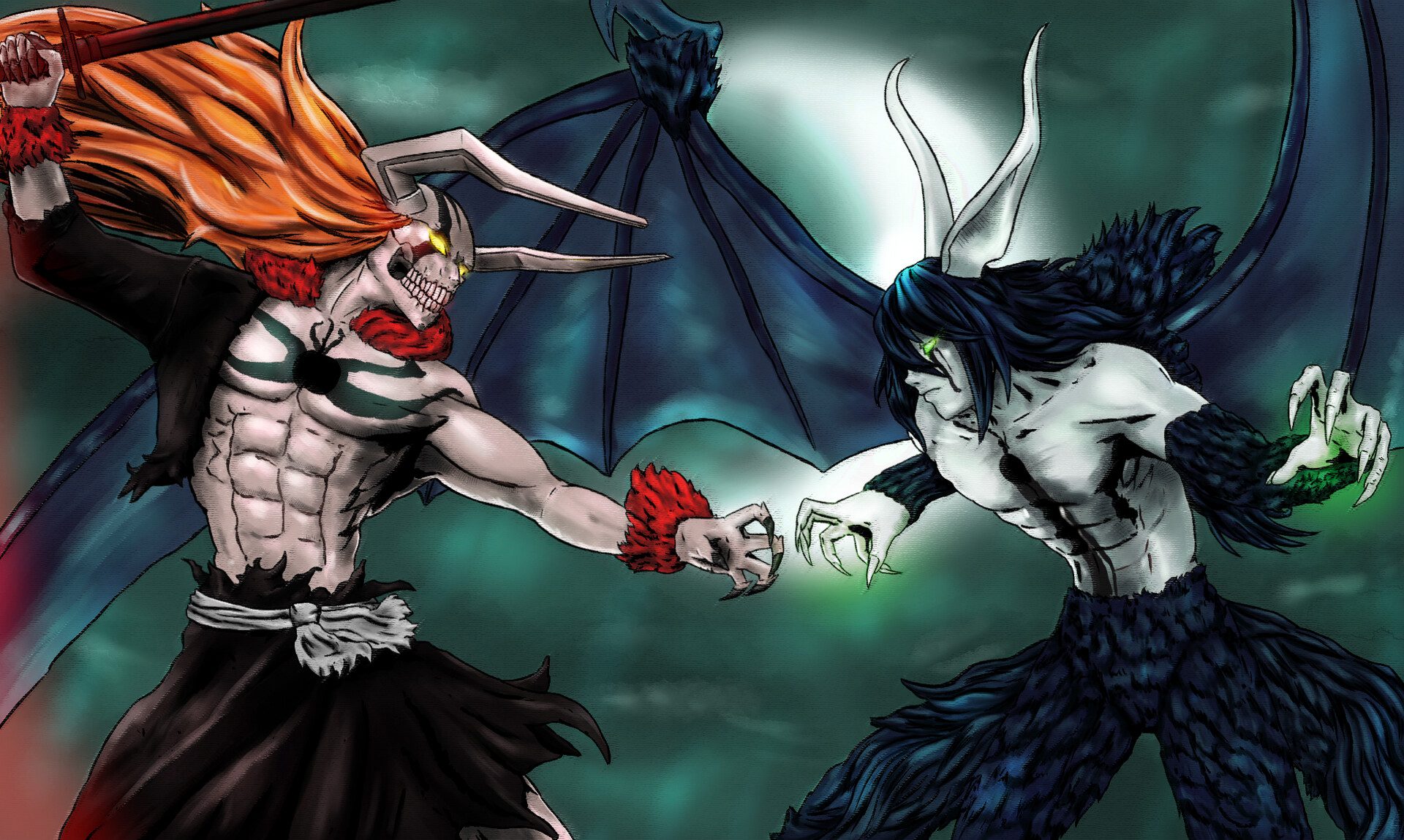 You love Bleach, and everyone loves it too. Its cool action scenes with magic, swords, and sports make it the best. So, here are the best fights in Bleach, compiled for you for a reliving experience.

Despite Bleach's conclusion in 2016, it is still one of the most well-liked Shonen Jump series.

The anime series Bleach had a lot of potential, but towards the conclusion of its run, it had been wasted.

It's too bad because the Shinigami's powers and the idea that they could exist in the real world were very interesting.

However, the main problems with the series were inconsistencies in the Shinigami's powers and bad writing.

The fact that Bleach used parts of its story cycles over and over again made the stories less interesting.

However, the quality of its battles was one area in which Bleach consistently outperformed.

Does Bleach Have Good Fights?

The series was praised for having some of the best fight scenes in manga and anime, even though fans may have had mixed feelings about the manga, especially certain parts in the book's last arcs.

There are several well-known fights in the series, and some of them were pretty violent, whether they were about the fate of the planet, a clash of ideas or just two rivals fighting.

Here are a few of the best fights in Bleach, which are enjoyable to watch because of the incredible cinematography and mind-blowing abilities that were on full display.

Here are the greatest battles to ever take place in Bleach, taking this into consideration.

Starrk Vs Shunsui - Biggest And Longest fight in Bleach

They may be slackers, but they are also among the best combatants in their respective forces.

The fight starts out slowly, but when Coyote Starrk uses his Resureccion, it speeds up. This makes Shunsui Kyoraku take off his pink kimono and call his Shikai.

An unusual combat between two veteran warriors ensues. Starrk quickly gets used to how Shunsui can make children's games come true in the middle of a fight.

He even uses its power against him by calling wolves made of pure energy to run around in his shadows.

In the end, Shunsui triumphs, bringing an end to one of the best fights of the White Invasion. 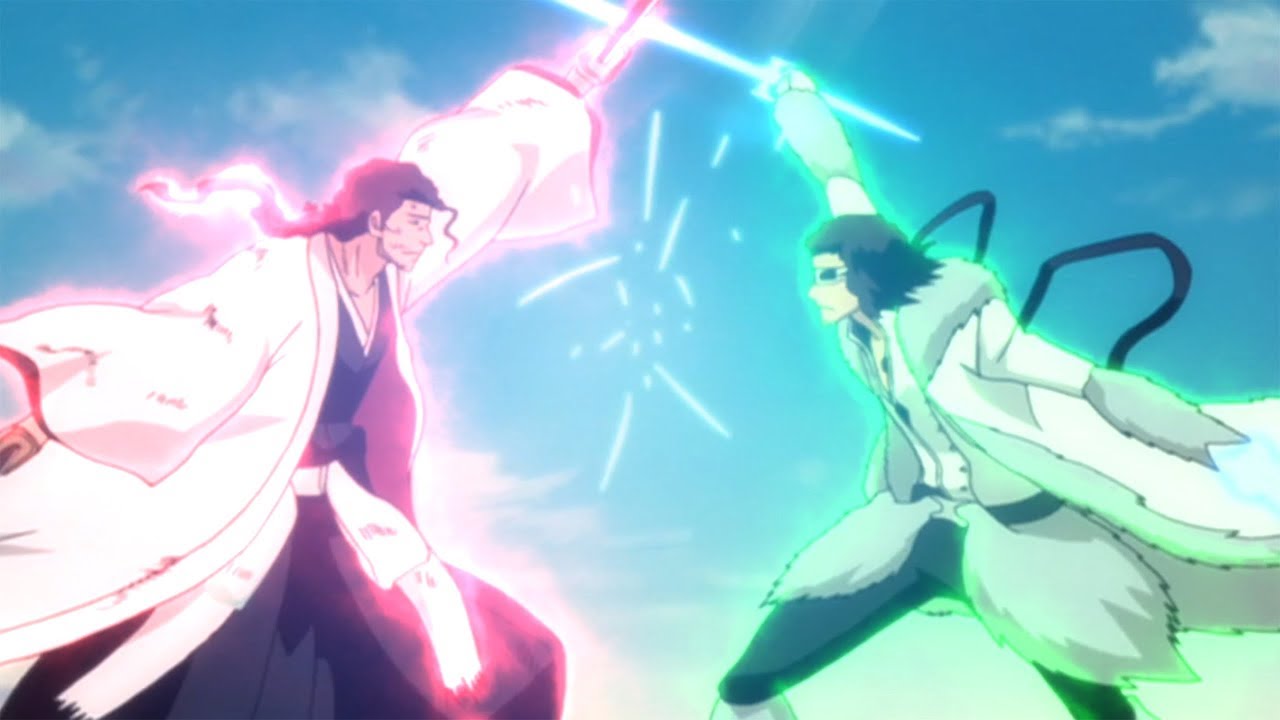 A fight between Starrk and Shunsui in Bleach series

Masaki Kurosaki, Ichigo's mother, was killed by The Grand Fisher over ten years before Bleach.

When Ichigo was a child, the Grand Fisher used this lure to catch him, forcing his mother to make the ultimate sacrifice to save him.

In a fit of anger, Ichigo fought the Grand Fisher and tried to cut him, but he got stuck on a spike and almost died.

Grand Fisher and Ichigo were both too hurt to continue fighting, and the combat ended in a tie as a result.

Ichigo needed to be healed, and Rukia had to warn him that any injuries to his soul would also affect his physical health.

The father also assured Ichigo that he didn't kill his mother and advised him to have a good life in remembrance of her sacrifice.

The Grand Fisher, who had turned into an Arrancar, swore to get back at Ichigo.

Due to Grand Fisher's death at the hands of Ichigo's father, Isshin, during Bleach's Arrancar arc, this retaliation was never carried out.

This emotional component of the fight, together with the way it prepares Ichigo to carry on Rukia's work, makes it stand out. 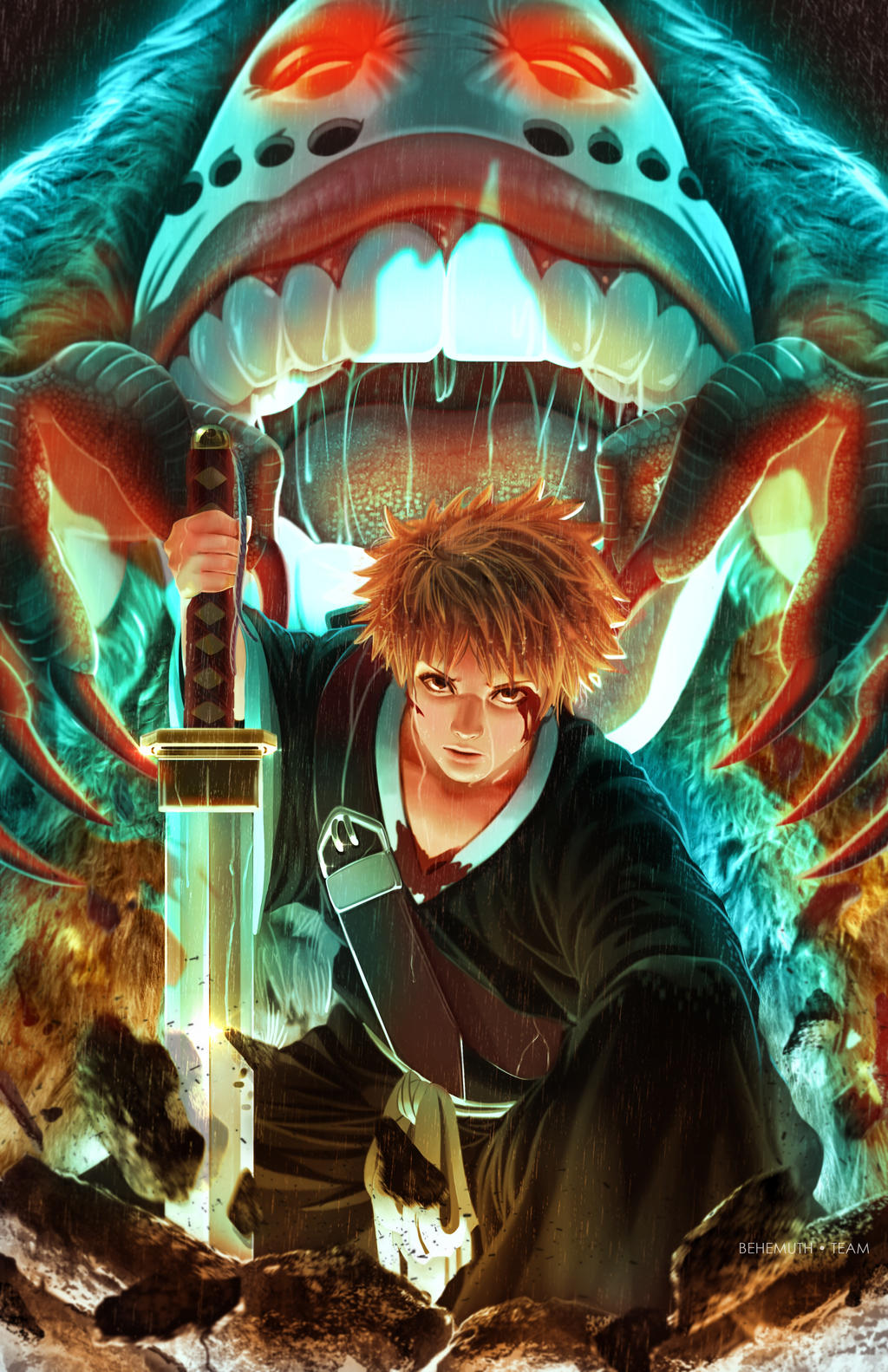 Wallpaper of Ichigo and Grand Fisher during a fight

Captain Gin Ichigmaru of Squad 3 draws attention wherever he goes because he calls himself a "silver-tongued serpent."

He dueled with Aizen during the Arrancar arc of Bleach. During the Fake Karakura Town chapter of Bleach, he was ready to fight Ichigo, even though his main goal was to kill Aizen.

Previously, the two had fought each other in the Bleach Soul Society arc. Simply, Ichigo's circumstances did not work out properly.

This one was also not quite there, but by that point, Ichigo had advanced and was able to keep Gin at bay for a little while longer.

Gin proved throughout this fight that he was more than simply the smooth-talking persona that had been previously built for him.

Ichigo also learned enough from the experience to be able to tell when he is trying to do more than he can.

As the last part of a 100-year plan, Gin would try to turn on Aizen and fight him, which led to Gin's death.

This was the one brawl in the bleachers that caused spectators to leap from their seats. Few people can claim to have survived a simultaneous confrontation with two captains.

Who could have predicted the outcome of this conflict?

Even though Tosen and Komamura were two overmatched captains, Kenpachi fought beside them all the way to the conclusion.

Both captains and their Bankai were brought to their knees by Kenpachi's incredible strength.

You all definitely felt the chills when Kenpachi shouted, "Go reincarnate yourself so I can kill you all over again." 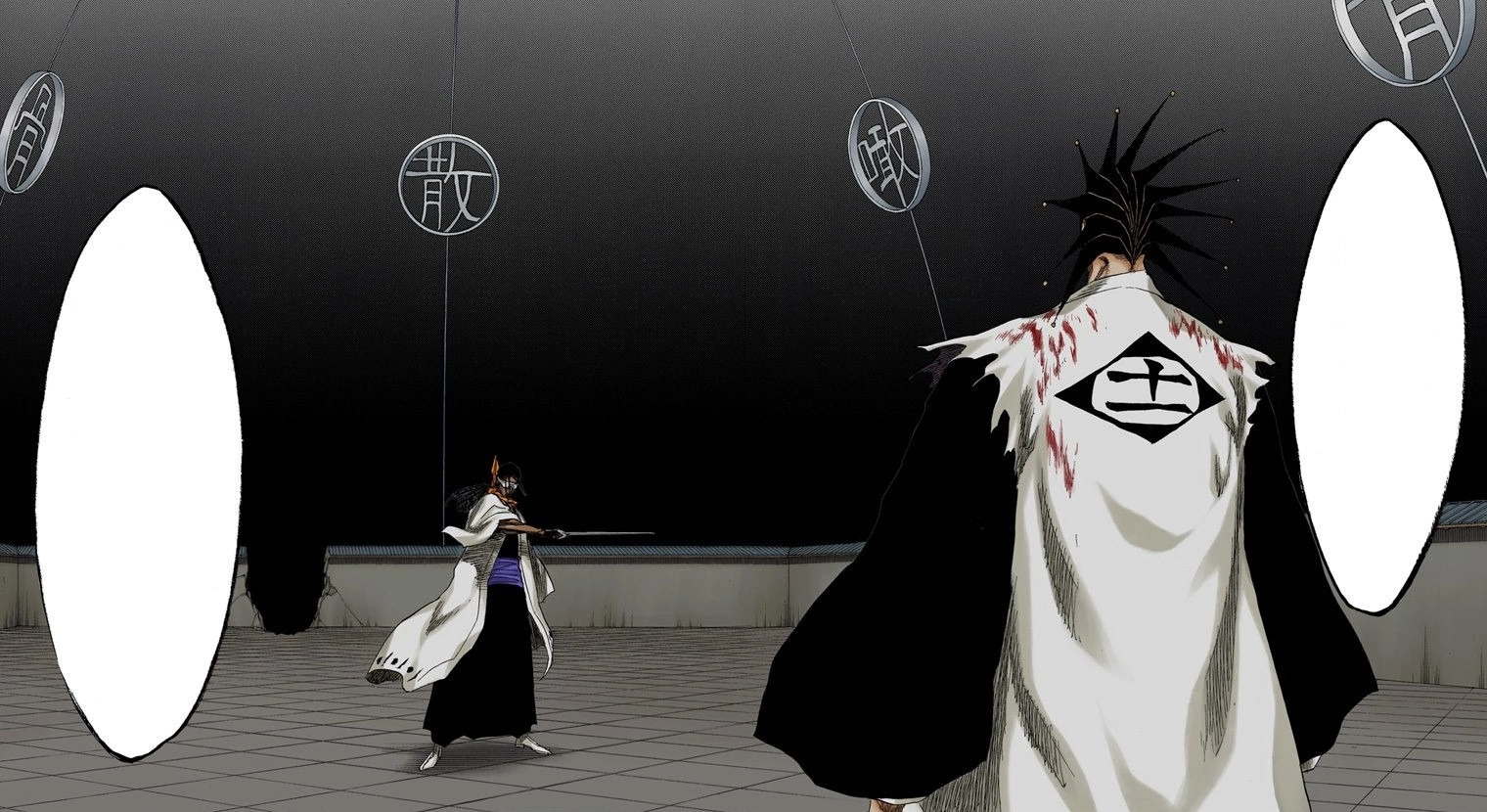 The 2nd division's old captain squares off against the current captain during the Soul Society arc.

At first, Soi Fon's animosity toward Yoruichi was unadulterated. Soi Fon has justification for doing so. This bleach war is rife with feelings.

Yoruichi used to be a hero of Soi Fon. But Yoruichi had to leave the spirit society because of a number of things, and Soi Fon felt like she had been left behind.

Soi Fon's anger came from what she thought was betrayal in the past, which they are going through again.

However, the teacher always has the upper hand over the pupil. In the end, Soi Fon conceded defeat after facing both of their emotions.

After learning about these great fights in Bleach, you want to watch the show again and enjoy its spellbinding fights all over again.

The last arc of Bleach will include the Thousand-Year Blood Arc. The relevant arc's manga runs from Volume 55 to Volume 74.

Restoring the Quincy army will be the focus of the arc's narrative. Ywahch wants to wreak havoc on Hueco Mundo, Soul Society, and humanity.

His main goal is to take the Soul King inside himself. As the final Quincy, Ishida has defected to the Quincy army.

His relationship with Ichigo and his teammates is damaged as a result of this. As the fight with Ywahch gets worse, more details about Ichigo and Ishida's families come to light.

There is a time gap of ten years after the war's conclusion. In October 2022, the anime Bleach: Thousand-Year Blood War will debut on TV Tokyo.

The remainder of the original manga up until its conclusion will be covered by the anime. The news was revealed on July 2nd during Anime Expo.

To commemorate the occasion, an aggressive new trailer and key image were released.

At Jump Festa 2022, the major revelation of the Bleach Final Arc was set. The fans were not let down.

With the release of the final story arc from The War of the Thousand Years, a trailer and promotional video (PV) for the return of the Bleach anime were released.

The original Tite Kubo animation and writing that will air in October 2022 have served as the inspiration for the anime.

Here is the trailer.

Based on Kubo-sensei's recent important comments, the fan account @bleachscans put out some interesting information a few days ago.

What Episodes Are The Best Bleach Fights?

What Was Ichigos Hardest Fight?

The hardest fight of Ichigo was with Byakuya Kuchiki. Byakuya had to defend Rukia's impending execution in order to protect Soul Society law and his own honor. This was the story's most difficult test of wills.

Who Is The Strongest In Bleach?

The most potent character in Bleach is Yhwach, Son of the Soul King. Quincy's ancestor is him. He was imprisoned in a crystal cell in the Soul King Palace for countless years, half-dead. Along with his unquestionable power, Yhwach possessed unrivaled intelligence.

After having a look back and counting down the best fights in Bleach of all time, You might want to watch this again. For a very long period, this venerable animation was suspended.

However, fans will be happy to know that soon, Bleach's final season (season 17) will win your hearts all over again. The release date is October 2022.

Once more, the cries of "Bankai" from the soul reapers will tremble your very souls. Your world will be rocked once more by the amazing fight-related background music.