Posters for Black Mirror season 6 are appearing as they advertise that the series is ‘live now, everywhere‘.

This is confusing news as Charlie Brooker recently confirmed that he has no intention of releasing a new season anytime soon, especially since he’s the creator of the show at Netflix and previously Channel 4.

Despite this, posters have been popping up in the Spanish capital of Madrid on bus stops and the like, saying that Black Mirror season 6 is here ‘live‘.

Charlie Brooker recently spoke about how he didn’t feel like a new season of the dystopian was appropriate during these testing times, saying:

“I’ve been busy, doing things. I don’t know what I can say about what I’m doing and not doing.

“At the moment, I don’t know what stomach there would be for stories about societies falling apart, so I’m not working away on one of those.

“I’m sort of keen to revisit my comic skill set, so I’ve been writing scripts aimed at making myself laugh“.

I think we can all agree with that sentiment right now. Things are very bleak at the moment and the last thing we need is a show reminding us that things could actually be bleaker if, I don’t know, there was a badger with the consciousness of a serial killer in your smart toaster. 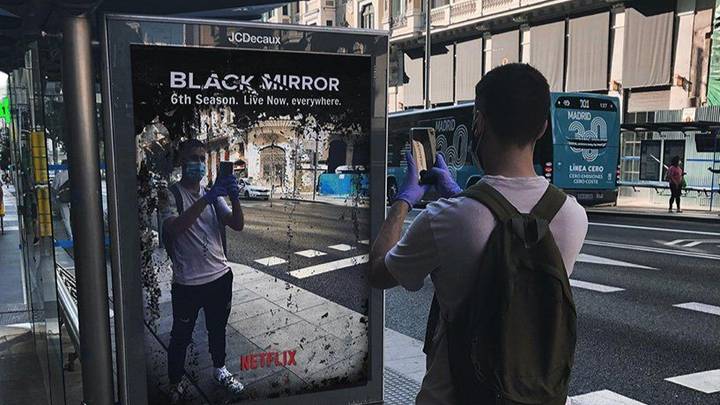 Then why are there posters popping up?

Created by a Madrid-based agency called Brother ad school, the posters are essentially mirrors themselves that say “live now, everywhere“. Get it? GET IT?!

It’s because now is a pretty crazy time and it’s a bit like something you might see in the Netflix show Black Mirror. Netflix actually went on to confirm that the advertising campaign had nothing to do with Black Mirror or the streaming service.

I’m not sure how that works legally, and I would have thought that the posters will have to be taken down at some point very soon.