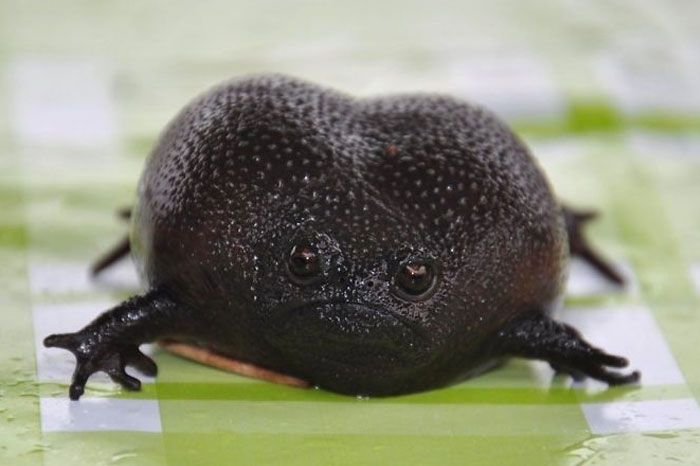 Black Rain Frogs have a squeaky toy-like sound and look like furious avocados, according to some. 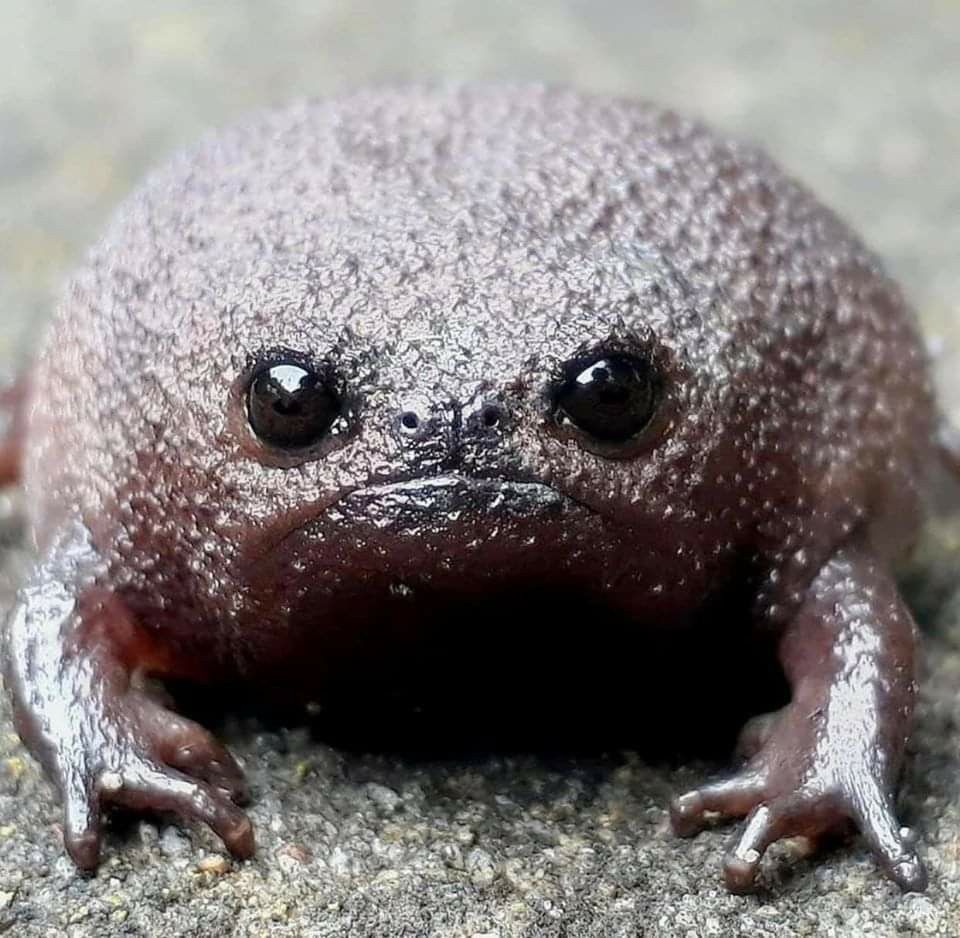 A close up shot of a black rain frog

This species is found only in the Western and Eastern Cape provinces of South Africa. It stretches from the Langeberg Mountains near Swellendam (3320CD) in the west to the Dieprivier Forest near Kareedouw Pass (3324DC) in the east. The aural record from Zuurberg (3325BC; H.H. Braack pers. comm.) needs confirmation. In Grootvadersbosch Nature Reserve (3320DD) and surrounding grid cells, B. fuscus is sympatric with B. acutirostris and B. montanus. This species' distribution is mostly continuous, except for a hiatus between the Langeberg and Outeniqua mountains. No confirmation of B. fuscus in Joubertina, Niekerksberg, or Prince Alfred Pass (Burger 1992). The calls heard at Joubertina were later attributed to B. adspersus pentheri (pers. obs.)

Mountain B. fuscus occurs at heights far above 1000 m, while near the shore it exists at sea level. Along the southern coastal belt's Afromontane Forest and Mountain Fynbos (Burger 1992; D. McDonald pers. comm.). The Grootvadersbosch area receives between winter and year-round rainfall, averaging 1050 mm. May–July and December–January are relatively dry. Grootvadersbosch's forests grow on clay soils from Bokkeveld shales, while fynbos grows on sandy soils from Table Mountain Sandstone.

In suitable environments, B. fuscus is common. These frogs live in vertical tunnels under logs in the forest (pers. obs.). They inflate their bodies to the point where they are difficult to remove from the tunnels, perhaps to avoid predators. The vertical tunnels are linked to a network of shallow horizontal tunnels that feed them (L.R. Minter pers. obs.).

Bush Pig Predation Potamochoerus larvatus was detected in 18 B. fuscus specimens in one pig's stomach (Palmer 1982).

Although B. fuscus has a limited distribution, it does not appear to be a conservation issue. The over-exploitation of native forests and the establishment of exotic timber plantations has harmed certain populations, but the species is still widespread. These include Tsitsikamma National Park, Outeniqua Conservation Area, Grootvadersbosch Nature Reserve, and Marloth Nature Reserve. 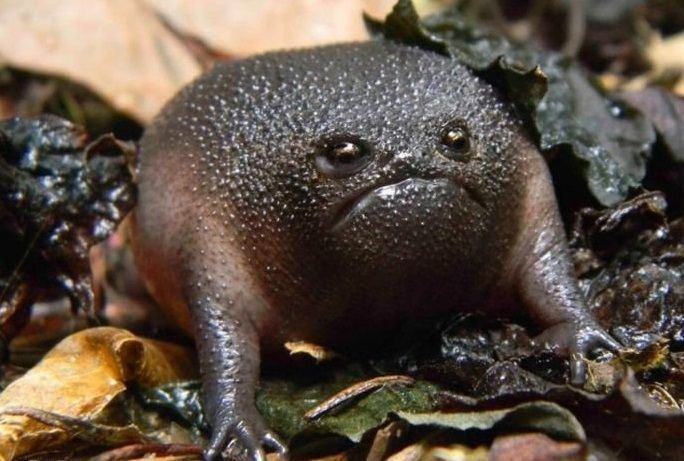 What does a black rain frog's appearance resemble?

The dark brown or practically black spherical body of the black rain frogs is typical of the species. Their ventrum is lighter in colour and does not have any coloured patterns. They have toes and limbs that are too short. Instead of warts, their skin contains little tubercles and pitting, or noticeable widely spaced granules that are pronounced on the surface.

The second toe of these species is significantly longer than the first and fifth toes of the same species. Black rain frogs have the ability to fold their legs whenever they wish.

How adorable are they?

Because of their gloomy expressions, these are not considered cute animals. These frogs from South Africa are also regarded as the world's grumpiest frogs because of their abrasive demeanour.

"despite the title giving me fair warning, I wasn't ready for how a n g e r y they look"

"This is the CUTEST thing I have ever seen in my life!!"

What methods do they use to communicate?

These animals communicate with one another using noises, calls, and chemical signals. They make a short call that sounds like a 'chirp' at a frequency of 1.8 kHz, which they term "chirp."

What is the size of a black rain frog?

They measure 1.6-2 in length from their snout to their vent (40-51 cm). The females of the species are significantly larger than the males. These frogs are normally small, but the huge rain frog can grow to be more than 3 inches in length (7.6 cm).

How far can a black rain frog jump in a single bound?

It is unknown what the jumping speed of these black rain frogs is.

What is the approximate weight of a black rain frog?

It is not known how much weight the black rain frog possesses. Desert rain frogs, on the other hand, can weigh up to 0.25 lb and are related to them (0.11 kg).

What are the names of the species' male and female members?

The male and female black rain frogs are not known by any specific name since they are cryptic.

What do you think a baby black rain frog should be called?

Baby black rain frogs are not given a distinct name because they are so young. Froglets are the name given to these little frogs.

What do black rain frogs eat?

No, this particular species of rain frogs are not toxic in any way.

Do you think they'd make a good pet?

These frogs would make excellent pets, no doubt. This frog, however, requires proper care and a suitable environment in order to grow as a black rain frog pet. It will take some time for them to become acquainted with their owners. It is important that you conduct your own study as a prospective pet owner before making your final decision on which animal to adopt.

Being a pet owner can be extremely rewarding, but it also necessitates a significant investment of time, effort, and money. Inspect your state and/or country's legislation to ensure that the pet you choose is legal in your area. It is forbidden to take animals from their natural habitats or disrupt their natural environment.

Please ensure that the pet you are considering purchasing is not an endangered species or one that is listed on the Convention on International Trade in Endangered Species (CITES) list, and that it has not been removed from the wild for the pet trade.

Did you know that Cape Rain Frog is the ancestor of Black Rain Frog?

The Cape rain frog, scientifically known as Breviceps gibbosus, is the ancestor of these black rain frogs and was the first rain frog species in Africa to be identified by Carl Linneaus, who was also the first European to do so.

The International Union for Conservation of Nature (IUCN) has designated these cape rain frogs as Near Threatened due to the decline of fynbos biomes. These rain frogs are solid in colour, although other rain frogs, such as the Mozambique rain frog, can be distinguished by their distinctive patterns. Many of these rain frogs exhibit arboreal traits at various times throughout the year.

Females are known to deposit empty eggs on top of actual eggs as a deception to protect the real eggs from predators while the real eggs are being laid. Desert rain frogs, which are distant relatives of black rain frogs, are categorised as an Endangered species on the IUCN Red List. As a result, it is not legal to possess these animals.

What is the origin of black rain frogs?

The black rain frog is a species of frog that is indigenous to and endemic to the woods of South Africa.

Black Rain frogs are preyed upon by a variety of predators in their native habitat, including snakes, red river hogs, and birds of prey. In order to avoid their predators, they inflate their bodies, making them appear rounder.

I think you like 'bizarre creatures', there are a lot on this website like deep-sea sharks. Once you learn about them, your mind will be blown.