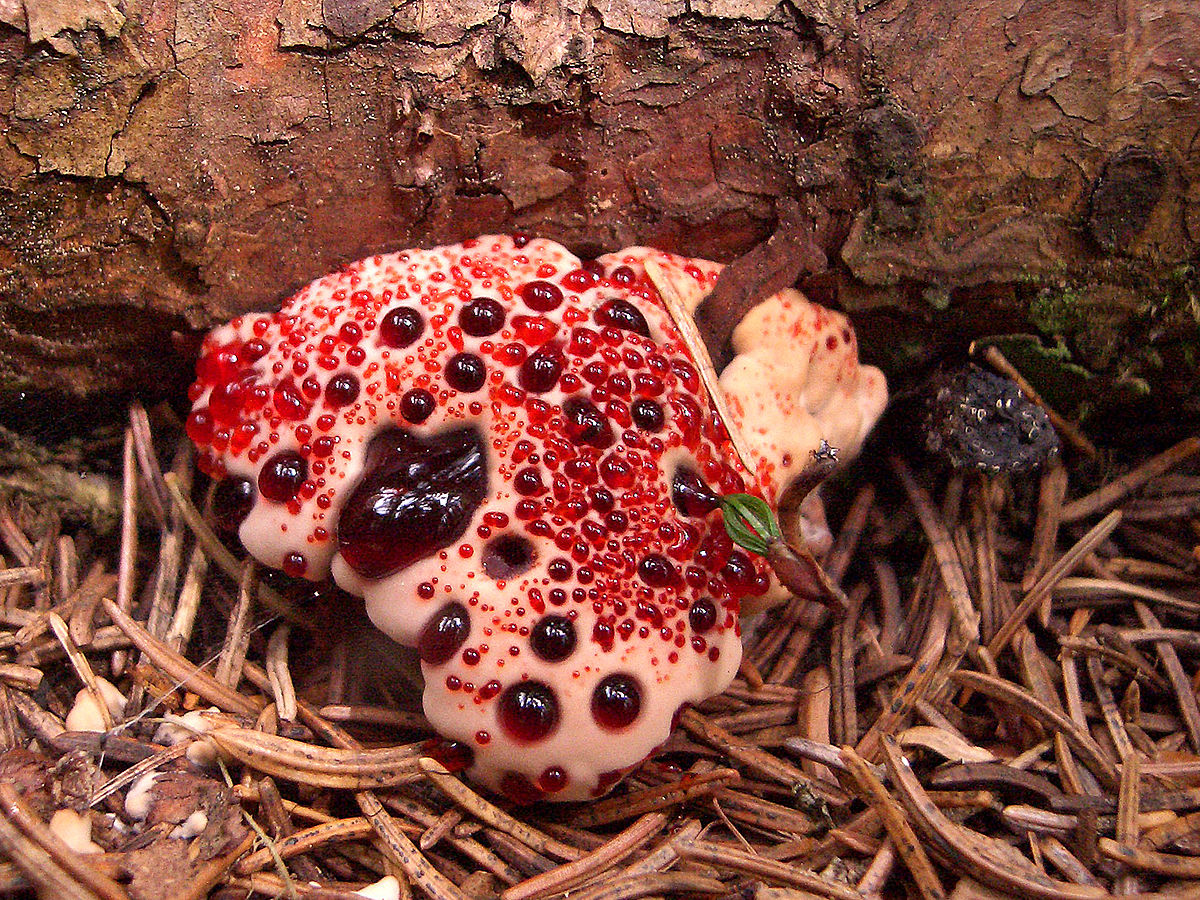 Hydnellum Peckii is a peculiar mushroom that secretes a blood-red fluid that has anticoagulant qualities. It is known as the Bleeding Tooth Fungus. 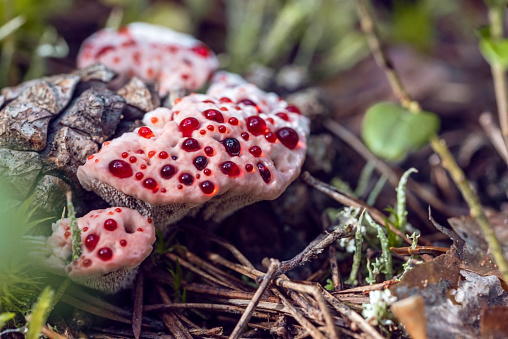 Hydnellum peckii is a fungus that belongs to the genus Hydnellum and is a member of the Bankeraceae family.

In addition to being a mycorrhizal species, Hydnellum peckii forms mutually beneficial associations with a range of coniferous trees, which can be found growing on the ground either single, dispersed, or in large groups.

The fruit bodies are commonly funnel-shaped with a white edge, though the shape can be highly diverse depending on the cultivar. Young, moist fruit bodies can "bleed" brilliant red guttation droplets that contain a pigment known to have anticoagulant qualities comparable to heparin. These bright red guttation droplets can be seen on the surface of the fruit body. The distinctive appearance of the young fruit bodies has earned the species various descriptive common names, including strawberries and cream, bleeding Hydnellum, bleeding tooth fungus, red-juice tooth, and the Devil's tooth, all of which refer to the young fruit bodies' unusual appearance. Although the fruit bodies of Hydnellum peckii are easily distinguishable when they are young, they become brown and unremarkable as they mature. 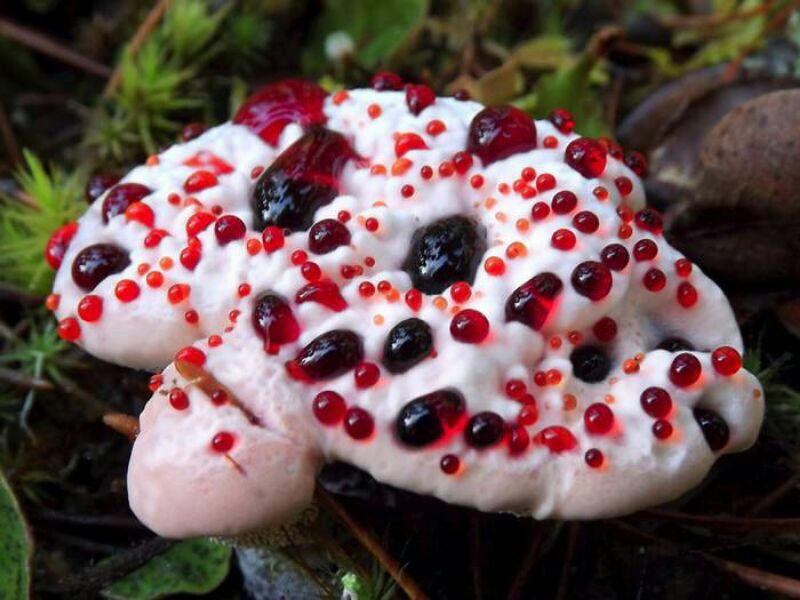 A young Bleeding Tooth Fungus (Hydnellum peckii) and its mature counterpart (Hydnellum peckii) may be difficult to distinguish from one another, in the same way, that you may have to be convinced that a raisin was once a grape before it dried out and shriveled up.

The adult mushroom is brownish in color and has a drab, uninteresting appearance. When this pale fungus is young and rapidly growing, however, it looks to bleed from its pores, which has led to some of its colorful titles (it is also known as Devil's Tooth, for example).

It turns out that this gooey crimson liquid is actually a sap produced by a process known as guttation. When the soil surrounding the fungus' root system gets extremely moist, the process of osmosis may be activated, forcing water into the fungus' roots. This causes pressure to build up within the organism, which finally builds up to the point where the liquid is forced to the surface of the fungus. However, despite the fact that scientists have not yet determined what this liquid is, they do know that it appears red due to a pigment contained within the fungus.

Bleeding Tooth Fungus also contains microscopic toothlike projections underneath its mushroom cap, which are where its spores are created, in addition to its most visually arresting feature. A velvety feel can be achieved by covering the mushroom's surface with soft "hairs," which appear when the mushroom is young and disappear as the mushroom matures. As with related fungi, behind each mushroom lies a mass of mycelia that connects to form a root system, similar to that of a fungus. The mycelia can extend far and wide just beneath the surface of the forest floor, up to 11 feet distant from the location where the mushroom first appears on the forest floor.

Symbiotic Relationship With The Coniferous Trees

Bleeding Tooth Fungus is found in wooded, often hilly areas of North America, Europe, Iran, and South Korea. It has a symbiotic relationship with the coniferous trees whose roots it lives amongst and is a source of food for the conifers. During the growth of the fungus, the trees supply it with access to a stable source of carbon dioxide, while the fungus generates enzymes that convert amino acids and minerals contained in the soil into forms that are more readily utilized by the host plants. Because its presence indicates the presence of an old, species-rich forest, scientists are concerned when it disappears from a region, as appears to be happening in parts of Europe where nitrogen deposits produced by pollution may be an issue.

The most common question that comes to everyone's mind is "Is bleeding tooth fungus poisonous?" The answer is No, the Bleeding Tooth Fungus is not harmful, but it has a bitter taste that makes it inedible, despite the fact that it is known by several other names (Strawberries and Cream, because of its resemblance to a fruit danish).

A different type of natural dyer appreciates the mushroom. They dry it and use it to create a beige dye, or they combine it with mordants (substances such as alum or iron that cause a dye to set into fabric and other surfaces) to create blue-green hues on fabrics and other surfaces.

Using extracts from the Bleeding Tooth Fungus, scientists discovered that atromentin was present. Atromentin, like heparin, can be used as an anticoagulant to prevent blood clots from forming. It also has anti-bacterial properties, which suggests that it may be a viable treatment option for the most common strain of bacterial pneumonia.

Researchers are also investigating thelephoric acid, a molecule discovered in the Bleeding Tooth Fungus that has the potential to be employed in the treatment of Alzheimer's disease in the future.

People really like this unique fungus and can't stop themselves from discussing this fascinating creature.

"Okay, but why can't it be called, like, the jelly sprinkles cupcake fungus, or something?"

"I’m so disappointed! This post, the pretty pics, made me want to google it. It’s inedible, something that pretty should be edible. I hope I get to see one in the wild someday."

"This pic is either horrifying or satisfying. I can't decide."

Don't let the creepy nature of the young fungus deter you from trying it out. Bleeding tooth fungus may hold the key to solving some of our most perplexing medical mysteries.

Those of us who have an insatiable curiosity for the strange and unusual will adore bleeding tooth fungus (Hydnellum peckii). It has a bizarre appearance that looks like something out of a horror film, but it also has some possible medical applications. Native to the Pacific Northwest, this mushroom is known for its spectacular appearance.