You Need To Visit This Bloody Red Beach In Hormuz Island, Iran 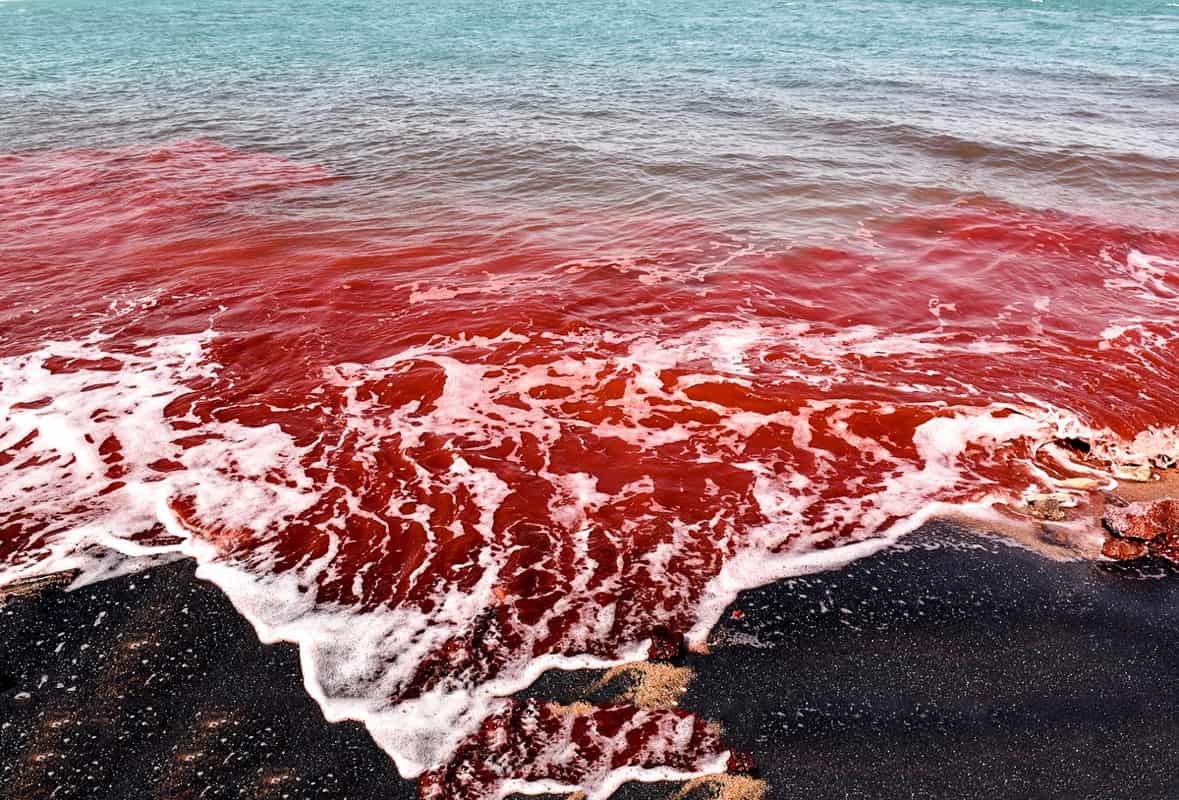 The Hormuz Island Iran (/hrmuz/; Persian: Jazireh-ye Hormoz), often spelled Hormoz, is an island in the Persian Gulf. It has a beautiful and a favorite tourist spot called 'Bloody Red Beach Iran'. It is the largest of the Iranian islands. The island of Hormozgan is located in the Strait of Hormuz, approximately 8 kilometers (5 miles) off the Iranian coast. It is a part of the Iranian province of Hormozgan. However, some development has taken place since the late twentieth century, and the area is becoming more populated.

The island was named "Hormuz" after the significant harbor town of Hormuz (Ormus) on the mainland 60 km away, which was a center of a minor principality on both sides of the strait. The principality paid tribute to the Ilkhanate and benefited from marine trade. Around 1300, the town's lord moved to the island to avoid raids from Mongolian and Turkish factions from the interior. The king later pacified the Ilkhans. 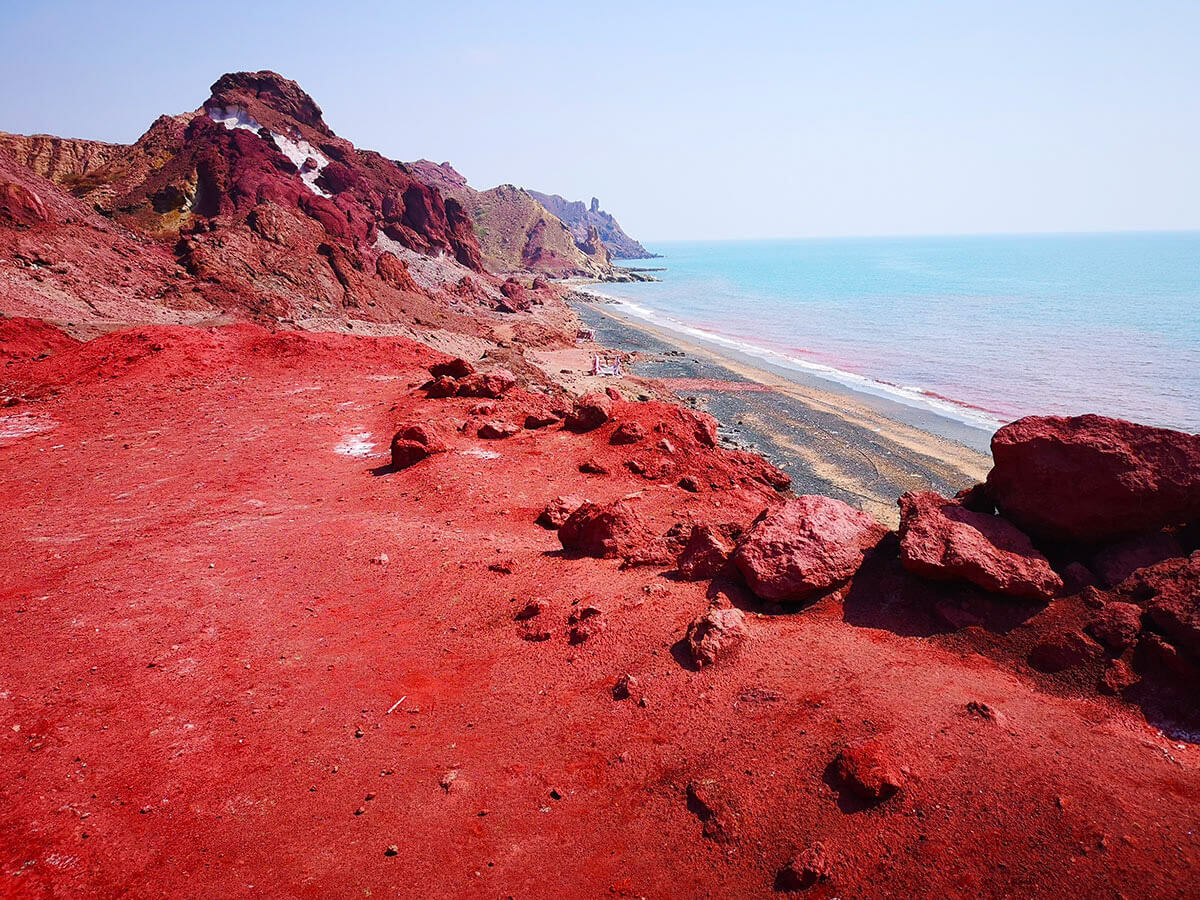 The northern tip of Jarun island was renamed New Hormuz to distinguish it from the mainland's old settlement, which eventually fell into ruins. The name of the new town was gradually adopted for the island.

The island is dry, and summer temperatures can exceed 43°C (109°F). As a result, all supplies, including water, had to be transported from the mainland. The island's location, however, made it a safe trading harbor for decades. Hormuz remained a reliable and generally safe harborage while its competitors suffered intermittent destruction.

Marco Polo reached Hormuz about 1290 while traveling on land, according to his travelogue.

In 1505, King Manuel I of Portugal initiated an expansionist agenda in Africa and Western Asia. In 1507, the Portuguese duke Afonso de Albuquerque seized the island and brought it into the larger Portuguese Empire. To discourage future invasions, the Portuguese built the Fort of Our Lady of the Conception. It became a port of call for Portuguese ships bound towards Goa, Gujarat, and Kishm. In 1552, the Ottomans besieged the island under the command of Piri Reis. An Anglo-Persian force led by the English East India Company seized the island from the Portuguese in 1622.

Shah Abbas distrusted the locals and did not want the island to remain a commerce or military base; he instead established the nearby mainland port of Bander Abbas. Hormuz's slide Many of its residents moved to their fields and orchards near the old Hormuz on the mainland for the season, just fishermen remaining. The island continued to export minor quantities of rock salt and iron oxide lumps for ship ballast.

After a century of Omani rule, it remained a thinly populated fishermen's island until the late twentieth century.

Hormuz Island - Your Next Trip Destination 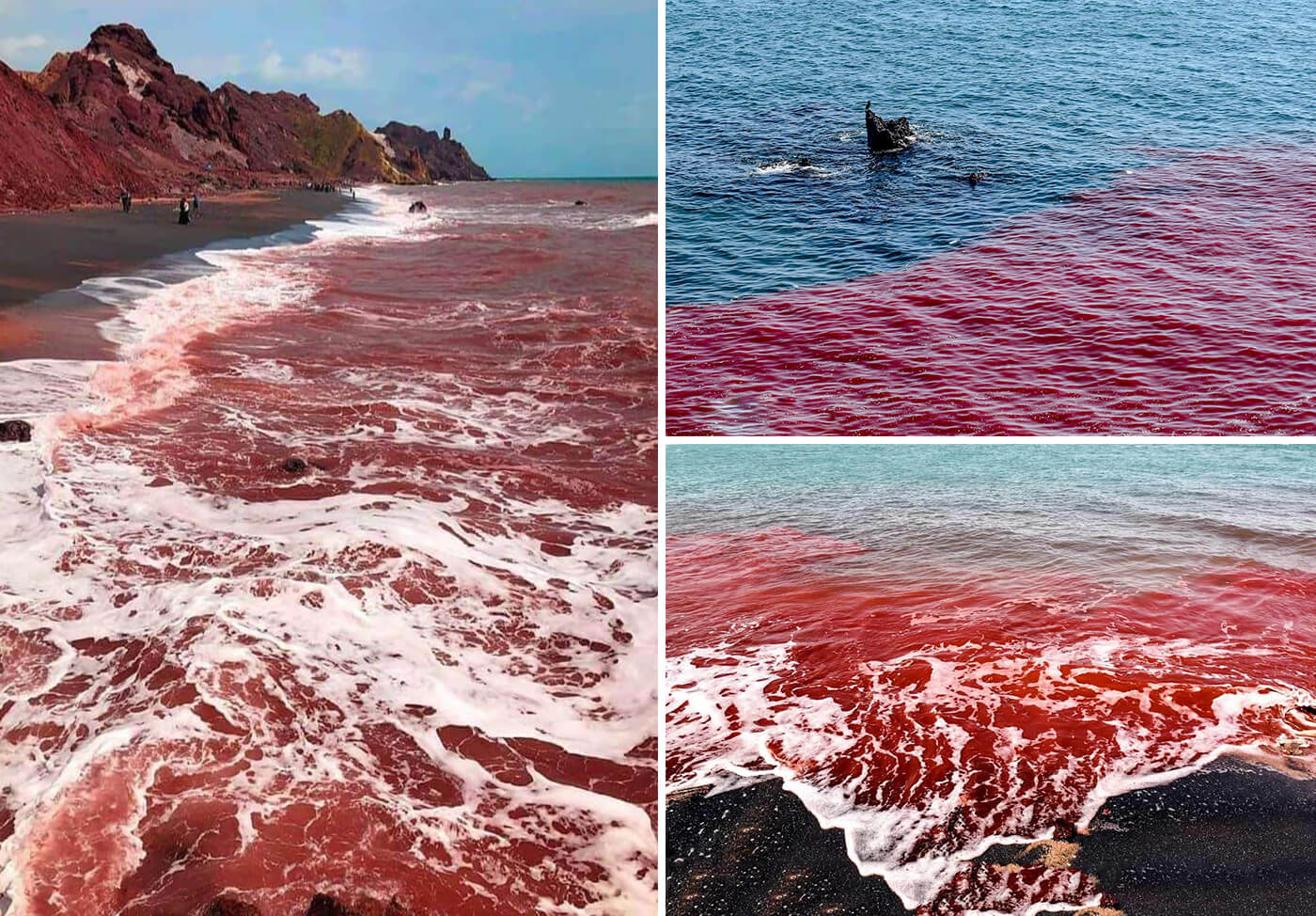 Hormuz Island with red sea water near the shore

Why The Beaches In Iran Are Red?

Why is the water on Iran's Rainbow Island red, this is a topic that frequently arises. The answer is simple. The existence of a high concentration of iron oxides is the actual reason for the unique color, and in fact, the darker sand leads the sea waves to take on a more intense and reddish hue as a result of the presence of iron oxides. Once you've taken a bath in these waters, the color will linger on your skin for several days.

When Hormuz Island began to gain popularity as a result of its distinctive geographical features, the general public connected the island with a variety of superstitions, including the apocalypse and the end of the world.

Hormuz Island's soil bed is a hotspot for geologists because it is a compelling painting with a kaleidoscope of colors. The seashore transforms from black to silver to ruby red in areas where the concentration of iron oxide is high. Blood-red dirt combines with seawater near the coast, dissolving further into cerulean waves as they go out to sea.

There are no swimming restrictions on Hormuz Island's Red Beach, however, the red ochre found in the soil may cause one's skin to remain stained for several days thereafter. It is also known as 'gelack' to refer to the red oxides prevalent in the soil of this island. Cosmetics, clothes, and pottery are all made with red ochre and various colors derived from the pigment. It is a common ingredient in the creation of food dyes and colorings. The food coloring is utilized in the preparation of a type of local bread known as 'tomshi.'

Because of volcanic activity on the island, the cliffs are adorned with rocks and boulders of various shapes. Hormuz Island, located in the Persian Gulf, has remained unexplored for many years. The island has a population of only three thousand people, which is considered small by international standards.

What Is The Best Way To Get To Hormuz Island?

There is a video on Reddit in which a lady is scratching the black sand of Hormuz Island, and red-colored sand emerges. That is so Fascinating. Then the red waves touch her feet. Really gives me Psycho Killer feelings. Check the video down below.

"The thing that infuriates me about Hormuz is that there are two seas flanking the Arabian Peninsula, they saw this, and decided to call the other one the Red Sea. It baffles and annoys me"

"How do you feel about Greenland and Iceland?"

"There's a humor to that. Greenland being icy and Iceland being green. It's an ironic switcheroo.

Hormuz Island, aside from the Bloody Red Beach Iran, is a kaleidoscope of sedimentary rock beds and formations smeared with hues of orange, red, green, golden, and blue, as well as a variety of other colors.