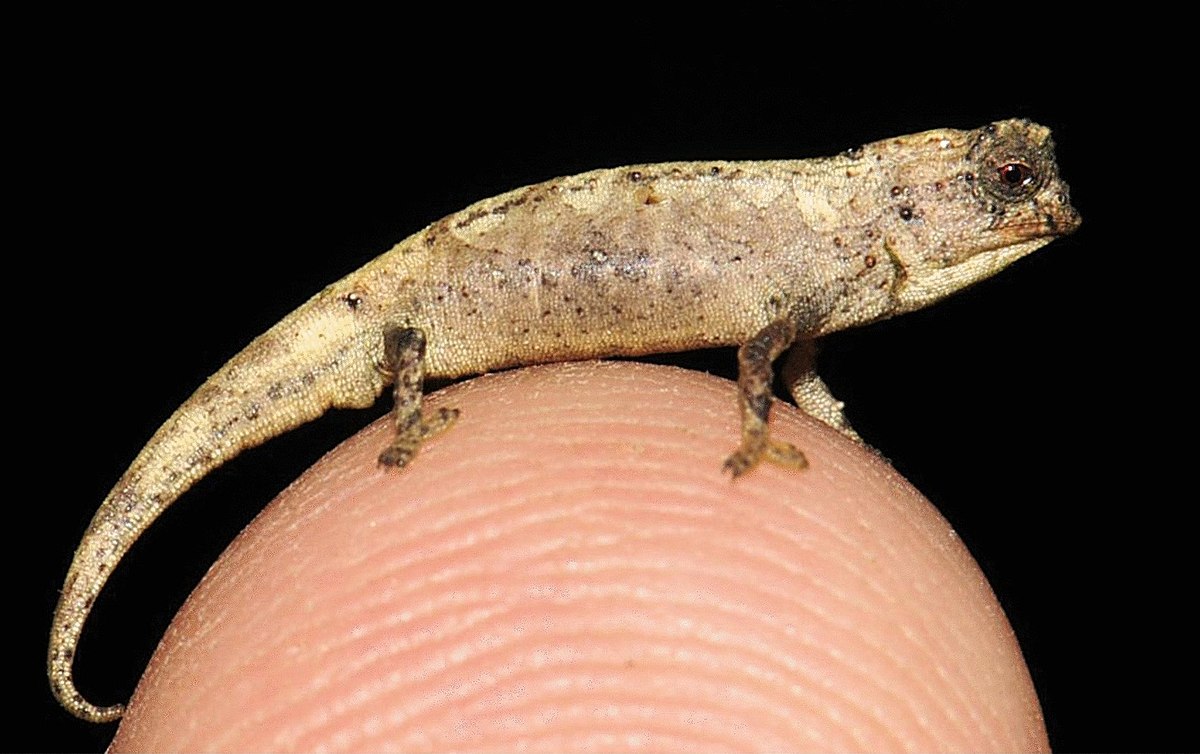 A tiny new species of chameleon, Brookesia Nana, has been found by scientists in a northern Madagascar rainforest area.

This so-called nano-chameleon is possibly the tiniest reptile on Earth; it is about the size of sunflower seed and fits on the tip of a finger (how cool is that).

Brookesia nana, or just B. nana, is a newly discovered species from the Madagascar rainforest area. It is so small that it is thought to eat mites and springtails that it finds in leaf litter.

"At the first glance, we realized that it was an important discovery," says Andolao Rakotoarison, a Malagasy herpetologist and coauthor of the new study published in Nature.

The discovery of such a small reptile raises interesting questions about the smallest vertebrates.

The male Brookesia nana which was seen first is thought to be the smallest adult male amniote ever reported. Its hemipenes (chameleon genitalia) were very big, the researchers said. 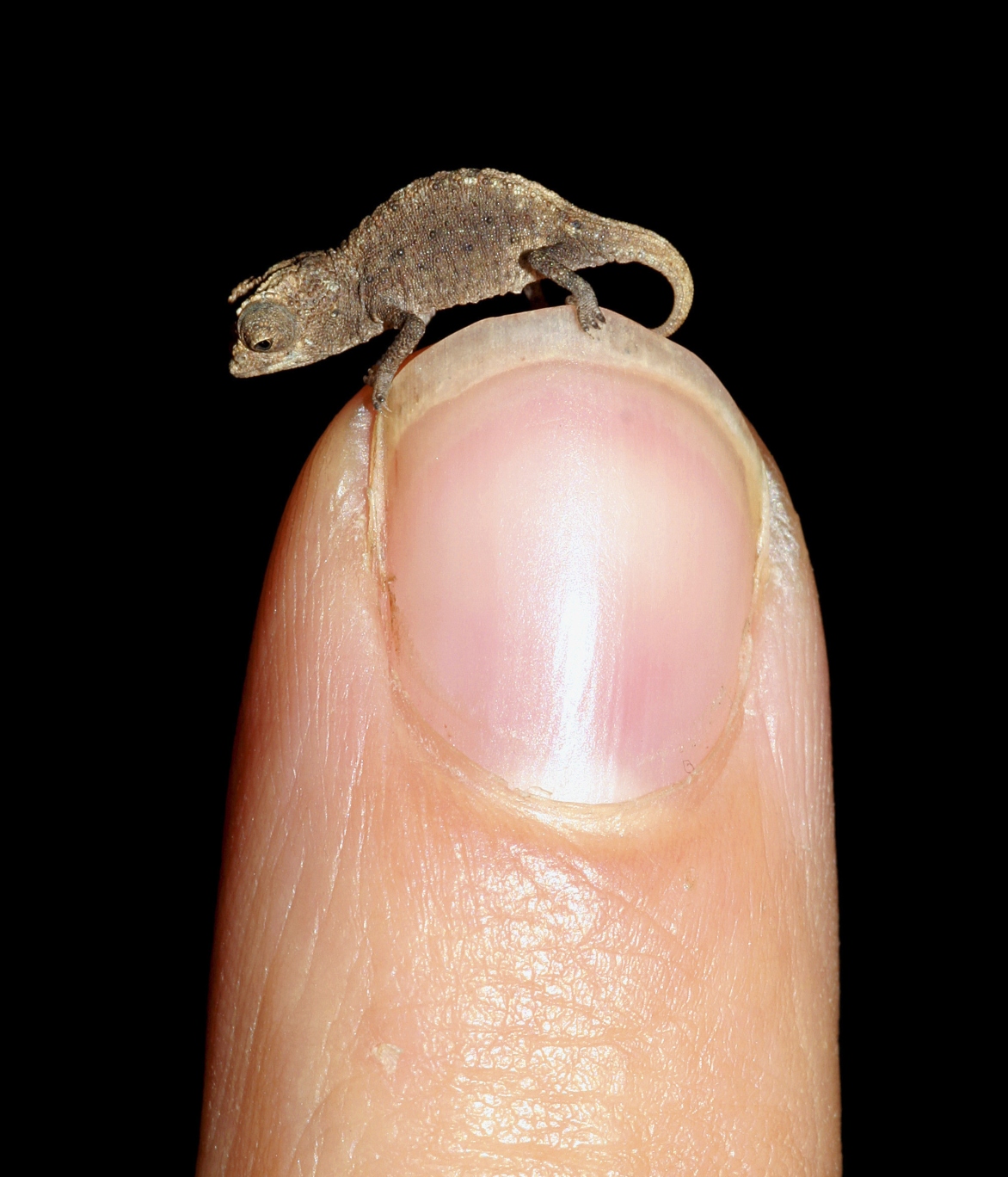 The classification of the above-mentioned species is given below.

"One of these lineages includes larger species of 3.4-6.6 cm snout-to-vent (SVL) length, while the other contains only highly miniaturized species.

"At present, 12 described species are known from this clade, none of which exceeds 3 cm SVL, with the smallest species Brookesia micra reaching a maximum adult female SVL of 1.99 cm.

"At a body length of just 1.35 cm and a total length of just 2.2 cm including the tail, the male ‘nano-chameleon’ is the smallest known male of all higher vertebrates," Dr. Glaw said.

A male Brookesia nana, often known as a nano-chameleon, has a body that is only 13.5mm long.

According to the Bavarian State Collection of Zoology in Munich, it is the smallest of the about 11,500 species of reptiles that are known.

It measures 22mm from top to bottom (0.86in). According to the institute, the female is much larger at about 29 mm, and other specimens haven't been found despite "much effort."

"The chameleon genus Brookesia consists of predominantly terrestrial species divided in two major lineages, which diverged from each other about 40-50 million years ago," said Dr. Frank Glaw, from the Bavarian State Collection of Zoology, and colleagues.

Most miniature Brookesia is rainforest species that mostly live in lowland forests and rarely goes higher than 1,000 m above sea level.

Other species favor dry forests, particularly in karstic soil, according to the researchers.

Only a limited number of species are known from more than two locations, and the bulk of species have extremely restricted home ranges. 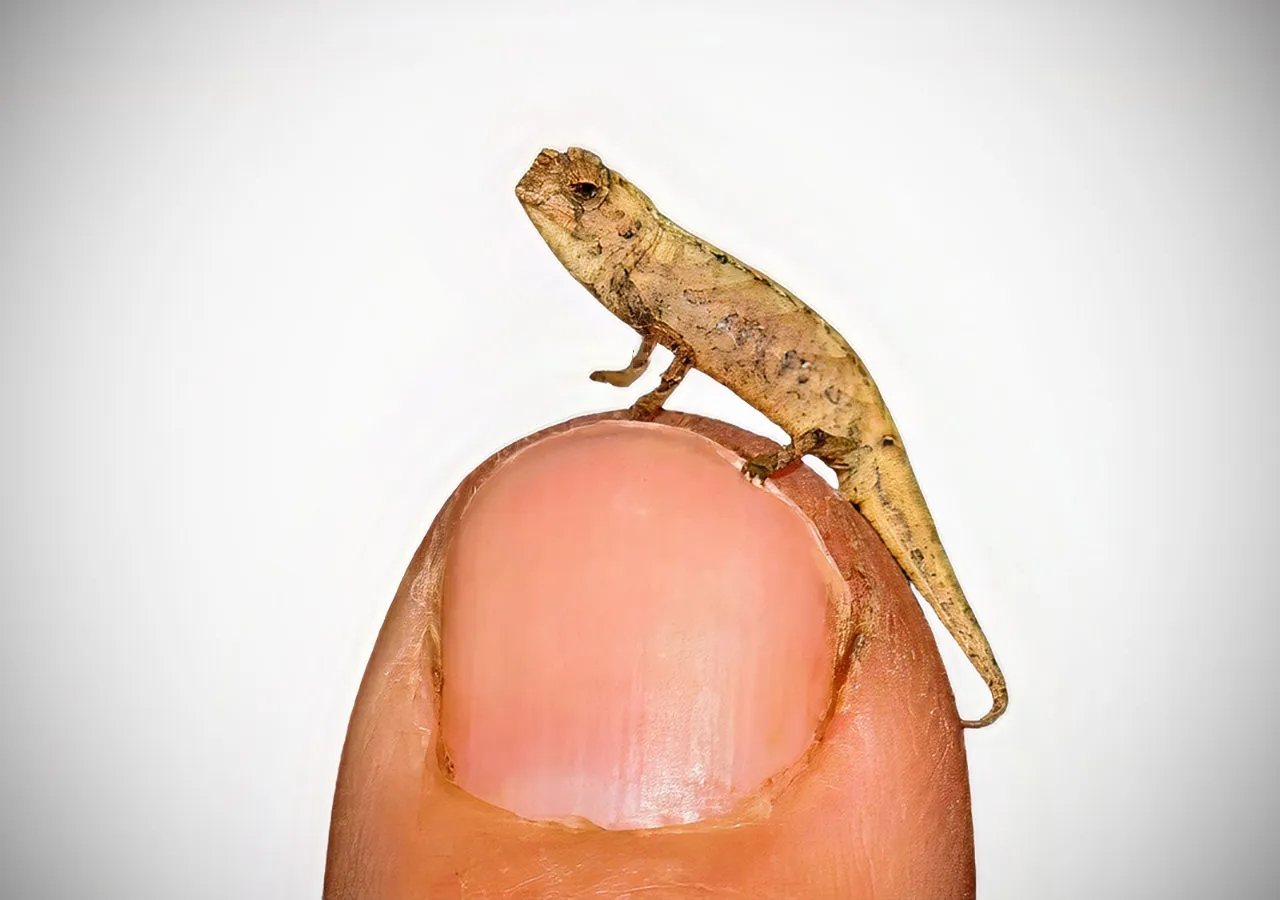 Brookesia Nana specimen on the tip of the human's finger

This little reptile has a projectile tongue like other chameleons, which it employs to catch prey.

The animals have learned to live well in their natural environment. During the day, they hunt on the jungle floor and hide in the grass at night.

According to Mark Scherz, an evolutionary biologist at the University of Potsdam in Germany and a collaborator on the study, if a larger predator comes calling in the dark, the wobble of the grass stalk warns the chameleon of danger, at which time it simply drops off into the underbrush.

Only two specimens have been seen by scientists thus far: a male and a female who were both taken in 2012 during an expedition to the Sorata massif, a collection of chilly, wet mountains.

According to researchers, the world's smallest reptile may be this nano-chameleon.

Its closest rival is a tiny chameleon species known as Brookesia Micra, which was first seen in 2012 when it was captured on camera perched atop a match.

Since only two people were found, it is hard to draw any big conclusions from the research.

Similar to how people come in a variety of heights, it's possible that other chameleons in this species will be bigger or smaller.

In fact, this family of chameleons is known for having larger females and smaller males, a trait known as sexual dimorphism.

Researchers think that the discovery of yet another small species of chameleon raises a lot of questions about how small vertebrates can get.

Scherz claims that although Brookesia nana is far smaller than the tiniest birds or animals, there are even smaller frogs.

However, there is a physical limit to how small a reptile can get. According to Gamble, the issue is part one of the surface area.

Even though it seems counterintuitive, smaller animals usually have a higher ratio of surface area to volume than larger animals.

The greater the ratio, the more vulnerable an animal is to water loss. The future of the little chameleon is unfortunately uncertain.

Rakotoarison says that a lot of damage has already been done to the mountain forest where they live.

According to Scherz, many residents in this area cannot afford to buy meat or rice. According to NASA, deforestation affects over 94 percent of Madagascar's once wooded territories.

Because of poverty and growing populations, rainforests have been cut down to make room for farms and cattle. 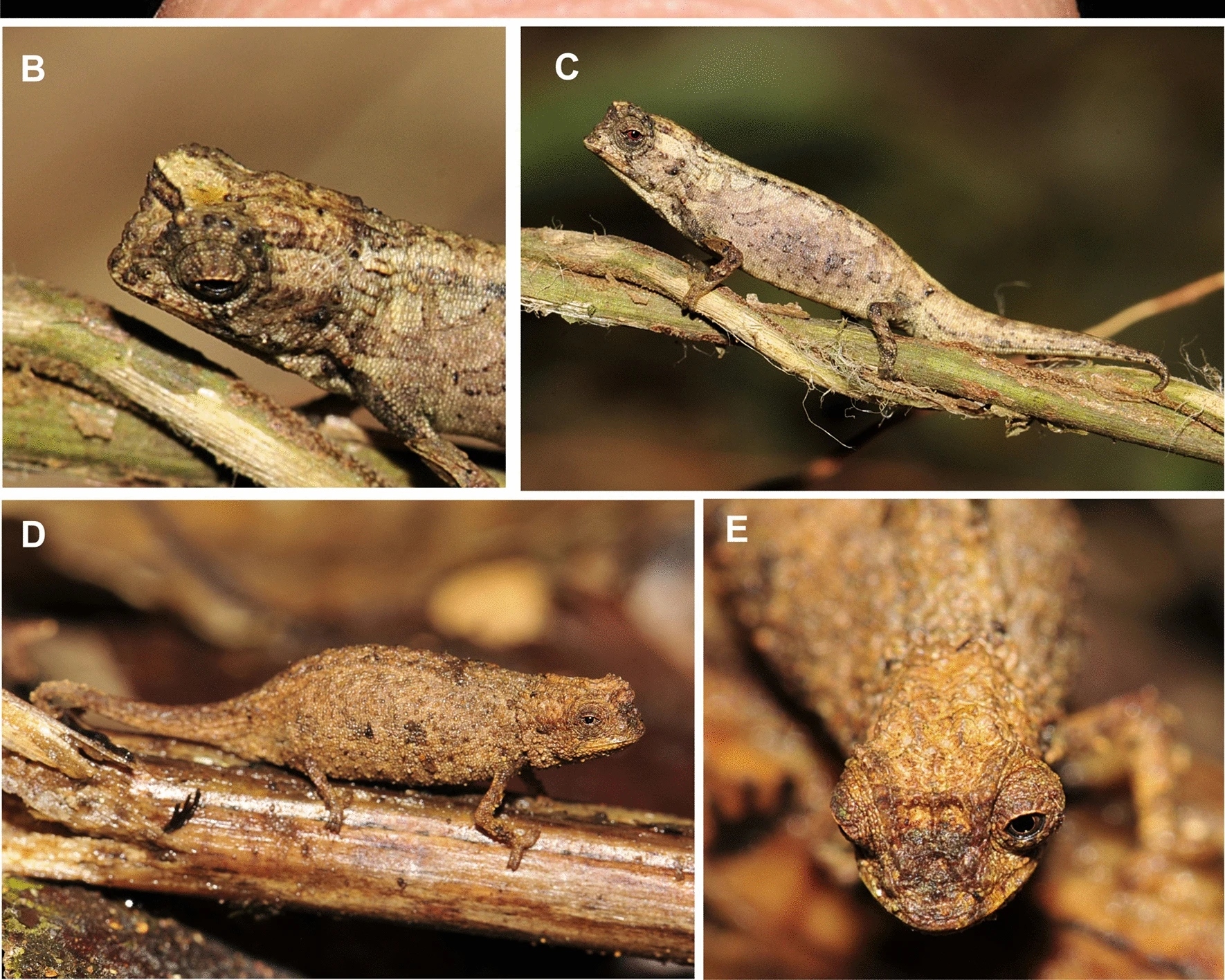 Additionally, it emphasizes Madagascar's astounding—and seriously endangered—biodiversity. The chameleon may soon be classed as severely endangered, according to scientists.

According to co-author Dr. Oliver Hawlitschek, a researcher in the Centrum für Naturkunde at Universität Hamburg, "unfortunately, the habitat of Brookesia nana is under heavy pressure from deforestation, but the area has recently been designated as a protected area, and hopefully, that will enable this tiny new chameleon to survive."

The new chameleon species will be a candidate for critically endangered status by the International Union for Conservation of Nature, a conservation organization, due to its small home range and threats to its environment.

The Sorata massif has recently been included in a new protected area in Madagascar, which is wonderful news.

A Reddit user, processingpowa, explained it in an interesting way, "This chameleon actually measures 3 feet in length, it is just so good at being a chameleon that it looks small."

How Big Is A Brookesia Nana?

What Does A Brookesia Nana Eat?

Brookesia nana, or B. nana for short, is a new species that is so little that it is thought to thrive on a diet of mites and springtails that it hunts down in leaf litter.

What Is The Smallest Pet Chameleon?

Pygmy Chameleons are the smallest species of chameleon, as their name implies, and grow to a maximum length of about 8 cm. There are roughly 19 different pygmy species, and several of them are well-liked as pets.

Brookesia Nana could be the world's smallest reptile, as described in 2021. Brookesia nana, unlike certain chameleons from the Brookesia species, does not change color.

Have you heard about Ayumi Takada and her really stretchy ears?