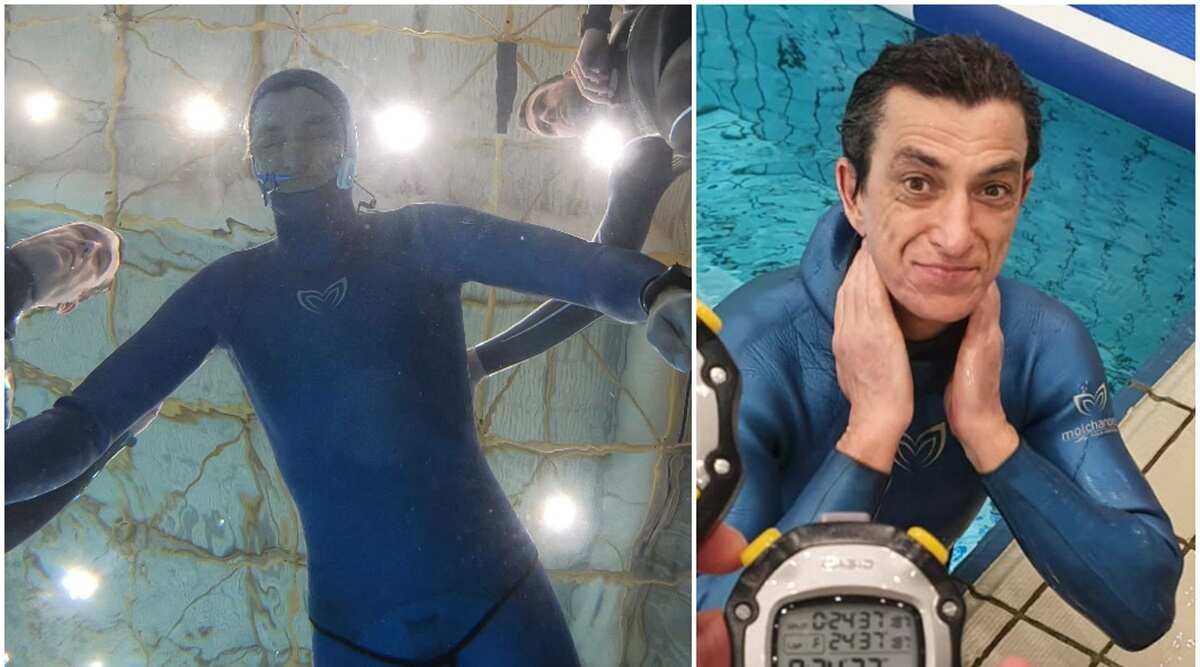 The majority of us have tested ourselves to see how long we can hold our breath underwater, but Budimir Šobat of Croatia has demonstrated that he is unparalleled when it comes to this ability.

What Is The World Record For Holding Your Breath Underwater 2021?

On March 27, 2021, he achieved the astounding duration for the longest breath held underwater of 24 minutes 37.36 seconds.

That takes up more time than an entire episode of The Simpsons!

He broke the previous record (held by Aleix Segura Vendrel) by 34 seconds, which is a significant amount of time when you're not breathing, and it's certainly longer than the average person could hold their breath.

In Sisak, Croatia, which had been struck by a powerful earthquake in December 2020, Budimir made an attempt to break this record in order to raise money for earthquake victims.

We have a huge problem here in Croatia with earthquakes... the situation is serious at the moment in Croatia. We hope to raise some money for people in need because earthquakes destroy the whole city of Petrinja.

Due to the destruction caused by the earthquake, Budimir stated that it was "impossible to practice" at the beginning of this year.

However, the freediver, who was 56 years old at the time, was intent on shattering this record, and he continued with his training as soon as he was able to.

Obviously, it took him more than a couple of weeks to hone his breathing technique and get in record-breaking shape for this performance.

This journey is tough and full of unexpected situations where you can easily get stuck.

The thought of Budimir's daughter is what keeps him going, even if he is aware that trying a record as this comes with its share of challenges and risks.

The greatest motivation of all is my 21 years old daughter Saša who has autism. My results are giving me the media space and then I can speak about autism awareness.

Nevertheless, while Budimir was truly aiming to break the record, he was only paying attention to one thing: the rate of his heartbeat.

While I am doing my maximum static apnea I have my eyes closed and all I am focused on is to try to hear my heartbeat. Once I heard it I became calm and ready to fight the time.

And fight the time he did!

After 24 minutes and 37.36 seconds, he broke the previous record and set a new one.

Before attempting to break the record, Budimir hyperventilated with pure oxygen for up to thirty minutes before the start of the attempt.

The standards for this record allow for this type of preparation for up to that amount of time.

The fact that Budimir didn't start freediving until he was 48 years old is a significant factor in the impressiveness of his accomplishments.

I am addicted to training of any kind so I have no problem with motivation and I never stop dreaming about achieving the top results in spite of my age. Now I have proved that everything is possible if you are strong and dedicated. In fact, my age gave me a benefit of experience to stay calm at the critical moments.

He continues by saying,

Of course, you have to be a little bit mad.

What Are The Prerequisites For Becoming A Freediver?

According to Budimir, the most important thing is to get through the mental obstacles that come with doing sports.

Freediving is first of all a mental sport. If you can be stronger than your mind you will succeed.

You will be successful if you are able to overcome the limitations imposed by your thoughts.

These are his top three pieces of advice:

The previous record for the longest time a man deliberately held his breath was 24 minutes and 3 seconds, and it was set by Aleix Segura Vendrell of Spain on February 28, 2016, in Barcelona, Spain.

The record has come a long way since the first documented attempt, which was carried out by a man from the United States named Robert Foster on March 15, 1959, in a swimming pool located in San Rafael, California.

During this attempt, he held his breath voluntarily for 13 minutes and 42.5 seconds while submerged in 3.05 meters (10 feet) of water.

What Is The World Record For Holding Your Breath Underwater 2022?

There is no new record of 2022 for holding breath underwater, so 2021 Budimir Šobat holds the place until now.

Another user explained the process, "Low body temp drops metabolism through the floor, requires less oxygen. Cells didn't actually freeze, so there was no water crystallization that would have damaged the cells. So he was at the perfect temperature to majorly lower the need for oxygen and come out of it unscathed."

Who Has The Record For Holding Their Breath The Longest?

What Is The Longest Time A Human Has Held Their Breath Underwater?

24 minutes 37.36 seconds is the longest time a human has held their breath underwater.

Budimir Šobat has the record for holding their breath underwater which is 24 minutes and 37.36 seconds.

Have you heard about Budimir Šobat before? Did you like his success story? Do let us know in the comment section below.