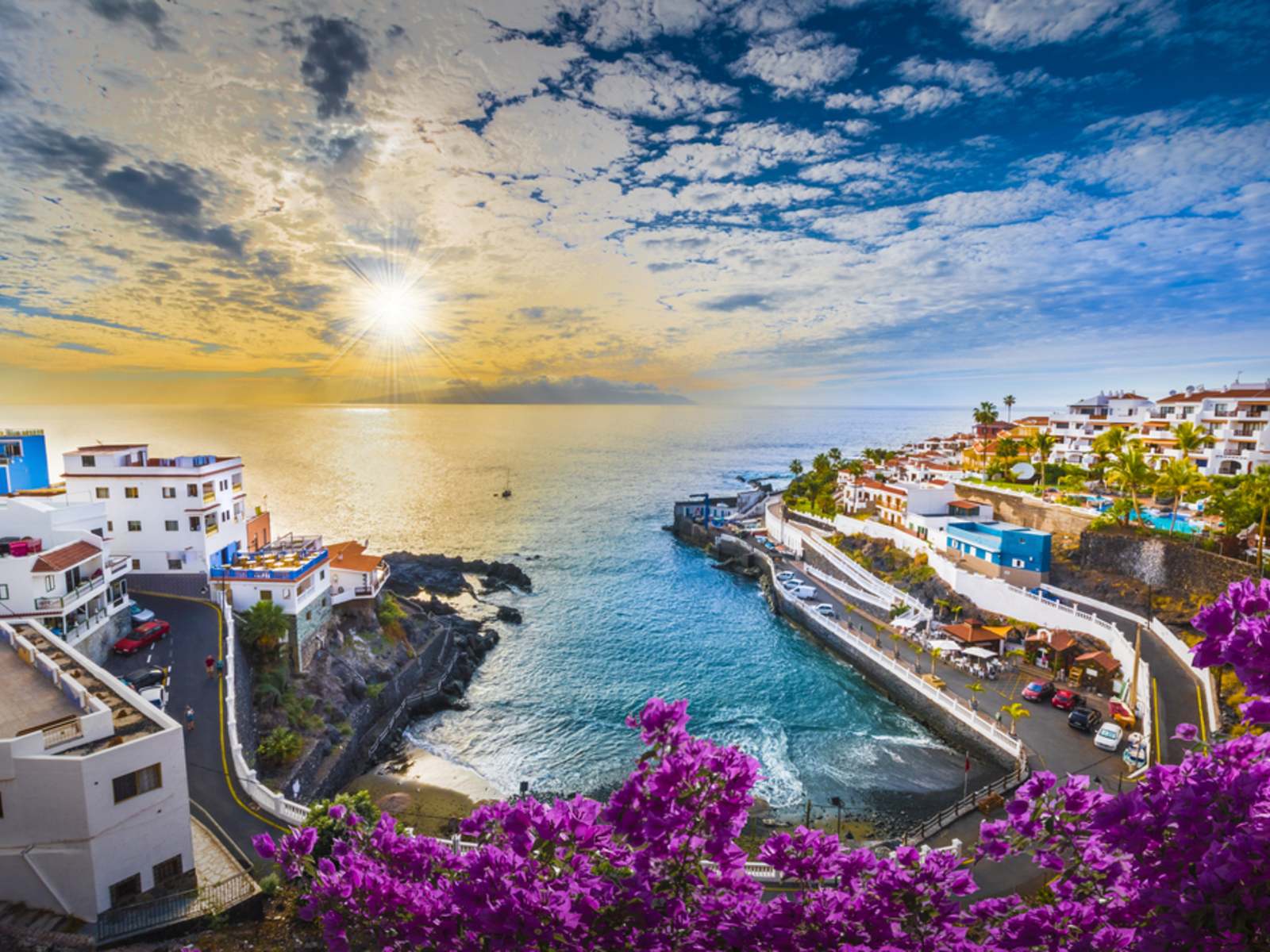 The Canary Islands are a Spanish autonomous territory in the Atlantic Ocean, 62 miles or so from Morocco. These islands, which are referred to as the "sunny capital of Europe," are famed for their comfortable temperatures and abundance of breathtaking natural wonders.

In reality, the archipelago contains four national parks, and five of its seven islands have been designated as Biosphere Reserves. Its beaches are its best features; they're ideal for sunbathing and participating in water sports like windsurfing and scuba diving.

Amazing landscapes that are perfect for hiking, cycling, rock climbing, and even caving may be found in the interior. The volcanic landscape of Lanzarote, the sand-dune-lined beaches of Fuerteventura and Gran Canaria, or the verdant woods of La Palma and La Gomera, are just a few of the most breathtaking.

Since ancient times, the archipelago has been referred to as the "island of dogs." On the Canary Islands' coat of arms, there is also a theory of how the islands and dogs are connected which is discussed later. But, first, have a detailed look at Canary Islands' introduction.

The Canary Islands, which have a total area of around 2,893 sq. miles, are Spain's most southerly autonomous region. It is Macaronesia's largest and most populous archipelago.

The Canary Islands are made up of seven sizable islands and countless smaller ones. Tenerife, the largest and most populated island in this archipelago, is home to 904,713 inhabitants and has an area of 2,034.38 sq km.

The second-largest and most populous Spanish island is Tenerife. With around 865,070 residents, Gran Canaria ranks second among the Canary Islands in terms of population. Fuerteventura, with a total area of 1,660 sq km, is the second-largest island in the archipelago. 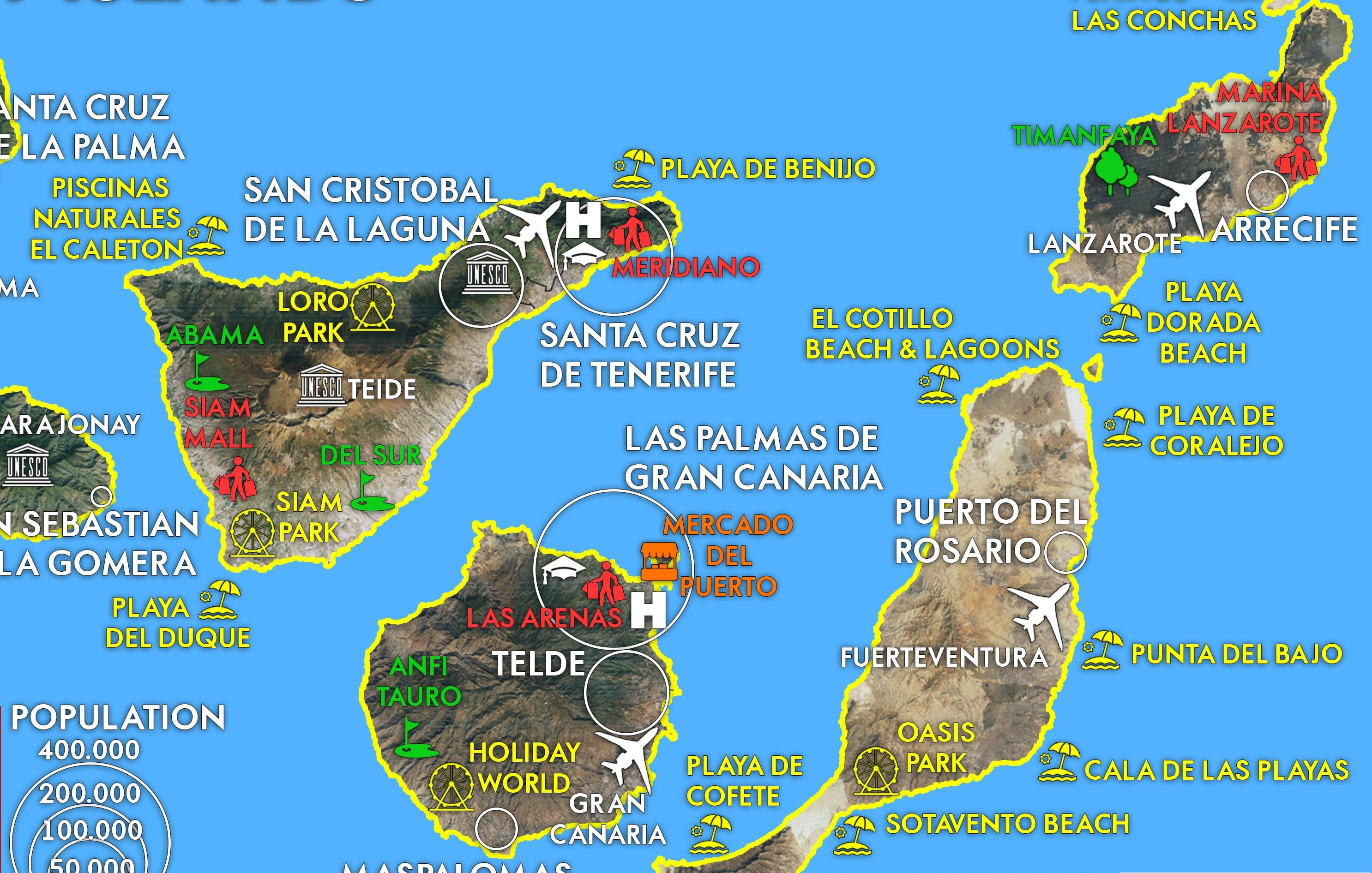 Geographical maps of the Canary Islands

Over 2,127,685 individuals called the Spanish archipelago home in 2018. A rough estimate of population density for the Canary Islands is 740 people per square mile. It ranks as Spain's ninth most populous autonomous community.

Although Spanish is the official language, English is commonly spoken and understood, so you won't have any issues. There is also the regional tongue. Guagua for bus and papa for potatoes are two words that are different from Spanish that you could find handy. Yes, potatoes are a common ingredient in Canarian food.

La Gomera has a native tongue, but you won't likely hear it. Silbo Gomera, the island's centuries-old whistle language, is used to communicate with the deep valleys. The tradition is taught in the neighborhood schools to preserve it. If you're interested, ask some locals to tour you around.

The only region of Spain that has seen volcanic eruptions in the contemporary era is the Canary Islands. The Mount Teide volcano is the tallest in Spain and the third highest volcano in the world.

On the island of Tenerife, Mount Teide rises to a height of 12,198 feet. With the exception of La Gomera, every island in this Spanish archipelago has volcanic activity records from the last million years. 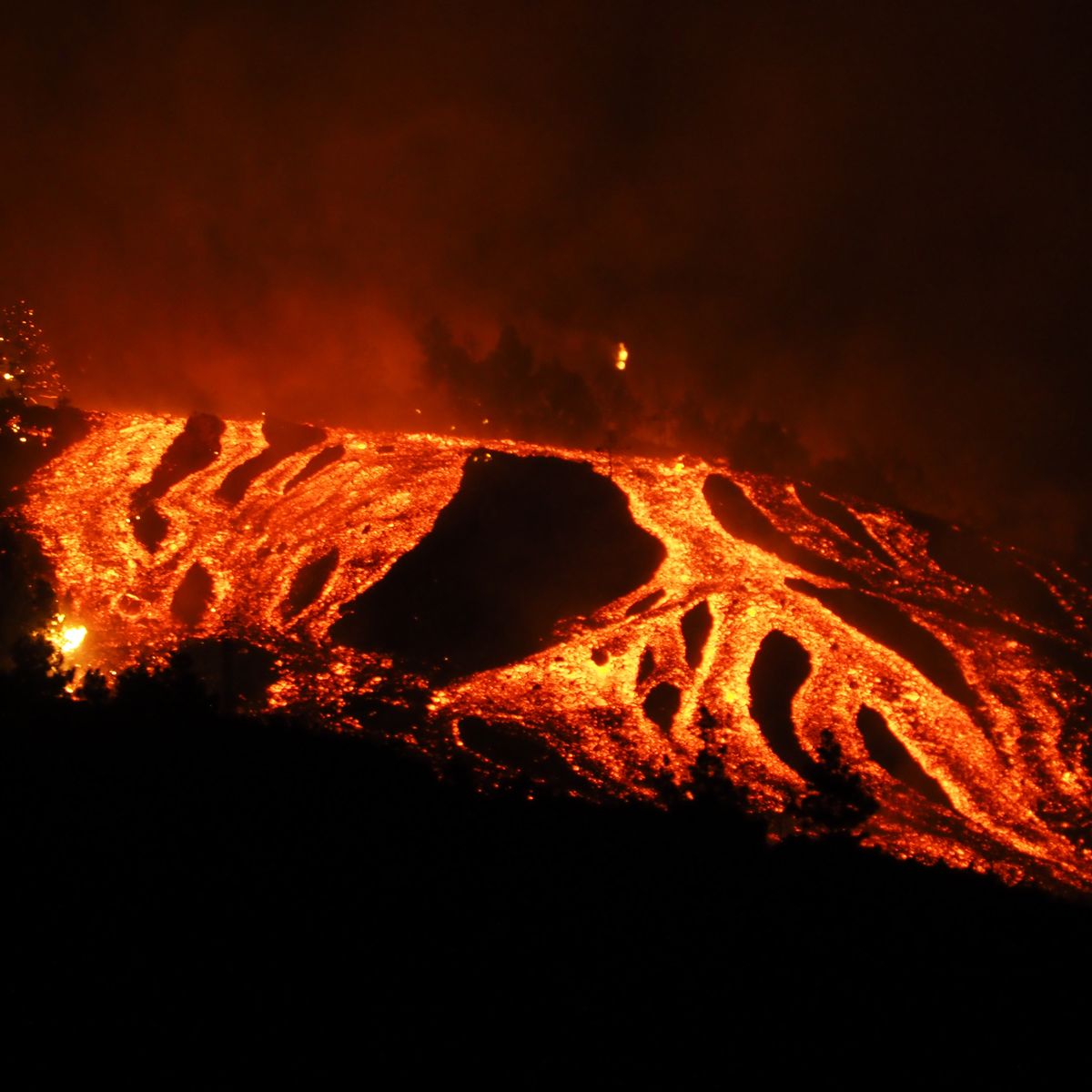 Volcano eruption in one of Canary Islands

The Canary Islands, as they are more commonly referred to, have a subtropical, dry climate all year round because of their location off the coast of Africa. It is no accident that northern Europeans who wish to escape the cold on their home continent frequently travel there in the winter.

The ideal seasons to travel are spring and fall because of the good weather, fewer people, and cheaper rates. The summer months also experience a significant increase in tourism. In February, November, and December, the most rain falls.

Tenerife is unusual in that the island's volcano, Mount Teide, splits it into two climate zones: the south, which is dry, arid, and acrid, and the north, which is much greener due to higher rainfall and cloud cover.

On rare occasions, trade winds will bring sand from the Sahara. The wind occurrence, known as la Calima, or "the haze," decreases visibility and air quality for two to three days and coats everything in a film of dust.

Where did the name "Canary Islands" come from? Since the bird was named after the islands rather than the other way around, it is clear that it is not from the Canaries. You have your doubts about the popular belief that the islands were named after canines.

The Latin term "Canariae Insulae," which translates to "the island of dogs," is the source of the Spanish name for the archipelago, Islas Canarias.

It is believed that Grand Canaria was given the name Canaria by King Juba II of Mauretania, an ancient kingdom in the Maghreb, since the island was home to many enormous dogs. The Canary Islands eventually began to be used to describe the entire archipelago. 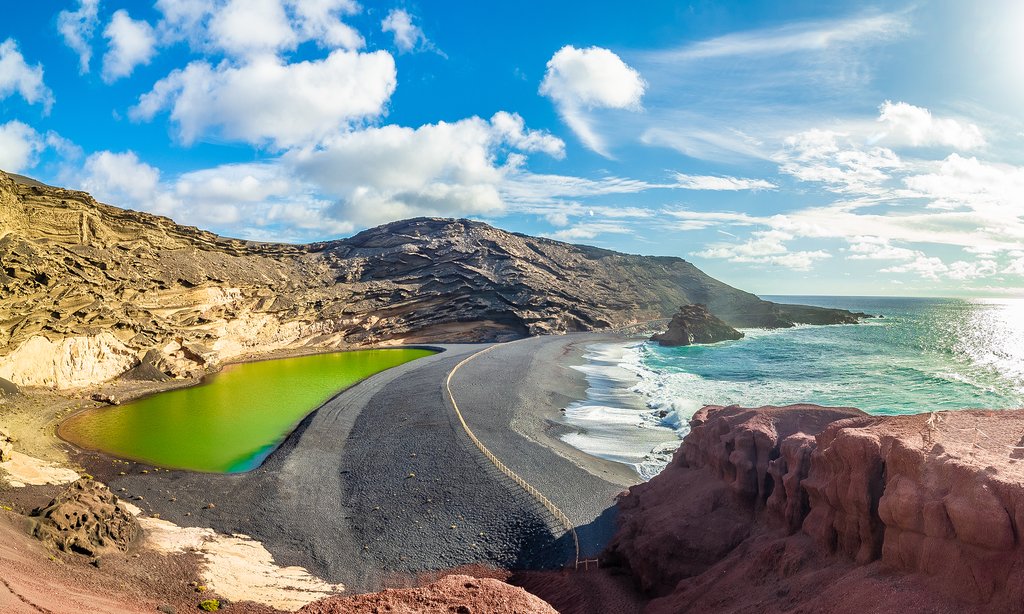 A beautiful beach in Canary Islands

Another hypothesis is that the Guanches, the Canary Islands' first occupants, are responsible for the name. The Guanches worshipped and mummified dogs as heavenly creatures. Anubis, the dog-headed Egyptian god, and the Guanches' dog-worship are believed to be related.

Here are some different theories about the name of Canary Island:

The most common theory for the name is that it derives from Canariae Insulae, a Latin term that means "Islands of the Dogs." According to the legend, an expedition led by the Mauritanian king Juba II, who was a strong Roman ally, went to the Canary Islands. There, they found "great swarms of very large dogs."

Pliny the Elder, who wrote his Natural History around 77 AD, included Juba II's discoveries (see below). He made explicit reference to the large dogs on the Canarian island. It sounds terrific, but there is a problem. There is no proof that there were large dogs roaming the islands at the time.

Although his voyage found huts, Juba II also claimed that the islands were deserted. However, you now know that the original Canarians were present in the Canaries during the time of Juba's rule.

There was formerly a sizable colony of Mediterranean monk seals living in the Canary Islands, particularly on Lanzarote and Fuerteventura. Early sailors called them "sea wolves." Monk seals may have been the "dogs" that gave the Canary Islands its name, despite the fact that they are now extinct there (a few remain in Madeira to the north).

Archaeologists' recent discovery of a Roman village on the islet of Lobos, north of Fuerteventura, has given this theory new life. They appear to have used Lobos as a base and traveled to the Canaries to obtain purple dye from Murex shells.

Nobody really knows why the Romans settled on Lobos Islet, although it was presumably because there were many seals and seabirds there that could be eaten.

The Canary Islands' enormous lizards are only approximately 80 cm long now, but they were originally much larger. Giant lizards from the Canary Islands were the genuine giants before there were people and their cats, rats, and hedgehogs.

Only a few thousand years ago, there existed subfossil records of lizards up to 150 cm long. Perhaps rather than large dogs, Juba II's expedition discovered enormous lizards in the Canary Islands. Pliny mentions the lizards on the island of Capraria.

Another idea is that the Canarii tribe of Berbers from the Atlas Mountains in what is now Morocco were the first people to live on the islands. Despite the fact that no one is certain how a mountain tribe arrived in the Canary Islands, you do know that the earliest Canarians, also known as the Guanches, were descended from Berbers.

It's probable that either the Romans or the Phoenicians transported Canarii tribespeople to the Canaries. Why?

Either to establish a supply base outside the Mediterranean or to drive out a hostile tribe. It's interesting to note that, according to a Guanche tradition, they were descended from royalty from a distant land.

Which Canary Island Is The Nicest?

In addition to being the most beautiful Canary Island, La Palma has a fascinating volcanic landscape. It may not be as popular as Teide or Timanfaya National Parks because its creation is much more recent.

Why Was Canary Island Named After A Dog?

The islands get their names from a Latin term - Insula Canaria - which means "Island of the Dogs." The ancient Romans, who first visited the islands, gave them this name. Some historians believe the name came from the fact that the original residents of the islands worshipped dogs.

Were There Dogs In The Canary Islands?

The Presa Canario is a Spanish breed of large dog of the mastiff or catch dog type. It originates in the autonomous region of the Canary Islands, and is found mostly in the islands of Gran Canaria and Tenerife. It was formerly known as the Dogo Canario.

The Canary Islands also provide a variety of cultural possibilities to discover, such as the UNESCO-designated World Heritage Site at San Cristóbal de La Laguna and the works of César Manrique in Lanzarote. You can also take in Santa Cruz de Tenerife's stunning Carnival if you travel there in February.