What Is So Special About Casa Sayrach Barcelona? 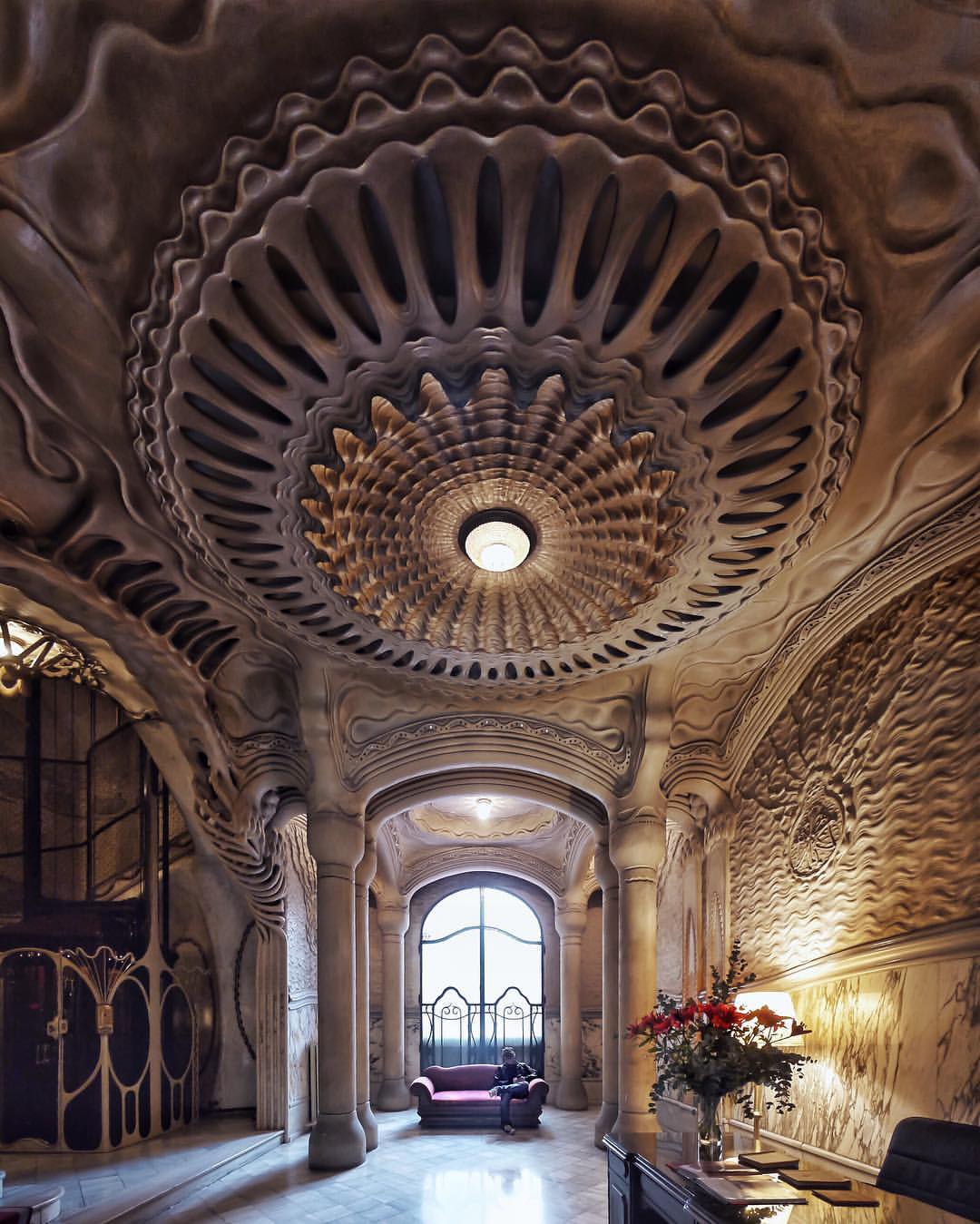 As one of the final Modernist structures to be built in Barcelona, Casa Sayrach has earned the nickname "Casa de la nata," or "Casa de la crème," due to the color of the stone and the shape of the mansard roof.

Building in 1918, this home is an outstanding example of late Modernism in Barcelona. The house was designed by Manuel Sayrach I Carreras, despite the fact that his plans were signed by Gabriel Borrell, the house's promoter, at the time of its construction because the young architect had not yet completed his degree at the time.

Even though the house is a private space and cannot be visited by anyone other than those who have made a reservation at La Dama Restaurant (which has a separate entrance, the left door on the upper photo), some of the design elements of the hallways can still be seen through the glass of the main entrance door. 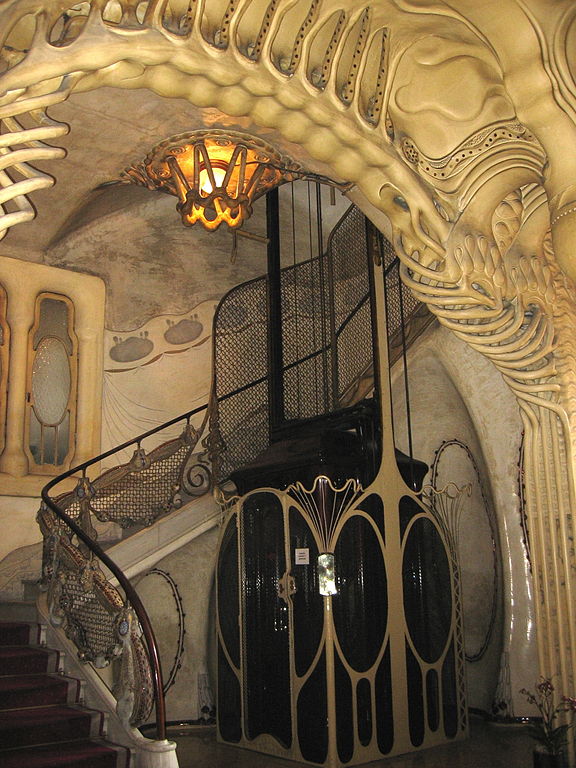 Architect Manuel Sayrach embraced the notion of 'total art' as articulated by Richard Wanger: that various manifestations of art can be combined to create a unique work. This notion was one of the pillars of Catalan Modernism, which was itself a product of that romantic spirit.

Sayrach selected the manifestations of this movement that characterized the beginning of the twentieth century that most suited his aesthetic preferences. As a result, all of the building's lines are soft and sinuous, and all of its architectural features, particularly those of the interior, are inspired by nature: stalactites, tentacles, leaves, or sea animals, for example. Manuel Sayrach I Carreras (1886-1937) was the son of a surgeon and worked as a collaborator for La Publicitat I La Veu de Catalunya from a very young age. He died in 1937.

Despite the fact that he was never a leader of any political party, he was a staunch advocate of republicanism. His first architectural project was the reconstruction of his family's home in Sant Feliu, which was regrettably devastated during the Spanish Civil War. In 1915, he completed the Casa Sayrach project, and in 1924, he completed the Casa Montserrat project, which was completed on a reduced budget.

The Modernist movement in general and Gaud in particular definitely inspired his work at a period when the Noucentisme style was being enforced, which may explain why his work has received less attention than it deserved. Some of its buildings were also destroyed during the war, while other projects such as the memorial to Pi I Margall were never completed. 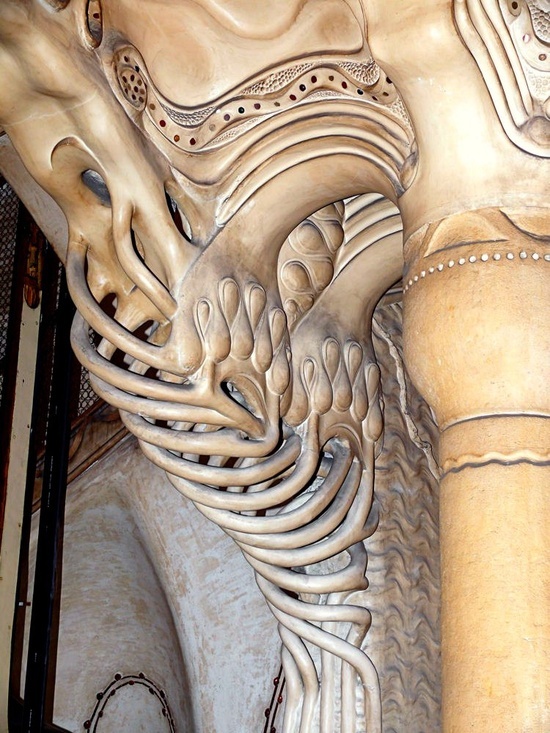 Barcelona's Avinguda Diagonal is home to one of the city's final modernista structures, which encompasses what the city's masters of the style had accomplished in the city before their passing. Beautifully subtle, the façade's graceful and exquisite contours are the source of its allure.

When this late-modernista structure was constructed on the corner of Carrer Enric Granados and the Avinguda Diagonal in 1918, it was one of the few remaining examples of the style at the time of its construction. Even though Gabriel Borrell signed off on the project, it was actually built by Manuel Sayrach, the son of the project developer who is also an architect and writer. Sayrach had not yet completed his degree at the time he is believed to have designed this remarkable structure, which demonstrates the unmistakable influence of Gaud in the use of the curve in its design.

In the corner of the building, a thin turret is perched on top of a rounded corner. Another notable feature is the overhanging balcony, which is supported by columns and has enormous windows. The lobby and stairwell of the skyscraper are elaborately decked in gold and silver.

Even if you've never seen a Gaudi building before (which is unlikely if you've ever set foot in Barcelona), the effect of the grandmaster of modernist Catalan architecture is undeniable. Gaudi's influence can be seen everywhere. There are a central nave and two sides that come together at the top of an impressive staircase, which is planned out like a temple itself. The undulating designs on the ceilings, railings, and even the door handles evoke images of the Mediterranean sea, which is not surprising.

The organic shapes and curves are comparable to those found in any of Gaudi's masterpieces, but especially in La Pedrera, where they are particularly striking. This is not to argue, however, that Sayrach lacked creativity in his architectural design. No, not at all. For the same reason that Antoni Gaudi felt that stones contain stories, he manifested the ocean, its inhabitants (particularly whales and jellyfish), and the walls of Casa Sayrach interior in the form of rock formations and walls.

The overall result is the disconcerting (or fantastic, depending on your perspective or mental age) feeling of entering directly into the interior of an ancient whale after walking out of the scorching Mediterranean sun. Using the stomach of an oceanic beast, Sayrach built a dwelling for himself and his family (and it continues to have residences, so please, shush as you walk around). Whatever you think of his design abilities, his dedication to his family is unquestionable.

"Gaudi style always reminds me of the exoskeleton of Alien"

Sayrach's Architectural Monument To His Wife

If you still have any doubts, take a short trip across the street to Casa Montserrat, Sayrach's architectural monument to his wife, who died tragically young at the age of 26. Few individuals can match Sayrach's wife, Montserrat Fatjó dels Xiprers when it comes to emo. In addition to being twenty years younger than her spouse, she has a penchant for the theatrical.

A few days before she died in 1932, she requested that Sayrach dress her in a bridal gown so that she may greet him in paradise dressed as a bride. She also wished to be encircled by candles from the baptisms of their children, which she accomplished. Because of this, Sra. Fatjó dels Xiprers was able to see Casa Montserrat, Sayrach's architectural monument to her before she passed away in 2007.

He memorialized his feelings for her and his devotion to her right in the middle of the central lobby. In addition to two Ms to represent Montserrat and Manuel, two five-pointed stars to signify their five children, are also featured on the design. Casa Sayrach and Casa Montserrat each have a lot more to offer than their outside façade would lead you to believe. Both are worth exploring.

What Restaurants Are Near Casa Sayrach?

In the middle of a hot summer day on A/Diagonal, you'll walk past Casa Sayrach building with a roofline that appears to be melting just as much as you are under the heat of the Mediterranean sun. Go inside and let your eyes adjust slowly as you take in the incredible details and dedication to love and family carved into the stone.