Casu Marzu Cheese - The Most Deadly And Bizarre Cheese Type 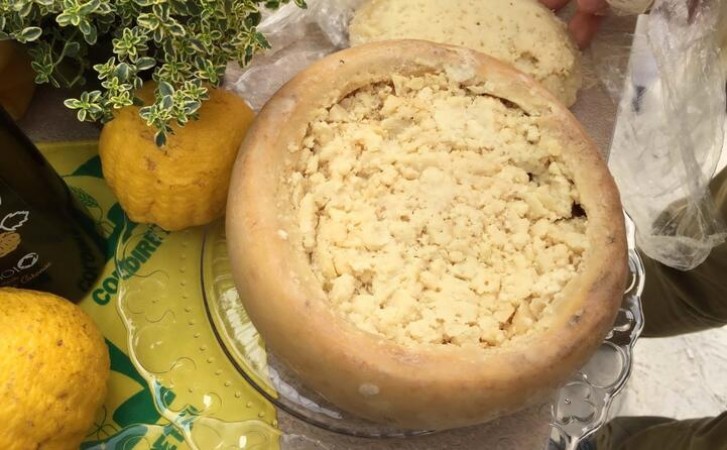 Casu Marzu is known as the "most deadly" cheese in the world, Casu Marzu derives its distinct flavor from the cheese skipper fly. Fly eggs are deposited in the cheese, and maggots (larvae of common fly) consume them, turning the cheese into a creamy paste before it is consumed. 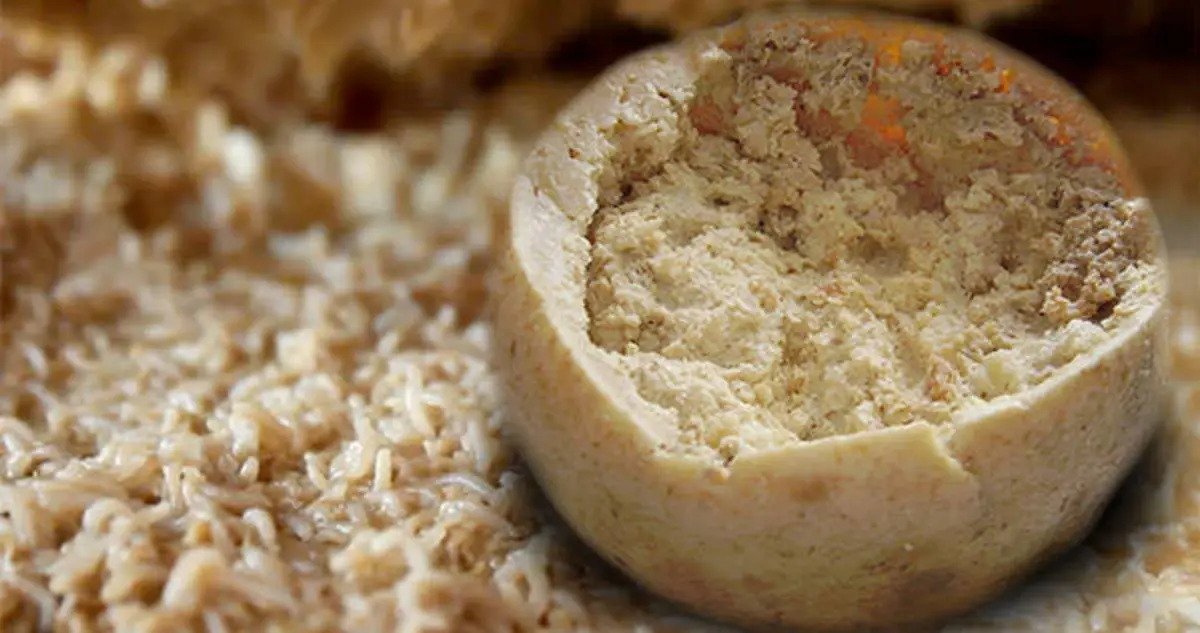 Casu marzu cheese loaf with white maggots around it

How Casu Marzu Cheese Is Made?

Casu martzu is a cheese made from pecorino that has progressed past the ordinary fermentation stage to a stage of decomposition, which is caused by the digestive action of the larvae of the cheese fly, which belongs to the Piophilidae family. These larvae are intentionally inserted into the cheese, resulting in a higher level of fermentation and breakdown of the cheese's lipids than would otherwise occur.

The texture of the cheese changes to become very soft, with some liquid (known as làgrima, which is Sardinian for "teardrop") leaking out. The larvae themselves are translucent white worms that measure approximately 8 mm (516 in) in length. 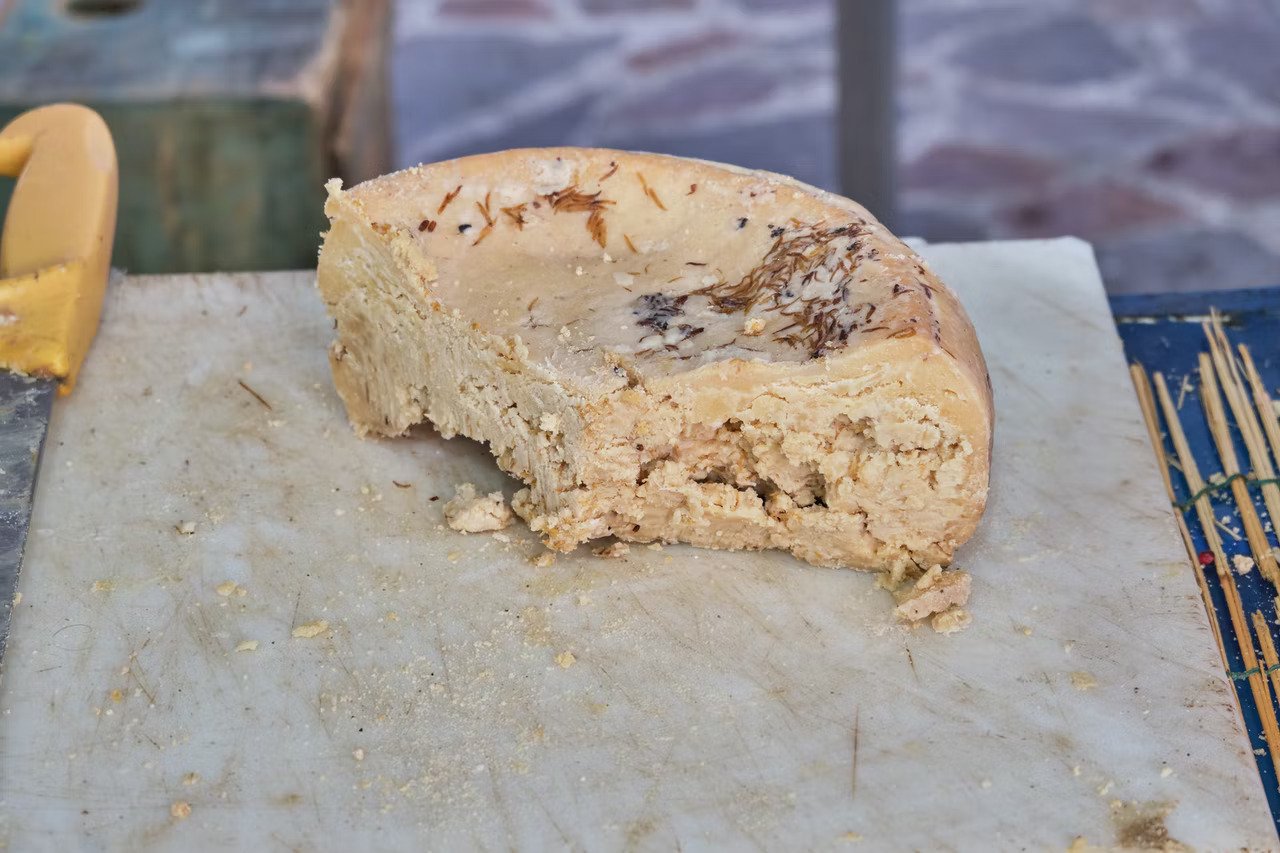 A quarter piece of casu marzu cheese on a white slab

In order for the eggs of the cheese fly Piophila casei to be laid in the cheese, complete pecorino cheeses are left outside with a portion of the peel removed. This allows the cheese to develop a distinctive flavor. A female P. casei is capable of laying more than 500 eggs in a single sitting. On the fifth day, the eggs hatch, and the larvae begin to munch their way through the cheese. The acid produced by the maggots' digestive mechanism breaks down the lipids in the cheese, resulting in a particularly soft texture. A normal casu martzu will have thousands of these maggots by the time it is ready for consumption.

When the Casu Marzu maggots have perished, Casu martzu is deemed dangerous to eat by Sardinian cheese connoisseurs.

In order to avoid this, only cheese that contains maggots that are still living is typically consumed, however, exceptions are allowed for cheese that has been chilled, which results in the maggots being killed.

In Sardinian cuisine, when the cheese has fermented sufficiently, it is often chopped into thin strips and put on moistened Sardinian flatbread (pane carasau), which is then eaten with a powerful red wine such as cannonau.

Sardinians believe that Casu martzu is an aphrodisiac, which is why they consume it. Because the larvae in the cheese have the ability to launch themselves up to 15 centimeters (6 inches) when disturbed, it is important to keep them away from children. [In order to prevent the maggots from leaping, diners keep their palms above their sandwiches.

Some people who eat the cheese do not want to consume the maggots. Those who do not desire to consume them should store the cheese in a tightly sealed paper bag before storing it. Maggots wriggle and bounce in the bag, causing a "pitter-patter" sound as they struggle to breathe because they lack oxygen. When the noises cease, the maggots will have died and the cheese will be safe to consume.

This Rare Cheese Is Infested With Live Maggots

Is Casu Marzu Safe To Eat?

It is a type of Italian cheese that has been deliberately made to serve as a breeding environment for maggots. While casu marzu is sometimes referred to as a fermented Pecorino cheese, it is actually in the process of decomposing. It is believed that the cheese is safe to eat as long as the maggots are still alive in the cheese.

But people have a lot to say about this weird cheese type on Reddit.

"Imagine being the first person to try it- 'Yeah, the cheese is a little spoiled...ah, fukit, brush the maggots off, it's still ok'."

"This group of people of a history of weird cheeses. One in particular is made by placing raw goat milk in a baby goat stomach and letting it ferment for 4 months."

"Nope, they don't even brush off the maggots, they're eaten with the cheese"

What do you think of Casu Marzu cheese? It is the most bizarre food item that one can think of.