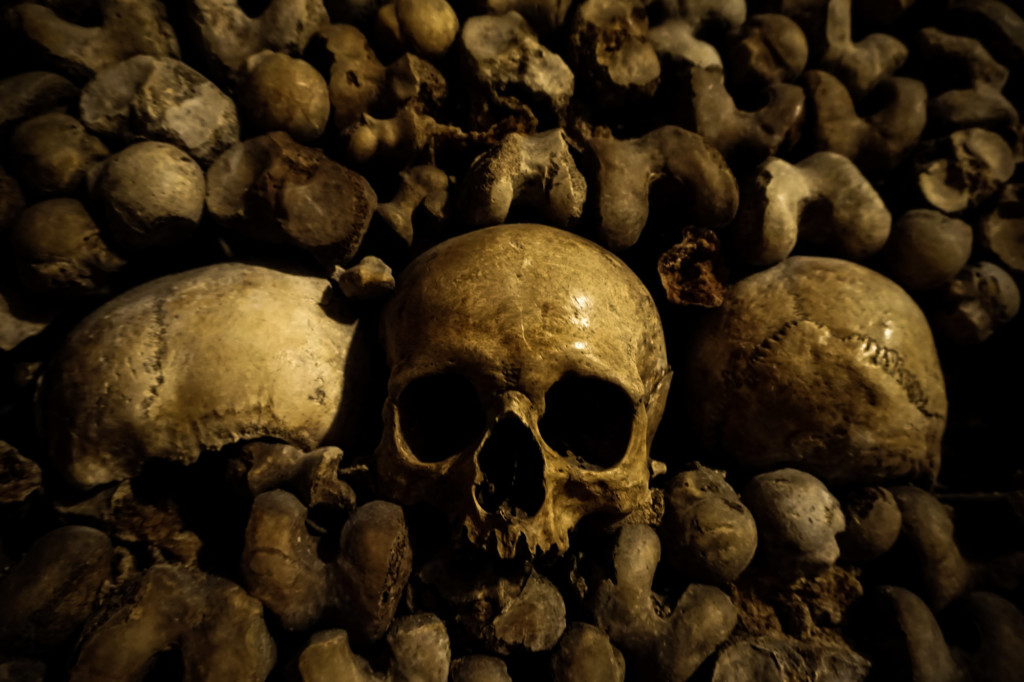 The Catacombs of Paris (French: Catacombes de Paris) are underground ossuaries in Paris, France, which hold the remaining parts of in excess of 6,000,000 people in a little piece of a passage network worked to solidify Paris' antiquated stone quarries.

Why Are The Paris Catacombs Famous?

Known as the 'World's Largest Grave', the late seventeenth century underground passages were placed into utilization when each of Paris' burial grounds began to flood and get stuffed. What were once digs extending for a significant distance under Paris, presently holds an expected 6,000,000 dead bodies all through its passages.

Expanding south from the Barrière d'Enfer ("Gate of Hell") previous city entryway, this ossuary was made as a component of the work to kill the city's spilling over graveyards. Planning work started not long after a 1774 series of Saint Innocents-burial ground quarter cellar divider breakdowns added a need to get a move on to the graveyard taking outmeasure, and from 1786, daily parades of covered carts moved from the greater part of Paris' graveyards to a mining tunnel opened close to the Rue de la Tombe-Issoire. 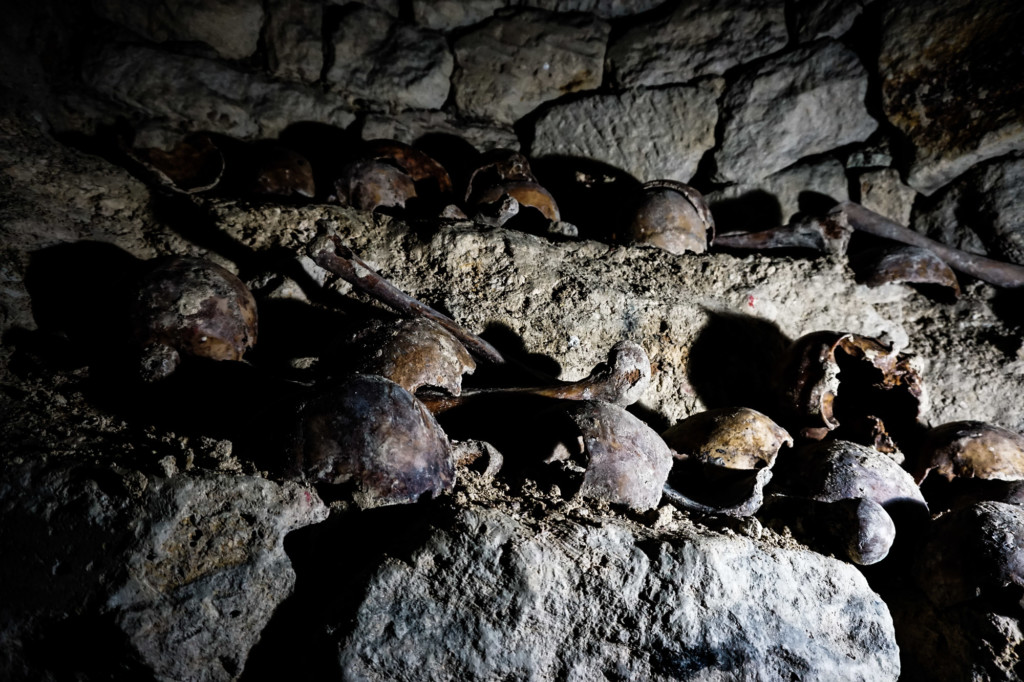 A close up shot of human skulls in Catacombs Of Paris

The ossuary remained to a great extent forgotten until it turned into an oddity place for shows and other private occasions in the mid-nineteenth century; after additional redesigns and the development of gets around Place Denfert-Rochereau, it was opened to a public appearance in 1874. Beginning around 2013, the Catacombs number among the fourteen City of Paris Museums overseen by Paris Musées. Albeit the ossuary involves just a little part of the underground "carrières de Paris" ("quarries of Paris"), Parisians presently frequently allude to the whole passage network as the mausoleums.

Paris' earliest cemeteries were toward the southern edges of the Roman-period Left Bank city. In ruins after the Western Roman Empire's fifth-century end and the following Frankish intrusions, Parisians ultimately deserted this settlement for the boggy Right Bank: from the fourth century, the principal known settlement there was on higher ground around a Saint-Etienne church and cemetery (behind the present Hôtel de Ville), and metropolitan extension on the Right Bank started decisively after other ministerial landowners filled in the marshlands from the late tenth century. Consequently, rather than covering its dead away from occupied regions not surprisingly, the Paris Right Bank settlement started with burial grounds close to its center.

The most focal of these graveyards, a cemetery around the fifth century Notre-Dame-des-Bois church, turned into the property of the Saint-Opportune ward after the first church was crushed by the ninth century Norman intrusions. At the point when it turned into its own area related to the congregation of the "Holy people Innocents" from 1130, this graveyard, filling the land between the current mourning Saint-Denis, regret de la Ferronnerie, regret de la Lingerie, and the lament Berger, had turned into the City's main burial ground. 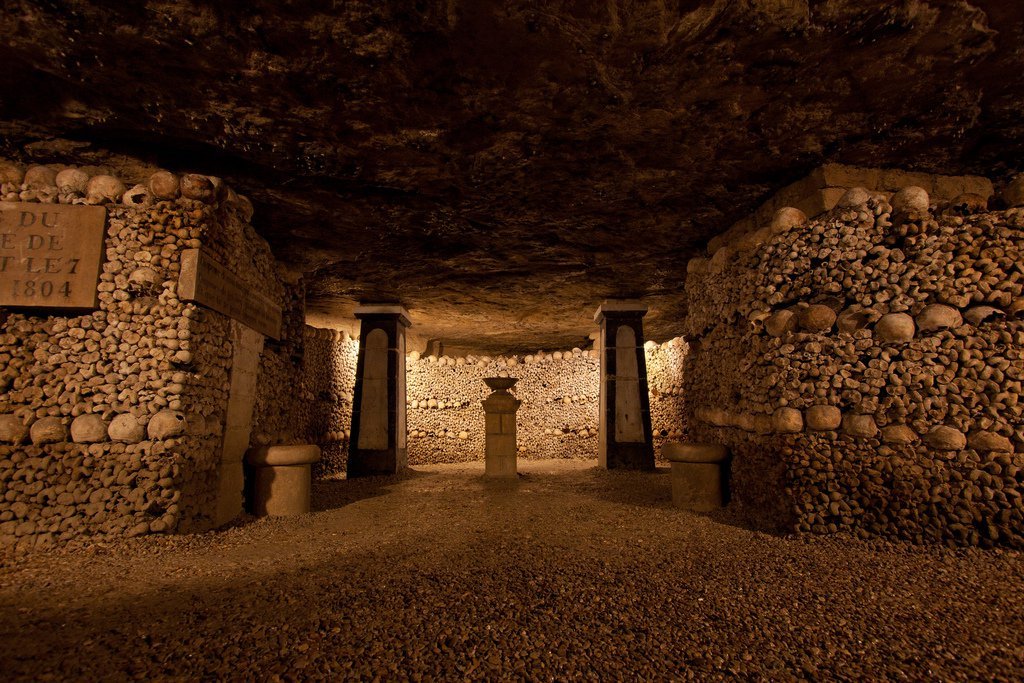 An inside view of catacombs of Paris

Before the finish of that very century "Holy people Innocents" was a neighbor to the vital Parisian commercial center Les Halles, and as of now filled to spilling over. To account for additional entombments, the long-dead were uncovered and their bones pressed into the rooftops, and dividers of "charnier" exhibitions worked inside the burial ground dividers. Before the finish of the eighteenth century, the focal graveyard was a two-meter-high (6.6 ft) hill of earth loaded up with hundreds of years of Parisian dead, in addition to the remaining parts from the Hôtel-Dieu medical clinic and the Morgue; other Parisian wards had their own cemetery, yet the circumstances in Les Innocents burial ground were the worst.

A progression of ineffectual declarations restricting the utilization of the graveyard did practically nothing to cure what is going on, and it was only after the late eighteenth century that it was chosen to make three new huge scope rural cemeteries on the edges of the city and to denounce all current ward burial grounds inside city limits.

A significant part of the Left Bank region settles upon rich Lutetian limestone stores. This stone constructed a significant part of the city, yet it was separated in rural areas from any residence. In light of the post-twelfth century heedless mining strategy of digging wells down to the store and extricating it on a level plane until consumption, a large number of these (frequently unlawful) mines were unknown, and when exhausted, frequently deserted and neglected. Paris had added its rural areas many times throughout the long term, and by the eighteenth century, a significant number of its arrondissements (managerial locale) were or included recently mined territories.

The sabotaged condition of the Left Bank was referred to by draftsmen as the mid-seventeenth-century development of the Val-de-Grâce medical clinic (the vast majority of its structure costs were because of its establishments), however, a progression of mine collapses starting in 1774 with the breakdown of a house along the "mourn d'Enfer" (close to the present intersection of the Avenue Denfert-Rochereau and the lane Saint-Michel) made King Louis XVI name a commission to explore the condition of the Parisian underground. This brought about the making of the investigation Générale des Carrières (Inspection of Mines) service.

As one visits the mausoleums, a sign above peruses Arrête! C'est ici l'empire de la Mort ("Stop! This is the realm of Death"). The Catacombs of Paris turned into an oddity for more special Parisians from their creation, an early guest being the Count of Artois (later Charles X of France) in 1787. Public visits started after its redesign into a legitimate ossuary and the 1814-1815 conflict.

First permitted a couple of times each year with the authorization of an approved mines examiner, yet later more every now and again and allowed by any mine manager, a progression of guests debased the ossuary to a place where the consent just rule was reestablished from 1830, and the sepulchers were shut totally from 1833 in view of chapel resistance to presenting human remaining parts to public showcase.

Open again for four visits every year from 1850, public interest made the public authority permit month to month visits from 1867, fortnightly visits on the first and third Saturday of every month from 1874 (with an additional opening for the November 1 Toussaint occasion), and a week after week visits during 1878, 1889 (the most guests yet that year) and 1900 World's Fair Expositions. Later they opened for customary day-to-day visits.

"They should rename it to the mildly prohibited catacombs almost"

"When you sit on your throne made of enemies bone they're still watching.

"I would like to live there. It’d suit my mood."

After an episode of defacing, the Catacombs were shut to people in general during September 2009 and resumed on 19 December the equivalent year. The Catacombs were returned to people in general on June 16, 2020, with new standards and rules for guests because of the COVID-19 pandemic. They have additionally taken on severe practices to screen swarm numbers and have made it mandatory to wear masks.

A weird yet nerve-wracking story of the Catacombs of Paris, just like the casa sayrach.