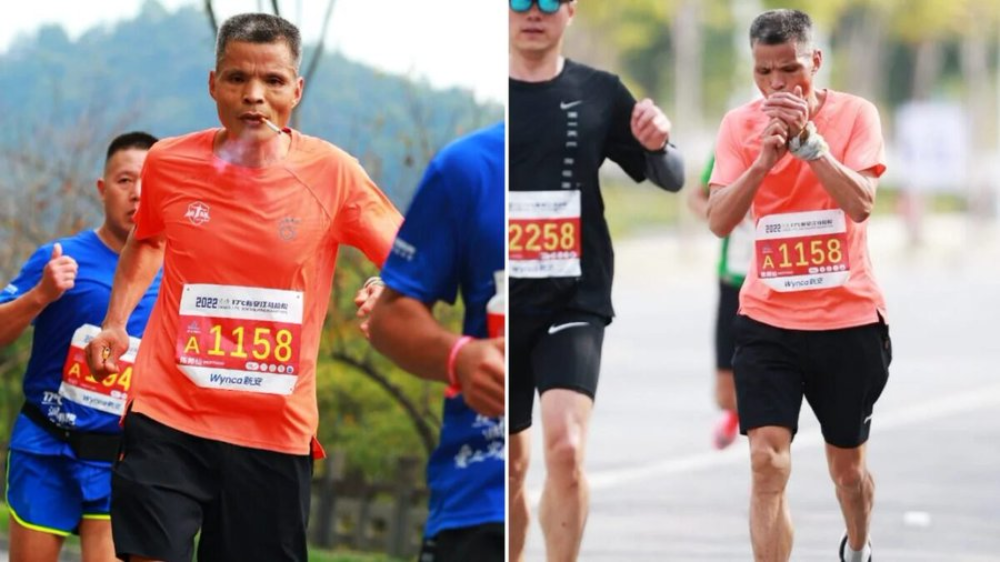 A chain smoking Chinese man completes 42 km marathon in 3.5 hours. Running a marathon is meant to encourage fitness and enhance general health. It takes dedication to training and a healthy lifestyle to complete a marathon.

Usually, marathon runners are unquestionably the athletes who are most concerned about their health. However, a Chinese runner who goes by the name "Uncle Chen" has gained notoriety for smoking cigarettes continuously while running a marathon, according to TMZ.

We can all agree that smoking cigarettes make it harder to run. And in Marathon, it becomes harder. Running becomes more challenging if you smoke because you get less oxygen into your heart, lungs, and muscles.

Nevertheless, on November 6, 2022, a 50-year-old chain smoking Chinese man completes 42 km marathon in 3.5 hours, according to a TMZ report.

Out of roughly 1500 runners that competed, he finished the marathon in three hours and 28 minutes, placing him 574th overall. All of this while smoking a pack of cigarettes nonstop.

According to the site, pictures of him originally went viral on the Chinese social media platform Weibo. The people who put on the event also noticed what he had done and gave him a certificate of completion.

Uncle Chen has already pulled off a similar bizarre prank. He was seen smoking multiple cigarettes while competing in the 2018 Guangzhou Marathon and the 2019 Xiamen Marathon.

Social media users have gone viral with images of Uncle Chen, denying the deed and expressing their disbelief. While some made jokes about it, others believed that such behavior set a poor example.

On Instagram, one user responded to the news by writing, "''Sadly this proves legit nothing. If he wouldn't smoke, he would've performed better and I'm sure he knows this.'' Another wrote, ''His lungs were literally screaming help.''

One Instagram user gave the Foo Fighters classic, "My Hero," their own unique spin by writing: "There goes my hero. Watch him as he smokes."

Another person said, "Imagine being stuck behind him the whole race," said another. "So this is what peak performance looks like," joked a third.

There are presently no regulations that forbid marathon competitors from smoking while they participate.

Who Is The Marathon Runner Who Was Smoking During The Race?

Uncle Chen from China is the marathon runner who was smoking during the race.

How Old Is The Chain-Smoker Marathon Runner From China?

Has Uncle Chen Appeared In Any Race Before?

A chain smoking Chinese man completes 42 km marathon in 3.5 hours. He gained the label "Smoking Brother" following an event in Hangzhou in 2017, and it appears that his smoking antics have even earned him the moniker "Smoking Brother" in running circles.