Why Is Chicago River Dyed Green On St. Patrick's Day? 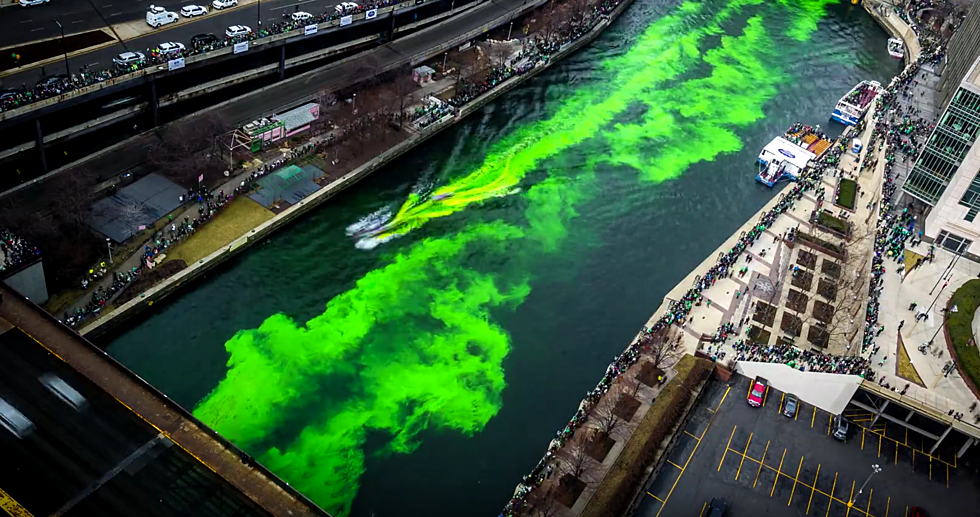 The Chicago River dyed green on St. Patrick's day tradition began in 1962, one year after Savannah, Georgia attempted but failed to dye their river green for the holiday.

When it comes to St. Patrick's Day, Mayor Richard J. Daley has urged that the city find a means to make Lake Michigan green.

According to the Chicago Tribune, Stephen M. Baily, the business manager of the Chicago Plumbers Union, came up with the concept of coloring the river with a solution that was used for identifying pollution but had the unintended side effect of generating green streaks as well.

It Is Customary To Dye Chicago River Green

100 pounds of oil-based fluorescein were dumped into the river during the first several years of the event, which turned the water green for nearly a week. 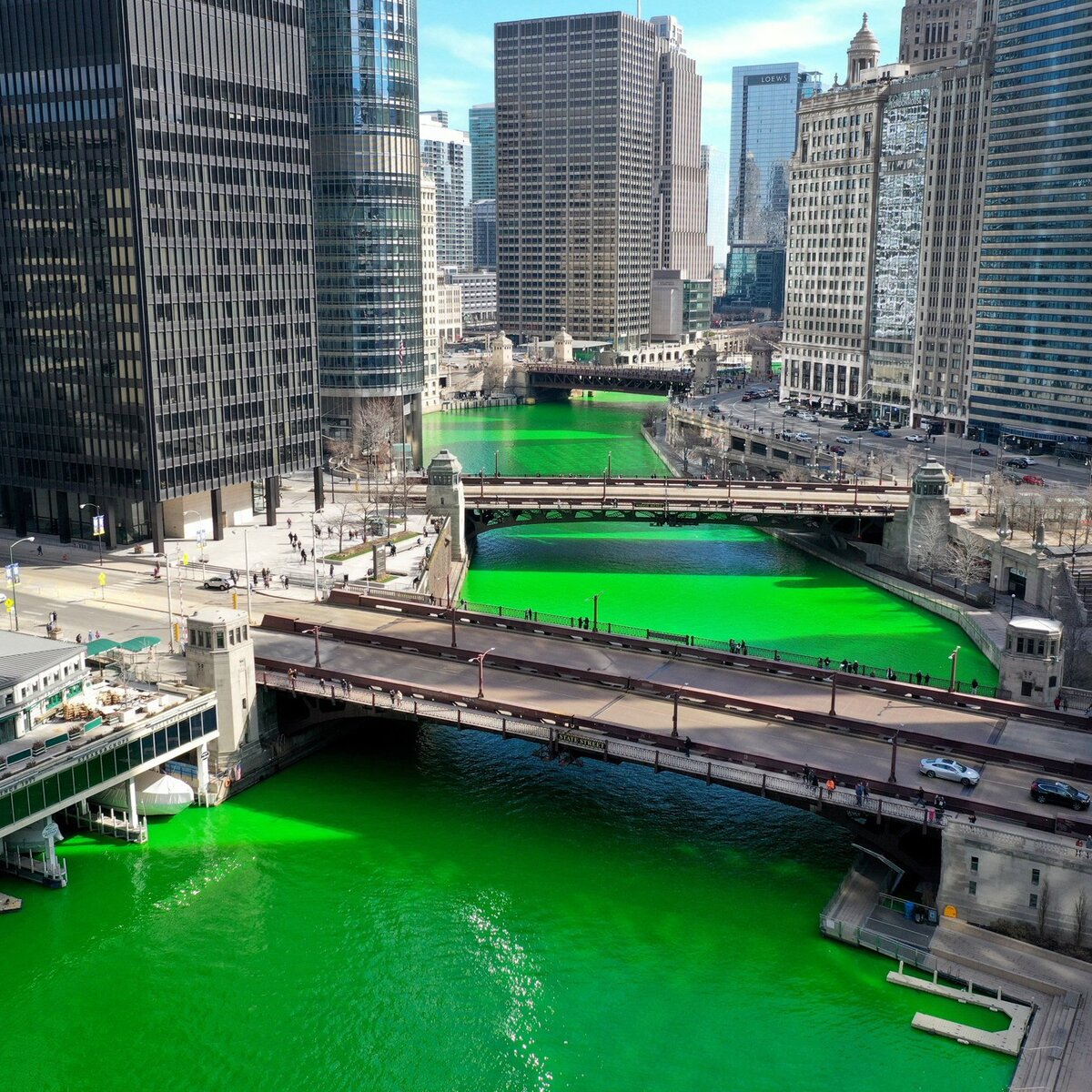 In honor of St. Patrick's Day, the Chicago River has been dyed a vibrant shade of green, this time in the hue of Flubber.

It is dyed this vibrant color every Saturday before St. Patrick's Day, which is celebrated on March 17th, save for the two years when the pandemic struck. The river is colored in honor of the city's Irish heritage.

However, seventy years after the practice was established by Chicago's plumbers, environmental organizations are growing concerned about the river's future.

It has been a long-standing campaigning goal for Friends of the Chicago River, which has long advocated for an end to the practice of dyeing the river.“Dyeing the river perpetuates the notion that it can be treated any way anyone wants, rather than protected as a valuable natural resource,” says Margaret Frisbie, executive director of the group.

Is It Safe To Dye The Chicago River Green?

So, how did this eye-catching festival come to be, and - as bystanders have wondered year after year - is there a monetary cost in terms of the environment of Chicago River dyed green on St. Patrick's day tradition?

According to Mental Floss, after some environmental criticism, the parade organizers shifted to using only 25 pounds of a more eco-friendly vegetable-based powder (the recipe is a closely guarded secret), which appears amusingly orange until it touches the water.

The river remains green for most of the day as a result of this.

A pair of tiny motorboats can color the river in a matter of minutes, as they swing back and forth between Wabash Avenue and Columbus Drive.

The largest of the two ships has a crew of four people who use flour sifters to dump the powder into the water.

The smaller boat, which transports only two persons, contributes to the dispersion of the powder.

Once the green color has reached its maximum brilliance, it takes 45 minutes to complete the process. 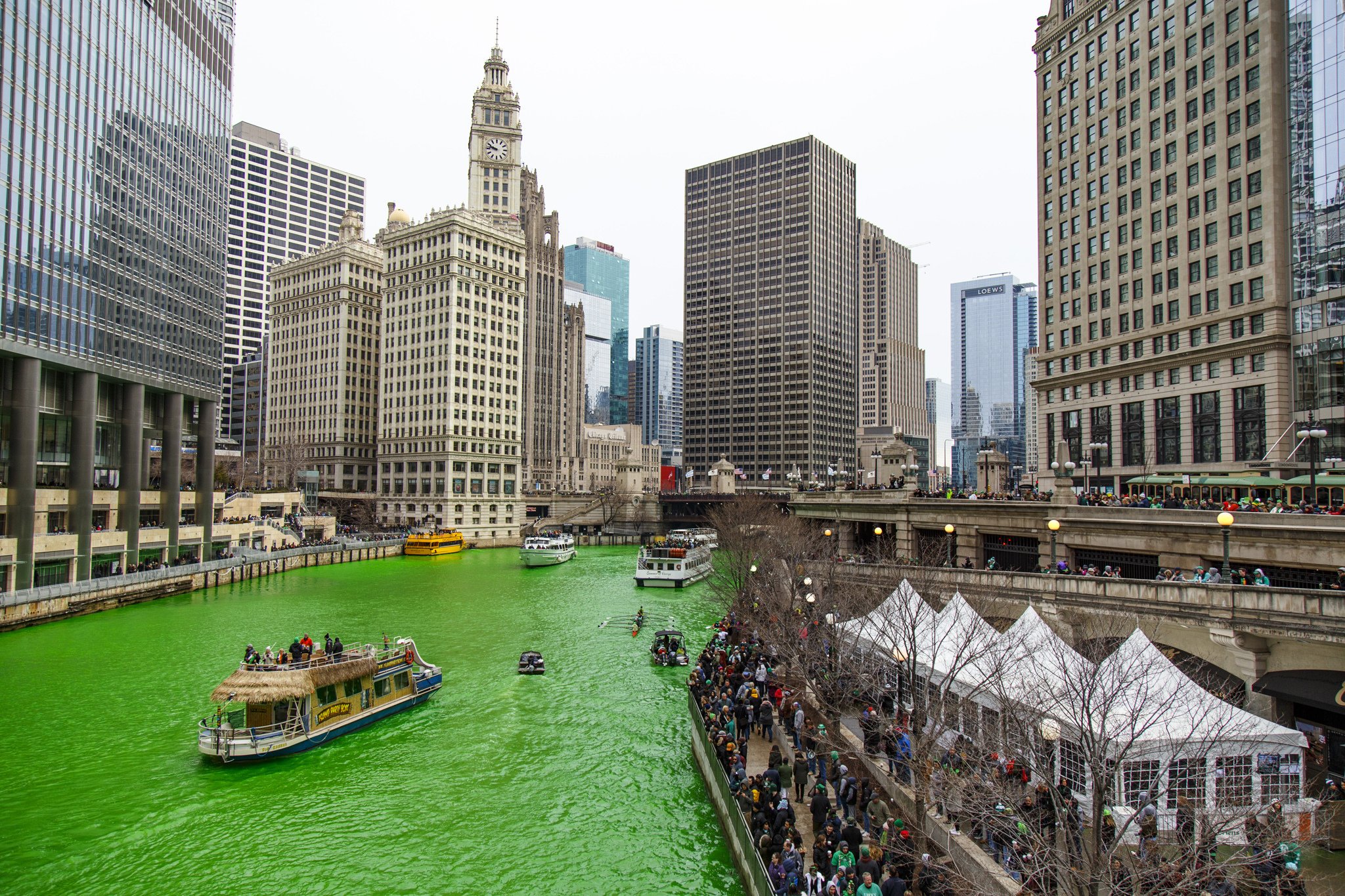 A boat on green-colored water of Chicago river

What Is The Reason For Chicago's River Being Dyed Green?

The process of turning the Chicago River green is closely linked to pollution.

With the election of Richard J. Daley as Mayor of Chicago in 1955, he set out to clean up the city's riverside region, beginning with the sewage-strewn Chicago River.

As a test, he hired local plumbers to inject an orange mixture into people's water pipes in order to figure out where the trash was coming from.

After coming into touch with sewage, the solution transformed into an intensely vivid green.

According to reports, Stephen Bailey, a representative of the Journeymen Plumbers Local union in Chicago, was inspired to increase the discoloration after seeing a colleague's green-soaked overalls one day.

As co-chair of the parade (which has been an annual event in Chicago since the 1950s), he was responsible for the first time that a section of the river was colored green.

A total of 100 pounds of the chemical was put into the tank, which turned it a fluorescent green for the next week.

It took several years to refine the ratio to the point where it would only persist for a single day.

Despite the fact that images posted on social media today show the river still looking green following its Saturday adornment, the river itself is not green.

"The Chicago river is not clean but it is surprising not that bad because it is all fresh water from Lake Michigan. If it wasn't for fairly rare sewage overflows during bad storms it would actually be pretty clean at least through downtown."

"The river is much cleaner than it used to be. You can fish in it and the fish are safe to eat. There are river otters now too."

A Video on Reddit about this tradition shows a timelapse video of two or more boats dying the Chicago River green.

Is It Detrimental To The River's Wildlife?

An oil-based fluorescein was employed as the first dye, and it is still routinely used to identify leaks today.

It was only in 1966, when environmentalists successfully argued that it was ecotoxic and may be causing even greater damage to the river, that the dye was replaced with a powdered, vegetable-based colour.

“Illinois EPA has never required a National Pollutant Discharge Elimination System (NPDES) permit so there is no way to know what the dye is or whether it is harmless,” Ms Frisbie explains.

However, the fundamental reason for the Friends' opposition is that the river and its residents are being disrespected.

They claim that the water has improved significantly since the heavily polluted 1960s.

“Imagine fish, beavers or otters swimming through that dyed-green water and you might think a new celebration is the right idea.”

Although significant progress has been made, there is still much more work to be done.

“If you know anything about the Chicago River, you know that river is polluted,” says Shermann Dilla Thomas, a Chicago historian, in a video posted to Twitter.

Moreover, conservation officers are on the lookout for unlawful dyeing, which occurred in 2020 and 2021 while the march was cancelled owing to Covid crowd control measures in place.

Whoever the perpetrators are, Frisbie asserts that “their idea of fun is ecologically harmful and against the law."

How Long Does The Chicago River Stay Dyed Green?

About 40 pounds of dye, termed "Leprechaun Dust," is released by a number of tiny boats, which keeps the water colorant fresh for up to 48 hours. It has been two Chicago families for the past half-century, the Rowans, and the Butlers, who have been in charge of continuing the tradition.

So what extent do you like the emerald green color of the river? What are your thoughts on the Chicago River dyed green on St. Patrick's day tradition? Do let us know in the comment section below