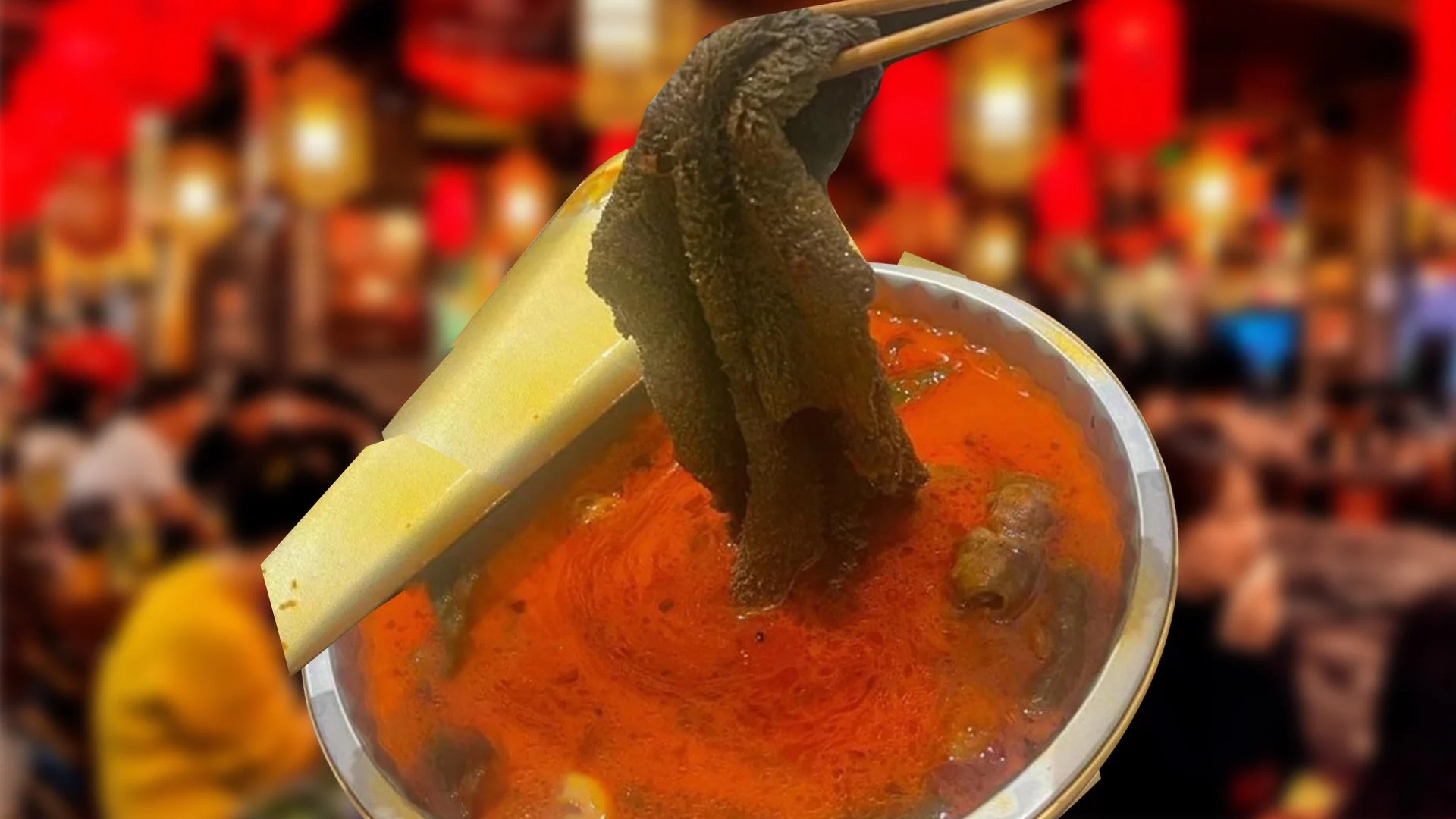 A Chinese man finds used dishcloth in his hotpot while eating with his colleagues. After discovering a dirty dishcloth in the takeout hotpot he ordered for a Wednesday (Dec 28, 2022) lunch with his coworkers, a man in China is requesting a government probe.

He told that he was surprised to see a large piece of dark cloth while eating at the Shao Hotpot chain restaurant in Chengdu, Sichuan province, in southwest China.

Ning said that at first, they thought it was a big piece of beef tripe, which is often found in Sichuan hotpot.

As we were enjoying it, I suddenly found a piece of beef tripe. I said, ‘Maybe we should cut it into smaller pieces’. Then we realised something was wrong. Two female colleagues began throwing up immediately.

Last Thursday (Dec 29, 2022), a manager at Shao Hotpot who didn't want to be named told the South China Morning Post over the phone that the problem was caused by a careless mistake made by a younger worker who was sick at the time.

"He is only 19 years old and only just started working. He had a mild fever while preparing the dish," she said. "We have fired him but will pay him for his work. We have closed the store for rectification and are talking with the customer about monetary compensation," she added.

Ning claimed to have purchased two hotpots for himself and five coworkers who were putting in extra hours for 213 yuan ($30.50). He claimed that when he first noticed the two soups were different colors, he was initially hesitant to begin eating.

We started eating anyway as I thought it was wrongly made with tomato soup. Later, when I called the restaurant, they admitted it was a dishcloth that had accidentally fallen into the pot.

A Chinese man finds used dishcloth in his hotpot while eating with his colleagues and after that, he even turned down the restaurant's offer of reimbursement in the amount of three times the tab.

He remarked, "My only demand is that the government intervene and investigate," he said. Last Thursday (Dec 29, 2022), calls to the Chengdu Food and Drug Administration went unanswered.

Even though there are often worries about food safety and hygiene in the country, Ning's story has shocked many mainland Chinese internet users. According to a user's comment, "This is a suspenseful horror movie."

One of the worst examples included pickled cabbage, a popular Chinese component used with instant noodles that gained notoriety among customers when a state television show in March disclosed how it was made.

The act of employees stepping barefoot or in slippers on the vegetables was caught on camera. Some of them were smoking, and one was seen on camera chucking his cigarette right into the cabbage.

Fake and toxic foods proliferate in China/Food safety issues are shocking, and everyone gets hurt

It is challenging to determine the true scope of China's food safety issues since the government has incentives to conceal or minimize issues with social and political stability.

Prior to the crisis involving poisoned infant formula, an assessment from 2007 predicted that 300 million Chinese people might experience foodborne illness each year. Consuming food contaminated with toxins, pathogenic bacteria, viruses, or parasites can cause a foodborne illness.

While it is relatively simple to link a health issue (such as acute diarrhea) to infections brought on by consuming contaminated food or water, chronic health conditions (such as cancer) brought on by food tainted with toxic chemicals are unlikely to be included in annual statistics, even though illegal food additives or noxious substances in food are becoming a significant health hazard in China.

According to a 2011 study, bacterial foodborne illnesses alone cause more than 94 million illnesses per year, 3.4 million hospitalizations, and more than 8,500 fatalities.

In contrast, foodborne bacteria, viruses, and microorganisms collectively result in 48 million illnesses among Americans each year, 128,000 hospitalizations, and 3,000 fatalities.

An official says that China, which has been hit by a number of food safety scandals recently, found as many as 500,000 illegal violations of food safety laws in the first three quarters of the year 2016.

In recent years, Chinese officials have found a number of food safety problems, such as the sale of baby formula in 2008 that contained levels of the industrial chemical melamine that were lethal, rice that was contaminated with heavy metals, and restaurants that used recycled "gutter oil."

Bi Jingquan, the head of the China Food and Drug Administration, told the Standing Committee of the National People's Congress that the food industry has made a lot of progress, but there are still "deep-seated" problems.

There is a transcript of Bi's report that states that in the first three quarters of the year, Chinese food safety departments conducted more than 15 million individual inspections and discovered more than 500,000 instances of illegal behavior.

False advertising, the use of knockoff goods and ingredients, and the sale of tainted food products were among the offenses.

Is Food Poisoning Common In China?

Yes, the prevalence of food poisoning is very high, and cancer incidence is increasing in China. Three people under the age of 40 that I directly know have liver or renal failure. One of the most prevalent cancers in China is gastrointestinal cancer. Most people think this is inevitable and a result of eating unclean food.

Does China Have A Food Problem?

China is responsible for feeding around one-fifth of the world's population, although it only has about 7% of the world's arable land. Beijing established a "red line" to set aside at least 120 million hectares of fertile land for agricultural purposes sixteen years ago.

What Food Poisoning Can You Get From Chinese Food?

Chinese cuisine carries the risk of food poisoning. The term "Chinese Restaurant Syndrome" was once used to refer to MSG-related symptoms brought on by eating Chinese food. It is debatable if MSG causes disease, yet a lot of high-risk components, like rice, chicken, and shellfish, are utilized in Chinese cuisine.

What Foods To Avoid That Come From China?

A black dishcloth was discovered in a hot pot that was purchased from a Chinese restaurant.

A Chinese man finds used dishcloth in his hotpot while eating with his colleagues, according to a story in Hong Kong's South China Morning Post (SCMP), and he asked that the restaurant and the police look into the matter.

SCMP claims that on December 28 of last year, a Ning office worker placed an order for a hot pot at the Chengdu, Sichuan Province, chain restaurant Xiao Hot Pot. However, he picked up a sizable black object while eating hot pot with his coworkers.