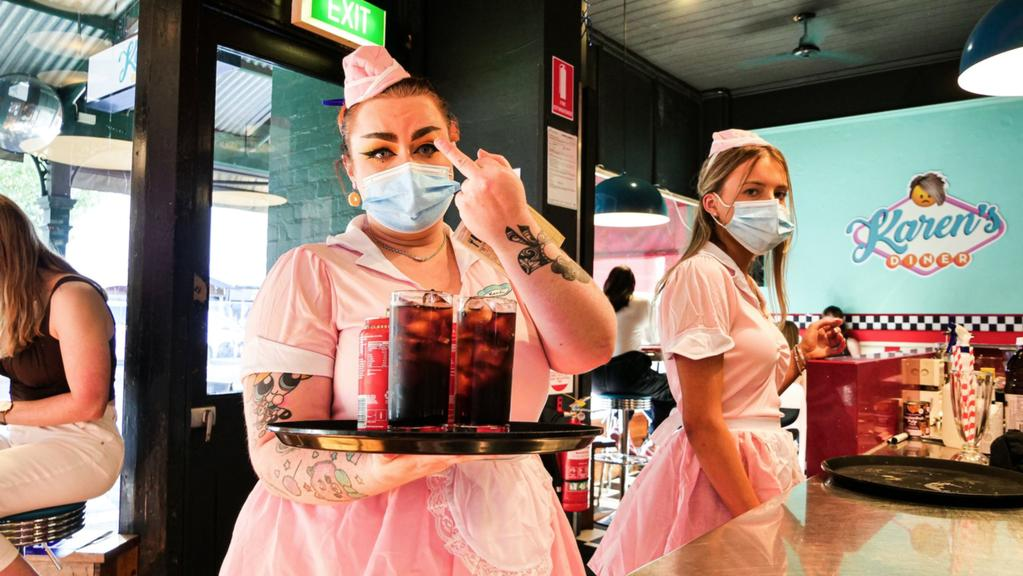 Don't try to go to Karen's Diner if you have trouble keeping your temper under control. This particular restaurant is known for deliberately unpleasant dining experiences. Recently, the crew of Karen's Diner eats and touches customers' food went viral.

Customers accused the restaurant chain, known for its rude service, of "going too far" after touching one of their foods. The restaurant, which has locations in Australia, New Zealand, and the United Kingdom, offers fantastic burgers and "rude service," in which employees say whatever they want to clients, with funny outcomes.

One video from an Australian branch has gone viral after a worker touched some of a customer's food before eating it themselves. You can find the cringe-worthy video online. In the video, you can see an employee bring three baskets of food, including burgers, chips, and onion rings, to the table.

Then they gave the customers two middle fingers, grabbed an onion ring, dipped it in sauce, and ate it while walking away. The customer shared their experience on social media, such as TikTok, and they said:

This is how they served our food to us at Karen's Diner. After a one hour wait for food the rude waiter threw it on the table and started eating our onion rings. While many thought it was hilarious, others thought it was a step 'too far.'

One comment reads: "Touching my food taking it too far even with the theme." Another person said, "No, why would you touch someone else's food? It's not clean, tbh."

And a third person said:

Look I love the whole vibe I feel like it's be fun, but the second you touch my food it's over.

I can deal with rude but putting your hands in someone’s food is literally disgusting. Servers touch money, food, rags. Etc. no way.

Others, though, said that was the point of the restaurant. One person said, "The whole point is for them to be rude to their customers lol." Here is one of the videos uploaded online showing rude vibes in Karen's restaurant.

Inside Karen's Diner - The Rudest Restaurant Ever 🤬🤯 | UNILAD Adventure

Because of the staff's harsh attitude toward their customers, many are amused by their approaches and mood. Here are some of the comments from the video:

One YouTube user said: "There is some pure honesty on this restaurant. I would love to pay a visit and taste all the good-looking junk food they got!"

Such a cool place where to release some steam and deal with hunger and nobody gets ofended. This is very rare in this world full of fake kindness and ofended people. I would love to visit it at least once a week.

If you've ever worked in customer service, you know how hard it can be to always look happy for customers. That doesn't matter at Karen's Diner. The Australian chain of burger places tells its employees to be rude. The website says that the idea is "great burgers and rude service."

Since the first Karen's opened in Sydney in October, videos of servers swearing and yelling at customers have gotten millions of views on TikTok. A spokesperson for Karen's Diner said that the chain has nine locations in Australia and that four more will open in August.

Karen's Diner's menu includes beef and chicken burgers, chicken wings, desserts, and beverages. While the service is notoriously terrible, the restaurant prides itself on its high-quality food, with beef burgers and wings being the most popular meals.

According to the 24-year-old senior venue manager of the Sheffield location, if your name is Karen and you visit the restaurant, you will be entitled to a free drink. The manager went on to say:

I think everyone's at that point now where if you see a phone, you just automatically don't even look at it anymore. You just get on with it. It is strange afterwards, being tagged by your friends and your family and sent videos of you on a TikTok shouting at someone's grandma.

Karen's Diner has been contacted by media outlets like LadBible for feedback. However, they assured us that the chain is not completely lawless, and that all employees go through two weeks of training to familiarize themselves with the rules. As well as describing the responsibilities of hosts and section waiters, the service manual also includes information on how to capture "Karen's mood."

Staff members are expected to know and abide by certain "house rules" on appropriate levels of humor and banter, the violation of which may result in termination. No discrimination on the basis of race, gender, sexual orientation, disability, or weight will be tolerated.