A Costco customer refused to wear her face mask – despite having one on her person – when asked to by staff.

This woman who refused to wear her mask in Costco shouted that it was against her constitutional rights to be made to wear it, despite her being in private property.

That’s genuinely like jumping through a window into someone’s house, punching them, and when they tell you to get out, you go ‘I thought this was a free country?!‘

A very patient employee pleaded at the woman to put her mask on, saying:

The woman replies: “I am not a member of Costco,” which I don’t see the point in saying.

Karen being Karen… hats off to these Costco employees 👏👏👏, first they had to deal with toilet paper bandits now…

“Want me to get that taken care of for you? Well then, you’re going to have to put your mask on“.

The woman refuses and does the classic move of asking to talk to the employee’s manager, before she’s met by her saying:

“He’s gonna require the same. If you want to step outside here I’ll have him come meet you outside. You need to do that it’s our policy. We’re going to walk outside“. 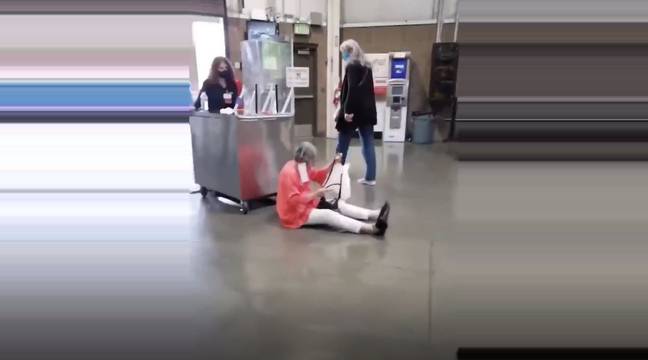 Instead of going outside, the woman then sits on the floor, like a child, as the employee asks:

“Can I get you a chair outside? There’s a place to sit. Want me to help you up?“

The manager does eventually turn up, which is when the woman pulls her ace card and yells:

“I’m not leaving. Do you want to carry me? I am an American. I have constitutional rights!“

The video ends after that and it’s unclear what happened next, but I’m sure it all ended happily and they went to get… gelato?