Cyclops - The Mystery Of One-Eyed Giant And Pygmy Elephants 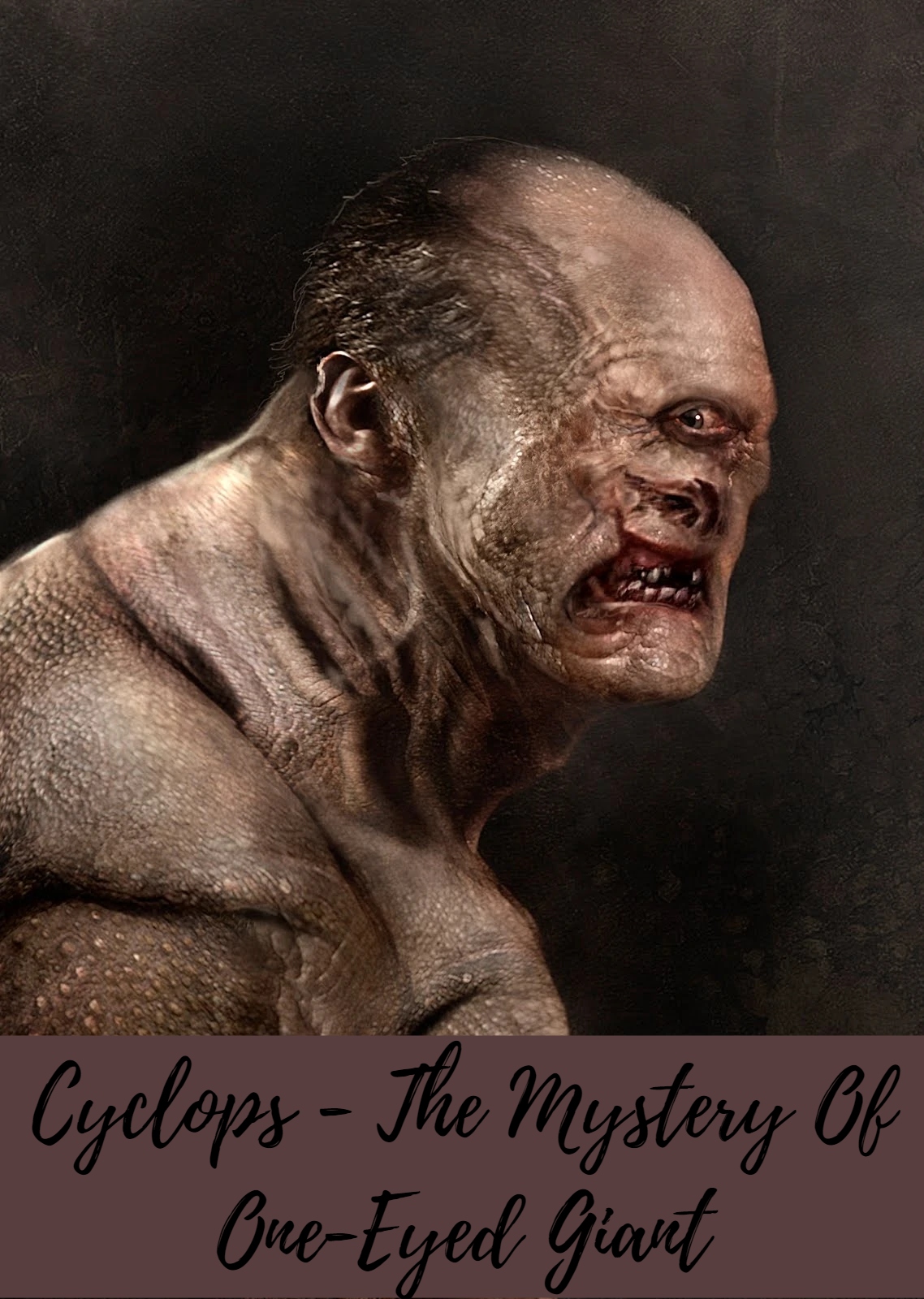 Have you ever pondered the origin of the most terrifying giant in your nightmares? It's possible that the gigantic fossils of extinct animals served as inspiration for the ancient Greeks to think about cyclops.

On the island of Crete in the Greek archipelago, archaeologists have discovered the tusk, numerous teeth, and some bones of a Deinotherium giganteum, which, in a broad translation, means "very enormous horrible beast." 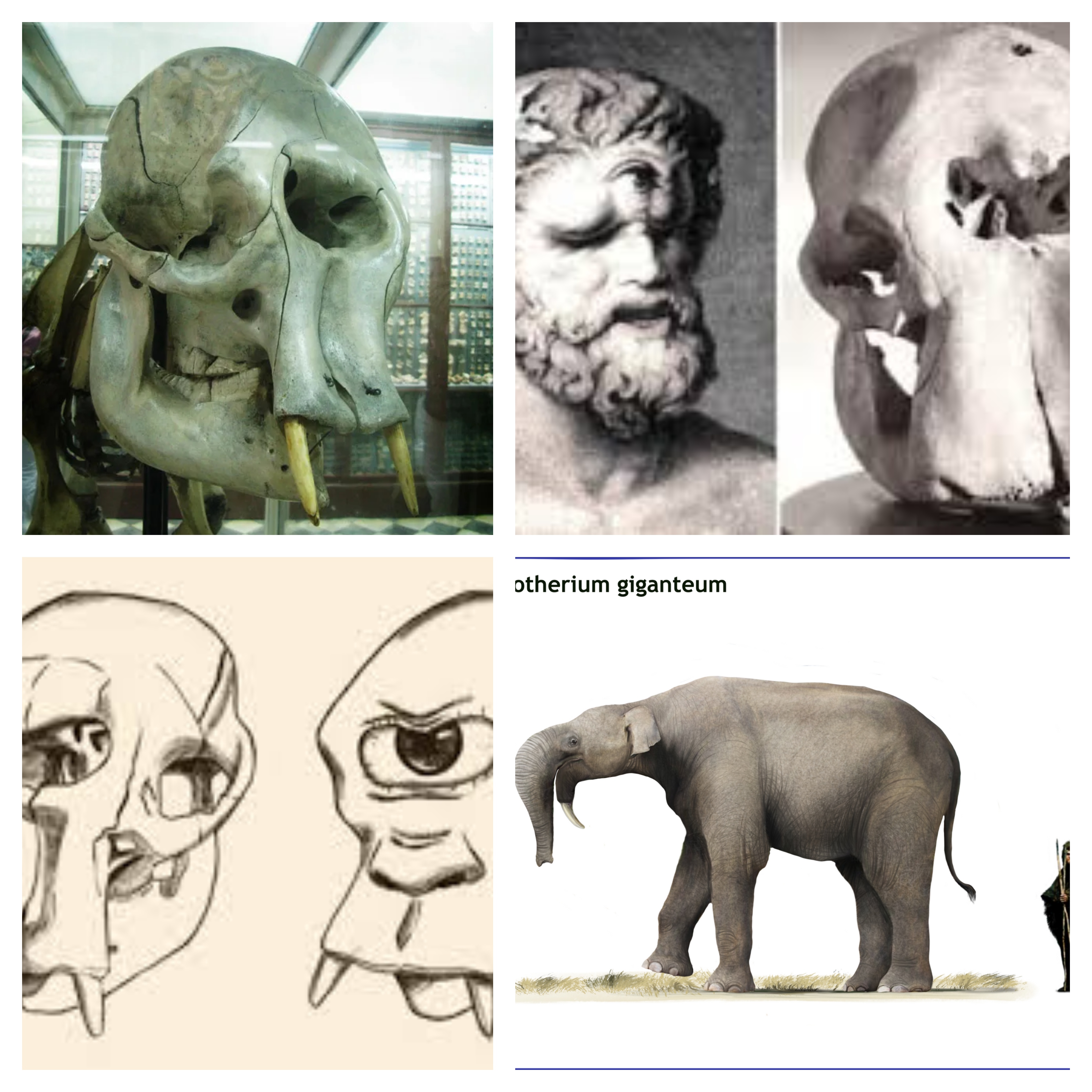 The enormous beast, which was a distant ancestor of elephants living today, stood 15 feet (4.6 meters) tall at the shoulder, and each of its tusks was 4.5 feet (1.3 meters) in length.

It was among the most massive animals that have ever walked the surface of the Earth.

Skulls of Deinotherium giganteum or dwarf elephant skull discovered at other sites demonstrate that this extinct elephant had a more primitive appearance and a bulk that was far greater than that of today's elephant.

The elephant had an exceptionally big nasal aperture in the center of its head.

The big hole in the middle of the skull gives paleontologists the impression that the individual had a prominent trunk.

The stories that the ancient Greeks told about the terrifying one-eyed Cyclops may have been inspired, at least in part, by Deinotherium skulls.

The Mystery Of Cyclops

Whether they were aware of cyclops or not, people throughout human history have been exploring new locations and applying the scientific method in an effort to explain what they discovered and how it relates to their worldview.

As a result, we are going to investigate why some of the fossils of elephants that people encountered were thought to be representations of mythical animals, cyclops.

Cyclops is featured prominently in both Greek and Roman mythology. 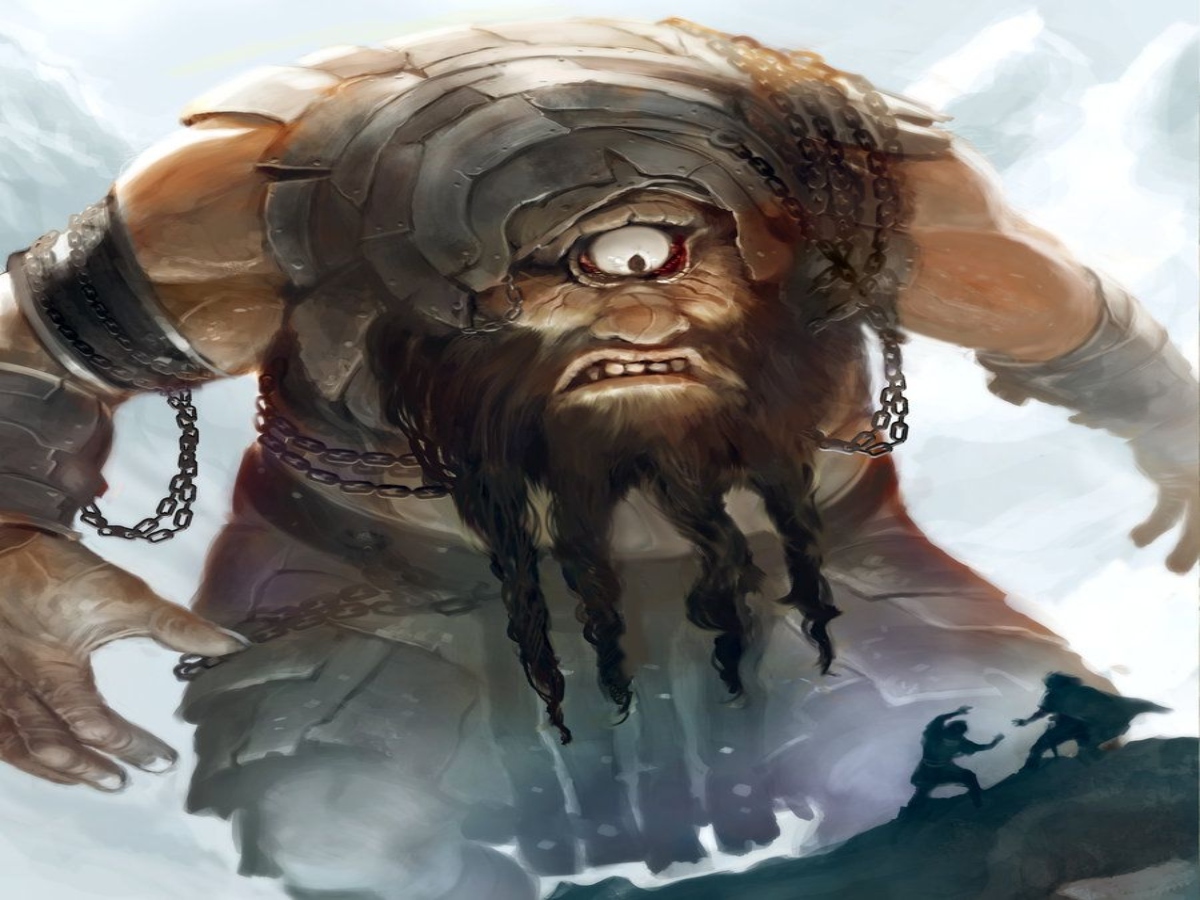 Cyclops were monstrous, one-eyed giants with the appearance of humans who featured prominently in Greek and Roman mythology.

When Cyclops was first brought into the world, the Titans abandoned him in the sea, and it was Zeus who eventually rescued him.

It is supposed that the original blacksmiths were the Cyclopean storm gods Arges (thunderbolt), Steropes (lightning), and Brontes (thunder)

They were incarcerated by Zeus, but he eventually set them free so that they might fight for him against the Titans.

The Cyclops presented Zeus with his lightning and thunder weapons as a thank-you gift for releasing them from their imprisonment.

It was also stated that they were responsible for the creation of Poseidon's trident and the invisible helmet that Hades wore.

The Cyclops were the gods' blacksmiths, and they did their work in the caves on Mount Etna in Sicily. Etna is located in Italy. This helped provide an explanation for why Mount Etna produced volcanic eruptions that included fire, ash, and rocks.

Hephaestus, the Greek deity of fire, employed the Cyclops in his service (Vulcan, in Roman mythology).

The story of Odysseus and his men discovering food in a cave on their way back from the Trojan War is one of the most famous Greek myths. 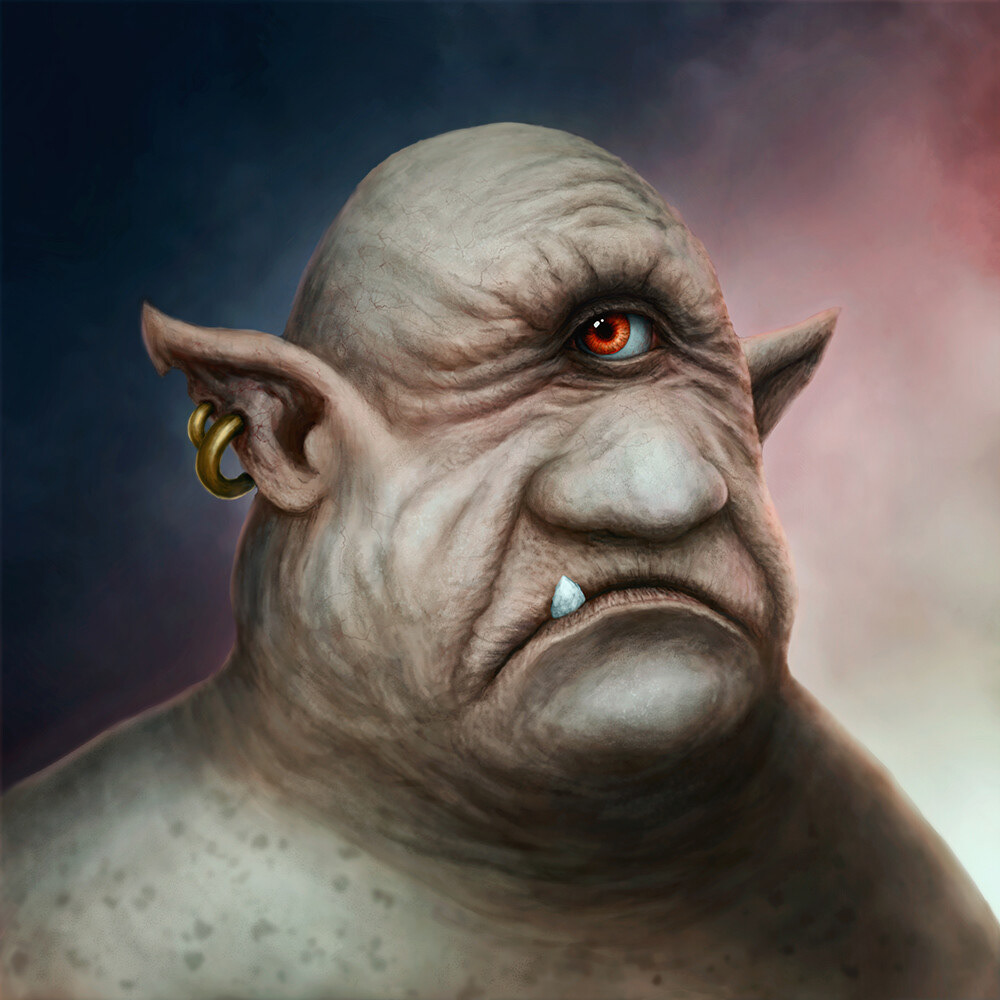 Homer told this story in both The Odyssey and The Iliad. At the same time that they were contentedly filling their stomachs, the man-eating cyclops Polyphemus returned to his cave and began filling his stomach - with the intruders!

Odysseus responded, "No One," when Polyphemus asked him his name during the Odyssey. In the later hours of the same day, Odysseus and the rest of the crew drove a stake through Polyphemus' eye.

He started yelling, "Help! "No One is coming after me!" Because of this, the other cyclops that resided in the area were perplexed, so they did not react. The remaining members of the crew were able to finally get away by tying themselves to the stomachs of Polyphemus' sheep.

The story of the Mediterranean islands' dwarf elephants is equally captivating.

During the Pleistocene ice ages (2.6 million to 11,700 years ago), glacial cycles caused the sea level to rise and fall, creating land bridges that allowed large, straight-tusked elephants to walk or swim to nearby emergent islands around the Mediterranean to escape predators or find food for their 200-kg-per-day appetites.

The elephants were overstressed by food resources as sea levels isolated the several islands, so they responded by reducing in size, generation by generation.

When a population's food resources are low and extinction is a genuine possibility, this dwarfing, known as island rule, improves a species' chances of survival.

Some dwarf species stood little more than 3 feet tall and weighed no more than 250 pounds.

Dwarf elephants have also evolved in Japan's islands and off the coast of California's Channel Islands.

Due to the lack of predators on many Mediterranean islands, the little elephants were able to survive in groups on islands such as Sicily.

The elephants were easily slaughtered and became extinct within a century after the first humans arrived on the island.

The skeletons of dwarf elephants were discovered in caverns and other sites by early Greek sailors exploring the Mediterranean Ocean's islands.

They didn't recognize the bones for what they were since elephants were extinct on the European Continent at the time.

Using what they knew and attempting to figure out where the bones ended up, the formidable Cyclops was conceived.

They may have even put the skeletons together in the shape of a human, believing that was the proper position.

After they were discovered in caves near Mt. Etna, the tale of the Cyclops was created to explain where these unusual animals came from, what they did, and how they were Vulcan's servants.

v13ragnarok7 on Reddit shared information, "Wow. So I was wondering what the big "eyesocket" is for. Googled pygmy elephant, and now I feel like an idiot. Of course its for the trunk. Of course, the giant suction flesh tube needs to attach to a large orifice..."

Some people think Cyclops were misinterpreted by the Greeks and some think they were for real. Well, God only knows. Maybe, time will answer the question. So, WAIT!!!

What Is Cyclops Famous For?

Polyphemus is the most renowned cyclops, having caught Odysseus and his crew only for them to escape by blinding the wretched giant. In all kinds of Greek and Roman art, Cyclopes, and particularly the Odysseus myth, were popular and enduring topics.

Why Does The Cyclops Have One Eye?

According to legend, the Cyclopes were born with only one eye after striking a bargain with Hades, the god of the underworld, in which they exchanged one eye for the ability to see into the future and predict their own deaths.

The finding of petrified pygmy elephant skulls, according to Abel, inspired the Cyclops' story. The eyes on such skulls aren't very visible, yet the trunk leaves a wide 'nasal cavity' in the middle of the head - the Cyclop's 'eye'.

Well, the Cyclops are really terrifying. It looks like they have come from another world to fulfill their responsibility of killing every human they find. LOL!!!

What do you think? Do you believe in this myth or this TRUTH???