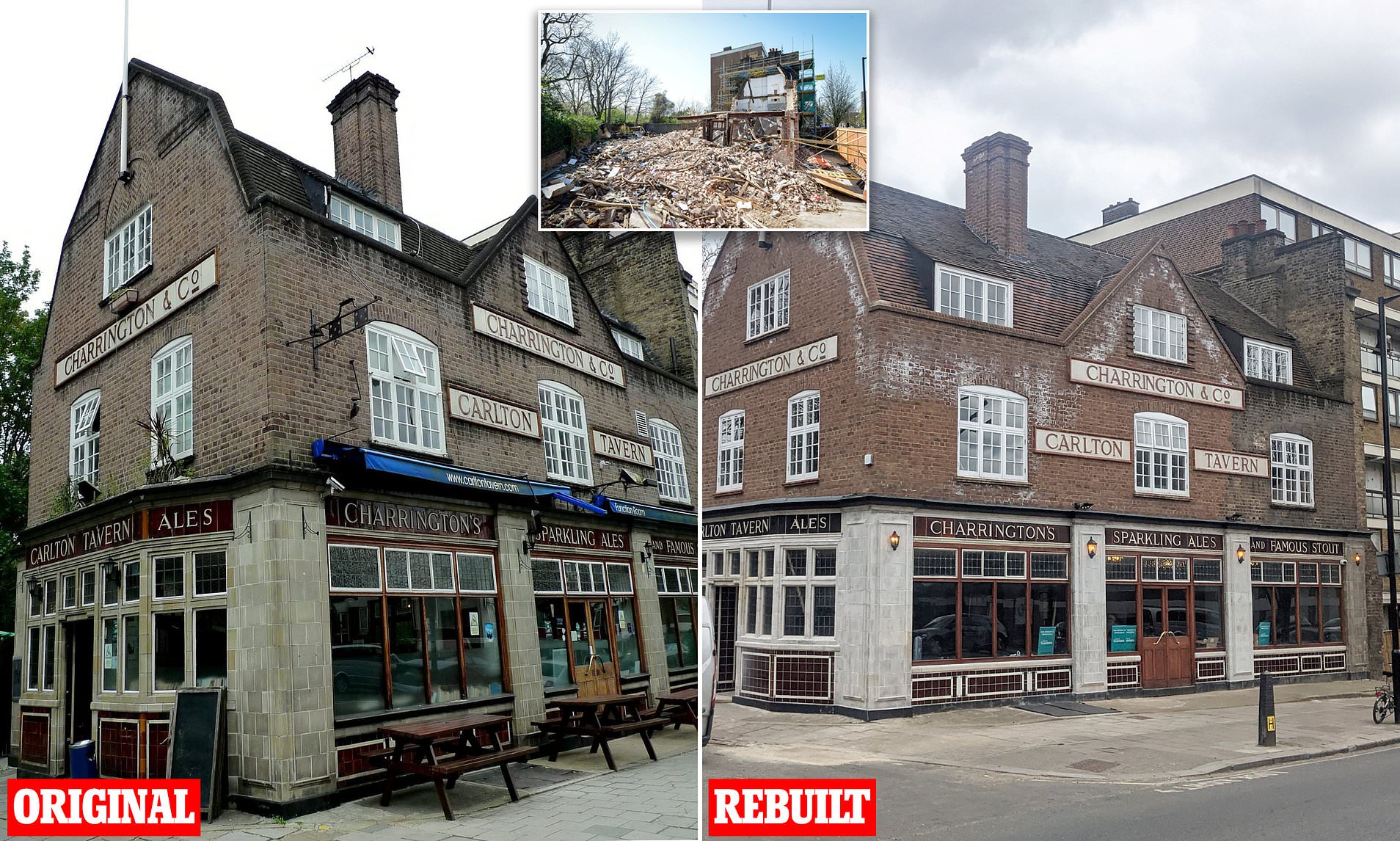 Developers rebuilt the Carlton Tavern London as it was illegally demolished in 2015. Yes, you got it right. I am not kidding. Let me share with you the backstory.

The customers of the Carlton Tavern, who were standing close to the ruins of the building, believed that this was just another brazen example of developers breaking the law to turn their tavern into a profitable enterprise. 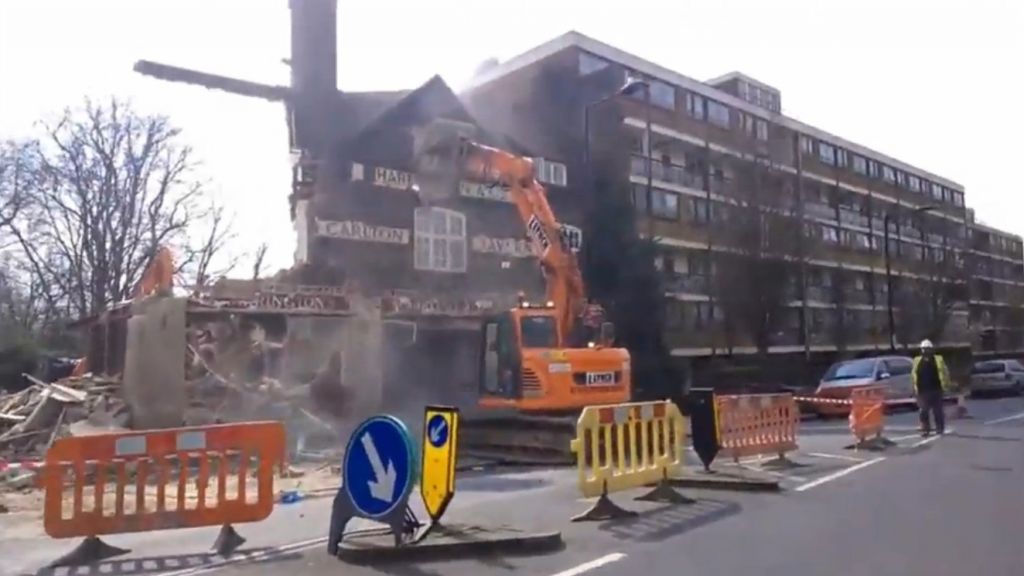 London Pub Knocked Down And Rebuilt

The wall of the 1920s pub in west London had been ripped down by bulldozers, exposing the fully stocked bar as well as the darts trophies that were still on display.

The tavern's characteristic tiled signage had been intact.

However, the plot of Carlton's story did not follow the typical pattern, in which the developer reveals the completed project to the local government and pays a fine before continuing with the reconstruction and tallying their gains.

This was not the case with Carlton Tavern.

Instead, after a persistent six-year fight by locals, the Carlton Tavern reopened in 2021.

How?? Developers rebuilt the Carlton Tavern London as it was illegally demolished in 2015 as instructed by the court.

This comes after the developers were forced to repair the pub "brick by brick," a judgment that pub advocates claim has set an exceptional precedent.

People said it was impossible, many people said, ‘Polly, it’s not worth it, nothing’s going to happen’. And I just thought, no – I’m not going to let it lie.

This is according to Polly Robertson, a leading member of the Rebuild the Carlton Tavern campaign.

The reopening took place on April 12th, 2021 which is also the day the limitations imposed by Covid-19 were scheduled to be lifted throughout England, allowing pubs and restaurants to once again offer beverages and meals outside.

There are 33,305 pubs in England, and none of them celebrated that day more enthusiastically than the Carlton in Maida Vale.

April 2015 was the month that the Carlton Tavern served its final customers before demolition.

The owners decided to demolish the building after they were denied permission to convert it into ten apartments and only two days before Historic England was scheduled to make a recommendation regarding the pub's eligibility for Grade-II listed status.

More than 5,000 local residents, including numerous local councilors and Robertson, rallied around to get the Westminster council to take action.

It issued an order to the building's owners, CTLX, mandating that the Carlton be rebuilt brick by brick.

A planning inquiry validated the decision and determined that the pub should be reconstructed "in facsimile," even down to the characteristic tiled pub name and the red bricks that make up the building.

“They said it would be too difficult to do, but we had an answer for that, we had a suspicion before the demolition that they would do something, so we asked Historic England to think about listing it. They took a plaster cast of every tile, they took pictures and documented everything.”

The developers were left with no other options, so they began the rebuilding process. Robertson quoted “And to be fair to [CTLX], they have done amazing work. It looks fantastic.”

Although compliments directed toward those responsible for the destruction can only go so far.

The Carlton Tavern Before And After Demolition 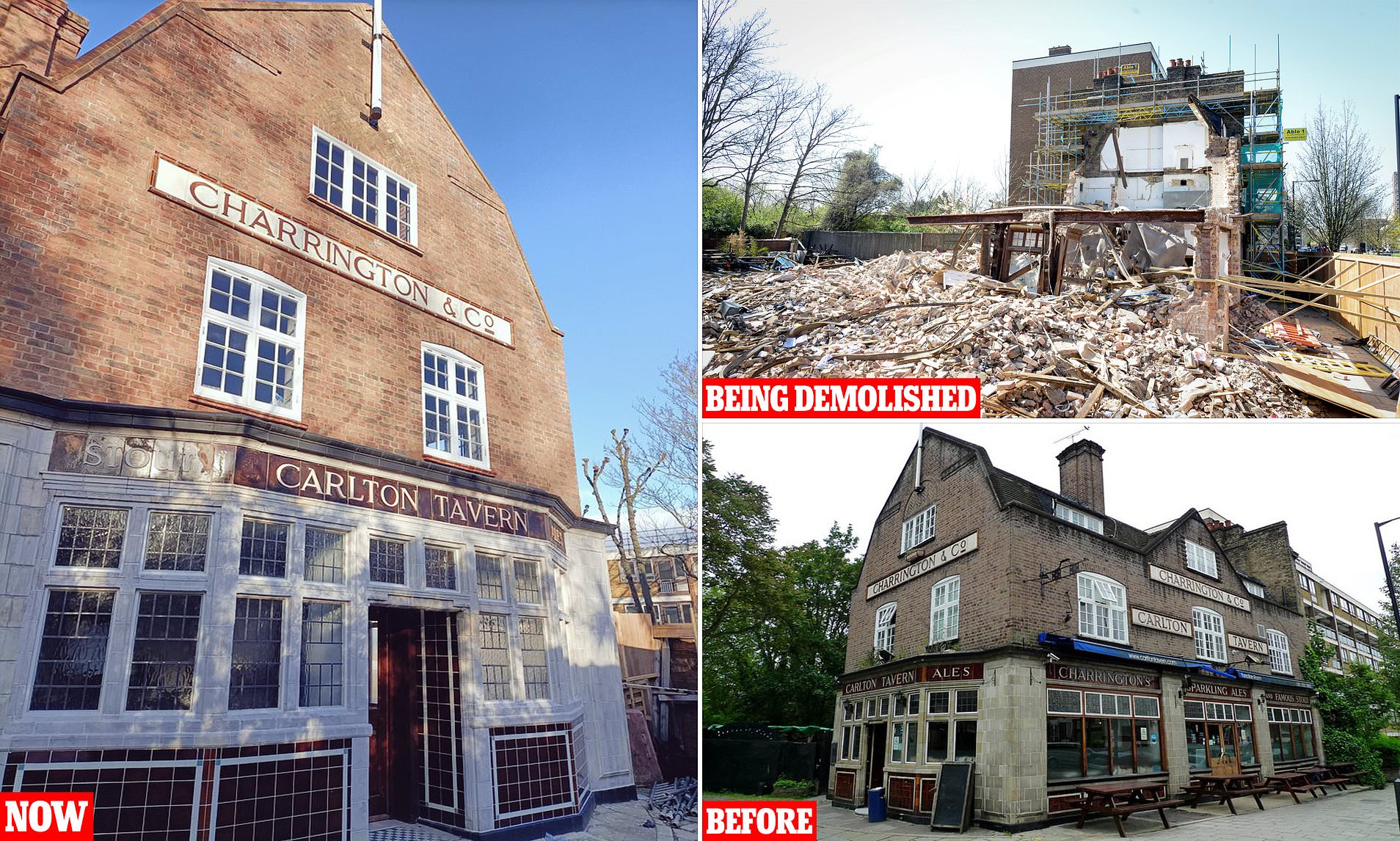 “I doubt they will be [at the reopening]. The community would eat them alive,” she said.

Photos obtained before 2015 show that the wooden doors, fittings, and tiled signage of the Carlton Tavern are eerily similar to those in the current building.

Tom Rees and Ben Martin, who founded Homegrown Pubs the previous year, had taken over the lease for the business, and they were in the process of putting the finishing touches on the fit-out.

Rees stated that quite a few components of the bar and the fireplace, in addition to the banister, had been salvaged from the wreckage.

The fixtures that are only partially functional in the bar convey the tale of the establishment's history.

It's not completely perfect, which we really love because it gives the building character and charm, as evidenced by the fact that there are chunks of shattered wood here and there.

The cellar was renovated by Rees and Martin, and it is stocked with beers produced by local breweries in the London area, such as the Camden Town Brewery, Five Points from Hackney, the London Brewing Company, and Anspach & Hobday.

“Ben and I have been running pubs and restaurants for a long time, and we decided to set up our company,” Rees said.

“I live locally and I knew about the pub. This has happened multiple times in different places and there’s never been a result like this.”

“From the outside, it seems like a totally mad thing to do – setting up a pub company during the middle of the pandemic.” 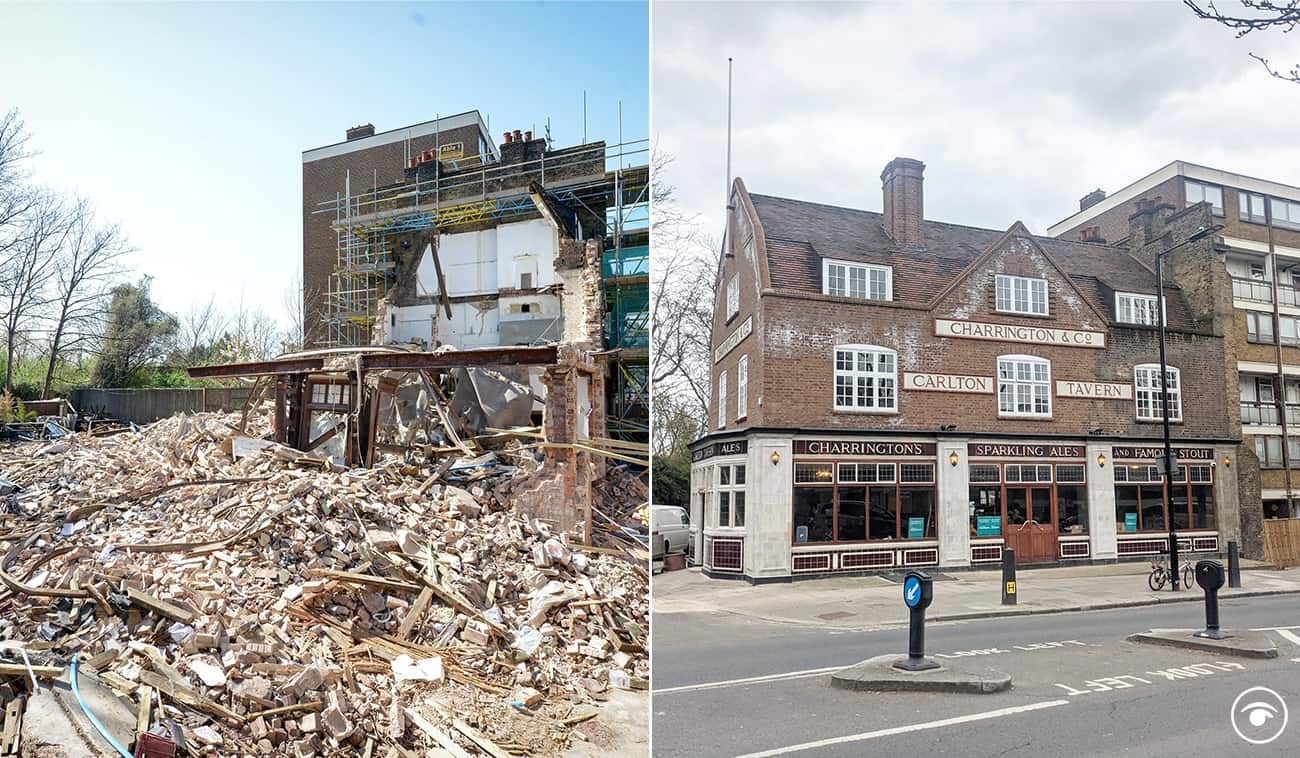 Carlton pub being demolished; The Carlton Tavern after rebuilt

“But, from the inside, landlords have had the upper hand with leaseholders for ever, so this was an opportunity to level the playing field across the industry.”

A Reddit user Thebigchil73 said, "Yeah it’s cool as fuck. The developers were an overseas company that just had to throw their hands up, realise they’d lost and rebuild it."

Yes the CTLX developer is an Israelian Company.

Another answered that comment, "Doubtless they have lots of other development projects going on there and are motivated to be in good standing with local and regional authorities.

Rebuilding this would obviously be a lot cheaper than abandoning a whole portfolio worth of properties."

The council issued an order that the tavern should be completely reconstructed brick by brick. On April 12, 2021, it reopened for business.

How Much Did It Cost To Rebuild The Carlton Tavern?

In January 2015, CLTX, which has its headquarters in Tel Aviv and is owned by Ori Calif, submitted an application to the local council for planning approval to demolish the pub and replace it with a bar and a block of flats.

What was your reaction when you heard about the news that the developers rebuilt the Carlton Tavern London as it was illegally demolished in 2015?

Have you heard about My Kids TV youth shows n 80's England?