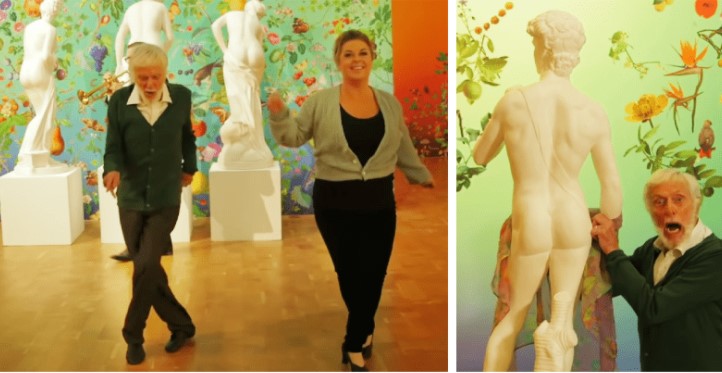 Older people usually lie in bed and read the newspaper in a rocking chair, but a "96-year-old Dick Van Dyke is a hoot as he sings and dances with wife in new music video. Directed by Arlene Silver, the hit 1950's song “Everybody Loves a Lover” is dueted by the Hollywood veteran who is dancing and duetting with his wife, 50. Dick has kept performing even though he is now 96. In 2020, he formed a barbershop quartet called The Vantastix, which also appeared in the music video.

“Everybody Loves a Lover” Arlene & The Vantastix

Dick Van Dyke In “Everybody Loves A Lover” Music Video

A four-time Emmy winner, Van Dyke, was his silly self throughout the video, and it's as delightful as you'd expect. For more than half a century, Van Dyke has been a cinema and television icon. "Chitty Chitty Bang Bang," "Mary Poppins," and "Bye Bye Birdie" are just a few of his well-known film performances.

In the 1960s, he had his own show with the same name. Silver begins the video by singing Day's sections while Van Dyke scat sings in the background. The Vantastix, which consists of Eric Bradley, Bryan Chadima, and Mike Mendyke, also supplies vocals. As Silver continues to sing, they can be seen joining in and snapping their fingers.

His moves were reminiscent of several of his own from films in which he had starred. People can't get enough of the star dancing after the video went viral. He can also be spotted on set winking at the camera and joking around with naked sculptures. Silver and Van Dyke close the video with a beautiful kiss and a snuggle on a loveseat.

On the radio show Bride and Groom on February 12, 1948, he married the former Margerie Willett at the Chapman Park Hotel on Wilshire Boulevard in Los Angeles. Christian, Barry, Stacy, and Carrie Beth were their four children. After a long separation, they divorced in 1984.

The relationship between Michelle Triola Marvin and Van Dyke began in 1976. In 2009, she died. They were together for more than 30 years. On February 29, 2012, at the age of 86, Van Dyke married Arlene Silver, a 40-year-old make-up artist. They met at the 13th Screen Actors Guild Awards in 2007 while Silver is working.

From October 3, 1961, to June 1, 1966, the Dick Van Dyke Show was an American television show that ran on CBS. It ran for five seasons and 158 half-hour episodes. Calvada Productions was in charge of making the movie.

The two main scenes show Rob Petrie known as Dick Van Dyke, the lead writer of a comedy/variety show that is made in Manhattan, at work, and at home. Viewers get a look inside the writing and making of a TV show such as the fake Alan Brady Show.

Here are some audience reviews about the show:

"Best TV show! I grew up watching this show with my family when I was a little kid on vacation at the beach. We would sit together in the living room in the evening after a wonderful long day on the beach and watch Dick Van Dyke and Bonanza. I'm so glad my parents showed them to us when we were young, with good clean humor the whole family can enjoy!"

"I love this show so much! It's a good, a decent family comedy that the whole family can watch. Simple, clean humor that cracks me up every show. A classic that has never been topped. There are several other shows that are awesome, but this is the best, all-around great show. It's so hard to find any show that doesn't have cussing, blood & gore, violence, inappropriate & blatant sexuality, half-naked people, drug use, etc."

"Awesome show and acting. Nice to see in 2021 to take my mind off these turbulent times. 'Oh, Rob!' Gets me every time. Lots of laughs and fun. I watch them over and over. So many favorite episodes. However, 'Pink Pills and Purple Parents' is my absolute go-to when I am feeling low. Laura: 'One scoop for MooMoo, one for Robbie, one for Daddy, and one for Laurie.' 'It's time for some music MooMoo, oh yes, here we go!" LOL. Hard to believe that only Dick van Dyke and Larry Matthew, are the only ones left. Enjoy everyone!"

Dick Van Dyke has a net worth of $50 million and is a legendary actor, comedian, director, and producer. He amassed his fortune as a result of his acting performances in numerous successful films, musicals, TV sitcoms, and dramas, as well as his directing and producing ability. He is most remembered for his appearances in classic musical films such as "Bye Bye Birdie" in 1963, "Mary Poppins" in 1964, and "Chitty Chitty Bang Bang" in the year 1968.

The headline: A 96-Year-Old Dick Van Dyke Is A Hoot As He Sings And Dances With Wife In New Music Video is really an entertaining video to watch. We can tell how delighted Dyke was to be dancing and singing with his wife. But that's not what's going on behind the camera. Dick Van Dyke is a typical senior citizen who struggles with arthritis, COPD, and spinal stenosis, but he doesn't let that stop him from providing entertainment to all.