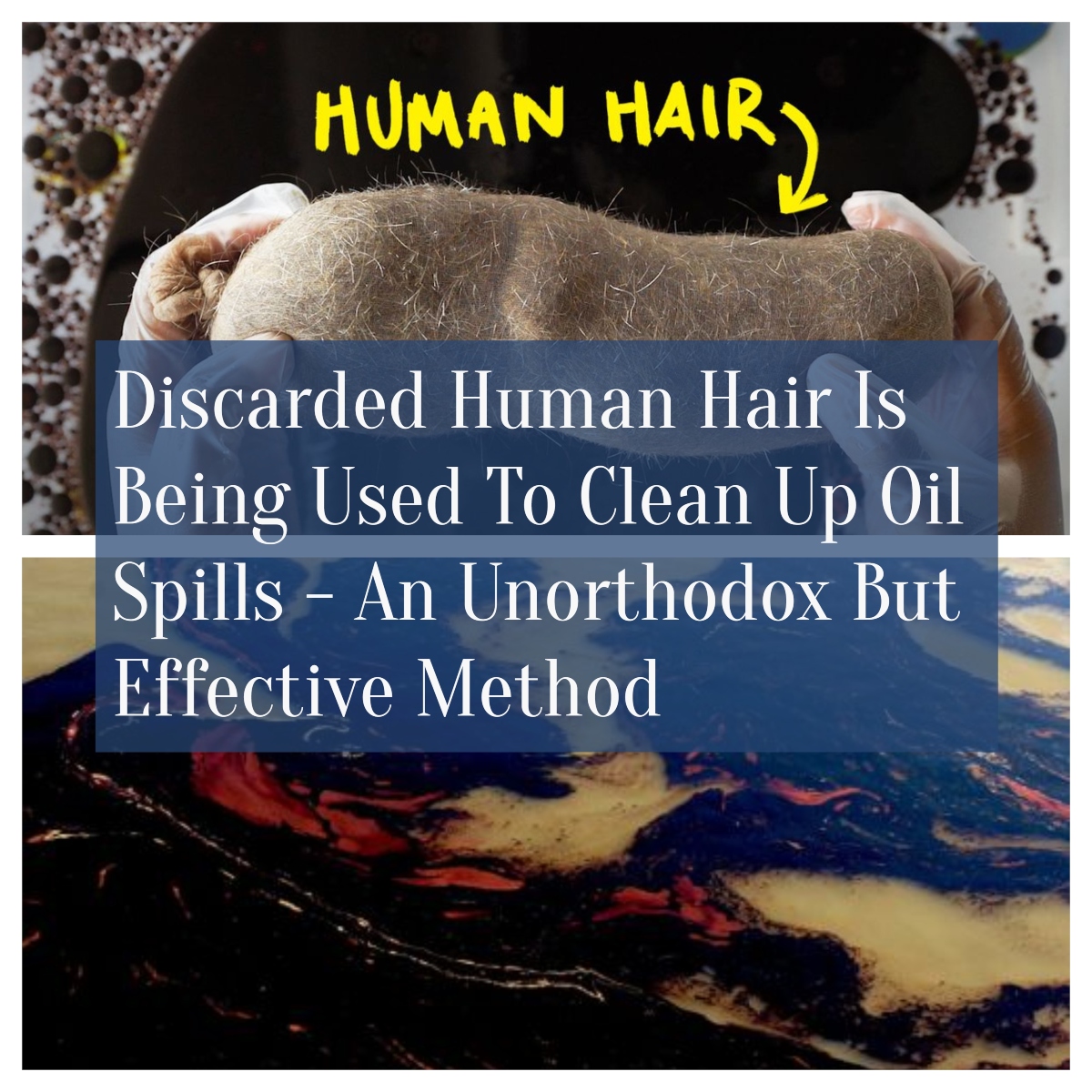 After being cut, human hair is typically thrown away. However, a non-profit organization has been using discarded hair to create unique mats that are used to protect the environment. The discarded human hair is being used to clean up oil spills.

Every day, Lisa Gautier, from the non-profit organization Matter of Trust, receives close to a dozen packages containing human hair.

Most people would find this unsettling, but Gautier knows that the blonde, brunette, and all the other colors of hair will turn into something incredibly "green."

Gautier uses donated hair to create booms (long tubes) for oil spills at sea and mats to absorb spills on land via her San Francisco-based nonprofit organization, Matter of Trust.

Polypropylene mats are a common tool used to remove oil from land earlier.

But polypropylene can't break down on its own, so making it means that more oil has to be taken out of the ground.

Human hair, on the other hand, is a sustainable, natural substitute. The discarded human hair is being used to clean up oil spills that happen in the ocean.

Hair repels water and is biosorbent, which means it can absorb toxins like oil and heavy metals.

But, especially in the case of major environmental disasters, the use of hair booms and hair mats for such a purpose hasn't yet become widespread.

On the other hand, hair is easy to get and good for the environment. It can soak up about five times its weight in oil, although it doesn't grow on trees.

One of the worst offshore oil spills in US history was the Deepwater Horizon oil leak in 2010.

Over the course of 87 days, hundreds of millions of gallons of crude oil leaked into the Gulf of Mexico, killing marine life and plants and doing a lot of damage to coastal towns.

Hair booms were not one of the main strategies used to stop that disaster.

State, local, and federal governments, as well as BP, choose to use more traditional methods instead.

These methods can be more expensive and harmful to the environment than the oil spill itself.

According to Gautier, there are about 900,000 legally operating hair salons in the US. They can each easily remove about a pound of hair per week.

Our project is to divert this from landfill, it makes much more sense to use a renewable natural resource to clean up oil spills than it does to drill more oil to use to clean up.

Oil Spills Are A Rising Issue

In addition to endangering public health, oil spills have a number of negative effects on the environment and the economy.

According to the National Oceanic and Atmospheric Administration, tanker accidents around the world leaked about 10,000 metric tons of oil into the environment in 2021. There were also 175 leaks at sea and on land in the US.

One million gallons of potable water can be contaminated by just one quart (about one liter) of oil, claims Matter of Trust.

This year, there have been major oil leaks in Thailand and Peru that have let out more than 513,000 gallons of oil.

Human hair and animal fur are shipped to Matter of Trust's warehouse in San Francisco to make mats for cleaning up oil spills.

Gautier estimates that 5% of the world's oil pollution is caused by headline-grabbing spills.

Leaks from cars and water that naturally seep up from the sea floor and into the ground happen more often, but they are still bad for the environment.

The Basics Of Oil Spill Cleanup

In order to address a variety of environmental challenges, Gautier and her partner, Patrice Gautier, co-founded Matter of Trust in 1998.

Three years later, a tanker ran aground on one of the Galapagos Islands called San Cristobal. The Gautiers, who wanted to help clean up the mess, joined forces with an Alabama hairdresser named Phillip McCrory.

NASA tested a prototype McCrory had created in 1989 that used hair to absorb oil and found it to work effectively.

Matter of Trust and McCrory worked together to create booms and mats made of human and animal hair.

Matter of Trust gets hair trimmings from salons, pet groomers, and private customers every day at its warehouse in San Francisco.

To produce the mats, the packages are examined for contaminants like debris, dirt, or lice.

Then, the hair is separated, spread out across a frame, and put through a specially designed felting machine.

The majority of Matter of Trust's cleanup work is done on land, either to repair coastal damage from maritime spills or to clean up spills that occurred on land.

According to the company, about half of its goods are purchased by institutions like the US Air Force and government agencies, while the other half is donated, frequently to volunteers working on Matter of Trust clean-up projects.

According to Gautier, Matter of Trust has produced over 300,000 booms and over 40,000 hair mats for significant clean-ups, including the 2010 BP Deepwater Horizon oil spill in the Gulf of Mexico, and many more for non-emergency spills, including everything from decontaminating storm, drains to soaking up oil from leaking vehicles and machinery.

Reddit user iMathew1990 shared a suggestion on how salons can separate hair for this purpose, "I’m certain a barber/hair dresser would happily separate hair and store it for free collection. Maybe even a little bit their way per bag. They already clean it up and bag it for the bins. Just have special bags sent out with a schedule on collection. Less frequent for smaller independent shops, more frequent for the larger franchises etc."

How Does Hair Absorb Oil?

BambboFatass shared how hair is a good solution for oil spills, "Hair naturally retains oil, hence why we have to use shampoo or soap to get rid of natural oils from our body. So if the hair starts off clean and you use a hair mat in an oil spill, it will soak up oil quite easily.

However, there are better options according to the full video (I happened to watch it on YouTube prior to this posting), because while hair does soak up oils it also gets incredibly heavy. I'm not sure if you've ever had long hair or not, but anyone who has probably is familiar with the feeling of a heavy head when long hair is wet. The water held in the hair adds A LOT of weight. Anyway, there are man-made materials that soak up oils without getting too heavy and unmanageable to reclaim from the waters once the hair mats are loaded with heavy oils."

Yes, human hair can clean up oil spills. According to a University of Technology Sydney study, dog fur and human hair work best for removing oil spills. The basic idea is to make hair mats out of hair clippings that would otherwise be thrown away. These mats soak up oil and clean the water.

How Do Humans Clean Up Oil Spills?

The three techniques that are most regularly employed to clean up ocean oil spills are dispersants, booms, and skimmers. Every method has benefits and drawbacks. The quantity and type of oil, the ocean currents, and tides, and the weather all affect how effective a method is. The environment may be harmed by some techniques.

Is Human Hair A Renewable Resource?

Human hair is a good material resource because it is abundant, biodegradable, and can be used over and over again.

As part of a plan to make the hairdressing industry more environmentally friendly, discarded human hair is being used to clean up oil spills, hair bleaches, and colors are being burned to create energy. And this is a very good step taken by people. Being responsible for what you have done is a very good initiative towards a better future.

Have you heard about the side-scan sonar system?