It seems that in China it’s fairly commonplace to consume a variety of bizarre ‘foods’ that many of us Westerners would never consider placing inside our mouths.

From a distance, it seems as though nothing is really off limits when it comes to delicacies, whether it  walks, crawls, flies, swims or slithers.

LIVE baby mice is certainly another to add to that list.

Casually served on a dinner plate alongside some sliced tomatoes as a garnish are tiny, baby mice that a Chinese man can be seen chomping on as he picks up the creatures with chopsticks. 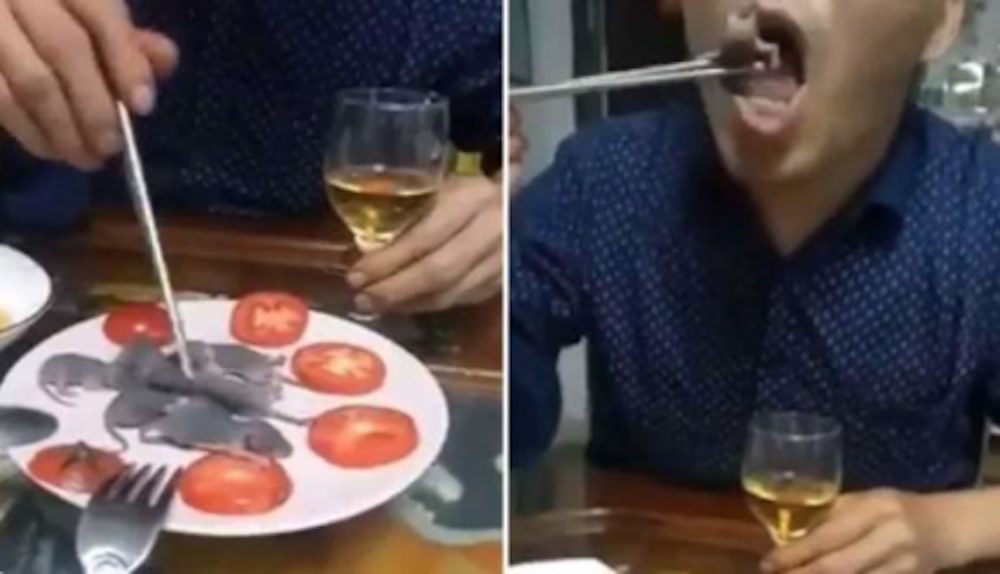 We must warn you the following footage is pretty revolting so only view if you have strong stomach and are not easily upset.

What is that sauce he’s dipping it in?

There’s no way that can suddenly make it more appetising.

Besides live mice, some people also have no qualms in eating live tadpoles and frogs, despite people around the world condemning them as “sick” for their eating practices.

In the following video a man is seen wondering into a supermarket, picking up a live frog and taking a huge bite from it.

It is pretty harrowing and literally turns our stomach.

Even children are being fed live tadpoles.

For many of us Brits, the thought of placing a squealing baby mouse in our mouths after dipping it in sauce is inconceivable,  yet those featured in these video clips seem to have no sense of empathy for the creature they are ingesting.

And the bizarre and sickening delicacies don’t end there.

When it is not alive the Chinese also like to indulge in sheep penis, threaded on a stick, grilled and served hot. The eggs are soaked in a brine for 100 days until the yolk turns green and the whites become gelatinous and dark brown.

The eggs are said to have a creamy cheese flavour with a strong smell.

One only has to imagine to dry heave.

We hope you’ve already had your lunch.