Sick of misinformation spread about face masks, a doctor ran 22 miles to prove that they do not affect oxygen levels for the wearer.

You can’t say fairer than that, can you? Definitive proof that face masks don’t stop you from breathing comfortably.

From tomorrow (24th July), face masks will be obligatory in shops and public places for the UK public. Like we’ve seen over the pond in the US, many people have hit out against the masks – saying that they breach constitutional rights or something – and now a few idiots are acting similarly here.

While they’re not saying the masks are against their constitutional rights in the UK – because that’s not really a thing here – a lot of people are saying that they inhibit healthy breathing. Bizarre, I know, but a doctor has put that claim to bed. 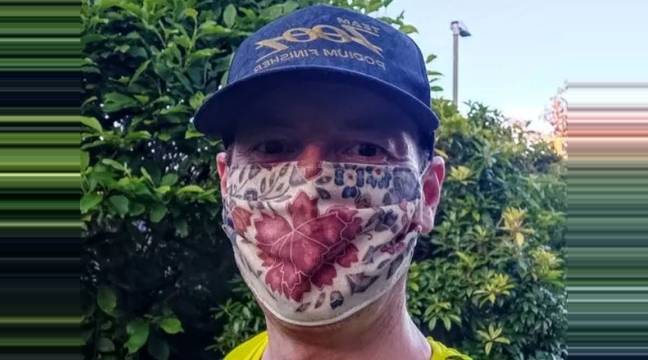 Tom Lawton is an ICU doctor in Bradford Royal Infirmary, and he ran 22 miles too and from work to prove that masks are healthy, while also raising over £1,400 for the Trussell Trust.

Speaking to the Yorkshire Evening Post, Lawton explained his motives, saying he was sick of the misinformation being spread by the misinformed.

“I’ve done this because, working on ICU and in the hospital, I’ve seen some of the worst of what this virus can do – even to people in their 20s and 30s.

“I don’t think there’s a single magic bullet that will fix this but a whole series of things we can do which play a small part each.

“One of those, and one of the easiest, is probably wearing masks.

“So it upsets me to see misinformation about oxygen levels etc that might scare people away from them.

“I’d never actually run in a mask before doing it for real.

“I was confident in medical and physiology training.

“The mask didn’t come off at all (not even for food or drink during the runs) – and oxygen levels were stubbornly 98 percent every time I checked.

“Please feel free to cite this when anyone suggests they’re bad for you, and stay safe – and Covid-free“.

Explaining his charity work, he then went on to say:

“The choice of the Trussell Trust for fundraising was because they run the main food banks I’m aware of in Bradford, and many nationally.

“They were already needed too much prior to 2020, and the pandemic has made things worse for so many people – I’ve seen reports on how many children don’t have enough to eat right now so I feel it’s something really important to try to help“.