Celebrity Convoys - Drake's Security Oversteps The Boundaries On The Road 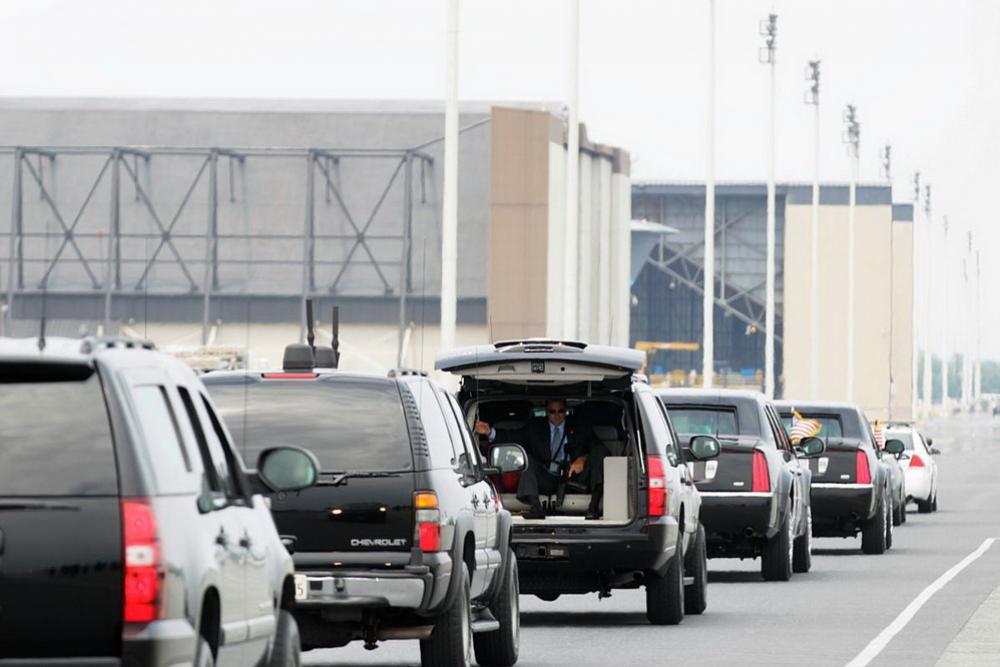 Rich and famous Americans are increasingly opting to drive in armored cars equipped with features such as electrified door handles and sealed ventilation systems to protect themselves against chemical attacks and for their own protection. Drake's security escort ensured that he had a quiet and secure journey on the road.

We're used to seeing the automobiles of the affluent and famous splashed throughout the media, from sleek performance cars and massive SUVs to antique motors, whether they're flying around LA in a drop-top Ferrari or strolling the streets of Knightsbridge in a Porsche.

What Is A Convoy?

According to Vocabulary com, traveling in a convoy entails being escorted by a group of protection vehicles. If you're a teenage rock star with millions of admirers, you're probably going to require a security convoy simply to see your grandma.

If the President comes to your town, a large convoy of secret service vehicles, limos, and police cars may be present. Ships can also cruise in convoys, with important cargo surrounded by battleships. Convoy is a verb that denotes the act of traveling together, such as when your family and other families convoy to a camp area, driving as a group, stopping together, and waving to each other on the highway.

Do Celebrities Use Armored Cars And Convoy For Security?

Celebrities have always captivated our imagination, and we all like to be transported into their dazzling and thrilling lives, if only for a little while. Many individuals strive to copy them, from their clothing style to their automobile choice.

As most of us are aware, renowned persons such as politicians, diplomats, actresses, artists, showmen, and other powerful people utilize armored automobiles and convoys to defend themselves from armed assaults, just like how this Drake's security shows an example of this. They rely on models that exhibit great design and luxury while also providing passengers with reliable protection. Their favorite models strike a balance between luxury and ultimate ballistic protection.

Of course, celebrities have multiple vehicles in their garage, and not all of them are extremely costly; their collections are dominated by both super-luxury automobiles and more ordinary cars that are used for driving around town or simply blending in with the crowd. But there is no question that having at least one armored automobile is a must for any celebrity.

Drake's Security Oversteps Their Boundary On The Road

This one-and-a-half-minute video shared by a Reddit user captured how Drake's security guarantees the celebrity's safety. It's amusing but will also make you realize how they overstep their boundary.

The video posted by a Reddit User shows how more than four cars cuts his way just because Drake is on the first car that cuts his way. This is Drake's security convoy and they indeed overstep their boundary, just like how the caption of the Reddit account the people on the thread agree. Drake's security convoy wants to follow Drake's car for his security but they want the right of way when clearly the stoplight is in red? That shows how indeed they overstep the boundary and a few violations on top of that because of him. This video made many eyebrows raised for its absurdity.

An elderly woman was seriously injured after being hit by a police motorbike security convoy for Britain's Prince William and his wife Kate last 2019. On Monday afternoon, the Duke and Duchess of Cambridge's motorcade were driving from London to Windsor when the tragedy happened.

According to authorities, the woman, Irene Mayor, is in a severe but stable condition. According to witnesses, the guard was on the wrong side of the road clearing traffic for the couple's convoy when the event occurred.

The Independent Office for Police Conduct, Britain's police watchdog, said it was looking into the matter. According to a spokesperson, the royal couple was "very worried and disturbed" to learn of the tragedy, and a member of their staff visited the woman and gave flowers.

"Their Royal Highnesses have extended their heartfelt condolences to Irene and her family and will keep in contact during every stage of her recuperation," the statement stated. The catastrophe occurred when the couple was on their way to Windsor for the Order of the Garter ceremonies at St George's Chapel.

A lady was hurt in a vehicle accident involving Prince Philip at the royal family's Sandringham Estate in January. The Land Rover Philip was driving rolled over. The 98-year-old was unharmed and quickly relinquished his driver's license.

Most Heavily Protected People In The World

Who are the world's most protected people? Some of the world's most significant, powerful, and influential individuals have the most amazing, massive, lethal, and, in some cases, weird agencies, forces, and special security groups.

These political leaders, business moguls, monarchs, or celebrities can change the lives of millions of people for the better or for the worse with the decisions they make, so their integrity and that of their family is extremely important. Therefore, both these soldiers, policemen, or guards train for many years to be the chosen ones to cover their backs and sacrifice their lives for that of a VIP (Very Important Person), in some cases, we cannot see them or we omit them.

15 Most Heavily Guarded People In The World!

Around the world, there are hundreds of people who are extremely significant, powerful, and wealthy. These are people who have not only engraved their names in the sands of time but who have also made an impact and accomplished incredible things in their respective sectors. Personal security officers, often known as bodyguards, are considered the right of royalty, celebrities, and political authorities to keep them secure from kidnappings and attempted killings just like how this Drake's security guarantees his safety.

Some of the world's most prominent, influential, and powerful people command some of the most astounding, huge, lethal, and strange agencies, forces, and special security units.