Drone footage shows the amazing moment a group of green sea turtles swam to the shore in Australia.

Think of all of that soup, eh? That’s a joke, obviously. I don’t think all of those turtles should be turned into soup. If I were to one-up that, I would say that if I were being forced to eat a turtle, I really don’t think soup would be my first thought.

Why soup? Why turtle soup? You probably shouldn’t eat turtles but if you’re going to, surely not in a soup? Is it because they come in their own bowls? Seriously is that it?

Lots of questions there for you to linger on, but now let’s get on to the old story in hand.

The drone footage shows silly amounts of green turtles coming from all corners of the Pacific Ocean to their ancestral breeding ground, which is something they do every year. The footage is studied to no end by the Queensland Government, as they try to work out just how many turtles there are in the world of North Queensland.

Despite the huge numbers you can see in the video, green turtles are currently listed as an endangered species, which would explain the Queensland government’s intense interest in the cold-blooded.

The turtles are heading to the remote and unpopulated area in Raine Island – towards the northern tip of the Great Barrier Reef – and experts estimate that around 60,000 will be there, which accounts for a large percentage of green turtles in the world. 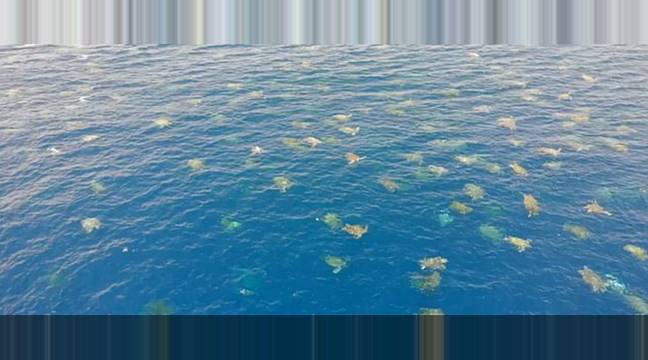 Explaining how using a drone makes his work so much easier these days, Andrew Dunstan, from the Queensland Department of Environment and Science, told 7News:

“Trying to accurately count thousands of painted and unpainted turtles from a small boat in rough weather was difficult.

“Using a drone is easier, safer, much more accurate, and the data can be immediately and permanently stored.

“This research is of prime importance to the understanding and management of the vulnerable green turtle population.

“In the future, we will be able to automate these counts from video footage using artificial intelligence so the computer does the counting for us“.