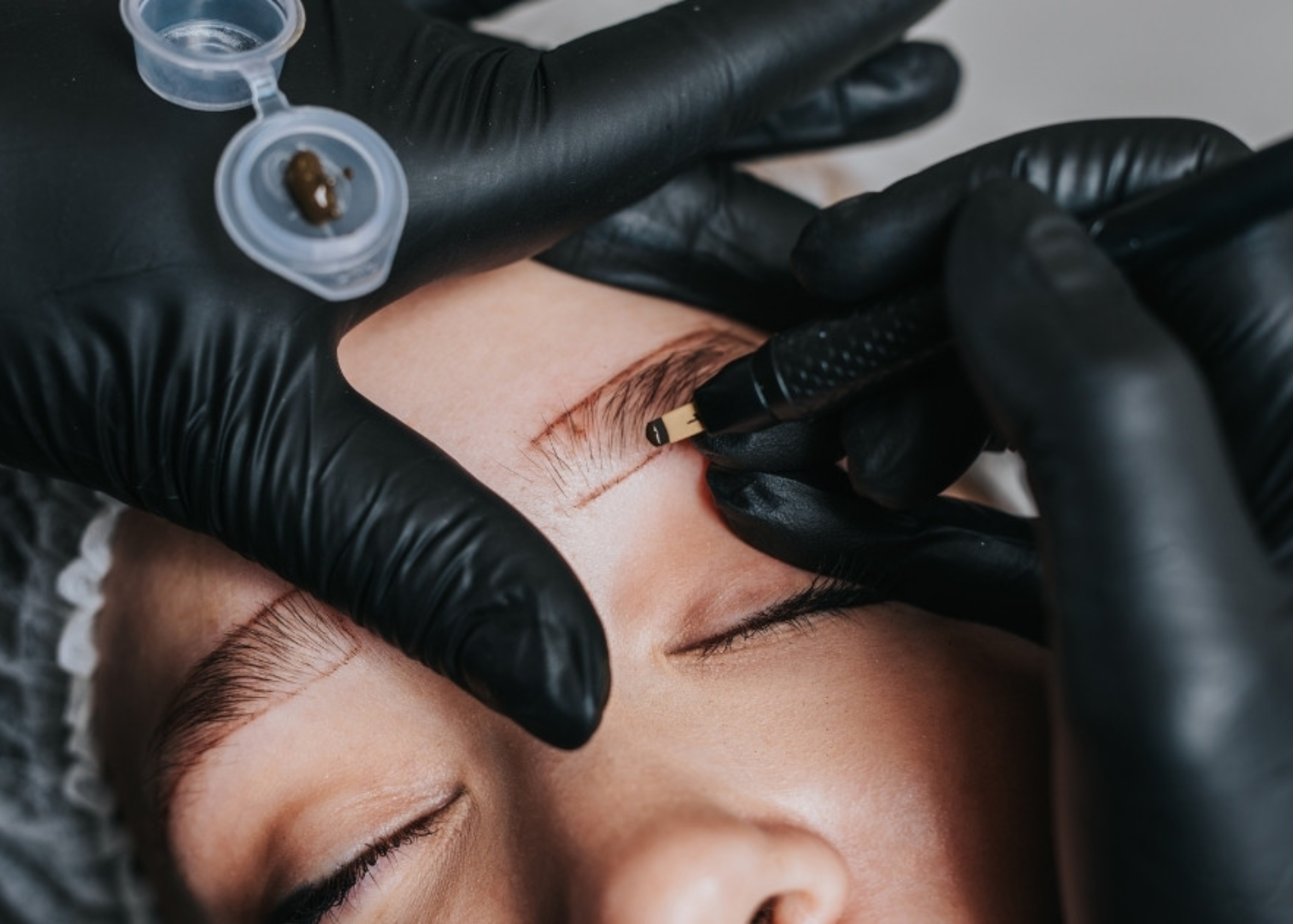 None of us have nice and gorgeous eyebrows, especially for women. Thankfully, there are cosmetic procedures such as trimming, shaping, and filling that have made it possible to improve its appearance. Contrarily, a frustrated Thai woman gets four eyebrows after a botched tattoo procedure.

Attempting to improve her appearance before an upcoming trip, 31-year-old Nipapron Meeking visited a cosmetic surgery clinic in Thailand. She was left embarrassed after discovering two extra arches on her forehead drawn with permanent cosmetic ink. A friend told Meeking to go to a clinic in the province of Rayong that was doing affordable cosmetic work on the eyebrows. 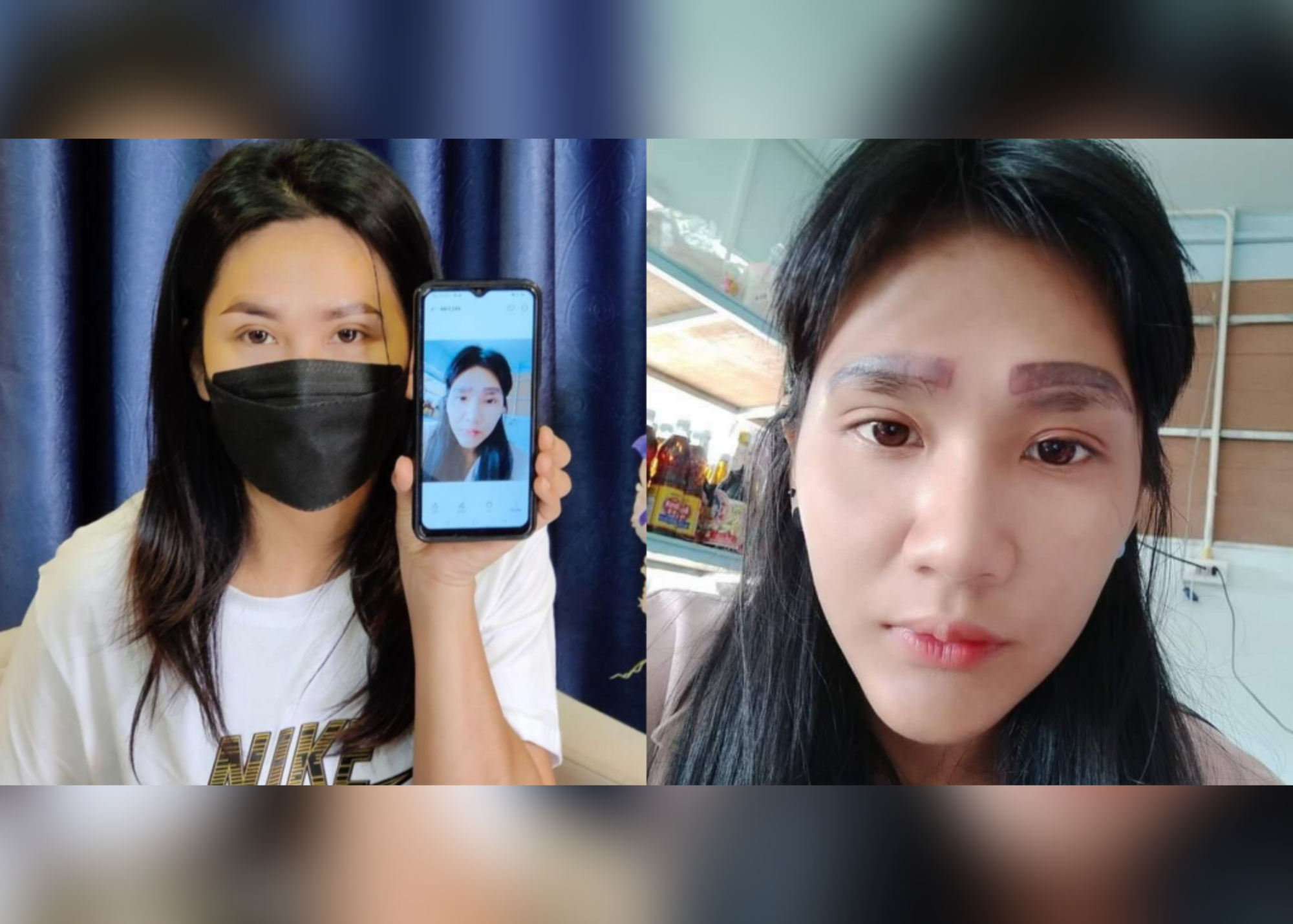 On the left are the eyebrows that were fixed, and on the right is Meeking's failed tattoo job

But she didn't think that her 1,500 Thai Bhat, or 41.08 USD, procedure to shape her eyebrows would go wrong. In an interview with Thai TV station Amarin TV, Nipapron said:

I remember planning a trip with my friends and wanting new eyebrows to look pretty. A friend suggested a shop for me. After the procedure, I looked in the mirror and was speechless.

When she complained, workers at the center assured her they would resolve the issue the following day at no cost. Ms. Nipapron was dismayed to return to the establishment only to find that it had closed down. The owners are unreachable, which is even more depressing.

Nipapron's self-confidence took a nosedive for an entire year, to the point where she could hardly bring herself to show her face in public. However, a good news is that, there is a good samartitan who informed about the struggle of this Thai woman.

Nipapron's plight went viral, and tattoo artist Pattawee Phumkasem saw it and offered to fix the botched job done on her eyebrows. A good samaritan said:

After seeing Nipaporn's condition, I knew I had to help her. It normally costs 15,000 THB but I'm willing to do it for free.

Phumkasem's procedure took three months because the old ink had to fade before the new eyebrows could be tattooed over it. The Amarin TV report shows how Nipapron worked with Pattawee to solve her problem. Pattawee fixed Nipapron's bad eyebrows and gave her new ones that look more natural and fit her face better.

She feels so happy and grateful that her problem was solved. From four eyebrows turned into a pleasing 2 eyebrows. Meeking stated:

Not long after what happened, the shop shut down and I don't know where the owner is now. I had a terrible time living with four eyebrows on my forehead, but luckily I found this new tattoo artist. With this new artist, I can finally live a normal life.

Watch the video below as she expresses her frustration about the affordable tattoo procedure:

What To Do Before Accepting Eyebrow Tattoo Procedure

Microblading is a great way to fix problems with your eyebrows, but it is very important to choose a professional with a lot of experience. Microblading is a type of cosmetic tattoo that makes your brows look thicker and better-shaped. It has become the most popular type of semi-permanent makeup in recent years, which makes sense since it looks great.

The procedure is thought to be fairly safe, but when it comes to long-term effects, it can be risky. People are mostly afraid of getting a bad job done when they get microblading.

Before your chosen artist touches your eyebrows, you may try the following suggestions:

Conduct Research or a Background Check

Consider the artist's portfolio and credentials before making a final decision. Verify that they have worked in the industry for at least two years and can provide you with examples of their previous clients' work.

You should be aware of where your artist is certified. If they are self-taught or have received training from an academy. Ask your artist to show you pictures of the brows after they have healed.

You will be able to see the color and strokes more clearly after they have healed. Once you've narrowed it down to a few artists, schedule a consultation.

The artist will consult with you to determine your goals and then sketch your brows to scale. Before the procedure starts, an expert will measure your eyebrows to make sure that they will be shaped the same way on both sides.

Find out what kinds of brow tattoos they can do, such as 6D strokes, ombre, a mix of the two, misty, powdered, etc. Make sure everything is in working order, from the needles to the studio's cleanliness.

How Long Does It Take For A Tattoo To Heal

Usually, it takes 2 to 3 weeks for the top layer of skin to heal after getting a tattoo. Even though it might look and feel fine, and you might be tempted to stop taking care of it, it can take up to 6 months for the skin under a tattoo to really heal.

What To Expect As A Tattoo Heals

What to Expect When Healing a Tattoo

In the first few weeks after getting a tattoo, taking good care of it can help keep it from getting infected and keep it looking good. Once the tattoo is done, the artist will put a thin layer of tattoo jelly or moisturizer over the whole area. Then, they will use plastic wrap or a bandage to cover the whole area.

Even though you might want to take off the bandage or plastic wrap to look at the tattoo, you should leave it on for at least a few hours. How long it takes will depend on how big it is and where it is.

This covering keeps bacteria, sunlight, and rubbing against clothing from getting on the skin. Usually, you can take off the bandage and wash the tattoo after at least 5 hours. After washing their hands well, a person can use their fingers to gently wash their tattoo with hypoallergenic soap and warm water.

It's likely that a client will receive conflicting advice about which lotion to use from their tattoo artist. Many people suggest using pure cocoa butter or shea butter, tattoo-specific creams such as Tattoo Goo, coconut oil, and alcohol-free healing ointments, such as Eucerin or Curel. Also, remember that chemicals with a strong odor can irritate the wound and harm tattooed skin.

Microblading Eyebrows Before And After

Microblading Eyebrows- See My Before and After Results!

How is microblading different from getting a tattoo on your brows? Microblading, in contrast to tattooing, occurs more superficially on the skin. Additionally, the color will fade away after about 18 months, so this isn't a permanent solution either.

A handheld needle or blade is used, so the hair strokes look much more realistic and subtle than with a tattoo. The technique does not involve any sort of pervasive electrical device.

This results in a sound closer to the scratching made by a cat scratching its back than the buzz of a tattoo gun piercing the skin. Some people may be allergic or sensitive to the pigments used in the brow tattooing process, but this is extremely unusual. Prior to any medical procedure, a professional will always conduct an allergy test to make sure there will be no negative effects.

Why Do Bad Eyebrow Jobs Happen?

The main problem in the permanent makeup business is that there are no rules about who can do the work. Some artists are self-taught and haven't even had the most basic training, but they still offer their services. Most of the time, they charge much less for their services, which is why a lot of people go to them.

Can Eyebrow Tattoo Be Corrected?

It is possible to correct botched tattoo eyebrows. Depending on the tattoo's condition, they may suggest laser removal. When done by a qualified dermatologist, this way of bleaching and removing unwanted pigment from the skin is safe.

How Long Do Tattoos Eyebrows Last?

Eyebrow tattoos typically last anywhere from one to three years. Colors that are lighter in tone tend to lose their vibrancy more rapidly than those that are darker. The colors used for semi-permanent eyebrows tend to be softer and more natural, which makes them more likely to fade.

Who Should Not Get Eyebrow Tattoo?

What Do You Do If You Don't Like Your Eyebrow Tattoo?

Try to cover it up with a concealer or corrector and give your eyebrows more depth with makeup. To make everything look good, beauty experts say to use the same color as the tattoo or a shade darker than the tattoo to hide it.

It's important for us to learn from the "frustrated Thai woman gets four eyebrows after a botched tattoo procedure" story, especially for all the women out there. Even if the offer is cheap, it doesn't always mean that the performance and result will be good. If someone asks you, you may want to think about the suggestion mentioned in this article before saying yes.