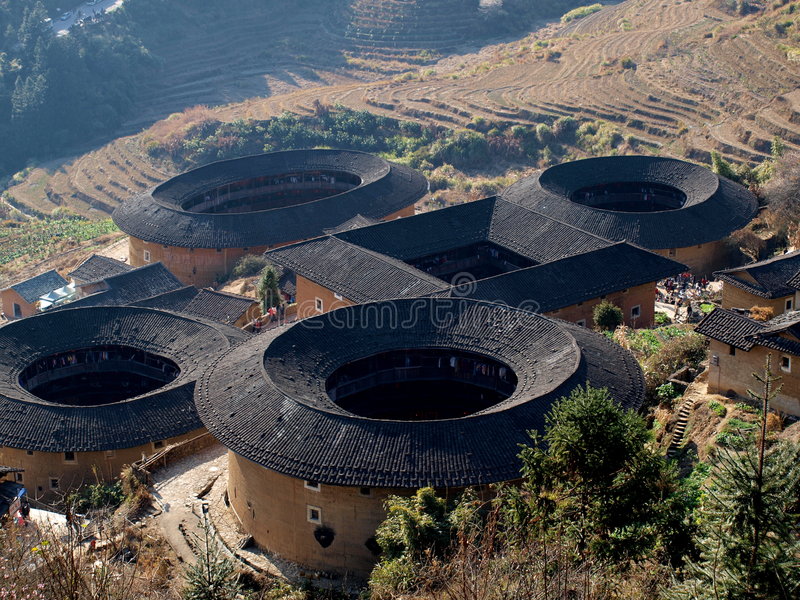 The Fujian Tulou, which literally translates as "earthen building," are historical residences that were constructed mostly of wood and mud. In 2008, 46 Fujian Tulou communal homes in China were inscribed on the UNESCO World Heritage List. Despite the fact that the residences have become a tourist attraction, some individuals continue to live in these multi-story fortifications. 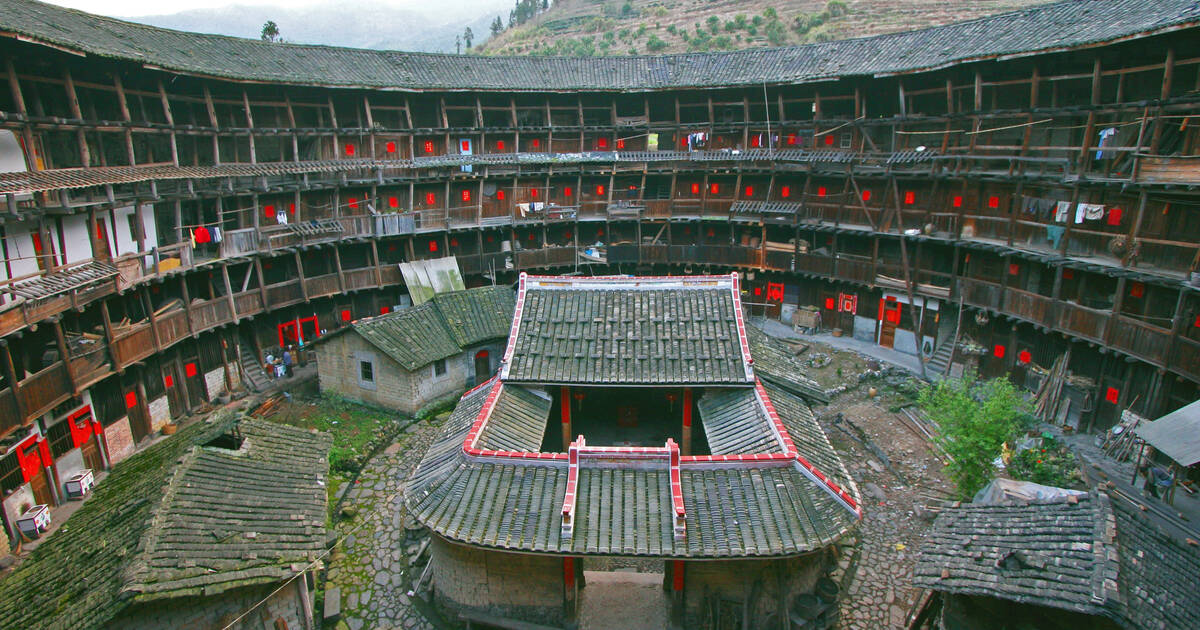 An inside view of Fujian Tulou communal homes in China

Fujian Tulou And The Hakka People

These residences are usually connected with the Hakka people and their culture. Their construction took place during the 15th and the 20th century. According to the United Nations Educational, Scientific, and Cultural Organization, the buildings were built to face inwards toward a central courtyard. Above all, their design is practical: in the case of a crisis, these huge community dwellings may be used as fortifications to protect residents.

The Hakka people, who relocated from northern China to provinces in South China, frequently encountered hostility from the local population. In order to defend against invading forces, the walls of the Fujian Tulou communal homes in China may be as thick as five feet in thickness. The fortifications included iron gates, underground escape passages, and weapon slots, which enabled the occupants to defend their residences in the event of a siege or invasion.

"The door openings are typically constructed out of granite frames with timber door panels. As there is only one entrance, it made the building easier to defend," Singapore University of Technology and Design assistant professor Yeo Kang Shua spoke about architectural history, theory, and critique at the university. According to him, "Window openings are typically on the higher levels, making access from windows difficult too."

Interior Of The Fujian Tulou Homes

The interiors of the homes, in contrast to their intimidating exteriors, are intended to be shared by several people. Residents can gather in the main courtyard for events such as religious rituals, festivals, and weddings, as well as for socializing. Each of the rooms has a similar layout and design to the others. There are individual rooms in the building that can be seen in this interior image of a tulou.

Each tulou can be thought of as a miniature community in its own right. The building is divided into sections that are reserved for families from the same clan. The purpose of the corridors connecting individual rooms on each floor was to encourage inhabitants to engage with one another in a friendly manner.

A square floor plan may be found in some of these houses even though the majority of them are donut-shaped! Because a circular plan was used in the construction of the protective building, "As a defensive structure, having a circular plan meant that there will be no blind corners or spots," Yeo explained. 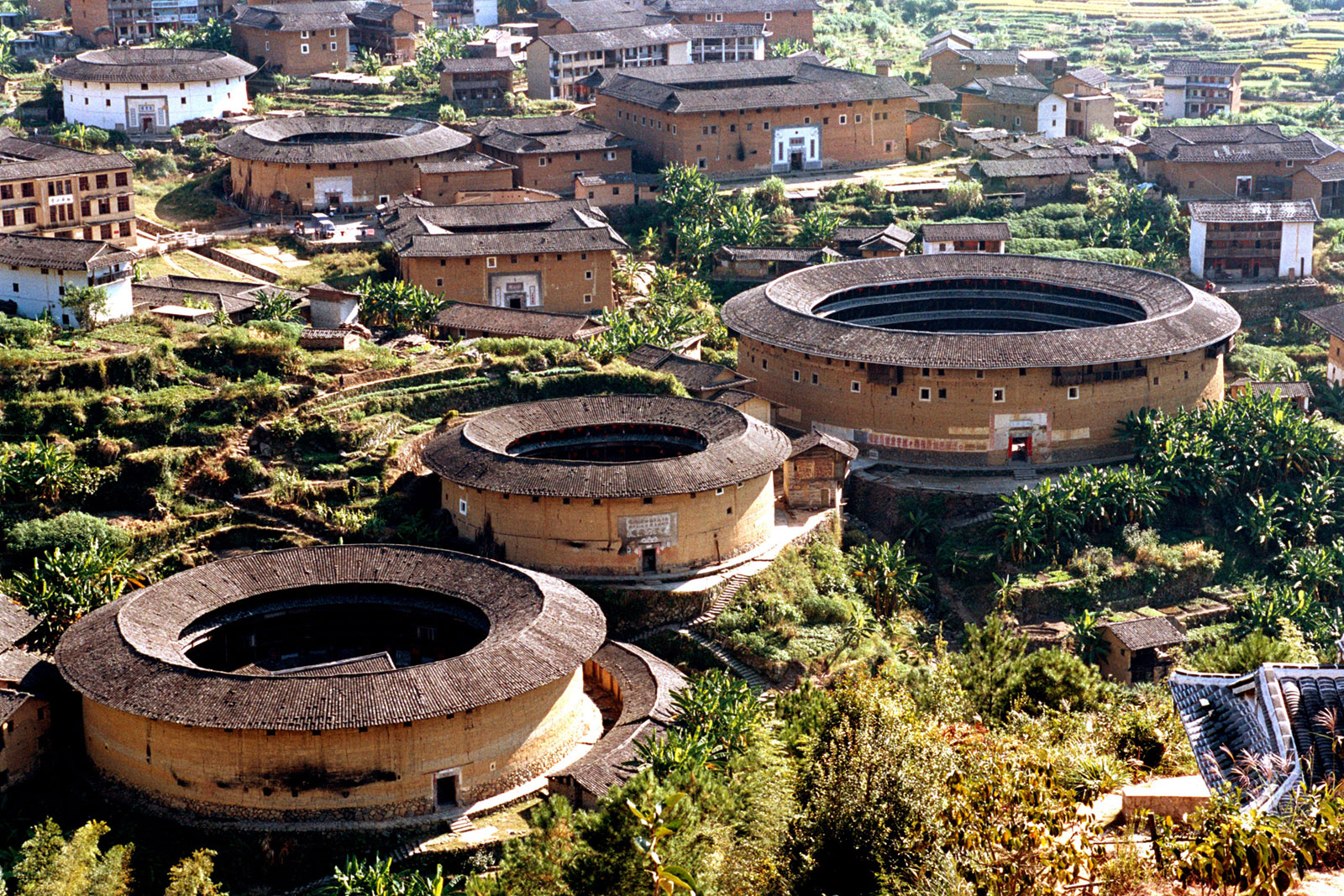 A drone shot of fujain tulou communal homes in China

In the words to the United Nations Educational, Scientific, and Cultural Organization website, the tulou is an "outstanding example of human settlement." Despite the fact that these buildings are open to tourists, many elderly people still call them their home. It has been years since the number of people living in tulous has decreased as an increasing proportion of the younger population migrates to urban areas in search of better employment and educational possibilities. The increase in tourism in the area has given these old residences a new lease on life by allowing local businesses to thrive.

The Life in Tulou

Fujian Tulou is one-of-a-kind Chinese agricultural structure built by the Hakka people of Fujian Province, China, to house their livestock. The majority of them were constructed between the 12th and the 20th century. round 800 people each.

"From the rice fields, it appears to be a farming collaborative. So all the functions of a farming village (shops, housing, processing of produce) have been centralized into a few large buildings. The courtyards of the buildings appear to be lined with shops and other common space. I like it."

"There are over 3,700 Tulou in China, but only 46 on the World Heritage register. Not sure why that is. Maybe it's the 46 oldest ones or something."

"these are homes of the hakka people in china, they were originally designed this way because of family clan wars to protect those living within - thus, no windows on the bottom floor."

Despite the fact that the tulou houses are open to the public for visits, there are still individuals living in them, many of whom are members of the same family. The importance of communal life, as well as equality, in these villages cannot be overstated. Each of the rooms has a similar layout and decor.

Is Mulan From Fujian?

Specifically, according to Variety, the main girl and her family are shown living in a round "tulou" house, which is characterized as a "traditional communal housing arrangement of the Hakka people specific to coastal, southern Fujian," in the film's trailer. Mulan's family is unlikely to be living in a home because they are from northern China, where she was born.

Fujian Tulou communal homes in China are primarily a massive, enclosed, and fortified earthen structure constructed of earth. Unlike some of them, which have a circular shape, others may have a rectangular or square shape. They were built in accordance with the principle of "closed exterior, open inside" which is common in Chinese house traditions.