Giant Sturgeon Fish In Canada - First Caught And Then Released 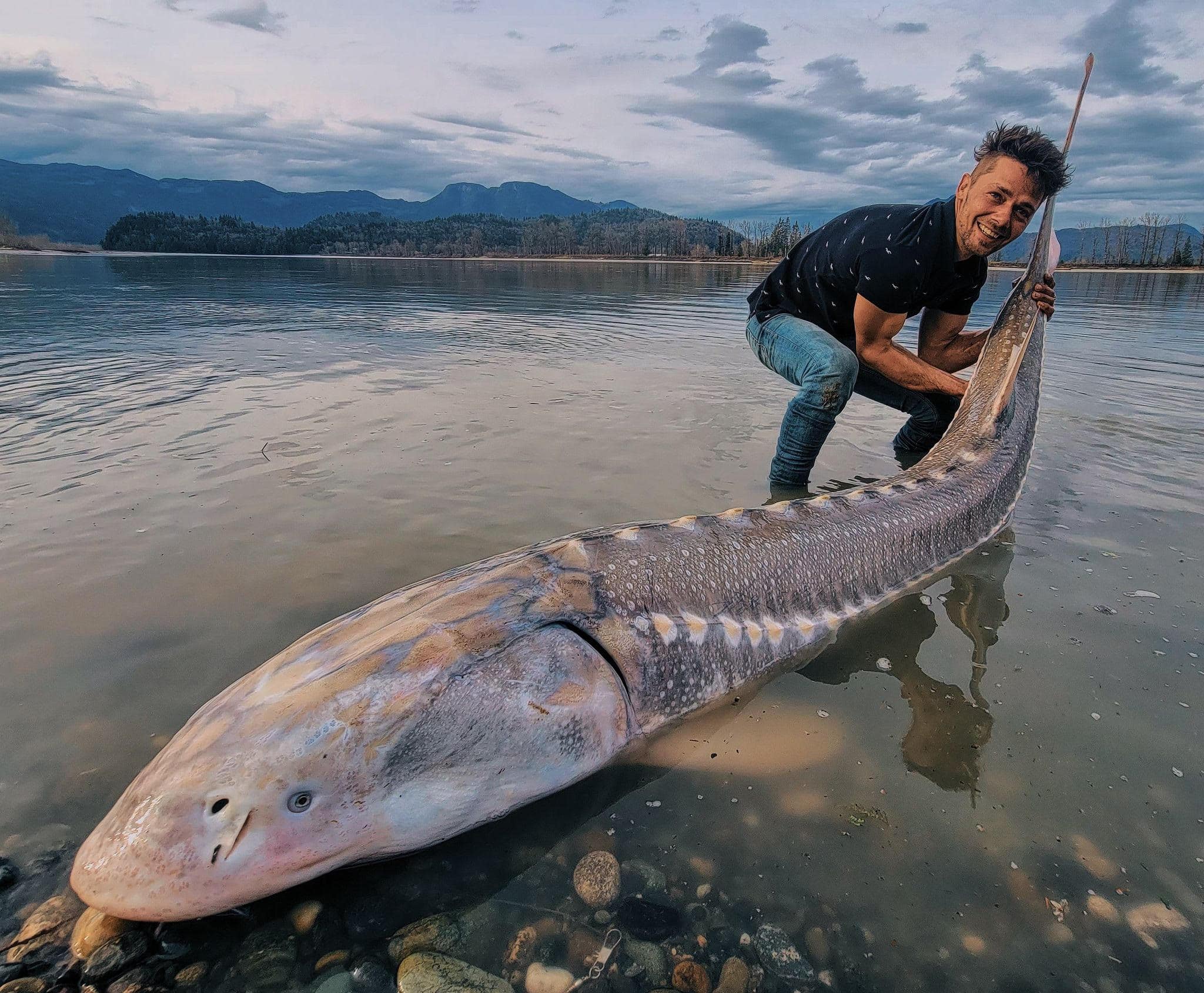 A 100-year-old, giant sturgeon fish in Canada, has been caught and placed back into the river after being captured.

On March 6, Yves Bisson caught an exceptionally unusual fish in the Fraser River, near Chilliwack, British Columbia. In his assessment, Bisson, who owns a fishing tour business, the sturgeon must have been over a century old. His estimate was that it was approximately 10 feet in length and weighed 600 pounds.

There are around 27 species of sturgeon found throughout the world, with more than half of them being classed as critically endangered or endangered. Sturgeon have existed since the time of the dinosaurs, but they are presently threatened by overfishing and habitat loss, among other things. They are also harvested for the eggs they lay, which are used to make caviar, among other things.

This freshwater fish, which lives in the Fraser River, is the longest-lived and largest freshwater fish in North America, with a lifespan of over 100 years. They have been known to survive for over a century and grow to be more than 20 feet in length. 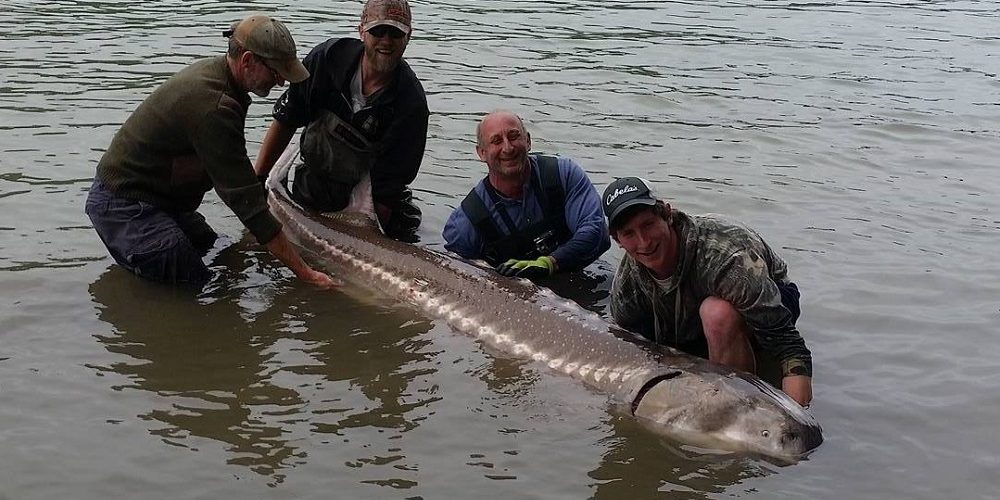 Four men holding a giant sturgeon in the river

As part of the programme, Bisson scans and tags sturgeon on a regular basis. After catching the fish, he told that he was surprised because the fish had no tag on it.

Giant sturgeon, some of which were more than 10 feet (3 metres) in length, were once a common sight in rivers throughout North America. There were some of these huge fish that had spent more than 100 years hunting in the waters of the New World, and they would trawl riverbeds and lake bottoms. Overfishing and habitat destruction, on the other hand, have brought the species to the brink of extinction.

"I have landed over 22,000 sturgeon on my fishing charters and this was one I'll never forget," Bisson said of his most recent capture, which was reported. It was measured and tagged in the same way as the rest of the white sturgeon that Bisson and his customers catch as part of an ongoing, volunteer-driven monitoring and evaluation programme that aims to offer important data to help feed sturgeon conservation projects. It is believed that the Fraser River in British Columbia is one of the last remaining strongholds for these prehistoric bottom-feeders, which have had a severe fall in population across their range of lakes and rivers along North America's West Coast since the late 1800s. 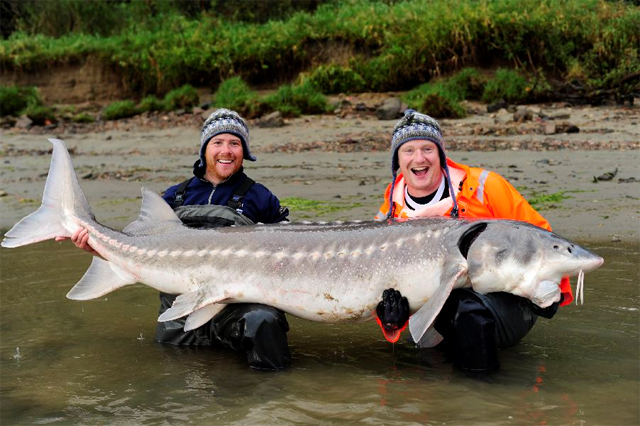 Overfishing, the construction of hydroelectric dams, dyking and drainage projects, poor water quality, as well as competition with people for food supplies, have all had a negative impact on sturgeon populations in the last century or so. Exactly how many of these giants are still prowling the dark depths is uncertain, but the number of huge breeding-age individuals may be dangerously low across much of their habitat, according to some estimates. Conservation initiatives on the Fraser River have contributed to the stabilisation of populations, although the numbers are still far from what they were in the past.

White sturgeon (Acipenser transmontanus) are armour-plated relics from the past that have kept their formidable appearance for aeons, with their structure remaining virtually unchanged for millions of years. There are no teeth on these scaleless behemoths, but they are protected by rows of bony shields, and they have a protruding mouth for hoovering up larval insects, crayfish, and other animal stuff that's been gathered from the bottoms of rivers and lakes.

White sturgeon achieve sexual maturity at an extraordinarily slow rate, and it may take up to 25 years before a female sturgeon is ready to lay eggs - something that occurs only once every 4 to 10 years. Due to their long maturation period, sturgeons lay an enormous amount of eggs at each spawning, perhaps as much as one million or more every egg-laying session.

What Is The Biggest Sturgeon Ever Caught In Canada?

11'6 (352cm) fork length and 55" pectoral girth were the measurements of this magnificent fish. It is important to highlight that, according to the Provincial government, the fork length is the true norm for measurement on the Fraser. This fish is the untagged giant Sturgeon caught till now, as well as the largest fish ever caught on a rod and reel in the history of the sport.

There is a video on Reddit that shows a giant sturgeon fish. That is too Insane! Check out some of the comments below.

"Okay I have heard that lake monsters could just be misidentified sturgeons but it never made sense until right now."

"There is a legend of The Ogopogo in Okanagan Lake and one theory is that it’s actually a sturgeon; although there is no concrete evidence that sturgeon are in the lake either."

"It's still a mystery because Scotland's local wizards placed an enchantment of invisibility over Nessy's Canadian cousin, so Japanese scientists couldn't blow her out of the water."

Bisson estimates that his most recent catch, which was safely put back into the Fraser River, may be anywhere between 70 and 100 years old, depending on the species. Allowing this ancient giant sturgeon fish, that was caught and then released, to live out the rest of its days in peace is our hope.