Nature's Wonders-A Giant Tadpole That Never Evolved Into A Frog 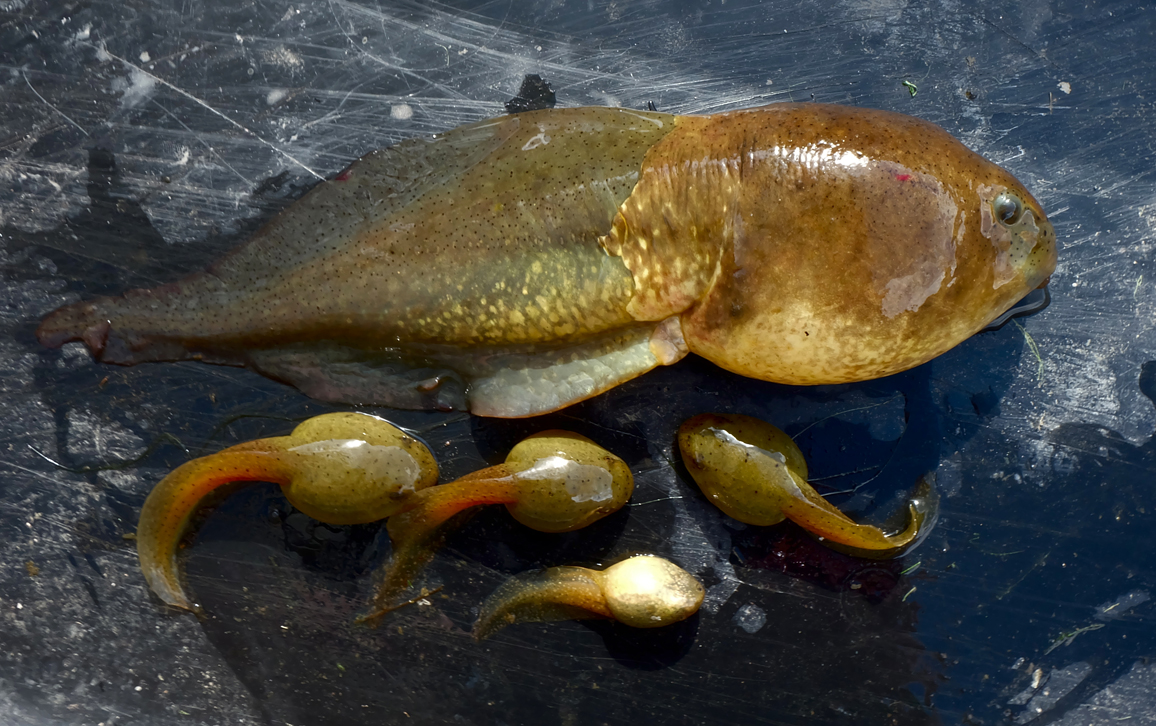 A team of ecologists discovered the world's largest tadpole in a pond in the Chiricahua Mountains of Arizona, and this giant tadpole that never evolved into a frog measured a whopping 10 inches in length. 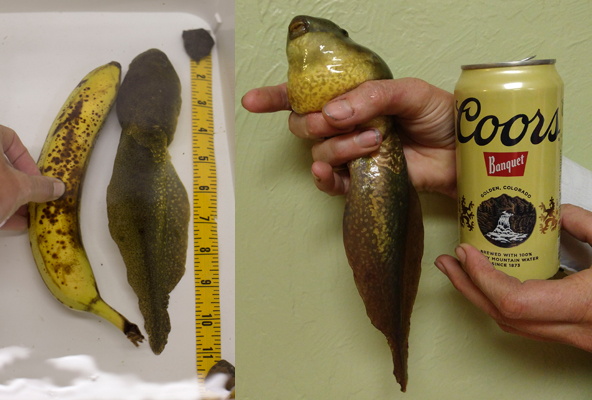 Giant tadpole and a beer size comparison; giant tadpole being measured while taking banana as a scale

An intern at the American Museum of Natural History's Southwestern Research Station named Alina Downer discovered the enormous bullfrog tadpole when her crew was draining a man-made pond as part of a habitat restoration project for the endangered Chiricahua leopard frog, according to the museum. Observing the species that remained in the muddy shallows, which Downer compared to "chocolate soup."

Downer and her colleagues assessed the situation as the water level dropped. 'I was strolling around in the pond, fishing with my hands, when I felt something huge, smooth, and wriggly—which was unexpected because the only other fish in the pond were less than an inch long,' Downer explains. Downer's first instinct as a naturalist was to be curious about the world.

“At first I thought it was a giant catfish,” she recalls, a grin on her face as she recalls the odd recollection of the creature. “Whatever it was, I knew I had to grab it.” It was difficult for her to herd the slippery creature into shallower water until she could trap it. What she thought was a tadpole turned out to be "an enormous monster of a tadpole," so large that she had to grasp it with both her hands. 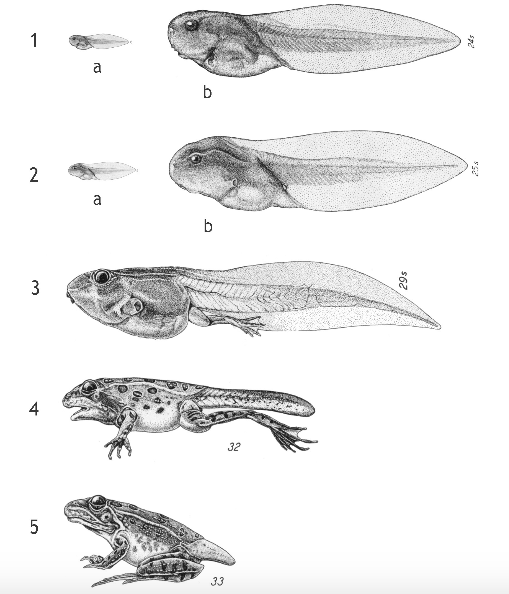 A drawing of tadpole growing into a frog

It has a circumference that is greater than that of a can of soda, for example. In terms of size, it has a head about the size of a large adult bullfrog, but it is round and blunt-faced like a tadpole, with tadpole lips instead of frog lips. A biologist with experience in the development of frogs at the University of North Carolina, David Pfennig, has examined the tadpole and concluded, “It has the features of a very young tadpole—one that might have normally only recently hatched out from the egg. But of course, it is many times the size of a newly hatched or even mature tadpole.”

A tadpole's age is unknown at this time.

The majority of bullfrog tadpoles live for two to three years before metamorphosing into adult frogs, with the majority of them growing legs after about a year in the process.

This tadpole has either grown at a significantly faster rate than its cohort, or it has remained a tadpole for an extended period of time after its cohort sprouted legs and left.

Tadpoles of the largest African clawed frogs were never grown into frogs and might live for up to eight years in their natural environment.

Do Some Tadpoles Not Develop Into Frogs?

It is possible for toads and frog tadpoles to be born with a genetic defect, which means that they will stay tadpoles throughout their lives. Tadpoles that do not have the gene that creates the growth hormone thyroxine will be unable to transform into either froglets or toadlets, according to the National Zoo and Aquarium Association.

While it is common for a tadpole that matures more slowly to grow more swiftly, Pfennig adds that this giant tadpole that never evolved into a frog is an oddity in terms of its growth rate. His prediction: “I’m guessing that this guy will never transform into a frog,” A hormonal imbalance could be the source of the stunted development and amazing growth seen in this child. "The typical developmental hormones, such as thyroid hormones, may be 'turned off' or downregulated, whilst the growth hormones may be 'turned on' or elevated," according to Pfennig.

Because of its discovery, the tadpole has become a popular photo subject at the Southwestern Research Station, where it resides in an aquarium and is fed algae on a regular basis. “I'm curious if it's going to keep getting bigger, and what the life span will be like,” Downer says. Downer, Pfennig, and other researchers at the Station intend to continue to observe the monster tadpole. Afterwards, Pfennig plans to send some tissue samples back to his lab in North Carolina in order to find out more information.

People are discussing it either in a funny way or a really informative way. Check some of the comments provided below.

"It probably has some dysfunction with thyroid hormone receptor or similar circuitry. In human puberty, amphibian, insect and even jellyfish metamorphose, the change between stages is governed by a heterodimer of thyroid hormone and another nuclear receptor that activate expression of “adult” genes and/or increase expression of genes to adult levels. This results in a rapid and systemic change in development in all of these species."

According to a tweet made on May 26, 2020, by herpetologist Earyn McGee, the tadpole titan fondly known as "Goliath" perished in 2019. McGee was the person who introduced Twitter users to Goliath in 2018.

Despite the fact that the tadpole's growth rate has decreased since it was discovered in the spring, it appears to be in good health overall. In order to resolve some of their lingering questions about the monster tadpole's life history, genetics, and development. The uniqueness of this tadpole has elicited a great deal of hilarity, but this giant tadpole that never evolved into a frog has also sparked some very serious scientific inquiry as well.