If giraffes, beds and Kent are your bag, then you’re in luck, since a hotel exists where you can enjoy all three of your passions at the same time.

Port Lympne in Kent, South England, are offering different many animal options for their stays; in fact, one of the lodges is nestled within the tiger enclosure, complete with a glass wall so you can get right up close to the big cats.

In an ideal world, tigers and giraffes and such would be left to their natural habitats, but with all of the poachers in the world and generally bad people, that’s not always an option. 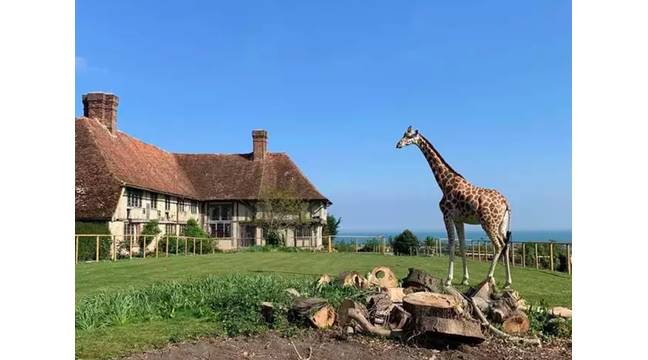 Also, like it or loathe it, zoos exist and they probably will for a long time, especially since they’re often the best option for certain animals.

Sometimes you get awful zoos that have the animals living in abject filth, and sometimes you have these wonderful places, more like reserves, where the animals can roam around and have fun. Port Lympne is one of the latter – even though it’s technically a reserve – and they look after animals such as lions, tigers, wolves and rhinos, but it’s the giraffes we’re interested in here.

The giraffe stay is located in a Grade II listed building which dates all the way back to the 15th and 16th century, and has ten bedrooms and five camping cabins, all with a lovely view.

“Get closer than ever before and make friends with your giraffe neighbours, as the resident herd peer into the lofty ceilinged drawing room, or amble up to the bedroom windows, where you may be lucky enough to feed them“.

Bear in mind that this place is not one of your budget stays, and while giraffe prices haven’t been released yet, the Tiger Lodge costs £1,000-a-night, the Wolf Lodge is £549 and the Bear Lodge costs £350.