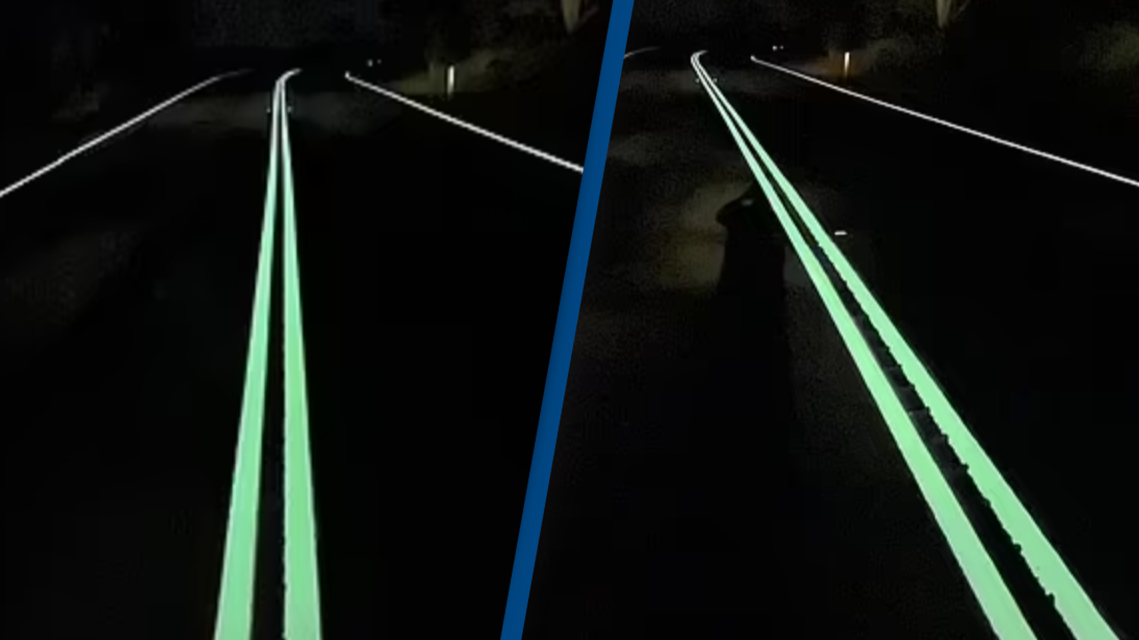 Driving at night may be extremely risky, especially on rural roads. However, one Australian business is attempting to make it safer with a concept that has been hailed as brilliant by many which are glow-in-the-dark-markings on road.

They use photoluminescence similar to the process they use in glow in the dark kids toys. The glow-in-the-dark markings on roads then reflect the headlights of passing vehicles and show the driver exactly where the road leads. 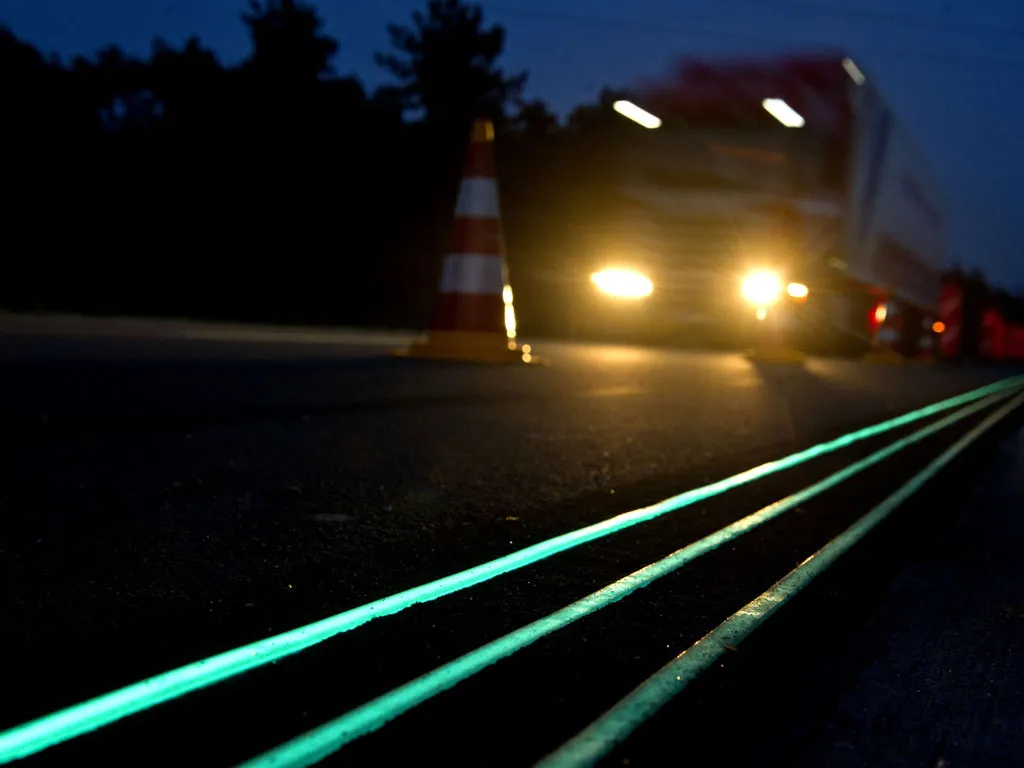 A truck running on glow-in-the-dark road

VicRoads, OmniGrip, And Tarmac Line Marking Glow In The Dark Invention On Roads

A small local business in Australia has installed a brilliant new glow-in-the-dark feature, and the results have gone viral. In May, a "trial run" of the new photoluminescent lines along Metong Road in the state of Victoria's southeast was completed by Tarmac Linemarking, OmniGrip, and Vic Roads.

The trial run is one of the 70 projects the Victorian government is working on as part of a brand-new $4 million program that looks for ground-breaking new solutions to make the area safer.

In that vein, the state government is also considering innovations that might extend the range of reflective markers as well as LED-lit pavements at junctions. The new product from Tarmac Linemarking received rave reviews from the state.

This treatment will make it easier for drivers to see the line-markings or signage and provide stronger definition coming up to intersections and curves, giving drivers more time to react and preventing them from veering from their lane. This will be particularly beneficial for people who are not familiar with driving through the area.

The Victoria Gippsland business employed photoluminescence, a natural science that is comparable to the one used in glow-in-the-dark children's toys. The cutting-edge roadways have received plaudits from drivers for being "life-saving."

Others have complimented Tarmac Linemarking in a post that has been shared more than 100,000 times on Facebook. One commenter exclaimed, "OMG I hope this is going to be Australia wide, it looks great." Another chimed in, "What a fantastic concept! These are necessary for every road.

So, exactly how does science operate? The markings make use of the same basic photoluminescence theory as children's glow-in-the-dark toys, stickers, and watches.

The so-called "smarter path" line markers, however, generate light for cars in a rather basic manner. All day long, the lines' covering retains and absorbs light. The coating may then project the light it has stored as night falls so that drivers can see the road more clearly.

Since the original idea was put into action, Tarmac Linemarking has been posting updates on their progress on social media.

Early in May, the bright lines trial run began, and the business posted on Facebook, "WOW! Tarmac has been selected to partner with OmniGrip and Vic Roads to carry out a trial run of the brand-new photoluminescent (glow in the dark) linemarking over the past few of months!"

"This will be a fantastic product for highways, boat ramps, pedestrian & bicycle lanes, and many other applications!" Tarmac Linemarking said.

The government of Victoria has also thought about adding LED-lit walkways next to intersections to extend the light lines to pavements. 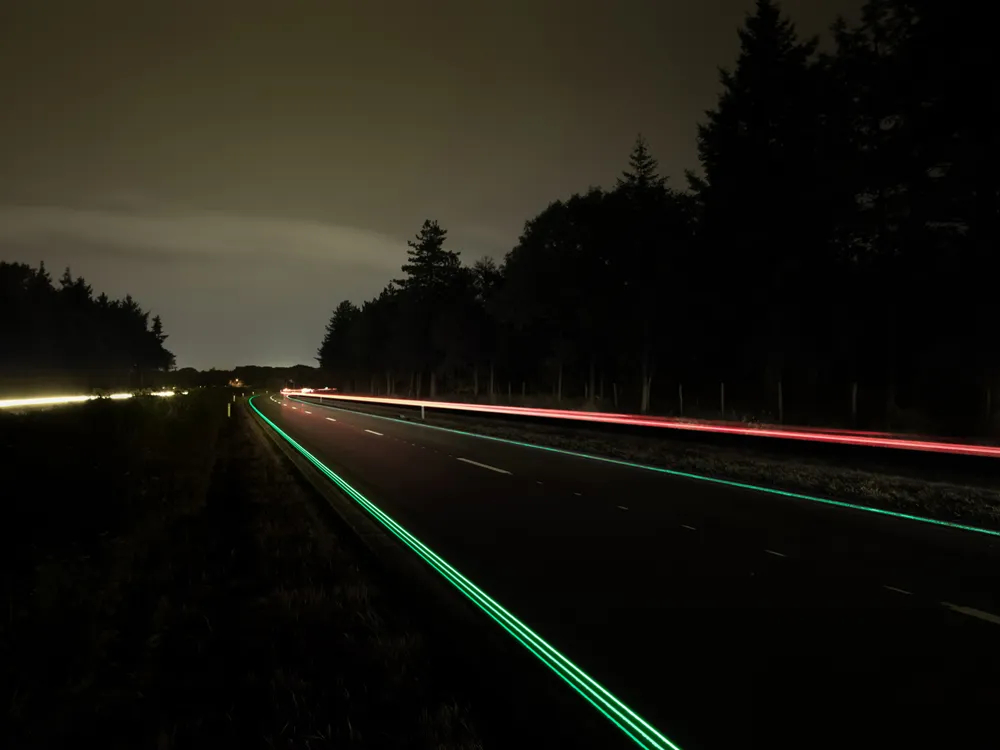 This treatment will improve drivers' visibility of the linemarkings or signage and offer sharper definition as they approach intersections and curves, allowing them more time to react and prevent lane straying.

For those who are unfamiliar with driving through the area, this will be especially helpful.

Which Companies Made Glow-In-The-Dark Road Markings In Australia?

VicRoads, OmniGrip, And Tarmac Line Marking are the Australian companies that came up with the idea of making glow-in-the-dark markings on roads.

What Is The Reaction Of People To These Glow-In-The-Dark Road Markings?

What Are The Advantages Of Glow-in-the-Dark Road Markings?

This makes it easier for cars and pedestrians to see the pavement markings and road lines as they make their way through the night to their destinations.

The Australian government is implementing a $245 million road safety initiative that includes some cutting-edge new strategies to keep everyone safe, including drivers, cyclists, and pedestrians.

The use of photo-luminescent or glow-in-the-dark markings on roads that shine at night is the program's most intriguing feature. The lines on the road seem quite normal during the day, but at night they shine as brightly as the plastic stars you used to hang from your bedroom ceiling as a child.