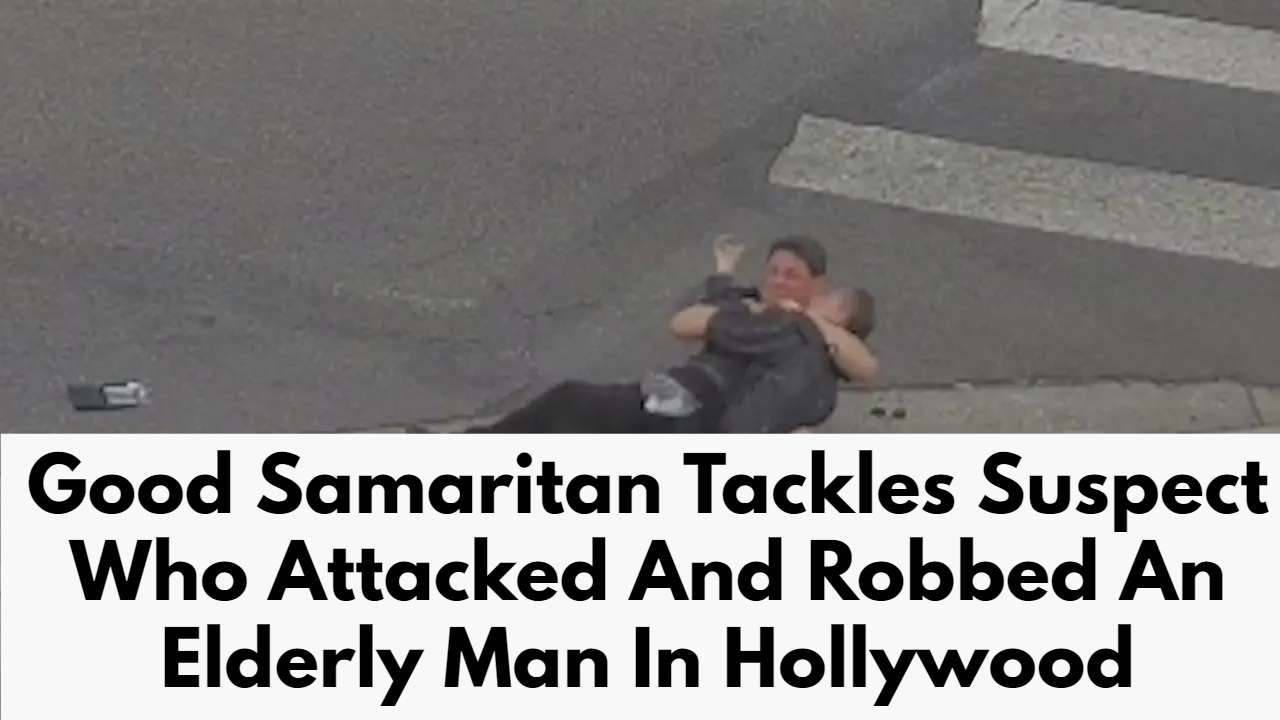 Los Angeles - A video in which a good samaritan tackles suspect who attacked and robbed an elderly man in Hollywood is going viral on social media.

Want to know more? Details are provided below.

The good Samaritan, who can be heard explaining the events in the video, saw the assault and immediately ran after the offender.

Then, the camera cuts to a street view as the narrator tackles the suspect while the suspect's wallet presumably falls from his hands and onto the ground.

The homeless man is seen punching the good Samaritan in the face before being tackled to the ground.

The video in which a good samaritan tackles suspect who attacked and robbed an elderly man in Hollywood is provided below.

On Friday (August, 2022), Amherst Technologies uploaded a video from the incident's security cameras to YouTube.

An elderly man eating lunch is punched by a homeless man in the CCTV video.

According to Fox 11, a local business owner named Tim Ratcliff quickly caught the criminal and put him in jail.

"I set the drink down on my table and I literally turned and watched as it happened," he said.

Ratcliff, who operates Shin Hollywood, a sushi restaurant on La Brea Avenue not far from the scene of the incident, claimed to have stepped outside just as it was happening.

"There was this homeless guy that we knew.

He's been here like two months, and he just sucker-punched the guy right in his face, knocked him to the ground, and he takes his cell phone and wallet and starts running away," said Ratcliff.

"I ran after him.

We get right around the corner and he sucker-punches me.

I didn't see that coming, and I tackle him and we ended up in the street a little bit."

As the thief gets closer to where La Brea and Hollywood meet, Ratcliff can be seen tackling him.

"I took him down and just waited there until the police arrived," Ratcliff said.

After the thief took the old man's wallet and phone, Ratcliff went after him and beat him.

While he was trying to hold the man back, Ratcliff's fiancee came running up to help him.

She got the money and the stolen cell phone back.

Ratcliff said that he had to hold the man down for about ten minutes before the police came to make the arrest.

"I held him there the entire time," he said.

"He was talking to me the whole time, asking, 'Hey, please just let me go,' and I said, 'You crossed the line this time. 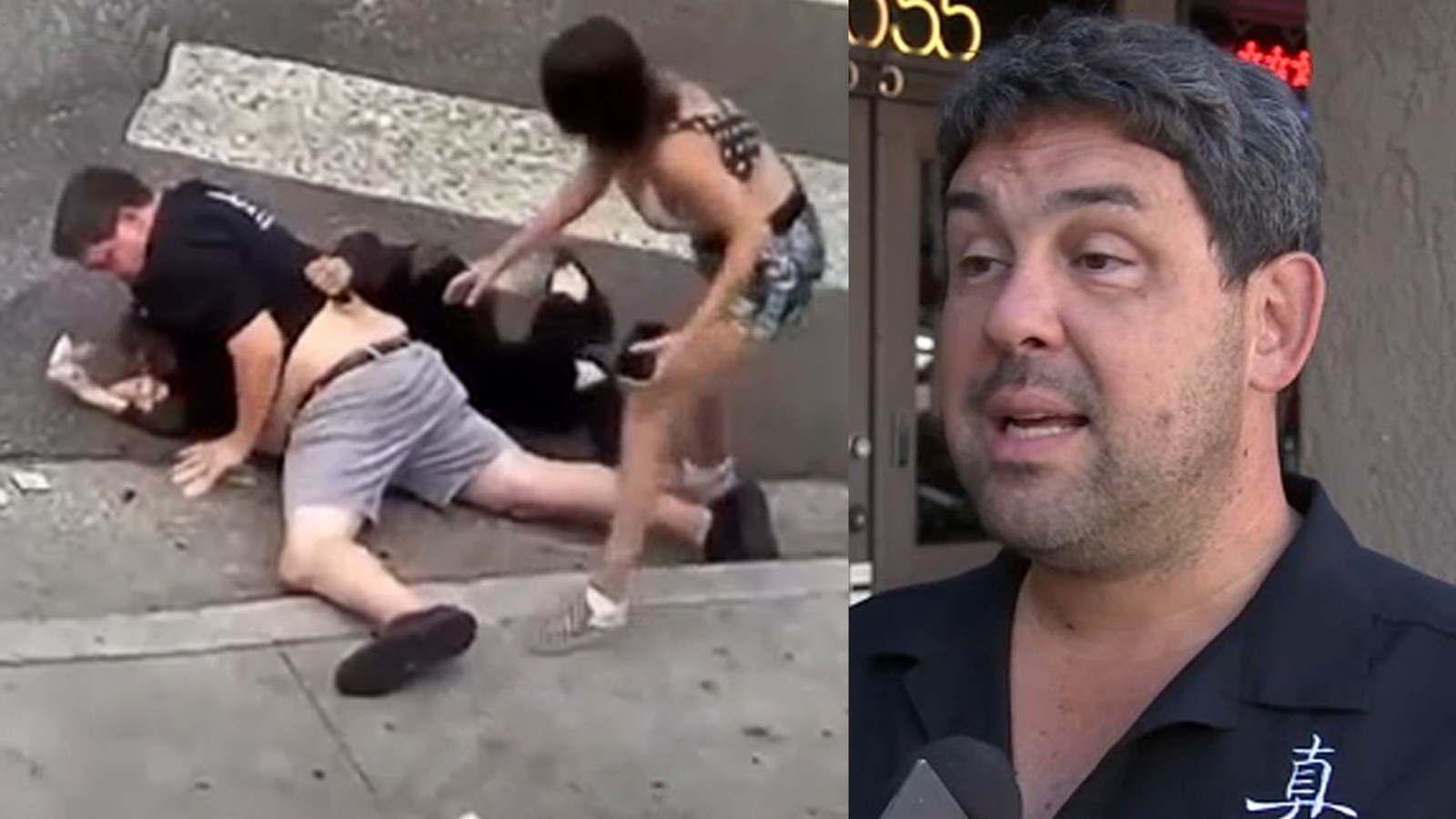 Two men fighting on a road; Ratcliff giving explanation about the incident

So police came and handcuffed him took him to jail."

"I’m not gonna lie. The adrenaline was a lot at that point.

And afterwards, it was exhausting. It felt like I had worked out the next day for quite a bit."

Ratcliff, who kept the suspect down for nine minutes, remarked.

Even though the interaction was unsettling, Ratcliff claimed he would do it all over again.

"Honestly, I didn't even think about it, it was just instinct," he said.

"It was more of something just happened that is wrong, and this old man can't do anything about it.

You're not just going to go steal something.

I couldn't not stop that from happening, so I ran and got him. Honestly, I'm glad I got him."

The LAPD makes some new changes regarding crime rates increasing in Hollywood on the same day.

These new changes are the consequence of Councilmember Mitch O'Farrell's efforts to improve public safety in Hollywood's 13th District by transferring $216,000 in district money for this purpose.

The patrols can't come soon enough, according to businessman and good samaritan Ratcliff, whose restaurant technically is not in Councilmember O' Farrell's area.

In his words, "Even one of the officers and I talked about it… they're tired of it… a lot of people like myself are tired of this type of thing happening... we're seeing more and more people just not putting up with it and taking it into their own hands… which I'm glad for… and I'd happily do it again."

Los Angeles County has reportedly agreed to give the Hollywood division of the LAPD an extra $216,000 to help fight the rising crime in the area.

The article claims that theft and robberies have gone up by up to 25% in Hollywood.

The Crime Rate In Hollywood, CA

The number of crimes in West Hollywood has gone up by an alarming 137% since this time last year, according to the Los Angeles County Sheriff's Department.

In February 2022, there were reports of about 250 "Part One" crimes, such as murder, rape, burglary, violent assault, arson, and trafficking in people. 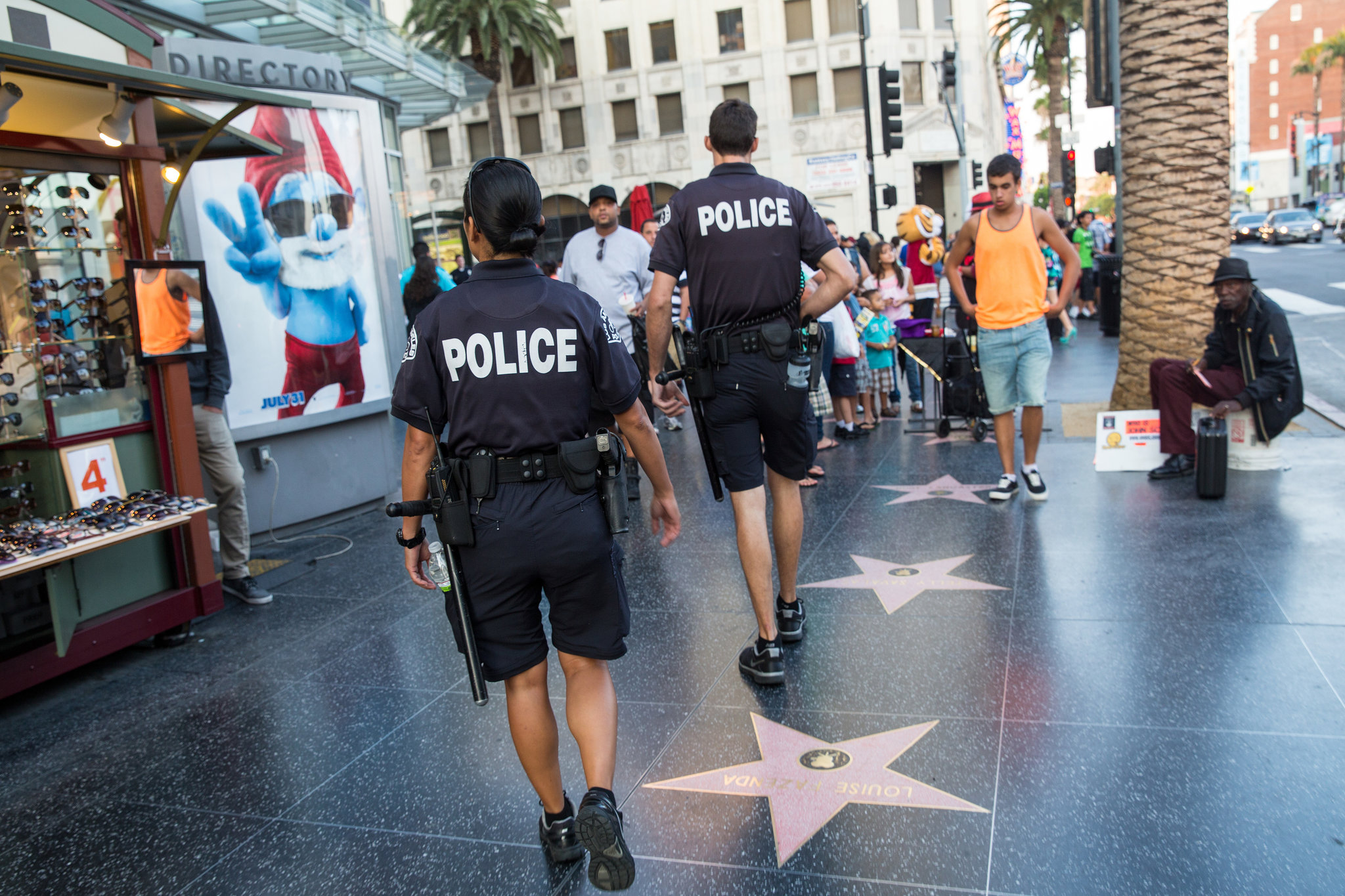 Police walking on the Walk of Fame area

According to KTLA, 105 of these occurrences were reported in February 2021.

Since LASD started keeping track of those statistics, this number also represents the greatest monthly total of offenses that are classed as "Part One."

According to the Los Angeles Blade, an LASD spokesman informed commission members,

"We continue to conduct our saturation patrols, plain clothes operations, and other types of operations with the LAPD and entertainment policing team."

The representative continued by saying that they are "focusing on the Westside, because a large number of thefts have been occurring there."

WeHo has a reputation for being a pickpocket hotspot.

Even the popular neighborhood restaurant Rocco's has a notice warning that pickpockets are swiping phones in the WeHo district.

Remain vigilant and avoid keeping your phone in your back pocket.

Keep an eye on your purses and always keep them closed.

This is good advice, since pickpockets often go to pubs, clubs, and other places where people go to have fun in WeHo.

Even though many things don't get reported, the LASD West Hollywood Station said that in February, 34 stolen cellphones were reported in WeHo.

Theft of a cellphone is considered a major theft, according to the Sheriff's Department.

Five phones were taken on the evening of February 5 from the 8900 block of Santa Monica Boulevard.

The next weekend, eleven further phones were taken from the same location.

The Los Angeles Times quotes Kate as saying, "Rocco’s does what they can with making announcements, but they obviously need to take further action as it seems they are not doing enough."

She added, "The second time was mind-boggling; I took my hand off my bag at the bar for two seconds and when I looked back my phone was gone."

Three suspects were detained out of the 34 reported stolen phones in February, with only two of them being pickpocket suspects.

Security expert Russell Stuart, owner of Force Protection Agency, told KTLA that "the only reason why you're going to come this far, into this area, is either a) you believe you're going to get away with it, or b) you're not going to get punished for it and the stats are indicating that."

In response to L.A. District Attorney George Gascon not punishing minors, Stuart continued that he thinks gangs are responsible for the crimes and are sending younger offenders to carry out their orders. 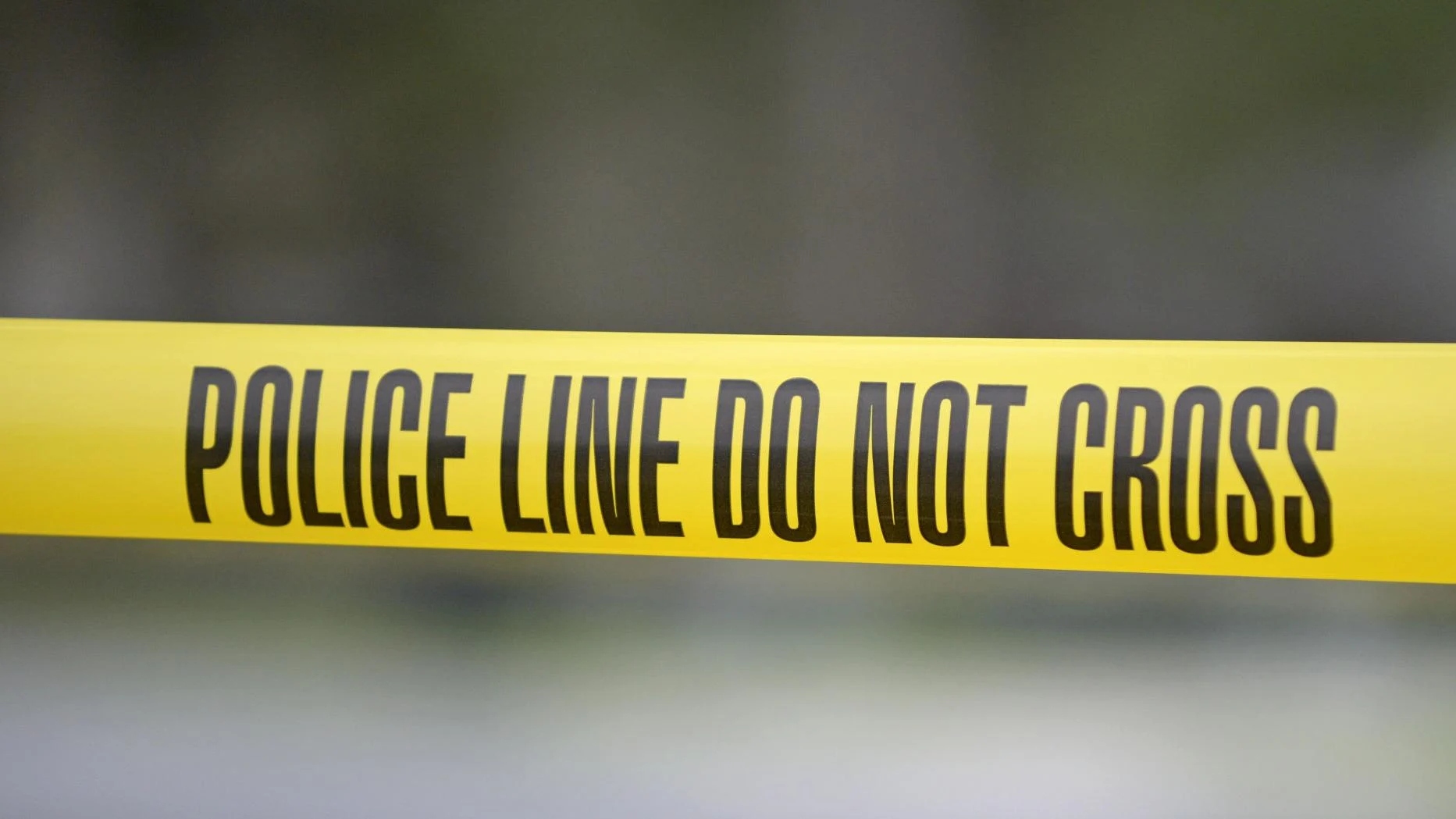 "Police Line Do Not Cross" text written on a yellow band

What Is The Most Common Crime In LA?

This has the highest rate of property crime among the 50 states and is significantly higher than the national rate of 2,110 per 100,000 people:

Is Crime In LA Getting Worse?

Yes, LA crime is getting worse. Since 2020, violent crime in LA has increased by 16%, with homicides rising by 34% and property crimes rising by 8.5%.

The event, in which a good samaritan tackles suspect who attacked and robbed an elderly man in Hollywood, happened on the same day that the LAPD received approval to increase patrols in the Hollywood neighborhood in response to an increase in crime.