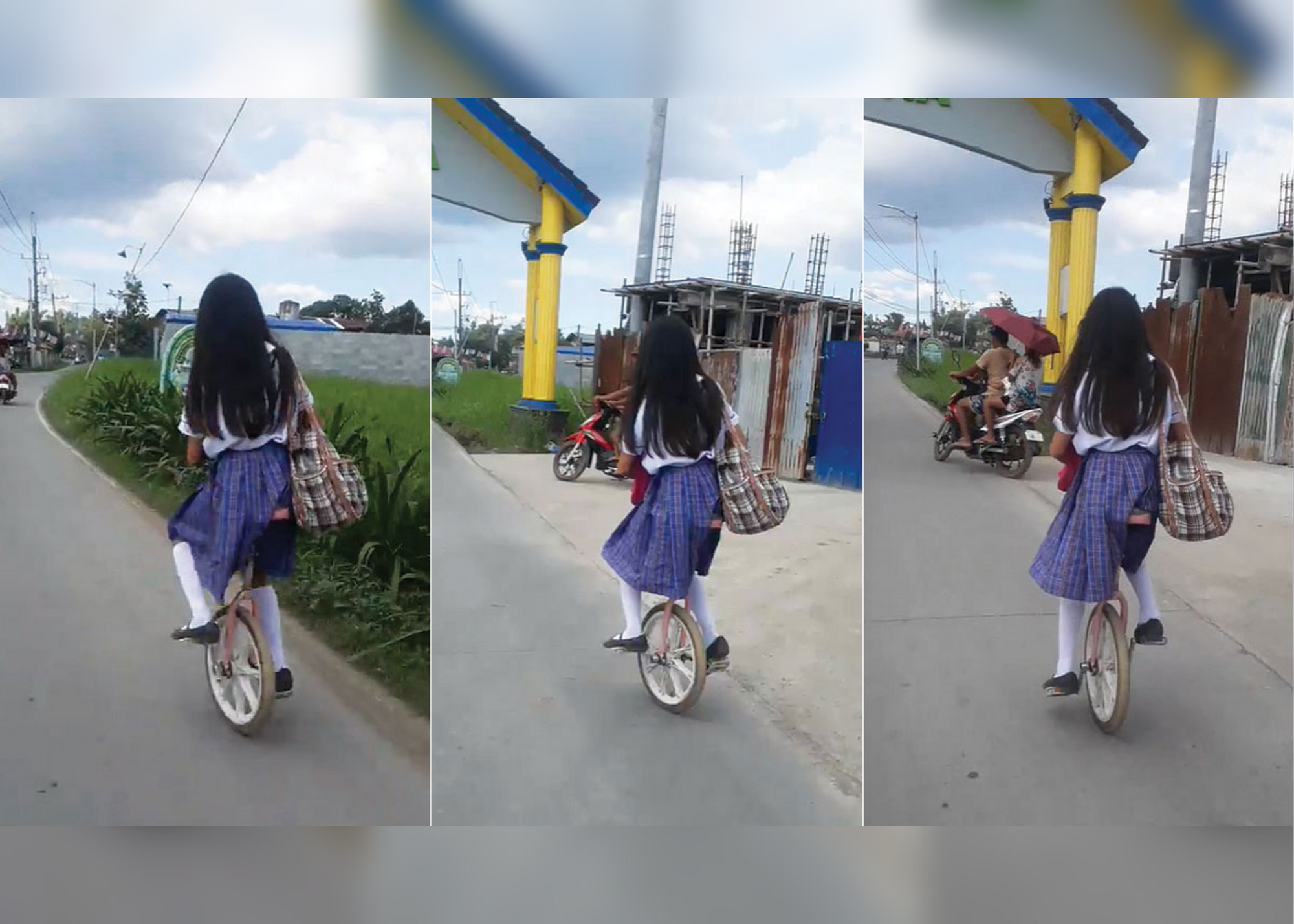 If we are going to talk about balancing, a 12-year-old girl from Bulacan, Philippines, will definitely take the lead! Consider the video uploaded by Jonathan Paa. A Facebook user spotted a Grade 7 student riding unicycle to school everyday just to save money. This girl can be seen effortlessly balancing herself on the unicycle while carrying heavy stuff.

The 12-year-old girl from Bulucan, Philippines, was later known by the name Hannamichi Jeanky Lomoljo. This story is so interesting to read! Why? Most of the students typically ride tricycles, bicycles, or four-wheeled cars to school, but this student uses only one wheel!

It's an incredible display of talent. You may have seen the girl had her lunchbox in her left hand and her school shoulder bag slung over her right shoulder while using her own unicycle.

In the video's description, Jonathan Paa wrote: "I hope someone could help her. This is because she is such a diligent student." Don't worry, she arrived safely on her way to school. Jonathan added that he was available to spend time with the girl's family members.

This happened immediately after he shared the video on Facebook. He explained that the student's father was a unicyclist who had taught his own children. Why is she so skilled?

The news reporter from GMA News, a news authority that delivers accurate information to Filipino citizens, interviewed Hannamichi. The video below shows that the young girl cried while explaining the reason why she uses her unicycle every day.

The man who recorded the grade 7 student riding a unicycle said in the video:

"Isang gulong lang oh! Pauwi na ang estudyante. Ang galing oh! Isang gulong lang oh. Panis kayo diyan! May dala pang bag diyan, partida ... Balance oh!" (She only has one tire! The student is going home. It's awesome! You've got nothing on her! She was also carrying her bag while maintaining her balance.)

On the other hand, Hannamichi in the interview shared:

"Kailangan ko talagang magtipid kasi po kung mag-tricycle ako pauwi, wala po kaming makakain." (I really need to save money because if I spend it on a tricycle to go home, we won't have anything to eat.)

Hannamichi learned to ride from her father, who was a performer in the circus in the past. She stated that she spent approximately 30 to 45 minutes pedaling her unicycle before arriving at her school. So her father wishes to purchase a bicycle for Hannamichi's safety and comfort.

However, they cannot afford to purchase a comfortable bicycle because their father's salary as a company driver is insufficient to cover their daily expenses. Her father's real name is Rogen Lomoljo, who admitted that he is incapable of giving his daughter a comfortable mode of transportation.

Hannamichi, according to his mother, never voiced complaints about her circumstances. She also failed to mention the importance of owning a nice, comfortable bicycle for riding to school every day.

The video above garnered more than 5K comments, but we will not get all those. Here are some remarkable comments found in the comment section of the video:

On the other hand, Facebook user Maricel Duya was so sad that she couldn't help but compare Hannamichi to her own children. She wrote in a comment that Hannamichi is a good daughter. She said:

I've been living abroad for almost 8 years so that they can go to school and not have to deal with life's problems. My kids don't appreciate what I do for them here, so they only cause me trouble. They always complain instead of being thankful for the things I give them.

Hendrix, a Youtube user, stated: "I've always been amazed with kids who understands their parents and and tries to make the best out of it. At a young age and having that mature mindset will definitely benefit her in the future. The parents did their part. Team work as a family is key."

Moreover, Otyza mentioned: "For me. Unicycle is more convenient to use as it doesn't need a space and can carry anywhere. She can use her talent someday. Her parents must have been proud of her , She is doing her best to help her parents."

How To Ride A Unicycle

Here are some of the most important tips from the video on how to use or ride a unicycle:

How Long Does It Take To Learn To Ride A Unicycle

You don't need any special skills to learn how to ride a unicycle; all you need is a desire to learn. It takes practice and can be difficult at first, but you can do it if you want to. Unicycling takes about 10-15 hours to learn; that's about an hour a day for two weeks.

If you want to learn how to ride a unicycle, there are four things you should be aware of.

Safety Gear: Unicycling isn't usually dangerous, but like riding a bike or any other physical activity, you might fall every now and then, especially when you're learning. Wearing a helmet, wrist guards, sneakers or running shoes, and pants is very important.

Where to learn: The best place to learn would be a smooth hallway with handrails on both sides. It was hard to find! Look for a space that is free of things that could get in the way. It must be smooth and level because any pebbles or dips will throw you off when you start.

In general, tennis courts and school yards are good. If you are lucky enough to live near a juggling or unicycling club, they usually meet in a hall or gym and can teach you how to ride.

Height of the seat: Your legs should be almost straight when seated on the unicycle, with the heel of one foot on a pedal in its lowest position.

The price of a Veteran Sherman-S Electric Unicycle is currently £3,245.83 (3694.25 USD). The very first wheel by Leaperkim to feature suspension! This electric unicycle comes with a 2 year warranty that is supported by PET workshop, a 3600 watt-hour battery, Samsung 50E 21700 cells, and a 3500 watt motor.

What Are The Benefits Of Riding A Bike To School?

Children who walk or bike to school have higher levels of physical activity throughout the day, which helps them meet the recommended 60 minutes of activity per day. This level of activity helps keep kids from getting fat and keeps their bones healthy.

Which Cycle Is Best For Going To School?

What Are The Advantages Of Using A Bicycle In The City?

Bicycles have a lot of benefits. They are good for your health, cut down on traffic, save you money, take up less space, and are a good way to get around without using any fuel or putting out any carbon.

Many people on social media were moved by how determined a young student was to keep going even though life was hard. With that kind of eagerness and skill to attend class, the student is sure to go far in life.

Later, the 7th-grade girl said that she had also fallen off her unicycle while riding to school. But, after the video went viral, a number of people sent her a new bike and extended a helping hand for her school needs.