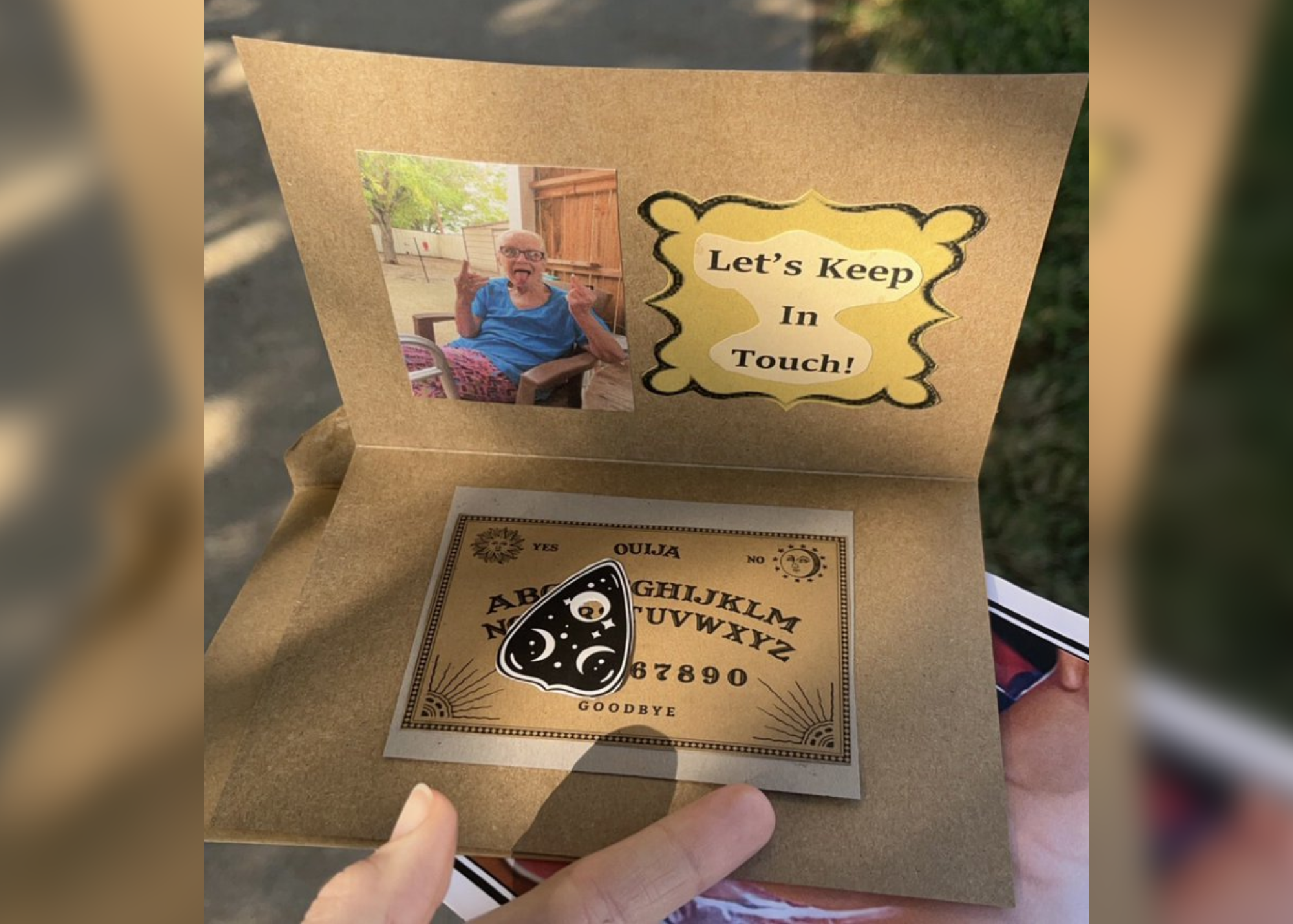 A grandma who passed away from cancer gives Ouija boards at her funeral to "keep in touch." The deceased is known by the name Jodie Perryman, who is 81 years old and died of cancer on October 1. She left her family and friends who went to her funeral on October 16 something to remember her by: a note with a picture of her and an improvised Ouija board.

The talking board, also known as the ouija board, is just a flat board with a particular arrangement of numbers and letters that, in theory, can be used to communicate with the dead. A flat board with the words "yes" and "no" in the uppermost corners and "goodbye" in the bottom, the alphabet letters arranged in two semicircles above the numbers 0 through 9, and a "planchette," a teardrop-shaped device with a small window in its body that is used to move around the board.

Her 20-year-old granddaughter Gracie posted a picture of the Ouija board on Twitter that included a picture of Jodie sticking her tongue out and raising her middle fingers. There was a tiny note next to it that said, "Let's keep in touch!" Gracie captioned her Twitter post: "Received this at my grandma's funeral. What an icon. " Her posts accumulated more than 75K, 6K retweets, and 731K likes.

Gracie said that when about 30 to 40 people started opening their gifts at Jodie's funeral, the room filled with laughter, even though funerals are usually sad and solemn to honor the dead.

Gracie Perryman, who lives in Austin, which is about 3 1/2 hours south of Breckenridge, said that the gift from her grandmother was "hysterical." She remembered that Jodie, who had cancer and died, was funny and had a good sense of humor. She said: "She was hilarious. She had a great sense of humor and a huge heart. She loved her family. And she just took care of people around her. She was a great woman. "

Meanwhile, Jodie promised on Facebook in August, before she died, that she would give each of her funeral guests their own Ouija board. Even so, Gracie didn't think she would be able to make it through. She said that Jodie's jokes had always been the best part of any party. She said that her late grandmother was a "firecracker" who could "outwit anyone."

How To Use An Ouija Board?

Ouija boards are mysterious things that are kind of like board games. But they are also like a palm reader and a doorway to another world. It's not too difficult to use an Ouija board if you've never done so.

Your fingers will be placed very lightly on the triangular object, also known as the planchette, whether you're using it alone or with a group. In the first round, you'll elect a leader who will pose the questions.

Once a leader has been chosen, you will ask a spirit to manifest so they can assist with your inquiries. The planchette will move through the letters on the board to spell out answers after you ask your first question, or it will simply point to "yes" or "no" in its upper corners. When the spirit, or whatever you want to call it, decides to leave, you'll press "goodbye."

You might wonder: who is driving this? Well, you can assume you're talking to your great-aunt or a bored spirit who has nothing better to do than answer your most personal questions. Or, that strange movement could be caused by the ideomotor phenomenon, which is what a Danish study found to be the case.

Use It With Others And Not By Yourself

If you really wanted to, you could, but it's best not to. It's better to call in spirits with a group of people because it has a grounding effect, provided you think you're connecting to spirits. Moreover, it is less spooky!

Use It In A Silent And Dark Environment

Yes, that makes it seem eerier. However, it also provides a calm space for the spirit to enter. As a result, switch off the TV and even your phones. Setting the mood and eliminating distractions are crucial. Do you really want the ghosts to come by?

Avoid Using It In Cemeteries

Using an Ouija board in a cemetery is comparable to trying to have a conversation with a million intrusive strangers. You don't want to interrupt this conversation when you're speaking with a spirit, though. Keep it safe and direct. The random ghost that adds to your spiritual connection can be harmful.

Possessions Of An Ouija Board Captured On Camera

10 Ouija Board Possessions Caught on Tape

Friends and family of Jodie used the Ouija board that was given to them. But when she and her roommates tried to talk to her deceased grandmother through the Ouija board, it didn't work. She laughed and said, "It's just paper. We tried but to no avail."