Rouketopolemos - The Greek Rocket War For Celebration Of Easter 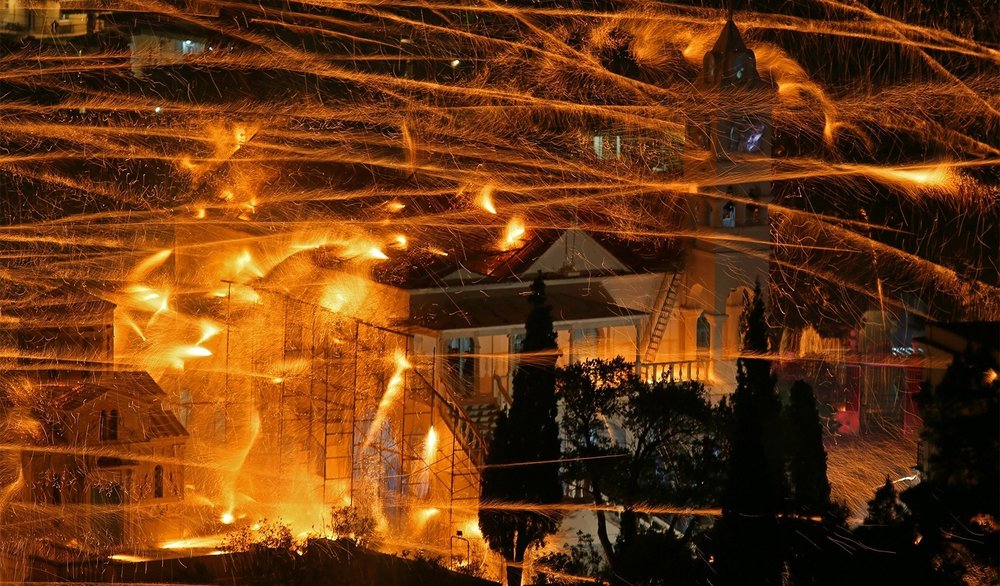 Every year, while parishioners attend mass, two churches on the tiny Greek island of Chios celebrate Easter by firing rockets back and forth in the direction of the bell towers, known as the Greek rocket war.

The Greek word for "rocket battle" is "rouketopolemos," and it refers to an annual Easter celebration on the island of Chios. At midnight on Holy Saturday, the town of Vrontados brings back one of the most beautiful but also dangerous Easter celebrations.

This strange ceremony, which has been going on since the Ottoman Empire, is being participated in by two opposing parishes in the village. The two churches, which are 400 meters apart and on opposite sides of a hill, fire thousands of homemade rockets at each other's tower bells.

These homemade rockets are constructed throughout the year for this spectacular event, which draws thousands of spectators. The rockets are made of wooden sticks that are stuffed with an explosive mixture of sulfur, nitro, and charcoal.

More than 200 people from both parishes are involved in the preparation, which begins after Christmas. They are split up into groups of 4-5 people, and each group is given a particular assignment to fulfill. The night before Holy Saturday, the rockets are put on platforms with grooves to make sure they go in the right direction.

For the occasion, the church buildings and the neighboring structures have been boarded up and secured with metal sheets and mesh. The sky fills with vibrant sparkles and the clicks of hundreds of burning rockets as soon as the bells ring at midnight, commemorating Jesus' resurrection. 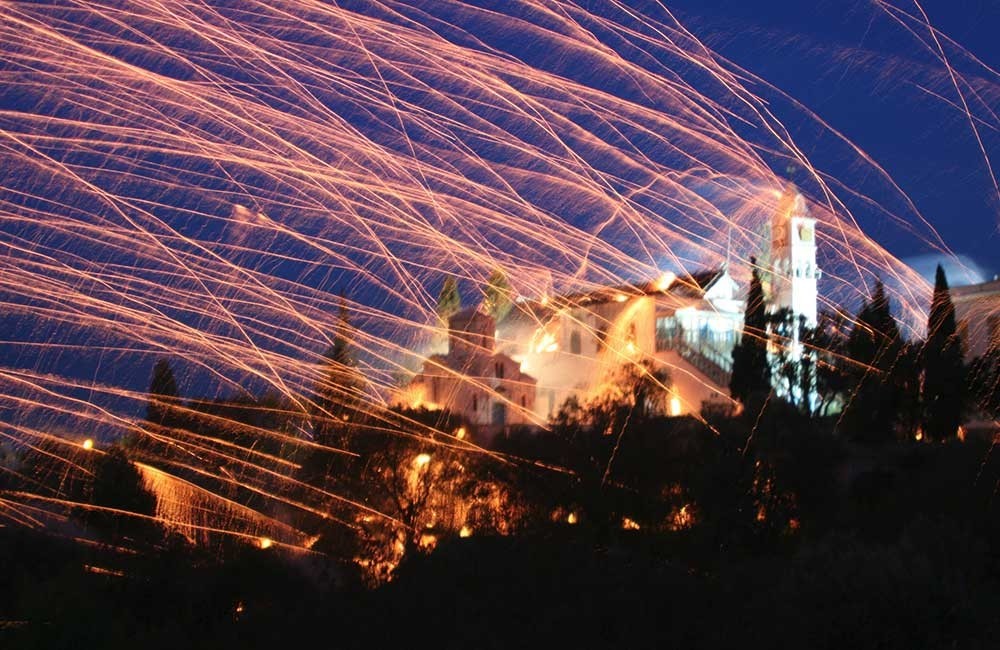 Rocket war is being held in chois

Each parish always claims victory over the other when the rockets that have successfully hit their target are counted on Easter Sunday, but ultimately, both parishes agree to settle the score the following year.

Even though this strange practice has annoyed a few locals, it has brought international attention to the town and brought in a lot more money from tourists.

How Is The Success Of The Greek Rocket War Announced?

Of course, whoever rings the bell of the rival church wins. But the outcome always seems to be a tie, necessitating a new conflict the following year. The "rockets" are actually gunpowder-mixture-filled wooden sticks that are launched from specialized platforms.

Making them takes the entire year for the villagers. Between the two churches, 60,000–80,000 rockets are launched. The churches of Agios Markos and Panagia Erithiani participate in this Rouketopolemos event.

There are 5,300 people living in the village, which is on the Greek island of Chios. It has a long history of merchant seafaring and is home to a number of important Greek ship owners. 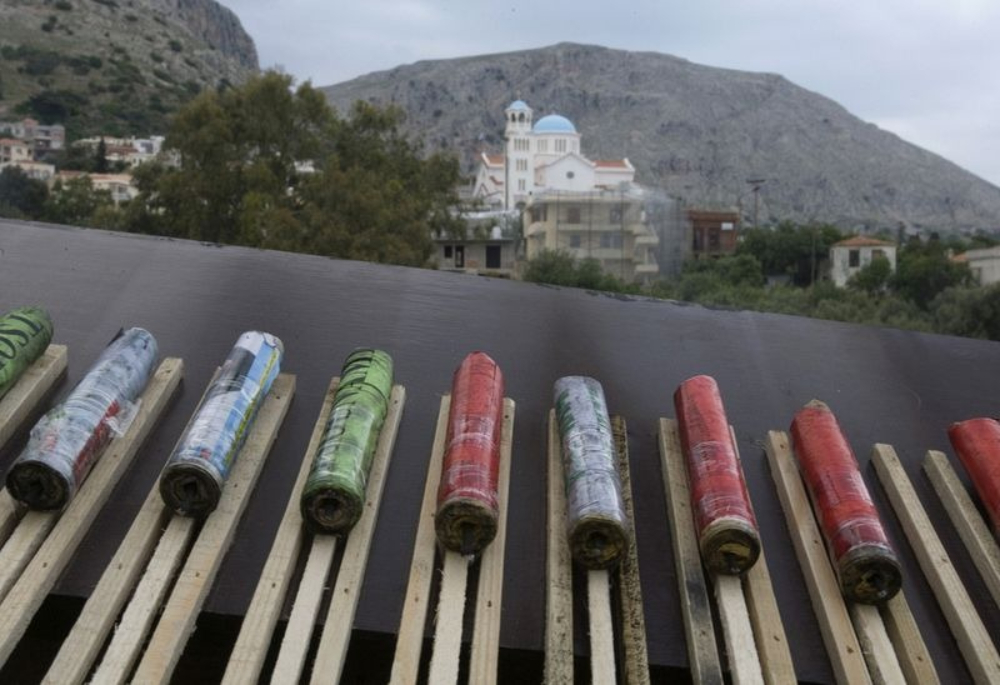 The origins of the event are several. The festival seems to be a twist on the Greek tradition of setting off fireworks before the Orthodox prayer at midnight on the Saturday before Easter.

Another idea dates the incident to the Ottoman Empire, when the situation was far grimmer and real cannons were used. The villagers in the nineteenth century wished to celebrate Easter without worrying about harassment during the Ottoman Turkish occupation.

In order to keep the Turks at bay and allow the devoted followers to attend Easter services, members of both churches came up with the idea of staging a fictitious conflict with cannons. The Turks then removed the cannons out of concern that the natives would use them to revolt.

According to rumors, the villages broke tradition in 2016 and cancelled the festival entirely due to cleanliness and safety concerns. Each year, in anticipation of the "rocket war," the churches themselves and neighboring structures must be boarded up and fortified with wire mesh. The festival appears to have started up again since then and is still a big magnet for tourists.

How Is The Greek Firework Battle Celebrated?

The annual celebration, known as "rouketopolemos", sees parishioners from Aghios Markos and Panagia Ereithiani fire the handmade fireworks at each other's church bell towers. The winning village is the one whose church scores the most direct hits on the other's.

Do People Get Hurt During The Greek Firework Battle?

Seven out of every ten youths injured by fireworks are between the ages of 10 and 14, with 93 percent of them injuring themselves. 79 percent of the injured young people were injured as a result of fireworks explosions in their hands.

What Year Did The Greek Firework Battle Start?

Every year, a battle takes place between two churches - a tradition that dates back to 1889. People carry fireworks to the roof of Saint Mark's and Panagia Erithiani to set them off in the direction of one another. The winner is the first to hit the opposing church's bell tower.

Every easter, in a small island of greece, there is a Greek rocket war every year. Rockets and churches don't typically go hand in hand, but in a little Greek community, they have for more than 125 years.

Even though this stunningly beautiful activity has its roots in a much darker time in history, it is now a major tourist attraction and a major source of income for the area.